For most, Among Us is a game fraught with tension, with lies and deceit. It pops 4-10 players onto a spaceship which needs some tuning up for departure, but one or more folks is a killer bent on murdering everyone. A chat function ensures each game descends into psychological warfare. Bodies are reported, emergency meetings are called, accusations fly. Everyone votes, then someone gets ejected into space.

Meanwhile, I sit quietly in chat. Sure, murder is very exciting, but my mind is elsewhere, on the oh-so-satisfying rewiring that needs doing.

It’s not that I don’t feel the tension, I do! Among Us is one of those rare multiplayer games where I find it’s more fun being an innocent member of the crew, a hunk of meat waddling around a space facility than an apex predator with all the power. I quite enjoy getting the jitters as I brush past people in corridors, or join a group and watch as everyone disperses until it’s just me and this one other person, squinting in suspicion at each other through our visors.

These are brief bursts of fear, though. Just enough to peel me away from tasks, to wake me from my peaceful mundanity. You see, I’m a well-oiled, ruthlessly efficient job machine who simply will not be stopped. Okay sure, death does come swiftly when I’m pottering about sometimes, but more often than not I’m mid-job when a half-eaten corpse is discovered, so I end up downing my tools in bemusement as chat explodes.

I lead with the classic “??”, follow it up with the old “where”, and then shamelessly vote for whoever other people accuse. I scan the chat, “Orange”, “def orange”, “imposter orange I saw”. Cool, orange gets my vote! Then I wave them off as they float haplessly into the cold, unfeeling expanse of space. Moments later, “Orange was not the Imposter”, flashes up on the screen, and I blankly stare at my monitor. I best crack on.

Back in the day I used to spend a lot of time with MMOs, first Runescape, then my attention inevitably turned towards World Of Warcraft. I could never decide which class I wanted to play, so I’d create loads of characters and power through their starting areas over and over again just to get a feel for them. I took comfort in the simplicity of these tasks and how familiar they’d become. These quests became little pockets of relaxation, my brain on autopilot as I grabbed 10 kobold candles, handed them in, and watched the XP bar rise. I lived for that sweet dopamine rush. 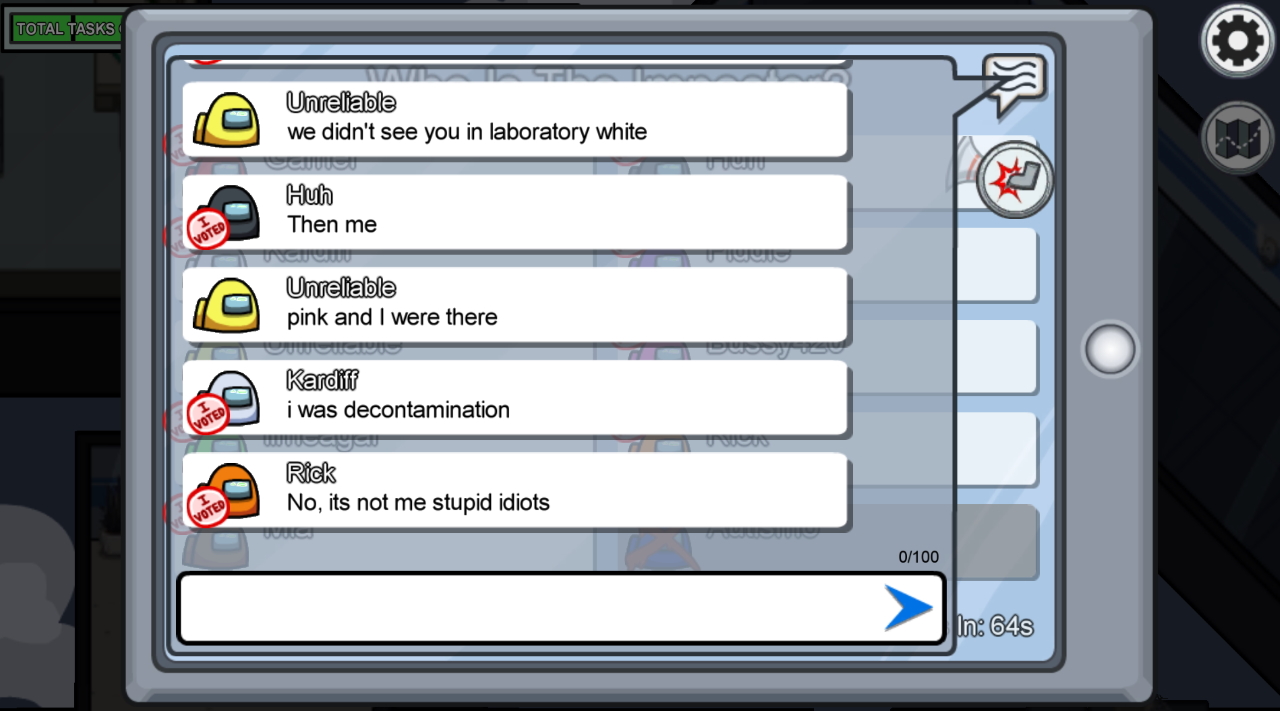 When I play Among Us and sweep leaves, or scan bar codes, it stirs up the same feelings. As soon as I'm in the game, I click on the map and I beeline towards the exclamation marks without a moment's hesitation. I'm back baby, back sweeping up quests in Lumbridge or Dun Morogh. They’re delightfully simple, so delightfully mundane, and I can watch the bar rise. Granted, it is not an XP bar, but it delivers the same hit.

Actually, you know what? Just get rid of all the imposter malarkey. Give people like me (probably just me) a big map and an endless string of jobs. I say this because when my assignments do run dry, I'm dragged into the real game and there's no zen, zero chill. I cannot handle it.