Welcome back to the wasteland, you raving bunch of lunatics, because today's the day that Rage 2 finally blasts its way onto PC. Filled to the brim with tongue-waggling goons and mohawked, tattooed hoodlums with very itchy trigger fingers, the successor to id Software's 2011 post-apocalyptic shooter is now bigger and boomier than ever, thanks in no small part to their collaboration with Just Cause devs Avalanche Studios and their mastery of very good-looking explosions.

But will Rage 2 make your PC explode in equally spectacular fashion? To help answer that question, I've been testing the game with a bunch of today's best graphics cards in order to find out what kind of performance you can expect, and how to get the best settings and the best speeds no matter what GPU you've got whirring away inside your case. Let's get cracking.

Cast your eye over the recommended specs, however, and lower-end graphics card owners may start to panic a bit. While the Intel and AMD CPUs shouldn't be too much of a problem for most people, you might think a GTX 1070 or Vega 56 seems a bit steep for a game like this - and you'd be right. 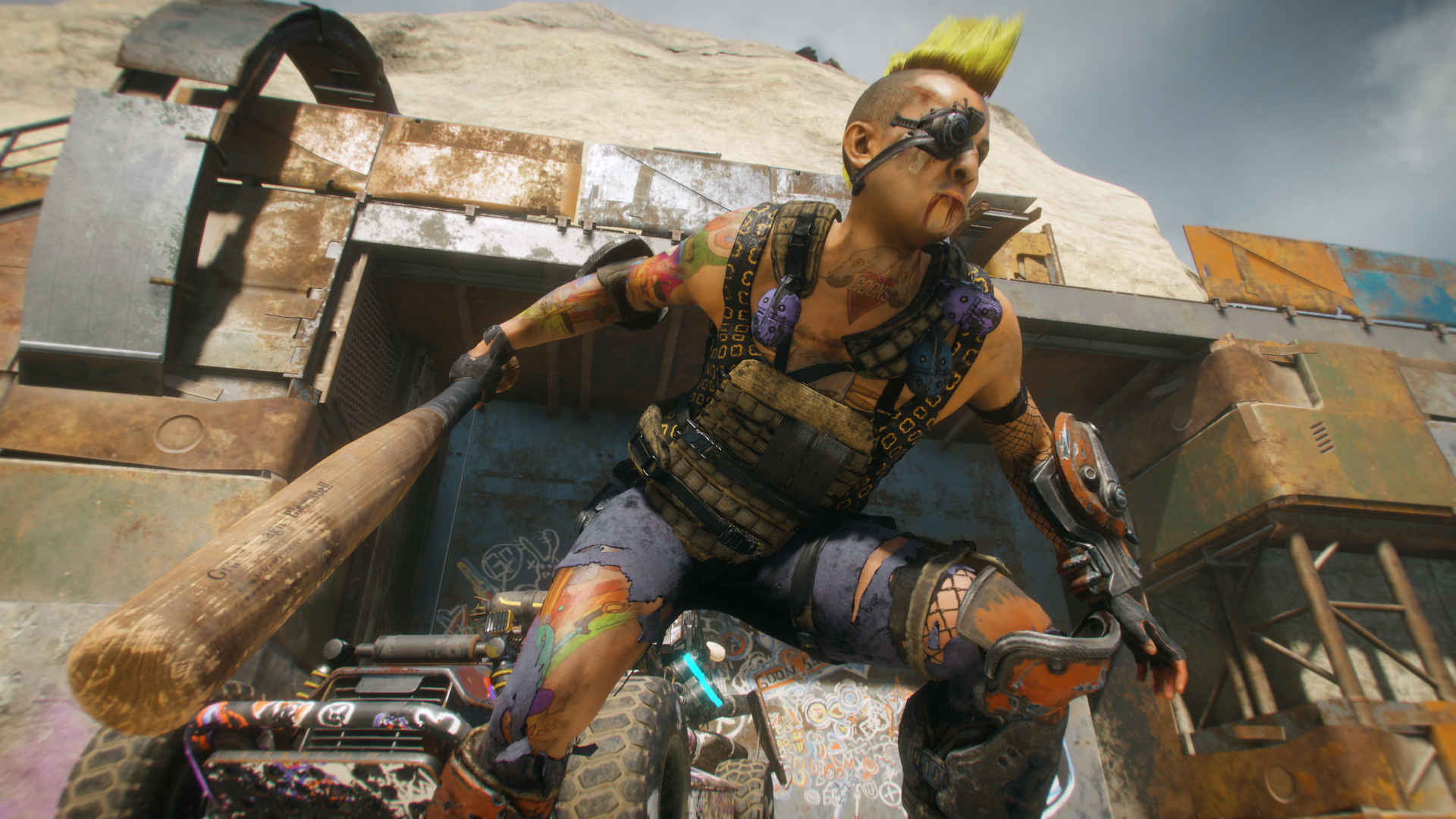 Fortunately, I'm here to tell you how you can still get 60fps on these lower-end graphics cards at 1080p without necessarily compromising the game's overall detail quality. After all, there's plenty to admire out in Rage 2's wasteland, so it would be a shame not to see it in all its fluorescent, punk-infused glory.

Rage 2: How to get the best settings on PC

Rage 2 has four main graphics settings - Low, Medium, High and Ultra - and you can see from the pictures below what they all look like in practice (click to enlarge). As you'd expect, Low is a bit lean on lighting and overall detail, Medium has a similar level of detail to Low but more advanced lighting, while High has both in spades. Ultra... well, there's actually only a single setting separately High from Ultra (Geometric Details), which is why you probably can't see much difference between them.

Fortunately, there are several things you can do to get that sweet 60fps frame rate without dumbing down that all important Geometric Details setting. One of the easiest things to do is make use of Rage 2's Resolution Scale option. This renders fewer pixels in order to increase performance, and you can either set it to Automatic or choose a manual minimum resolution scale yourself. 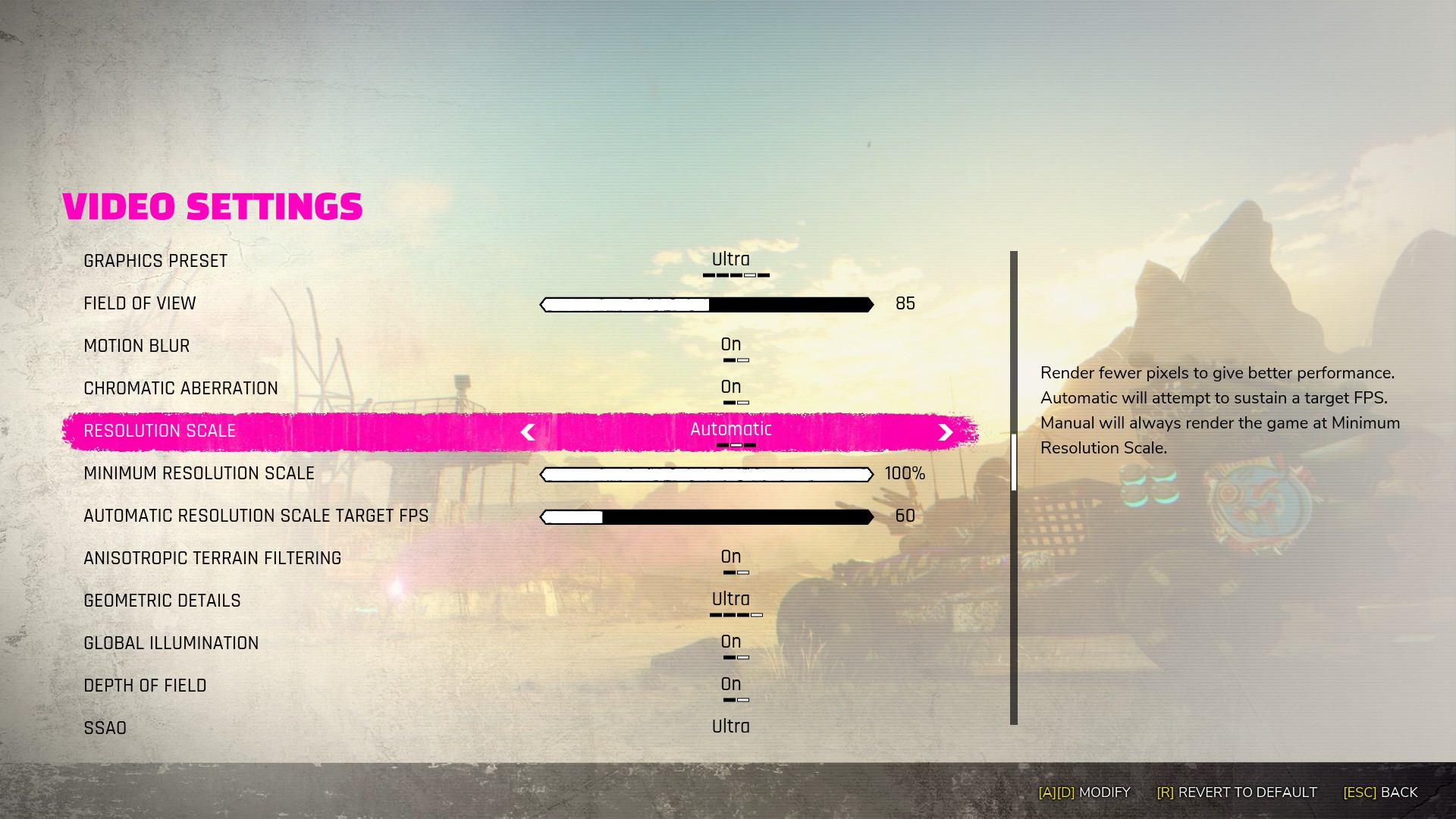 If you'd rather maintain a crisp resolution of 1920x1080, however, then the next best thing to do is to lower Rage 2's Anti-Aliasing (or, AA) option and its SSAO setting. Anti-aliasing, as you may already know, is the thing helps smooth out jagged edges, making them look more like straight lines than sharp flights of pixel-shaped steps, while SSAO stands for 'screen space ambient occlusion', which is all to do with the lighting detail around in-game objects.

On the Ultra preset, AA is set to FXAA + TAA, while SSAO is (unsurprisingly) on Ultra. However, if you turn down the AA to regular FXAA and SSAO to Medium, then GTX 1650 owners can get that 55-60fps again without having to fiddle about with the Resolution Scale feature. Here's what that looks like in practice (click to enlarge):

Those of you playing with a GTX 1050 Ti, on the other hand, may still need to employ a bit of resolution scaling in order to achieve the same kind of speed here, however, as even my AA / SSAO method only managed to bump up the frame rate to around 45fps from its original Ultra speed down in the high 30s (or between 36-42fps if you want to be really specific about it).

Otherwise, I found that altering the rest of Rage 2's individual video settings didn't really make a huge amount of difference in the grand scheme of things. That, or the boost I managed to gain was so small that you simply wouldn't notice it without the aid of a frame rate counter - and even then we're sometimes only talking an increase of 2-3fps. Short of dropping the whole preset down to Medium, then the tweaks I've described above should be enough to push the frame rate in that well-greased 55-60fps zone.

If you're really having a hard time with Rage 2, though, then I'd recommend employing its Automatic Resolution Scale Target FPS option as well. This lets you set a maximum frame rate, so you could always lock it to 30fps or, say, 50fps, if the adjustments I've outlined above can't give you a stable frame rate.

Hopefully, though, you'll be able to Rage 2 running without much fiddling at all in the game's video settings menu - although if you do spot any other graphics shortcuts I've missed, then please do share them in the comments below.