If you click on a link and make a purchase we may receive a small commission. Read our editorial policy.
Developer:
id Software, Avalanche Studios
Publisher: Bethesda Softworks

Watson Whoopinkoff and Flitwick Mcdimbledick are in an altercation. They're wearing the same (mostly lack of) clothes, and have both taken affront to this. We're in a particularly scummy part of a particularly scummy town, where nobody around pays them much mind. Except me. I stop and watch as insults escalate, until Mcdimble suggests Whoopy stick the robot hand he's holding somewhere untoward. Whoopy knocks him out with it, then strolls away. Sheepishly.

I'm not sure what happened to the Earth, but it sure was bad. Humanity has withered along with the planet, with people now dotted about in rag-tag clusters clinging on to a scarred and desolate landscape, painted in alternating shades of muck and dust. There are bright spots: you wake up to find yourself in one of them, as either a male or female survivor called Walker, from the only wasteland settlement not dominated by sleaze or corruption. An army of cyborg mutants destroys it in the first fifteen minutes.

It's all a bit bewildering, if you're new to Raging, as wos I. These are the same big bads as those in the last game, lead by an angry mecho-man who is called, and I’m still getting over this, General Cross. He squishes your aunty, kills everyone you know except your sister, then stomps off to snarl at stuff elsewhere. You find a recording of your aunty in the rubble, urging you to track down allies from the old war who can help stop "The Authority" for good. She also urges you to be careful with your superpowers, unlocked when you stole some fancy 'nanotrite' infused armour from a corpse during the attack.

Let's pivot to those superpowers, because unlike the story, they are not naff. They're fantastic. 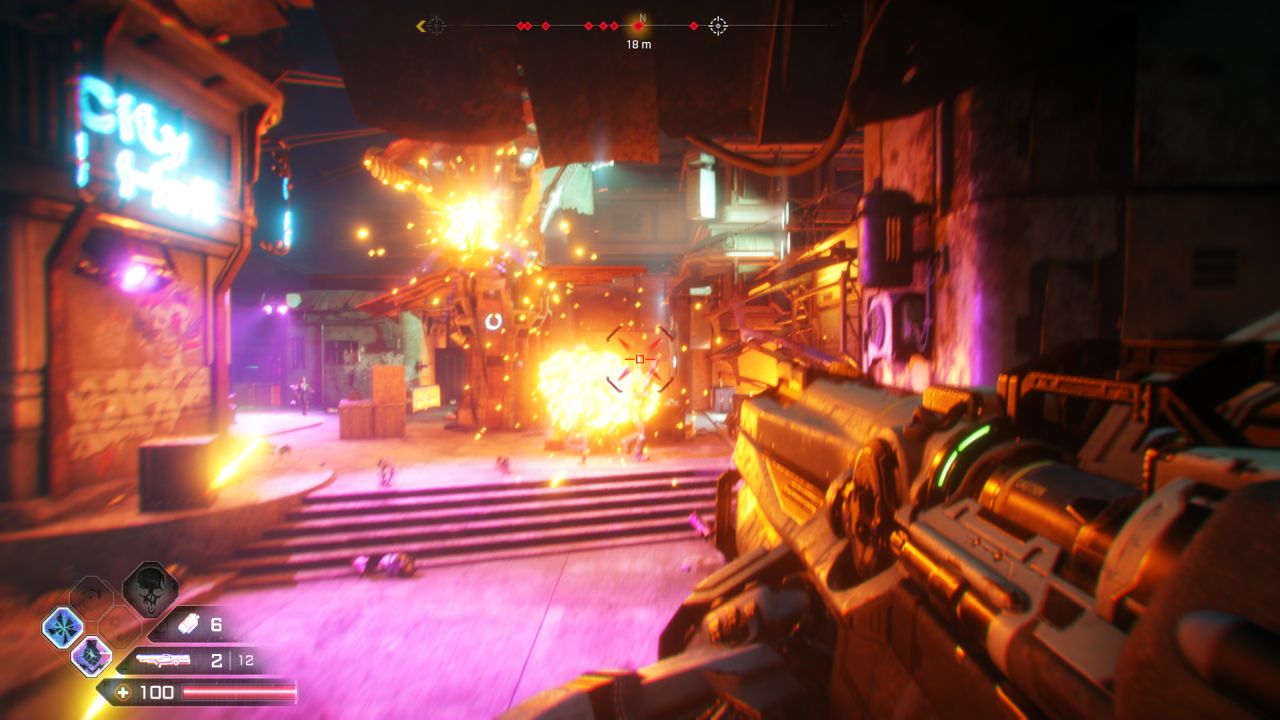 I slide around a corner, shotgun one enemy, then turn around and slam my palm towards the other, launching a shockwave that slams his body against a wall ten feet away. I sprint and dash, double-jump and hover. That's about the only time I stay still, picking off bandits while airborne thanks to an upgrade that extends my air-time with every kill. I dash again, over a sea of enemies, disoriented, panicked. They should be. My gravity pulse lands in their midst, throbs, then catapults us back into the sky. They're helpless, but I'm slamming back down towards the floor, crushing stragglers, then firing revolver shots at the enemies still suspended. I click my fingers, and they all erupt in flame.

I've never felt so sorry for goons. Like Doom, or at least modern Doom, combat isn't about careful cowering. It's about charging around, constant movement, constant killing, unleashing destruction in dozens of different ways. Kill enough enemies and you get to activate Overdrive, a brief frenzy of purple filters and stupid damage. You're faster, deadlier, and with weapons that temporarily forget about their limitations. That revolver, for instance, normally needs you to riddle enemies with bullets, then use its secondary fire to light them up. In Overdrive, it's all fire all the time, baby. 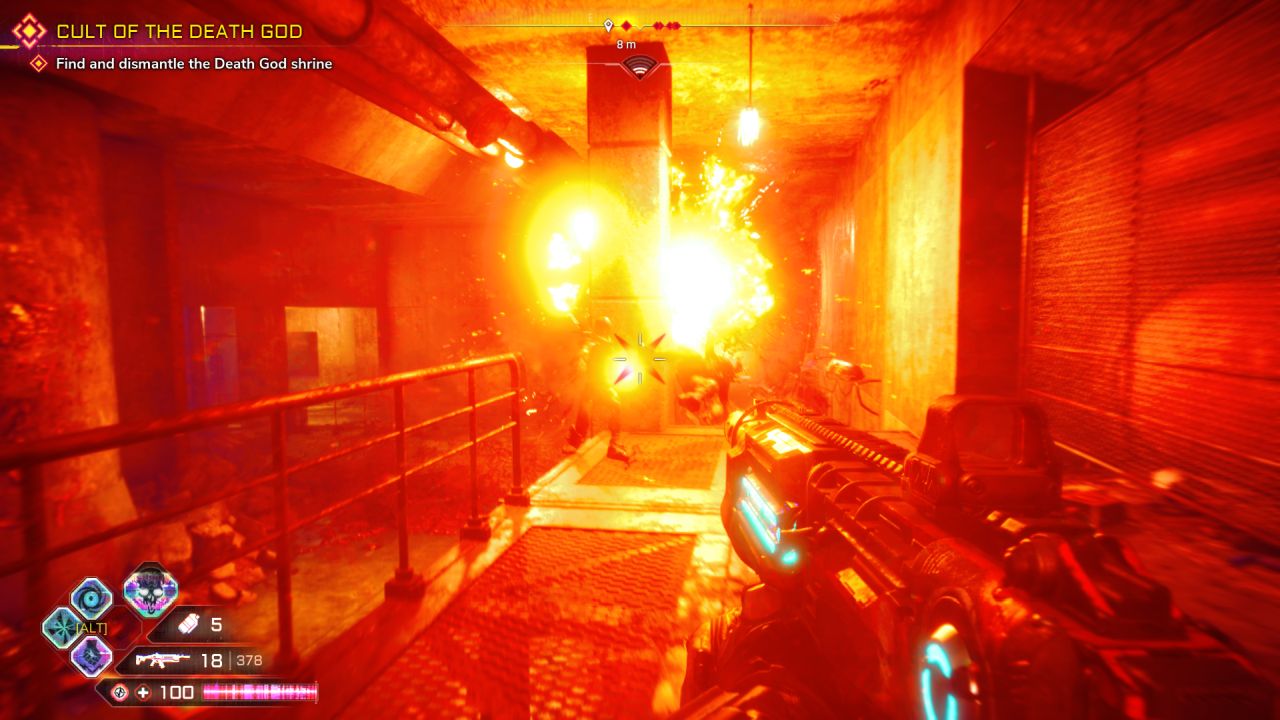 Generous, is the word. If you're fighting a big group, and you're fighting well, you can spend maybe a third of your time in Overdrive. It's generously varied, too: there are four different main nanotripe powers, dozens of characteristic-changing upgrades, and ten different weapons that mostly have (more limited) upgrades of their own. There's also a completely separate perk tree, itself split into three, with 64 choices to mull over. It's exhausting, but welcome. I normally feel like I've unlocked everything I want once I'm maybe halfway through a game like Rage, but here I was still jonesing after specific upgrades right up until the final curtain.

Not that I've reached one. The main campaign is technically only eight missions long, though some of these are convoluted and take you to multiple locations. Those missions are mostly the blando potatoes you wind up pushing to the side of your plate because you want to tuck into all the meaty side activities. For me, at least.

The world itself isn't usually much to look at, and the side activities are undeniably repetitive. My character's voice, upon discovering yet another bandit den, exudes the boredom part of me feels I should have. I don't, though, because the combat always feels electric. Superpowers are a huge part of that, sure, but its backbone is sculpted from nigh-on perfect animations and sound design. 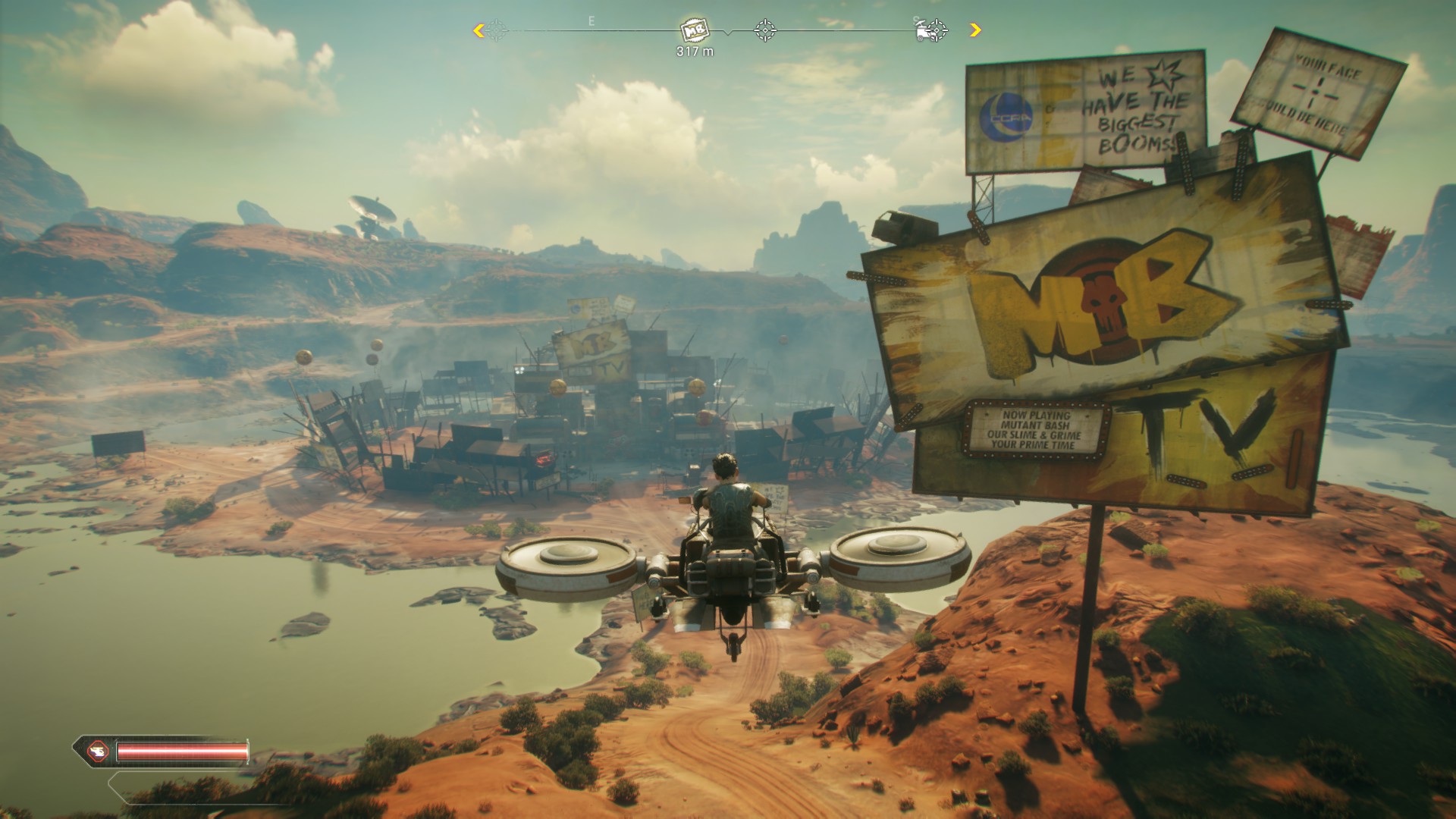 Testament to that is how the game has scuppered my tendency to ignore assault rifles, whenever I'm given the chance. Even with Rage 2's array of rocket launchers, hyper cannons, and gravity darts (fire at an enemy, fire at a wall, giggle as they collide), I kept coming back to that bog standard rifle. It.. crumples enemies in an unprecedentedly satisfying way, an interaction so fundamentally appealing that I lack the words to describe it. I'm going to cop out and say you won't quite know what I'm talking about until you've tried it.

It helps that the side missions aren't all of that 'wipe out the bandits' brand. You dive into sewers to kill hulking monstrosities, defend power relays on the surface, destroy ancient sentries, pick apart modern convoys, slaughter mutants and, sometimes, solve puzzles. I've spent most of my time roaming the wasteland, stumbling between distractions. At first, I did that in a car which talked to me in a sultry robo-lady voice, which is also upgradable (the car, not the voice). Then I unlocked a gyrocopter, liberating me from both roads and gaps of more than thirty seconds between each fight.

Here's the masterstroke. While I enjoyed my meanderings, those side activities were mostly tempting stop-offs while I was actively hunting down Arks. Those are vaults containing game-changing tech, either in the form of a new power or a weapon. You can search for them by holding down the super button (which I recommend rebinding to Alt, by the way), revealing pillars of light across the horizon. It's a form of treasure hunting I'd forgotten how much I valued, tracking down interesting abilities that let me approach fights in ever-expanding ways. It's the best quest for power since going after dragon shouts in Skyrim. 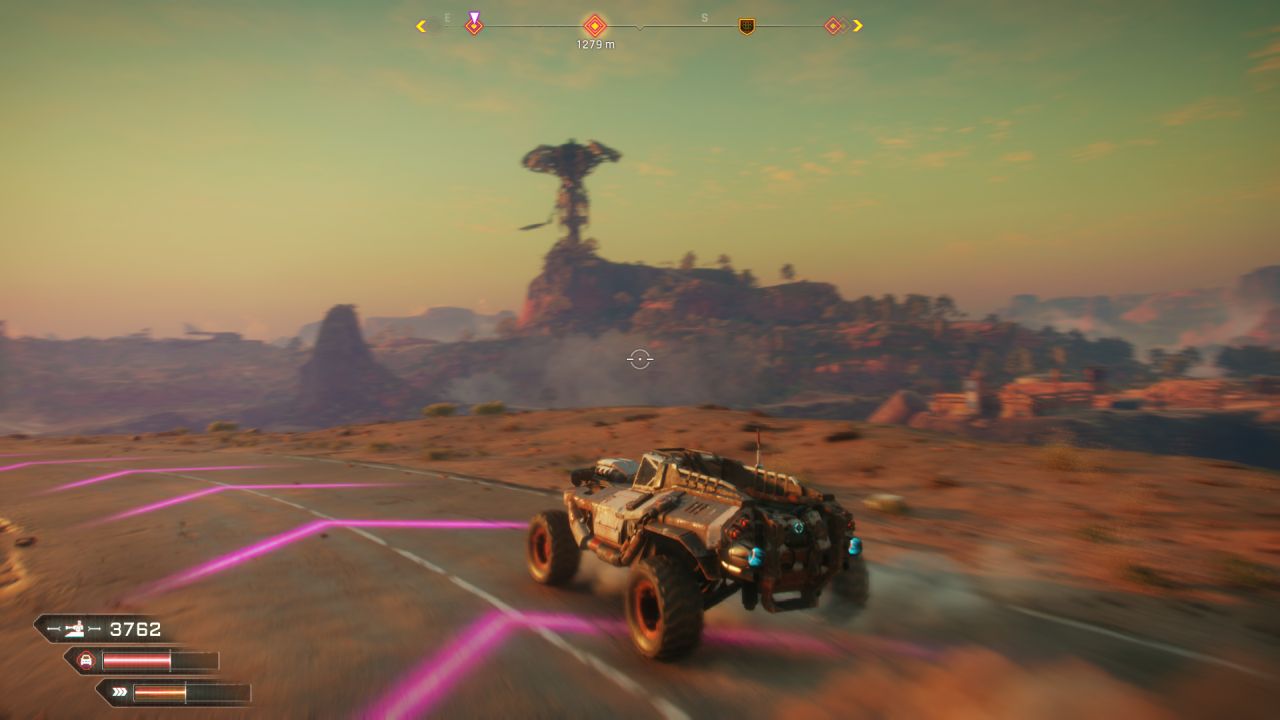 While Skyrim's appeal revolves around its world, though, this is one of Rage's spottiest areas. It never entirely escapes that murky colour palette, whether in swamps or desert. Then there are those moments like the one I mentioned at the start of this review, where NPCs do something so arrestingly strange or gross that I can't help but stop and stare. Problem is, they all tend to hit the same note. It's mired in immaturity, like the writers have taken Mad Max's aesthetic but stripped out any gravitas or politics. There is a lot of thrusting.

It's too much for me, but also overshadowed by my deeper problems with the presentation of Rage 2's underclass. They're dotted around slums and sludge farms, miserable toilers with names like "Scum" or "Placentatrickle". At no point do you help or even interact with them: the heroes simply do not care. You actively help the people responsible for their suffering. It's poverty set-dressing that doesn't quite sit right with me, an explicit de-humanisation that's far too throwaway. You might save the world, but you never save the people who most need you. 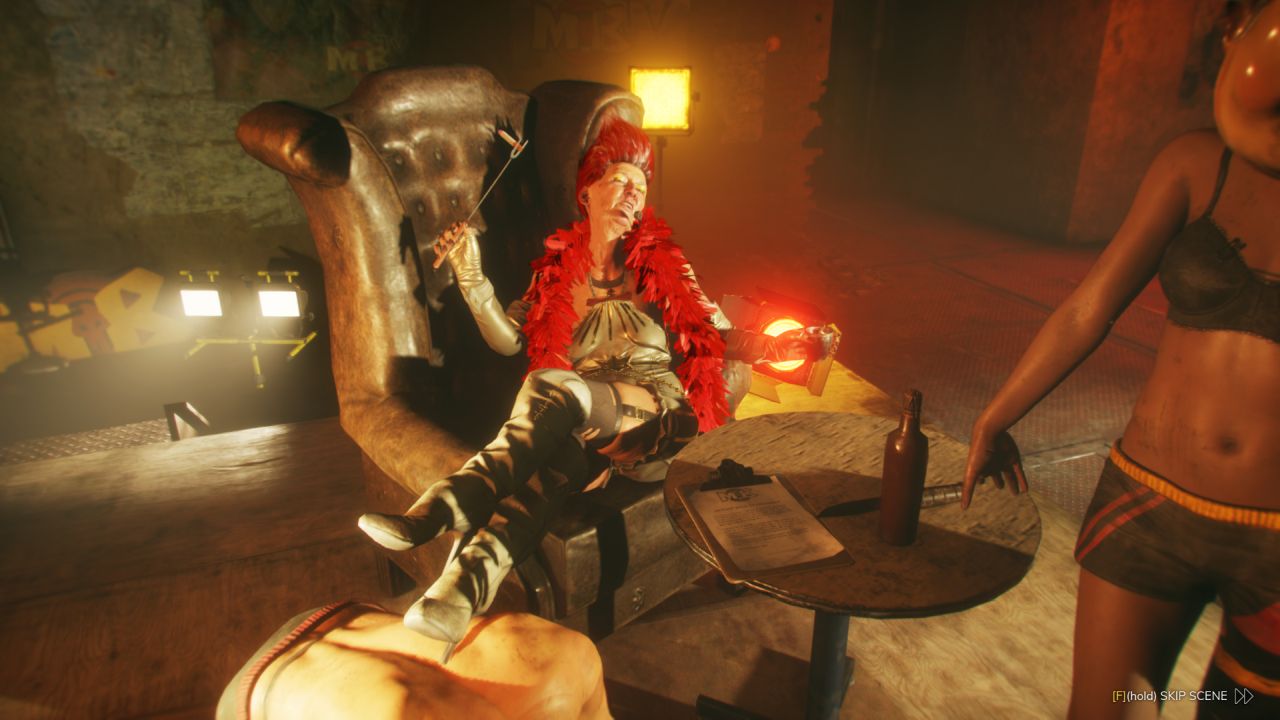 At least you meet some interesting people. The story is hokey, and the acting often hokier. There are more sci-fi macguffins than you can shake a fission core at, but every now and then you meet someone who'll make you forget you care. I'm smitten with Desdemonia, the producer of "Mutant TV". She’s got the decadence of Futurarma's Hedonism Bot and the viciousness of Queen Cersei, but comparisons don’t really do her justice. Sure, I'll kill for Desdemonia. So long as she keeps saying her name as if it's made of syrup. (After I'd slaughtered my way through Mutant TV, a predictably gladiatorial mutant squasher, I got rushed by a crowd of cavorting, drinking, sexy nonsense people. Then the cameras cut, and they snatched the trophy from my hands and walked back to their tiny compartment in a grumpy huff.)

Some writing shines through the crap. In fact, I like the names so much, I'm going to provide you with a paragraph of my favourites.

Note how some of those are written in capitals. The whole game is, really. Sometimes with poor spelling. 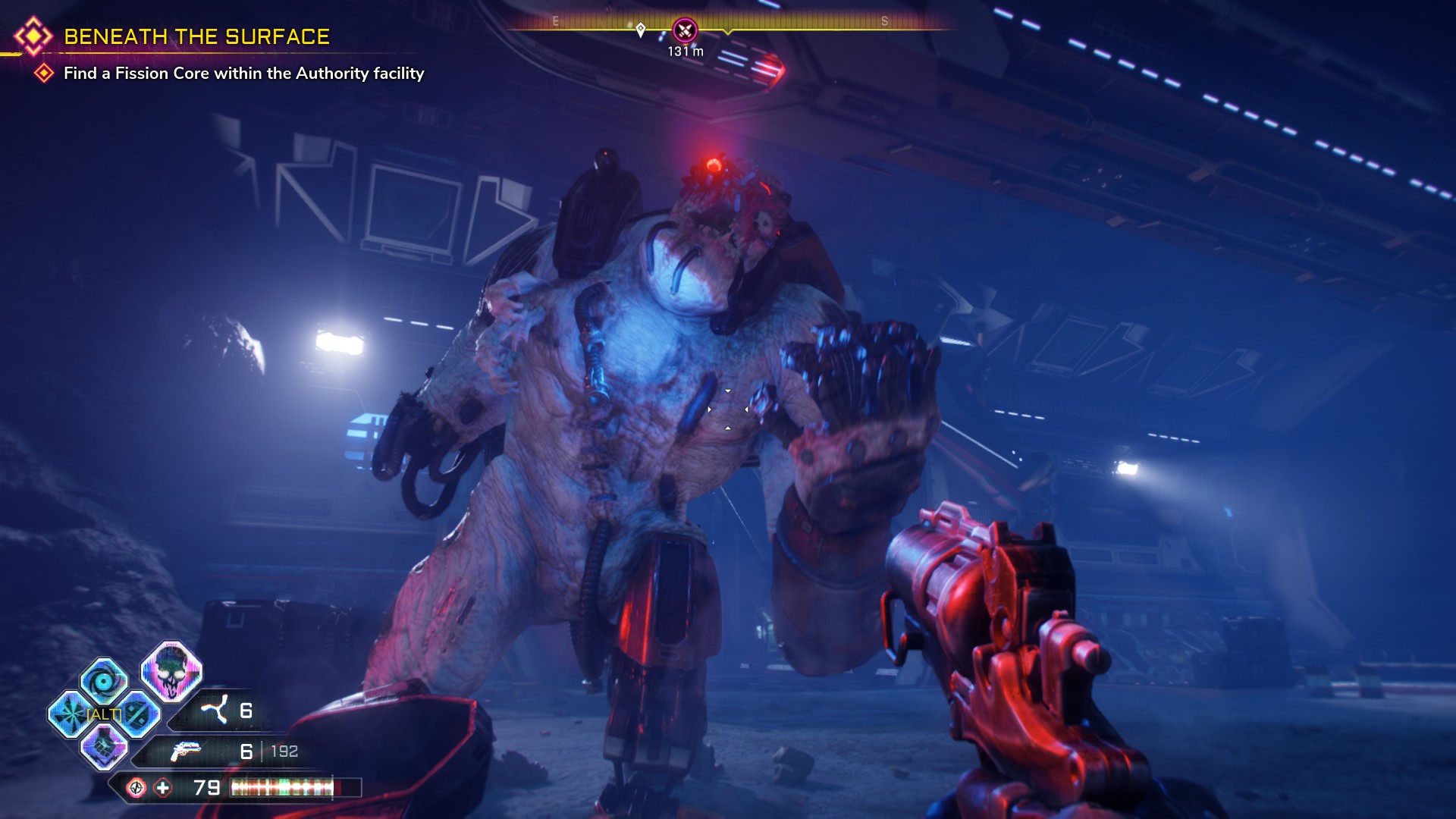 I haven't mentioned the bugs, or a dozen other minor grievances that build to major frustration. Pivotal voice lines are sometimes skipped entirely, leading to scenes where antagonists silently flap their mouth-holes like Machiavellian fish. Other lines are often repeated ad nauseam, such as Walker saying "I've found an Ark! Jackpot!" every time. Whenever I stumbled into anywhere deemed dangerous (each location has a 1-10 threat rating), my sister would tell me what my mum would have said about "assessing dangers" and going in "ready for anything". I KNOW WHAT MUM WOULD HAVE SAID. SHUT UP, MUM. I mean, videogame.

Still. These are the rough edges to a game I'm tempted to call a diamond, or at least a bit of beryl. The parts I like far outweigh the parts I don't. I've got my weirdo NPCs, my Ark hunting, my Whoopinkoffs and Dimbledicks. I've found every Ark, now, but I still plan on gambolling between side activities. I still want to explore, even though I wish I was exploring a world that had been less generically destroyed.

Most of all, I want to do more super-powered fighting. I might not even bother swapping from that rifle.