If you click on a link and make a purchase we may receive a small commission. Read our editorial policy.
Ritual Of The Moon takes around five minutes a day to play, for 28 days. Today is day 15 of my diary.

The siren call of the moon returns, and so do I (from my holidays). Surprisingly, despite being absent for 10 days, my moon calendar in the game still only pegs me at day 17. Perhaps the point of a daily ritual is that it sort of doesn’t happen unless you do it.

In any case, because of recent geo-political events, a trip to Ireland, a new Louis Theroux documentary, and a pregnant-person-Tamagotchi game all landing at around the same time as I start up the Moon Ritual, I must warn you that this entry is long, and liable to get very, very heavy. I’m talking about pregnancy. And about choice.

Marty Burnham The Moon Witch started today by saying that she missed her mysterious ex girlfriend. But, Marty thinks, “She made her choice. Now I must make mine.” Marty’s primary choice, on the face of it, is whether to protect the world, or allow it to perish. Her secondary choice is the mental one: seethe and rage whilst alone on a cold rock, or try and do an Elsa and let it all go (also whilst alone on a cold rock).

If the ritual is taking a pill, then that’s also a choice I make. I choose to try and avoid pregnancy. And if I were to get pregnant I would still have a choice after that, because abortion is legal in my country.

When I was 17 years old I was having sex with my boyfriend and the condom broke. I was on the pill but my mum still took me to get a morning after pill. She was very supportive right up until she saw the pill pass my lips, and then she told me off a bit, whilst we were in the car park. Another time I was at University, and fell for the old "it's okay if I don't wear a condom, I definitely won't jazz in you" routine, so I had to traipse down to the sexual health clinic for a MAP at 7am, ferociously hungover.

I think about the term ‘abortion’. I think it’s an unhelpful one. It makes me think of a flashing red light on a spaceship, and a frantic man yelling ‘ABORT! ABORT!’ It implies fuck-upedness and a drastic accident. Many people point out that the term pro-life is similarly bad because it implies the other side is anti-life.

I was in Ireland this week. Until recently, the Republic of Ireland had an abortion law similar to the one now threatening Alabama. The campaign to repeal the 8th was hopeful and heartbreaking, and carried by stories like the death of Savita Halappanavar, and hundreds of others sharing their own personal struggles. Because the law didn’t stop Irish people from having abortions, as demonstrated by the cutesy euphemism of saying someone “went to England” -- where abortions were always available, you see.

In Alabama, a new bill imposes a near total ban on abortion at any point of the pregnancy. The act is treated as a class A felony, and doctors performing the procedure could face anywhere from 10 to 99 years in prison. An exception is made only in the case that the pregnant person’s health is at risk. There is no exception for pregnancies resulting from rape or incest. Six other states have imposed bills banning abortions after six weeks.

You know what else? The statistics vary, but the NHS website estimates around 1 in 8 known pregnancies result in a miscarriage. And we don’t talk about it. We never talk about it. 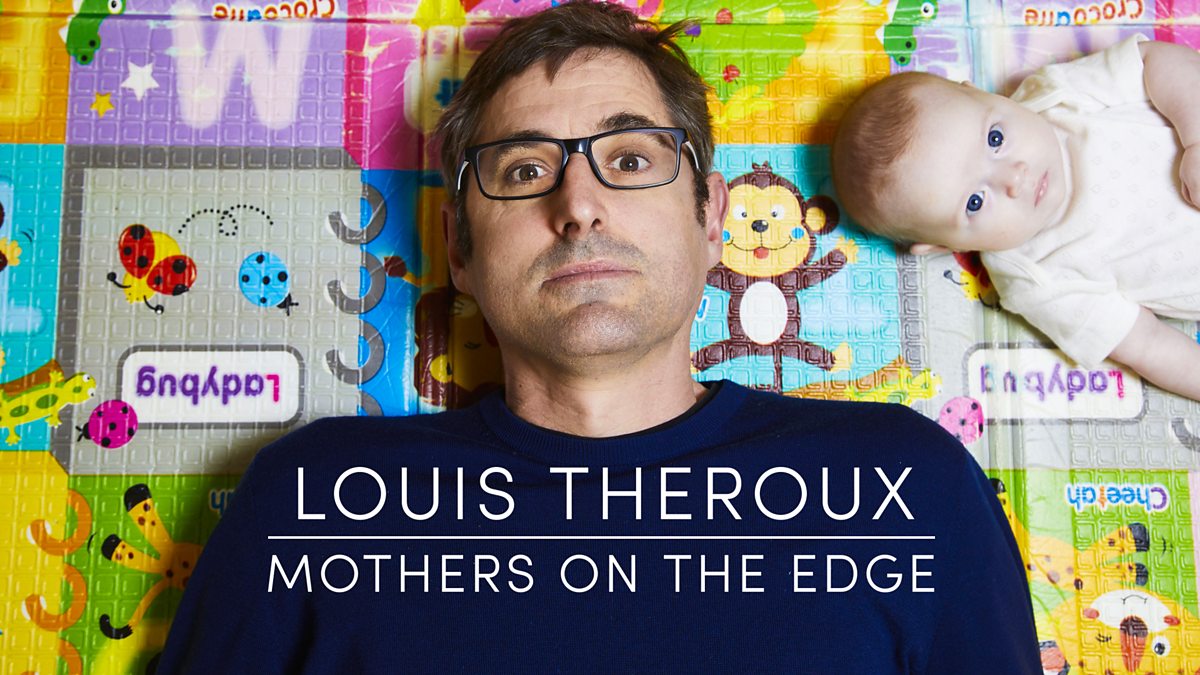 So I was thinking about all this already, and then Louis Theroux did a new BBC documentary called Mothers On The Edge, about parents (and children) experiencing serious postnatal mental illness, which is something else we never talk about. The idea we receive is that pregnancy is lovely and you’re “glowing”, and after birth everything is rosy and maybe you’re a bit tired, but you know, you soldier on. But the reality is very different. Birth itself can be an immense physical trauma. Looking after a baby is difficult. And that forms part of the struggle - if you’re finding it hard, it must be because you’re a shit parent. One woman in the documentary was honest about how she was struggling to love her new baby. They were all so very brave to be on camera.

And then I found I had an email about a game called Fantastic Fetus, a browser game by a group of devs operating as Fantastic Humans. It was inspired by Poland’s similarly antiquated abortion laws, which threatened to become even more draconian in 2016, until mass protests resulted in the government backing down. Last year they had to protest again.

In Fantastic Fetus, you have to look after TamaTata (who can have a bob and a skirt or a beard and trousers) though their pregnancy, as you would a Tamagotchi. You must keep an eye on their weight, make sure they eat, take medicine when they’re sick, tidy up and shower sometimes, that sort of thing, for nine game days that represent the 9 months of the pregnancy. Each night TamaTata dreams of their fetus, and you can give it a number of magical fantasy features, like little goat hooves or a unicorn horn. 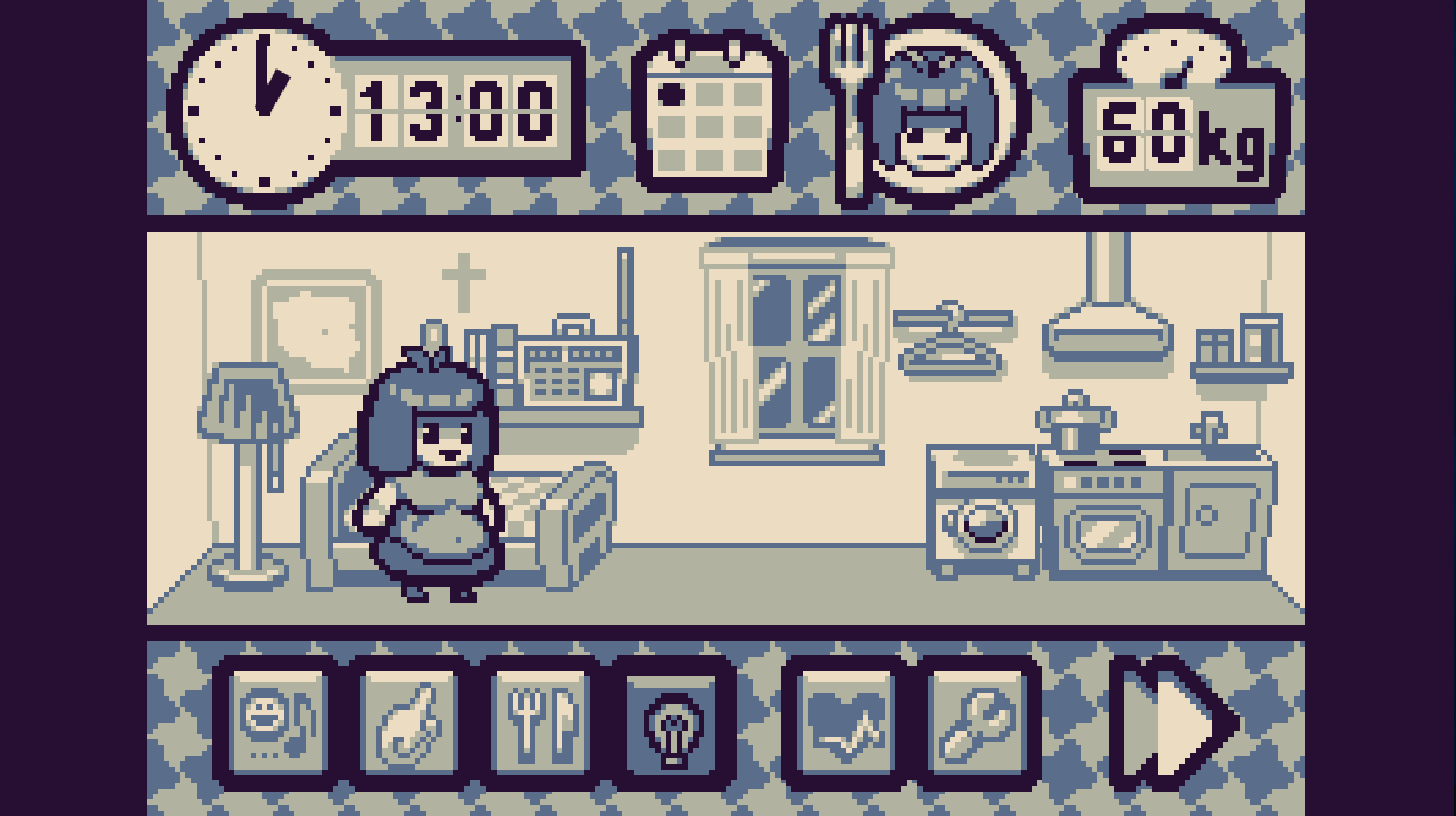 The day came for my fantastic fetus to be born, but they were not what I was expecting, they were not what TamaTata had dreamt of. Then Fantastic Fetus gave me the official 2017 statistics in Poland for the number of legal abortions performed in the case of rape (0), those performed because the foetus was endangering the life of the pregnant person (22), and those performed because the foetus was unviable (1039). 37 million people live in Poland.

In the very first one of these diaries, I said that pregnancy was partly a Cronenburgian horror in my mind, which it is, which seems callous given how many people desperately want to have a baby and find they cannot, for various reasons. Or those whose baby dies inside them and they are forced to carry to full term. Who think they are failing somehow, in so many ways. People don’t gleefully skip to the clinic to get an abortion. I know people who have had them. So do you. Because the truth is if I think about it too long, pregnancy is also so terribly frightening. What if, what if, what if, you know? I haven’t tried to get pregnant yet. What if, when I do…?

And I have subjected you to a thousand words that are almost unrelated to games, but this feature series is about what this game has made me think about, and playing it today made me think of all the horrible mess that is pregnancy and abortion and birth, so there you go, this is it. And it’s important because this is a huge, huge issue that seriously intersects over class and race and sexuality and gender. We need empathy, and games are good at that when, for some reason, a person telling you something they've experienced might not be enough.

Bait and switch. I said abortion is legal in my country at the top. Well, if my country is the United Kingdom, then not everywhere it isn’t.

Today’s ritual drawing is a window. I don’t know what’s on the other side. 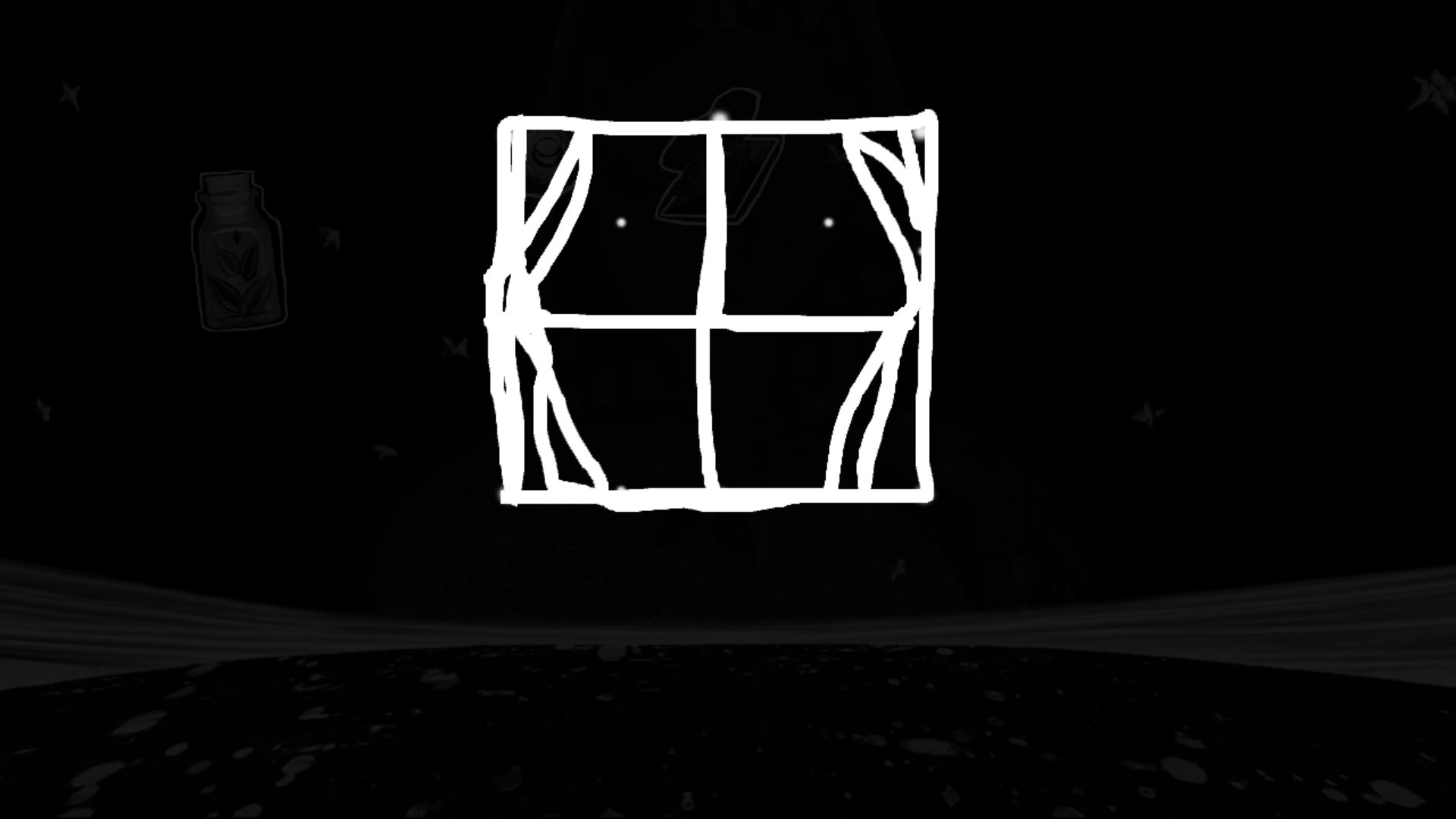