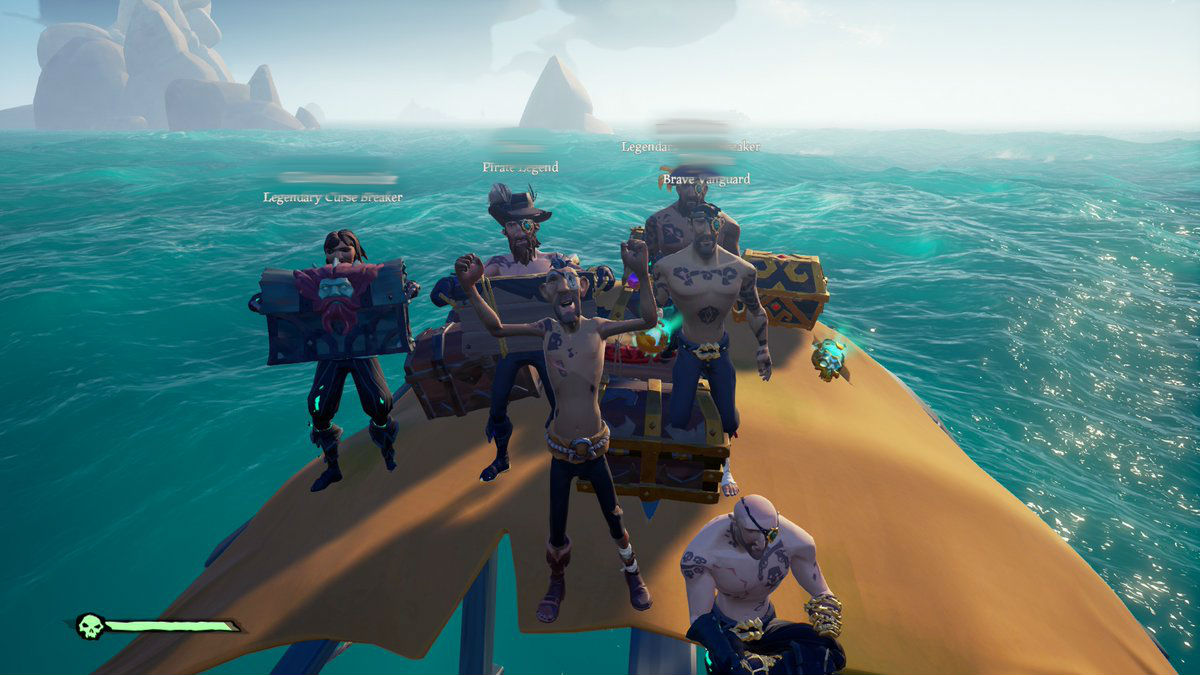 Online games live and die by their audience. Give players the tools to create unique stories and foster closer relationships and there’s no guarantee they’ll go out of their way to use them. Often they resort to their baser instincts.

This was arguably the case when Rare released their pirate sandbox game Sea of Thieves, back in March. It was an extremely common occurrence for new players to load in and be instantly sunk on sight by another group of pirates, griefing simply because they could. But, over the following months, there’s been a noticeable shift in the game, with the player base evolving beyond just PvP. Now, players are breaking out of the monotonous grind to Pirate Legend and taking advantage of the game’s full potential, creating memorable stories and community events out on the seas. This is in part due to a frustration with the base game, and the lack of explicit story and community content delivered by Rare.

Take Loot and Lore, for example, “The #1 Sea of Thieves gameshow”. Travis "FrostE” Zygmunt started the show one night while streaming along with his co-host. The goal was to create a more welcoming community for new players, as he had recently grown tired with the non-stop PvP. 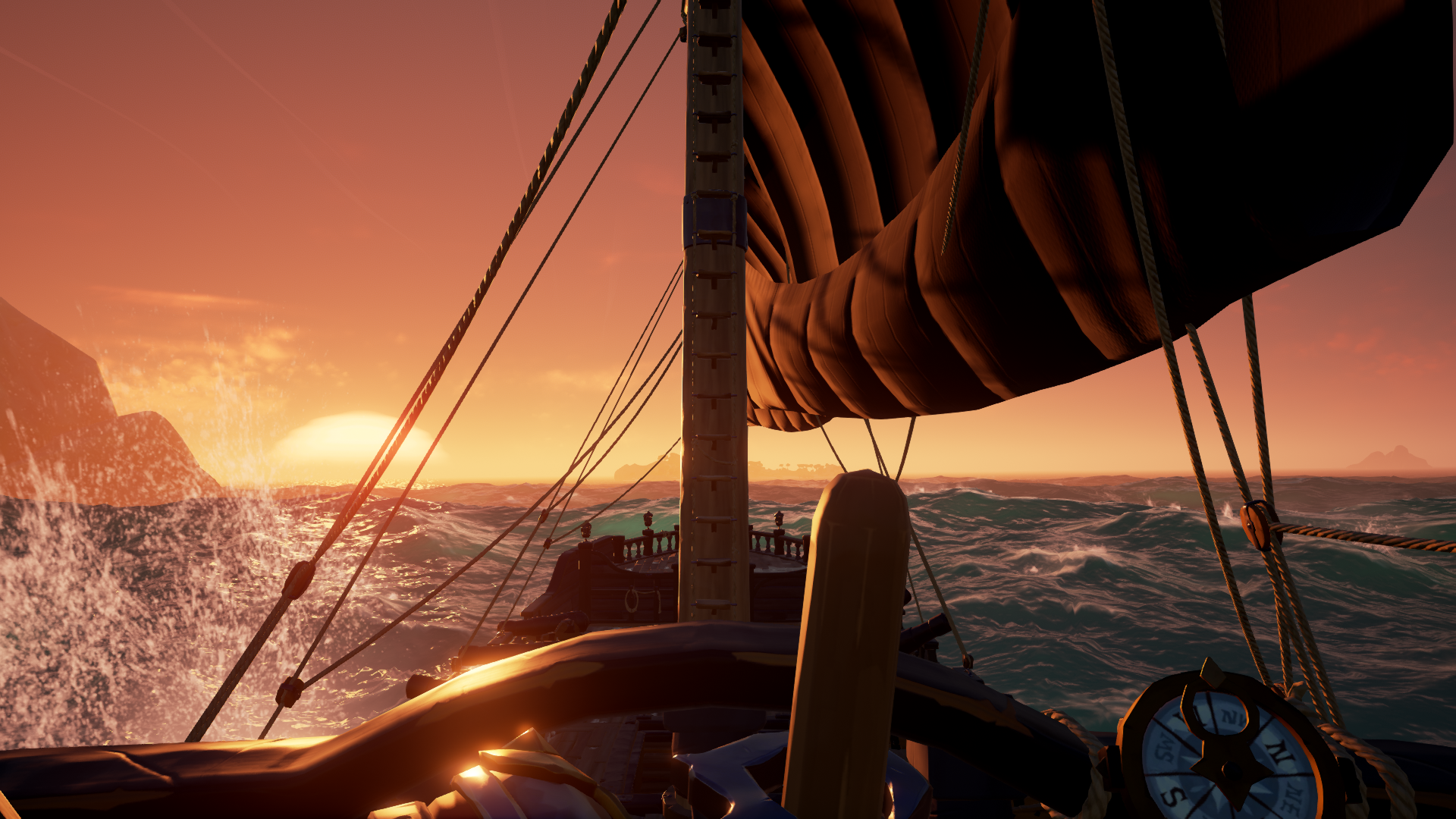 “We’d already had our share of PvP and just messing people and not being the nicest pirates around when we found people,” he says. “So, we felt like we weren’t really helping the game grow by doing a similar thing. So, instead we became advocates for good behaviour and helping people and, you know, just getting people more involved.”

The game show currently has three challenges that crews can partake in: a round of trivia questions, a drunken obstacle course called Paths of Chunder, and a fencing competition on top of the main mast. Zygmunt is planning to add more after the end of Cursed Sails expansion, as part of the second season of Loot and Lore

Late 80s and 90s game shows, such as American Gladiator and Double Dare, were the inspiration behind Loot and Lore. Instead of winning cash prizes, however, these contestants are given the chance to earn valuable items like chests, skulls, merchant supplies, and even, on occasion, the key to an active skeleton fort. All of these items have to be painstakingly collected prior to show itself, though Zygmunt believes the effort is entirely worth it. Since starting the show, he’s been growing a legend for himself on the seas, occasionally encountering the odd player who’s heard of his exploits from Reddit, Twitter, and YouTube compilations.

“Giving the loot away is just really addictive. Like, it sounds really weird, but once you start giving away your loot and start getting people’s reactions - where they’re like ‘oh my god, this is amazing, thank you so much’ - that feeling is just really great and it is super addictive. I never have a problem giving away that stuff.”

Not all players have such altruistic aims. HexenAlf and his crew The Allmondbeard’s Revenge (comprised of Godfada xx, Ant3990, CRUNCHYKASHOE, IXI HamHock IXI, and TSB rickrick57) have become notorious for exactly the opposite reason. They’re the former world record holders for the largest collection of items gathered in a single play session, having amassed a whopping 1247 sellable items, a feat that only one other crew, The Cutthroats, have bested, with their haul of 2018 items.

“The idea to undertake the task arose sporadically,” says HexenAlf over Twitter. “Our achievement ultimately took three attempts to become successful. But, we started our first voyage by saying that we would only try to obtain 100 items aboard the ship.”

After two Allmondbeard messages, Rare’s in-house term for disconnects, the crew grew frustrated. But rather than quitting, they decided to set out again and try for an even larger haul, one that would make them famous among their fellow pirates. For the crew of the Allmondbeard’s Revenge, avoiding PvP was a method of self-preservation. Collecting more loot was the real priority, with PvP being seen mostly as a solution to losing hours of work.

“At times, we would love some PvP,” says HexenAlf, “but we also knew that once people saw how much loot we had on the ship, they would never stop chasing us. ”

It took the crew of the Allmondbeard’s Revenge 55 hours in total to achieve their record-breaking haul. Now, having lost the title, they intend to set sail again soon. HexenAlf says they’re targeting 5000 items this time around, a far cry from their original goal. [Ed.: Good lord. Do not stay up for 55 hours playing a video game, kids.]

This isn’t the only impressive ad-hoc feat that’s happening on the Sea of Thieves either. There’s also been a bunch of incredible community events hosted in the game. Most of these are a result of pirate unions - huge waves of players coming together under different banners to create their own remarkable tales.

The Fortune Union was among the first of these. SirioNDB, who like many of the others I interviewed prefers to go by his screen name, created the union as a response to toxicity in the community and to provide players with the chance to leave a tangible impact on the game’s world.

“I wanted to setup rivalries between fleets and organizations, and that's what I'm doing right now,” says SirioNDB. “These events bring the community together but also creates a common story for us to share. Sea of Thieves is a game where we are the protagonists. We leave our mark upon this world, and I intend to influence that story.”

Though these pirate unions have dabbled in traditional PvP in the past, most events are non-violent in nature and use the mechanics of PvP to create fun games to play as a community. Since they’ve started, they’ve hosted Brigantine races, for instance, as well as scavenger hunts, and even their own version of Trollball, which is appropriately titled Skullball. In this game, two teams compete to place a skull in the other team’s Crow’s Nest, with an island in between the two ships. The winner is the first to three goals, or the crew who is leading after 15 minutes of playing.

According to SiroNDB, finding other players to compete in these events is the easy part. In fact, the Union has even started having to turn players away from individual events due to the limited spaces available. The hard part is the amount of work that goes into the preparation and planning for the events, as it requires union members to go into the game ahead of time and convince strangers to give up their ships.

“Logistically, it's quite a demanding process to gather the ships for our Events,” he explains. “We have to talk to the other players on a server. Convince them to give us their ship. Get event volunteers to fill a slot on the new ship and then ask the owners to leave. In the best of cases, everything works out perfectly… and sometimes it doesn't and it's painfully annoying.”

Currently, Rare hasn’t added a way for multiple ships on the same friend’s list to load into the same server, which means anyone who is attempting these types of community events faces an uphill battle to acquire a server shard to themselves. It’s unclear whether they are going to make moves to facilitate or reward user-created stories in the future. But, for now, it seems these players are content with going the extra mile, regardless of any additional effort.

Sea of Thieves is a game that is defined by its limitations: whether that be the limited selection of items that are available to its players or the three bare-bones voyage types that crews can embark on.

While that has undoubtedly turned away some players, it hasn’t stopped others from taking the game in exciting, new directions that even the developers couldn’t have imagined. These pioneers are what make logging into such a fascinating social experience, where one minute you might be fighting for your life and the next winning big on a maritime game show.