Before entering Ashina Castle, there's an absolute unit of an obstacle to overcome. Some bright spark among the guards of Ashina Castle strapped some flaming straw to a bull's head, making it go berserk. This is animal cruelty but since you can't help the poor, albeit violent beast, it's perhaps kinder to put it out of its misery with your blades.

This guide will give you the tips you need to avoid the Blazing Bull's rage, as well as the location of a useful item that may aid you in your fight. It will also cover the Sakura Bull fight later in the game.

How to finish the bull fight

There's a tiny bit of preparation that you'll need to do before you begin this boss fight. From the Castle Gate Sculptor's Idol, head back through the battlefield where you fought Gyoubu Oniwa and look for a merchant. For 500 coins, he'll sell you a new prosthetic. Equip it and it'll give you explosive charges that you can use to distract the bull. You can also bring in some healing items that deal with burn, as well as the Gourd for burn resistance found earlier, but these aren't necessary. 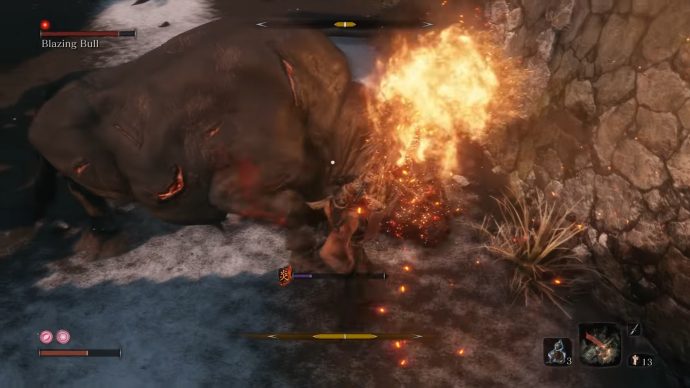 The other thing you should keep in mind is that you don't want any other enemies in the room other than the ones that live in the courtyard. This means that the dogs, soldiers, and two ogres you likely passed through before entering. If one of the ogres makes it in, they're surprisingly durable against the bull's attacks and will go for you rather than the bull. As a precaution, just sprint through or kill all enemies beforehand and you shouldn't have any stragglers getting in the way of the fight.

As you enter the courtyard where the bull resides, kill the enemy in front of you with a backstab. The other two will be trampled by the bull as it breaks through, so run away as soon as it happens to avoid the initial charge. The idea behind this fight is that you should be behind the bull as often as possible. While it's running, sprint after it by holding the dodge button. When it stops to do the prolonged slide and turn around, that's the attack opportunity, so veer to the left and get a hit in before it sets off.

The Blazing Bull is far more dangerous when it stops, but you can thankfully deflect all of its attacks - even if the fire indicates otherwise. However, if you want to ensure it doesn't attack as often, use an explosive charge to make it rear up. This gives you ample time to get a bunch of hits in. It'll likely take off soon afterwards, so get back to sprinting after its rump.

Occasionally, it may decide to go fully berserk and charge straight into a wall. Watch out for it falling backwards in this case as getting crushed by a bull as large as this one means certain death. Since it only has one health bar, so once it's either run out of health or its posture is broken, you can win the fight.

For putting down the beast, you'll get some prayer beads, the Shinobi Medicine Rank 2 skill which increases health regained from healing items, and a small amount of experience. The doorway will immediately open to Ashina Castle, with some soldiers pouring in, so kill them and head to up the castle. 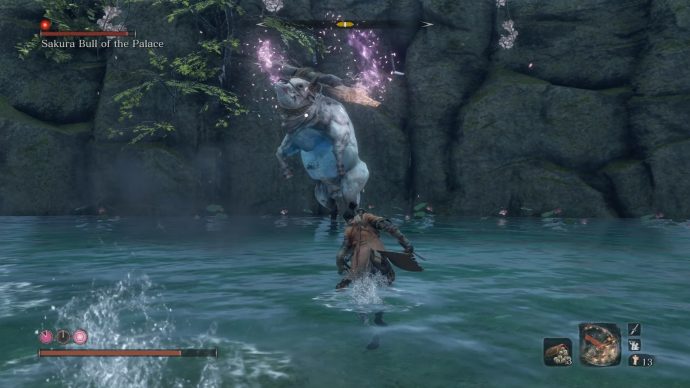 Sakura Bull of the Palace

Later on in the game, there is a second bull that you can fight close to the Flower Viewing stage Sculptor's Idol in the Fountainhead Palace. Before fighting it, head to the roof of the building behind the Sculptor's Idol and along the right-hand side. Kill all of the archers as they will make the battle harder with the bull down below. Once they're done, try to perform an aerial attack while locked on. Normally this kills enemies, but this hunk of beef is made of sterner stuff, so you'll only deal a chunk of damage.

The key difference with the Sakura Bull is that it doesn't have fire, but can inflict hefty damage. It otherwise acts in much the same way as the Blazing Bull and thus you'll need to use the exact same tactics. The reward for defeating the Sakura Bull is a prayer bead and the "A Beast's Karma" skill that increases the number of emblems you can carry at a time.