As likely one of the first real bosses you'll encounter in Sekiro: Shadows Die Twice, Lady Butterfly is a boss that can catch you off guard if you don't know what you're doing or realise you can cheese the fight. A master of illusions, she also uses kunai and ninja techniques to disorientate you. Since the first version of this guide, there have been some more consistent strategies I've found, so if one way doesn't work for you, there is a similar way that is a little more consistent.

This boss guide will take you through Lady Butterfly's attacks, an important step you can take to ensure an easy victory, and an exploit to make this fight ridiculously simple.

How to defeat Lady Butterfly

Your mileage may vary with this one, but for me this was the first fight in the game I did on the first attempt. However, there are a couple of things to note about this fight. Just before you enter the cellar door, there is a wounded man outside who will give you a few snap peas. These are important for the second phase of the fight, but we'll go into why in a bit. 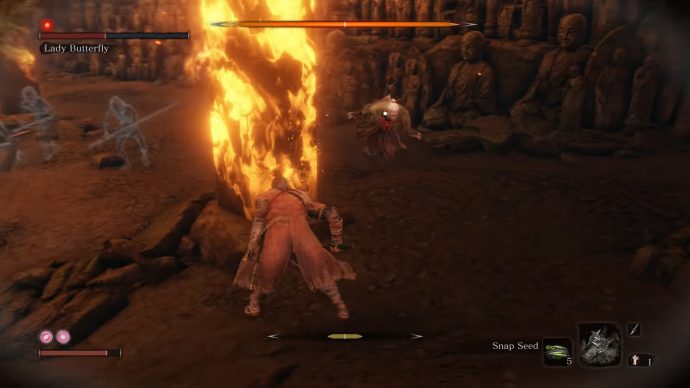 Her attacks are nimble, but easy to deflect. The trick is to never let her get distance on you, as she will throw the kunai in a spread. Close the distance and attack her a couple of times to prompt the setup attack you need to take home the advantage. Whenever she jumps into the sky and stands on thin air, she'll follow it up with a dive kick. Jump backwards to avoid the oncoming attack, or throw a Shuriken to interrupt the attack. If you do throw a Shuriken, make sure it's as she's moving, rather than when she's standing on thin air, as she'll just deflect it.

The reason this fight was so easy for me was that her normal attack speed is very slow and exploitable. If you hit her after she lands, delay your hit by half a second so she begins another attack, then hit her again, it will interrupt her next attack. You can do this repeatedly, as your attacks are far quicker than hers, meaning you only need to be aware of when she leaps into the air. Getting greedy and following it up with a quick second hit will make her block with her feet, so it's vital that you just get the timing down to stack up the damage.

If you want a more consistent way to beat Lady Butterfly's first phase, attack twice, then step to the side and repeat. While the second hit will be blocked, stepping to the side gives you an opportunity to attack provided she's not already gone airborne. As you deal damage to her, you may also notice her posture will recover slower. This is a key thing to note as all enemies's posture recovery is affected by damage dealt, and this is where you'll probably learn that this is the case. Once you reduce her health bar or posture, it's not quite over as this was a mere illusion.

After her first phase is down, she'll taunt you from the shadows, then appear to immediately spawn some clones. You'll need to take her down once again. This is where the snap peas come into play. Simply pop the peas when the standard sword enemy illusions appear to immediately despawn them, allowing you to focus on Lady Butterfly. She has the same exploit as the first phase, so try to get her in a loop.

In addition to the jump attack, she can try to summon them again, which snap peas can get rid of. She does have one more attack which is a flurry of blows that end with an unblockable sweep. Jump and dive kick when she does this to deal lots of posture damage. Illusions aren't the only magic she has as she can also summon shimmering butterflies that home in your direction. Just keep dodging these when they appear and focus on stun-locking Lady Butterfly.

Once this health bar is depleted or the posture is broken, attack whenever you see the red flashing light prompt to win the encounter. Your reward for beating this boss is 1500 experience, the Lady Butterfly memory that can be redeemed at the Sculptor's Idol for increased attack stats, and the Sakura Droplet which gives you one more resurrection sphere that you can charge up.

After beating her, there's nothing more for you in Hirata Estate memory. It's probably a good time to head back to Ashina Castle, where a fight with a very angry animal is on the cards. Our Sekiro: Shadows Die Twice Blazing Bull guide will go over some preparation tips and things you need to know to put this beast down.