Down the normal ending pathway, which is accessible by not siding with Great Shinobi Owl in the pivotal moment in Sekiro: Shadows Die Twice, you'll eventually come across a body of a young woman up a mountain. By praying to the body, you'll awaken in the Divine realm and face off against the Divine Dragon, whose tears you need to complete the game.

This guide will go through this boss battle, from the Old Dragons of the Tree, to the Divine Dragon itself, which is a puzzle based boss fight that is rather simple. That is provided you know what to do and how to dodge the attacks.

How to defeat the Old Dragons of the Tree

This phase is easy, particularly if you made sure to defeat O'Rin of the Water in Mibu Village, look to our section in the Sekiro: Shadows Die Twice boss for the tips on how to defeat her. There is also the Shinobi skill "Breath of Life: Light" skill that costs five skill points to unlock. Both of these heal health as you perform deathblows, which will make this fight a lot easier for you. 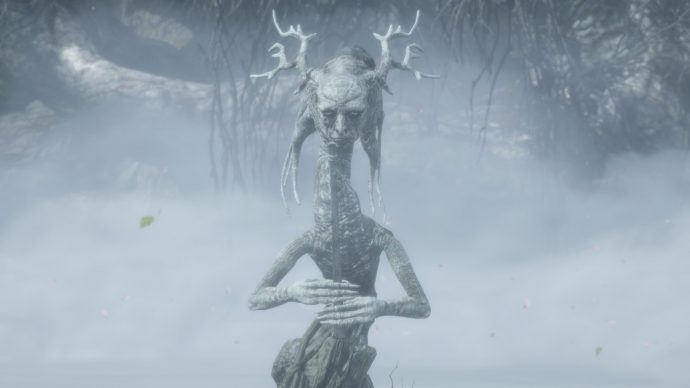 As you begin, more of the Old Dragons of the Tree will spring up. They're a bit sickly and will cough up poisonous clouds, which is their only dangerous means of attack. These clouds do linger for a short time, so try not to get stuck in there for too long. Pick them off one-by-one, performing deathblows to regain health.

Keep an eye on the floor however, as after a certain amount of time, the floor will begin shimmering. This is an indication that roots are going to spring up from the ground, which deal a fair chunk of damage. Three will come up at any given time, so dodge them all, then recommence your assault.

Darker variants of the Old Dragons will spawn, but these don't count towards the health of the boss. Kill these ones only if you need some extra health via the Breath of Life skills. Eventually you'll finish off the last one and trigger the second phase of the fight. 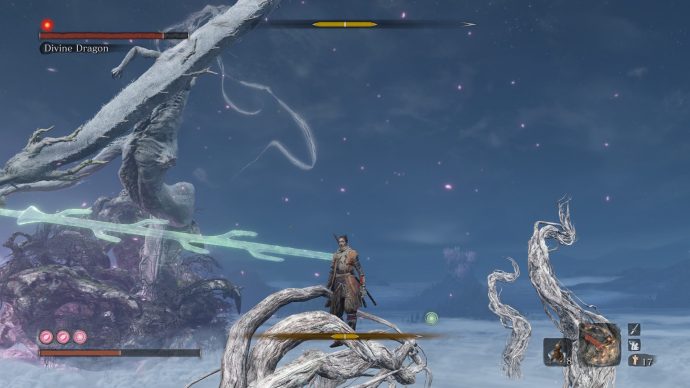 How to defeat the Divine Dragon

With only one health bar, this fight is not hard at all to begin with. The general idea is that the dragon will slash its sword in highly telegraphed directions. If its horizontal, jump over it, while vertical and diagonal slashes should be dodged in the correct direction. All the while, you'll need to be running towards the boss.

Four tree roots will spring forth and the idea here is to grapple onto the one that's being struck with lightning. When you get to the lightning, mash on the attack button to perform a special lightning deflection move. You got this skill just after beating the Ashina Elite (which you can find out about in our Sekiro: Shadows Die Twice Ashina Elite guide) and your first real use was probably against Genichiro Ashina's second form (more on that in our Sekiro: Shadows Die Twice Genichiro Ashina guide).

When you do perform it correctly, lightning will strike the dragon for a short burst of damage. Keep heading towards the lightning and using it against it until the dragon pushes you away. You'll likely need to run back once more and fire off lightning at him before the final part of this fight, which is easily the hardest.

As soon as the dragon has one more hit left, it'll blow you back and unleash a huge wave of attacks. Keep defending and deflecting the normal attacks as it's easier to just defend rather than dodge, reserving any evasive manoeuvres for the unblockable attacks. The roots will eventually resurface after a minute of defending, so head to the lightning and trigger the special counter. It'll look like you've messed up, but trust me when I say you should have hit it the final time. When you land, run up the sword and slice its eye open to win the fight. You'll get its memory and the Divine Tears for beating him.

There's only one more mandatory fight in this path and it's the showdown you were likely not expecting. For tips on this final fight, head to our  guide to settle the score once and for all. You can also take a gander at our Sekiro: Shadows Die Twice boss where you can find tips for the many bosses of the game, or look at our Sekiro: Shadows Die Twice True Corrupted Monk guide for tips on that boss fight.