After scratching and clawing your way through Sekiro's Ashina Castle, all that stands between saving your lord is the lovely chap who casually chopped off your arm. As the first real test of skill in the game, you'll need to defeat him the old-fashioned way of attacking him when he leaves an opening, and then dealing with his lightning attacks. It's going to be rough, but we'll get you through it.

In this guide, we'll be going through all of his attacks and what you need to do in order to defeat both phases of this boss fight. There's a couple of things that you can bring with you to make the fight easier, but this fight is definitely a test of skill. Mikiri Counter is mandatory at this point of the game, as is knowledge of how to dodge sweep attacks. 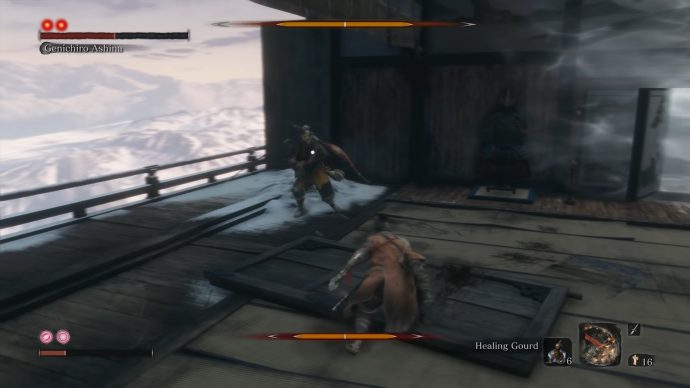 Genichiro has two weapons - an oversized katana and a Yumi, which is a Japanese bow that warriors such as Genichiro would have used in the Sengoku period. He has multiple attacks which are all a sequence of combinations and can use both his weapons.

We'll always start the first phase by firing an arrow, then rolling into a swipe. Deflect both of these attacks. You'll need to bait him into attacking, so attack once, then watch for what he does. If he swipes with his katana twice, he'll then either retreat to fire an arrow, or leap into the air for a slam attack. It's important to not rush him if he's using his arrows and keep an eye on your posture. If it gets too high, try to hit him once more before backing off, so that you recover your posture quickly while his posture is still high.

Your windows of opportunity are slim, but very well telegraphed on his first health bar. As he leaps into the air, prepare to deflect the attack and watch for what he does in the dust. If you detect no movement from Genichiro, but see the symbol, prepare to Miriki Counter his upcoming thrust attack, but if he does move, it'll be a sweep, so dive kick him to counter this. If you need to practice either move, see the man by the shrine and practice the Miriki Counter and countering sweeps until you get used to the timing. Genichiro will also try this without the slam first, so keep an eye out for the symbol when you can. The sweep is far more common during his second health bar, so bear that in mind as he attacks.

One of his more interesting attacks is a sword combination that begins with him looking like he's charging up for an attack. This entire string can be deflected if you get the timing down and contributes heavily towards breaking his posture. You can also hit him afterwards for additional posture damage.

There are also a couple more unblockable attacks to be aware of in this phase. When he looks like he's about to run at you with his hand outstretched. Just get out of his way when he does this as this is a grab that is followed up by a thump to the stomach - causing over 50% damage. He also has a diving sword attack specially for when you are on the ground, so roll out of the way when he does this.

While Genichiro's first two health bars aren't overly difficult, the biggest danger comes from his many arrow attacks. Arrows should always be blocked or deflected and if you want to survive, try not to get too aggressive when he's got his Yumi out. If you back off and start healing, he may charge an arrow shot, which you'll need to dodge, since this does a lot of damage. Damage can stack up if you are hit by an arrow, so it's just not worth the risk. Keep at it and you'll eventually take down his second health bar. But the fight isn't over yet... 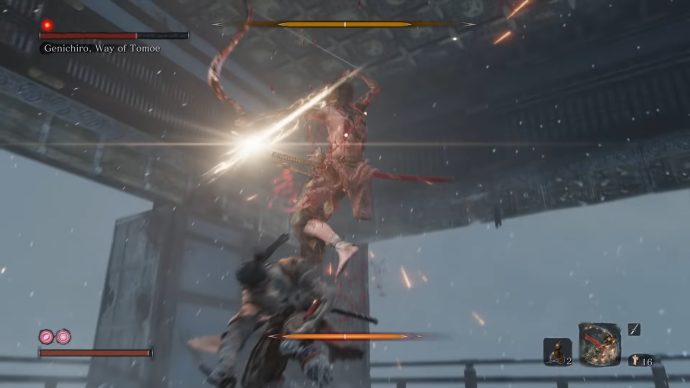 Genichiro has become a bit of a sparkly lad, while at the same time losing his armour. This final phase only has one health bar, but it is the toughest part of the entire encounter. His sword's range is drastically increased and he now has access to lightning attacks, in addition to every attack in his first phase. If you lose this phase, you'll have to restart from the very beginning of the fight, so you have been warned. He'll begin the fight by thrusting his sword from quite a distance, so Miriki Counter it and plough your sword into his side for good measure. When you're up close, he's far more manageable to deal with, even if he is a tad bit more aggressive.

When he looks like he's charging or leaping into the air with his bow, these are his two electrical attacks. One will fire an arrow imbued with lightning, while the other is an airborne swipe with a massive amount of coverage. Getting behind him when he's doing both attacks isn't easy, but it's the safest way to avoid them. Both do put you in the Shock status if they hit. If this ever happens, you might as well forfeit the life as trying to use an eel to recover takes too long and he will likely attack you before you can recover.

There is however an item in the room where you killed the Ashina Elite, that supposedly helps in this phase. If you are ever airborne and hit by one of his lightning attacks, you can retaliate by mashing the attack button before you hit the ground. If you're ever hit, it's because you're too early with your jump. This does a surprising amount of damage to him, but it's far from easy to pull off. Therefore, it's far better to just not get hit and focus on dodging the lightning attacks in the first place.

Eventually you'll get his posture up to maximum by exploiting the same weaknesses - Miriki Counters still work wonders - and thus defeat him. Make sure you attack whenever you see the red kill light, as it'll appear multiple times before you finish the fight for good. You'll nab 2000 experience, Genichiro's memory which can be exchanged at a Sculptor's Idol for bonus stats, and your first Ninjitsu technique - the Bloodsmoke Ninjitsu. These are like combat arts in that you can equip them, but they do use Spirit Emblems per use.

With that test completed, you'll be able to continue with the story. You could head to our previous guide - Sekiro: Shadows Die Twice Ashina Elite if you want to know how to defeat him quickly to get to this fight, or head to our next boss fight guide which is for the far easier fight in the pit where your story began. Head to our Sekiro: Shadows Die Twice Lone Shadow Longswordsman guide to find out more..