Much like other Tomb Raider games of late, the open world nature of Shadow of the Tomb Raider allows for players to explore a lot of side objectives. Missions allow for Lara to attempt to help the locals with their plights to get items, while challenges reward you with extra experience to complete certain set objectives in each area. This guide will go over how to finish the side quests, and the steps for completing the challenges.

Shadow of the Tomb Raider Side missions and challenges guide

The vast majority of the quests you'll receive come from The Hidden City. While some unlock new gear for you to use in your adventure, others just grant you experience that eventually grants you skill points to upgrade Lara's abilities. For all you need to know on skill points, as well as some other tips and tricks for the game, go to our Shadow of the Tomb Raider guide.

Deal with the Pillagers

You’ll see a man knocked downstairs. Talk to him, then talk to Omar who tells you to talk to Marco. Marco informs you that his son is forced to work for the slavers and to head to the edge of town in order to save them. Enter the crypt worksite and defeat all the pillagers, then return to Marco to receive the River Hawk pistol.

Talk to the boy sitting at the foot of the hill near the market square. You'll be asked to retrieve dice from a "dead man". Follow the quest marker to the south west of the city to find the banished man. He'll tell you to seek out the outcasts, four of which are market, while the fifth is revealed after speaking to the other four. These are all highlighted when using Survival Instinct.

The fifth one is a vendor, so before doing anything else, make sure you have 6100 gold to spend on the lockpick and rope ascender skills. If you don't, she'll wander throughout the game to various points of the map, so this is your chance to guarantee getting her wares. Once you've talked to her, head back to Pisco, then the boy to give back the dice.

An old lady near the bridge guarded by cultists will speak of an argument. Speak to the guard next to Jonah in the Skull Cave camp for the quest. Head to the waypoint to Kabil's home to find the cultists have poisoned his crops, leaving his wife ill. His son, Cualli, went to find herbs, so head to the market to find he's been imprisoned.

Head to the cell and talk to the guard, then to Yamil. Climb up the wall next to Yamil to get him to distract the guard, allowing you to free Cualli. Return to Kabil, then to Uchu to complete the quest, unlocking the next step.

After completing the Retrieve the King's Horn side quest and receiving this quest, head to the white tree near the north part of the village with the huge lake. Head through to the cave, avoiding the traps to find bridge.

This will collapse, meaning Lara will need to swim. Raise the water with levers, before tearing down a wooden barricade nearby. Pull the remaining levers, there are three in total, to head out from the ceiling and retrieve the Saviour's Amulet. Return to Ushu to finish the quest. 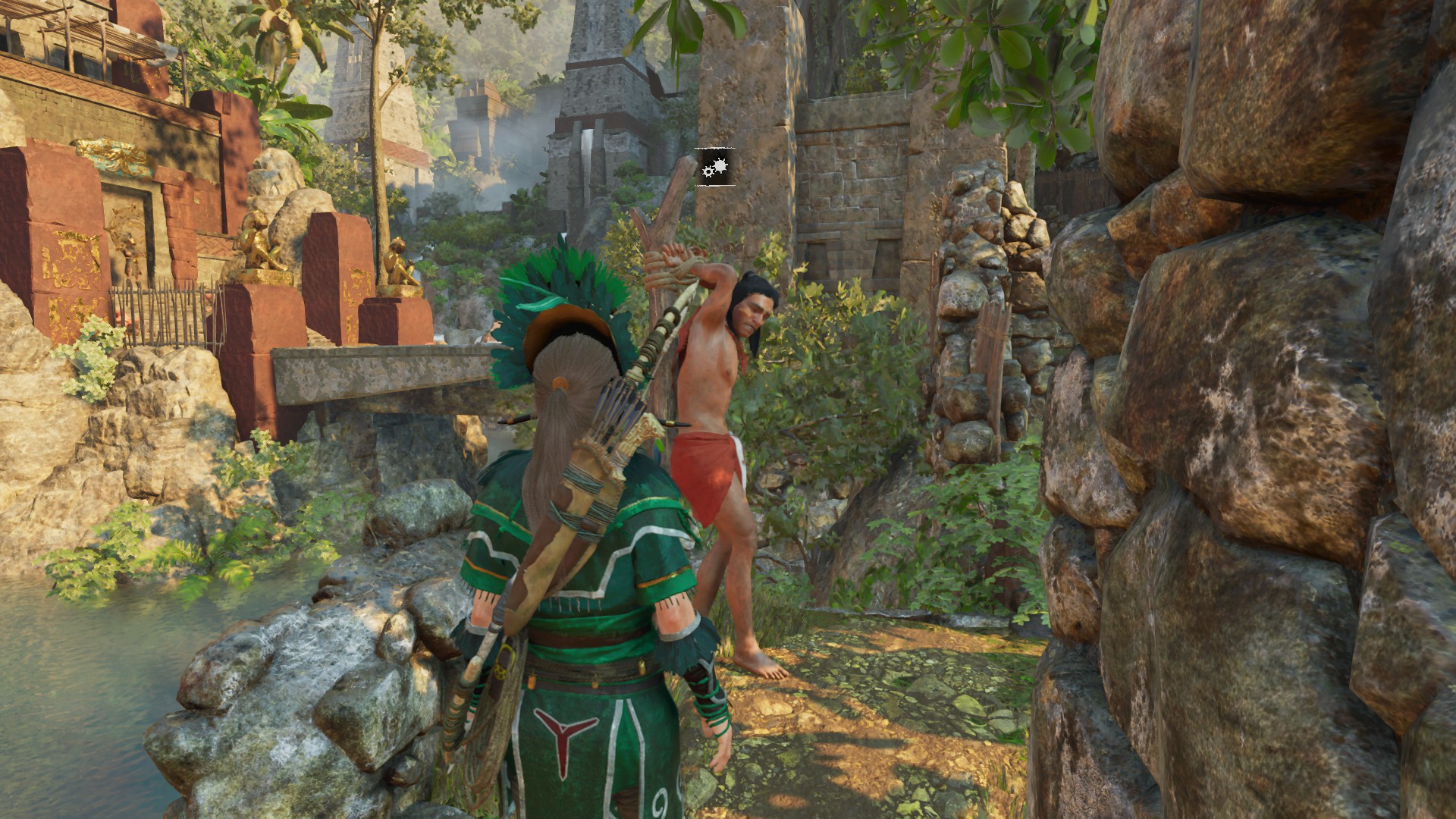 After receiving the Serpent Guaridan outfit from Ushu, look around the cave for this quest giver. All the rebels are in the south western part of The Hidden City. Towards the bottom bridge on the map, one is tied up just north of the bridge, while another is a bit further to the south of it. Follow the path south and you’ll see a small courtyard with a fire. There are some stairs that lead to another campfire, but look to the right as you climb for rebel #3.

From the third rebel, climb up the wall where the water flows down until you see a building with a purple sigil. Head left and up the stairs, looking in the nook to the left hand side for the fourth and final rebel. Head back to Poma who will give you the Ch’amaka Greaves. He will then tell you to find Colqui.

This starts after completing the Free the Rebels side quest. Head to the indicated location on the map and enter the temple. You'll be ambushed as the hinted at traitor turns out to be both the quest giver and Colqui. Just defeat all the guards with the bow to finish the quest.

Have the serpent guard outfit and talk to the guard in the south-west of Paititi to start this quest. Talk to everyone from the widow, suspect, and guards, as well as investigating the body and the drag marks on the floor.

The female housemaid behind bars is also worth talking to, but you'll need to go around the house and climb through the window to her room to directly address her. This requires a bit of platforming across some wooden beams, but once you do, you'll get the clue you need to solve the murder. Return to the guard and complete the quest.

The girl in the small island in the lake north of the city gives this quest. There are three murals which are marked on the map, so interact with them. Return to the girl to find out her father wants to sacrifice her in a ritual for the cult.

Complete the Decipher the Murals quest to start this one. Head to the area marked on the map near the abandoned village. You'll then need to free the girl and fend off the cultists, some of which have arrows. There will be a lot of them, so be patient and bring healing items. Head back to Mayu to finish the quest and obtain the Heart of the Eagle bow. 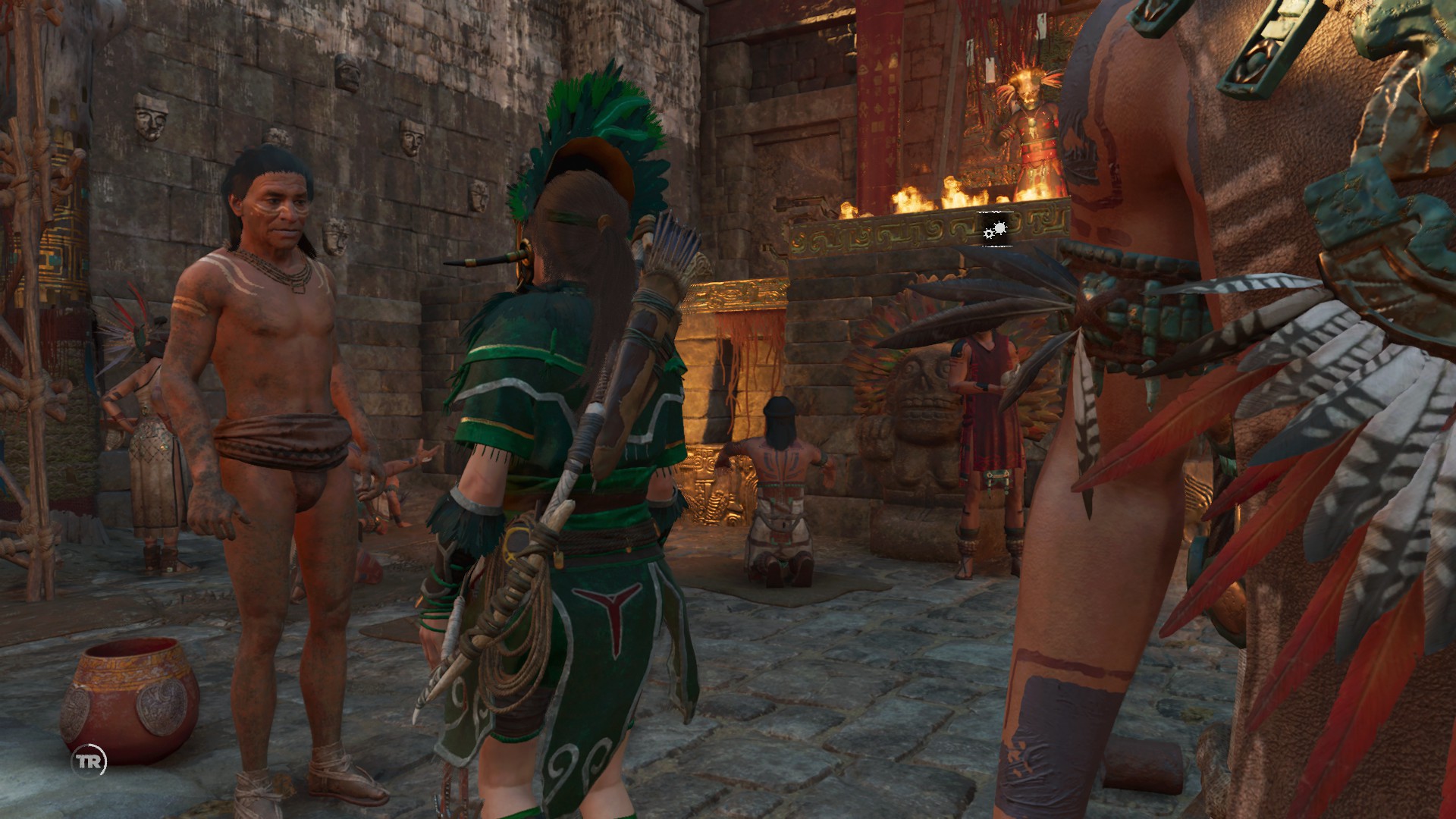 Talk to the girl forced away from the cell inside the Cult of Kukulkan's base. You'll need to then talk to the two chaps sitting down to convince them to join you. After that, have a word with the guy near the prayer group to get him to sound the horn, before getting the nearby musician to get him to play, distracting the guards.

Talk to the two chaps again to get them to open the door and free Hakan. Follow him to finish the mission and obtain a Knife upgrade.

Talk to Uchu before the last part of the story to unlock this quest, after completing both Retrieve Saviour's Amulet and Retrieve King's Horn side quests. Head to the jungle to the west of town, head into the opening in the rock to the new area, which has a cave in the middle of it. Entering the cave, you'll see the bow, but you'll be attacked by a masked Jaguar. Defeat it and approach it to get the bow for real. Head back to Uchu to complete the quest and receive Manko's tunic.

Obtained in: Mission of San Juan

Once the cross is repaired, follow the crosses around the town until you get to the final one next to San Juan's crypt entrance. This will have a switch. Explore the crypt to find Isabella. 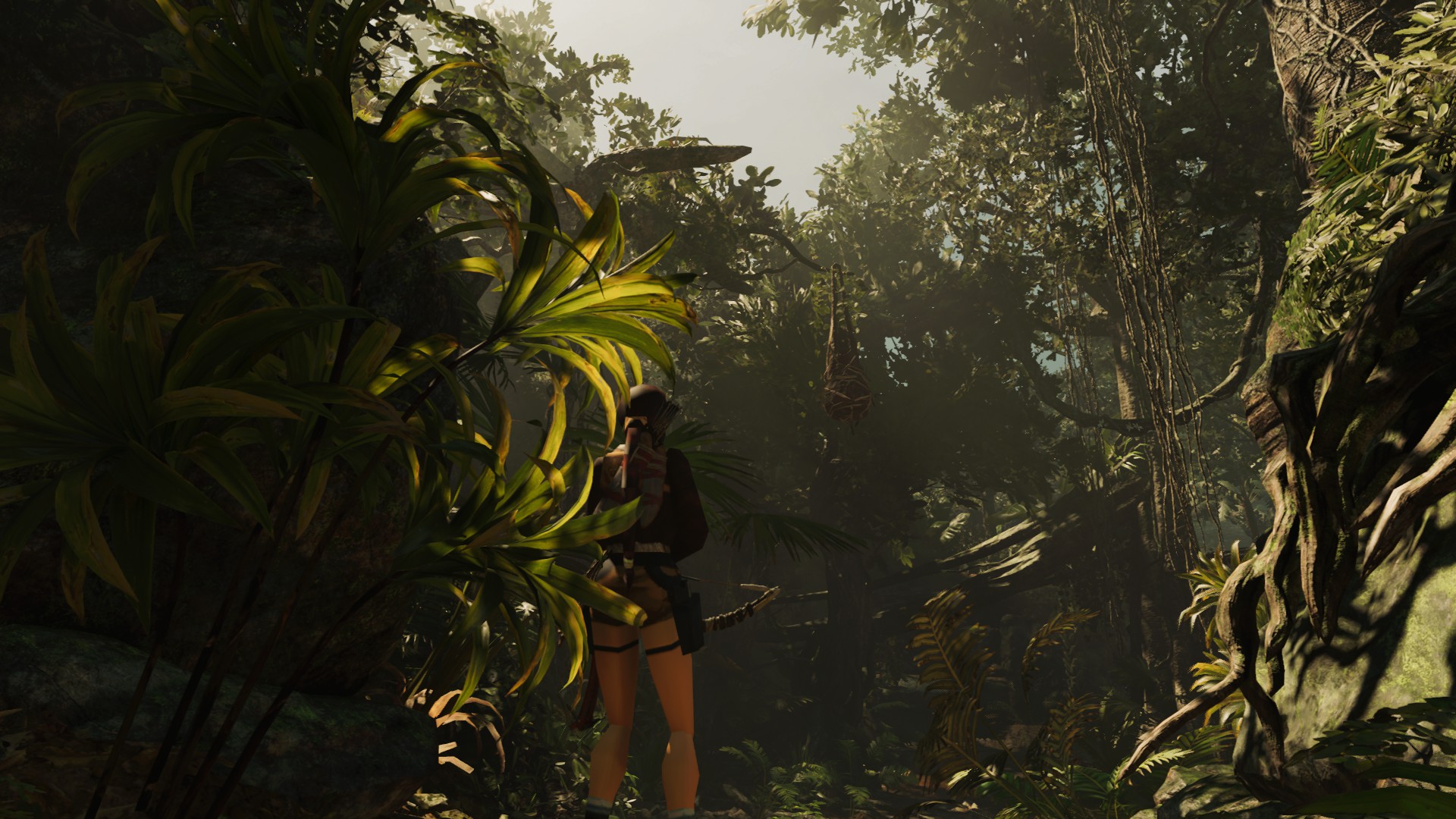 Shadow of the Tomb Raider Challenges

There are also a fair number of challenges in Shadow of the Tomb Raider for each area. Some are relatively simple affairs such as collecting items or shooting down emblems, but others require a bit more of a keen eye and exploration to complete. As a prerequisite to attempting these, I recommend nabbing the perk that allows you to see these objectives in Survival Instinct mode. It's able to be unlocked from the start of the game provided you have the Skill Points. Below are the full list of challenges, 16 of them in total. Each has descriptions of how to complete the more complicated ones, which can be lengthy, so enter the challenge name into the search bar at the top of the table, or click through each page to find the challenges you are looking for.

This concludes our side quests guide for Lara's latest adventure. If you'd like to see more on the challenge tombs themselves, you can head over to our Shadow of the Tomb Raider challenge tomb guide for the steps required to complete all the optional tombs in the game, and the perks they unlock.

More On Shadow of the Tomb Raider