If you click on a link and make a purchase we may receive a small commission. Read our editorial policy.
Developer: Ys Studio
Publisher: Deep Silver
Release: Out now
On: Windows
From: Epic Game Store
Price: £45/€50/$50

Nothing better captures the magic of Shenmue III than its save files. On one line, the current date and time; above it, the date and time this particular save will whisk you back to. Because that’s what Shenmue is: time travel. The opportunity to visit a very specific moment in history. In the case of Shenmue III, China in the spring of 1987. Of course, it’s time travel that doesn’t fret about the butterfly effect - you spend most of your trip kicking in groins in a way that will surely curtail a few family lineages.

But this sequel is time travel of a second kind, too: a design throwback to 1999, when Shenmue was the cutting edge of blockbuster game development; then the most expensive game of all time, and one that remained so cherished that it raised 6.3 million dollars in a Kickstarter campaign. That's 6.3 million dollars worth of permission to not change a thing, and so it has largely turned out. Does the ageing design hold up and can it make converts 20 years on? Here's wot I think.

Shenmue III sure is a Shenmue game. When you aren’t feeding shoe leather to local hoodlums, you’re wearing it down in the streets and countryside you explore as you endlessly pester NPCs for gossip. Most of Shenmue's design hinges on existing in the pre-internet age; it’s a detective story that could probably be solved with two Google searches, stretched into a 30 hour trek round the houses. Certainly Google Maps would cut playtime in half; much of that time is spent asking for directions. 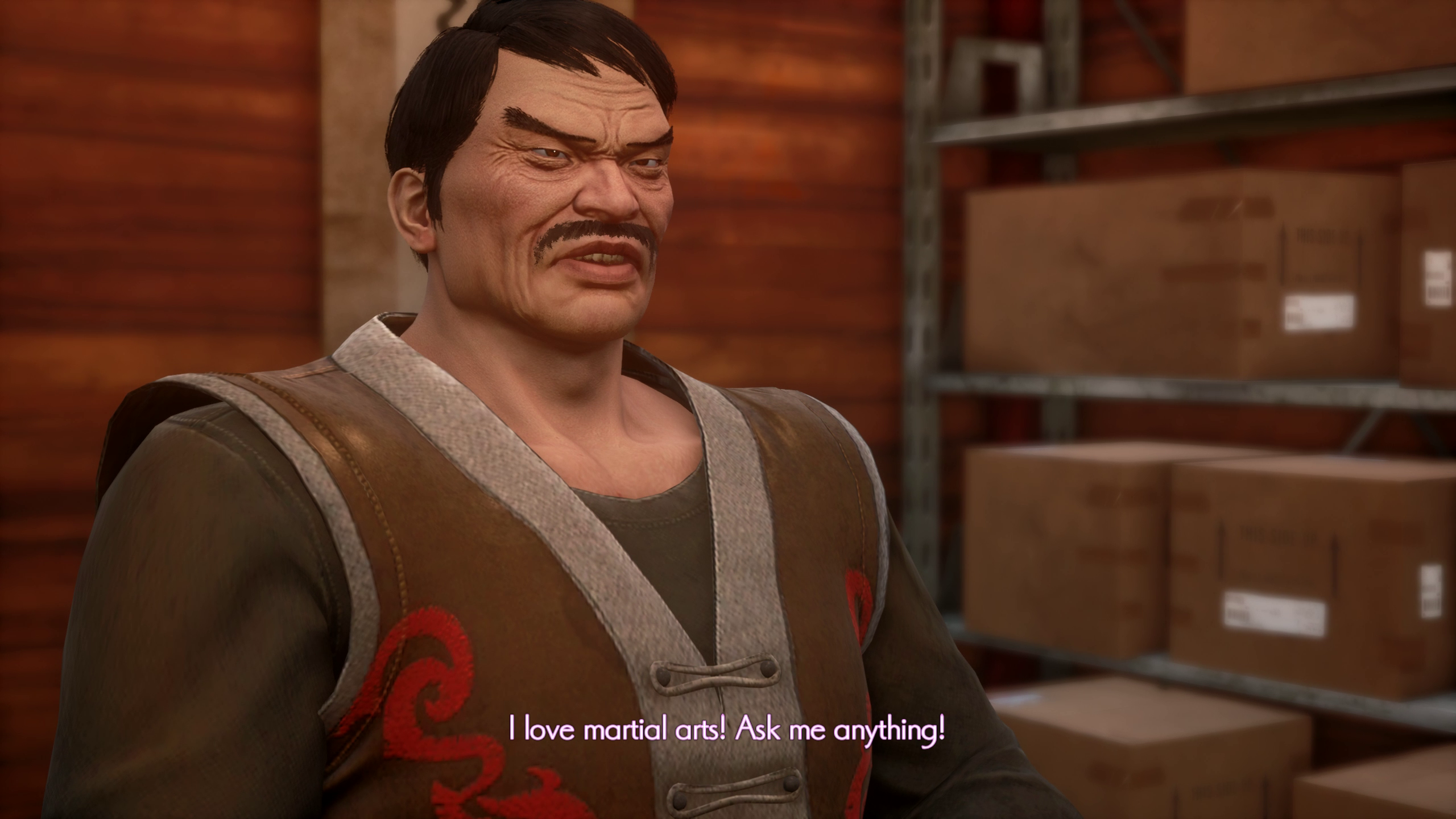 This sounds terrible, yes, but there’s something hypnotic in the way the to-and-fro sucks you into the world. Simply registering which house belongs to who, or where residents can be found at different times of the, day forges a bond. You begin to think like a local. Dependence is gradually swapped for expertise - where the best wine is sold, which elder is the least senile - and the excitement of holding your own in a foreign land helps disguise the relative mundanity of the tasks at hand.

It’s striking how few games have attempted similar. There are hints of it in recent Ubisoft adventures, where quest markers can be swapped for naturalistic directions, but it still feels more lived in here. The fact that every NPC has to have a voiced response to young martial artist Ryo’s every question suggests why few designers have repeated it, though, and Ryo’s own generic replies - “I see!” - soon begin to grate. Much goodwill could be earned with a dialogue skip option for this endless small talk.

And the style definitely works better in the first half of the game, set in the rural Bailu Village. With its small community it’s much closer in tone to the original Shenmue’s Yokosuka. Every NPC is a named character, most play some part in Ryo’s tale, and lodging with your fellow sleuth Shenhua gives you a comfortable base to explore it all. The later port town of Niaowu loses some of that magic with its non-interactive shoppers, restricted routes and daily demand for hotel fees. Especially scary as the lady who runs the hotel seems to have no connection between her teeth and face. Throughout Shenmue III there’s a gulf between the handsomely modelled central cast and everyone else, who appear to have escaped a budget Dragon Quest. 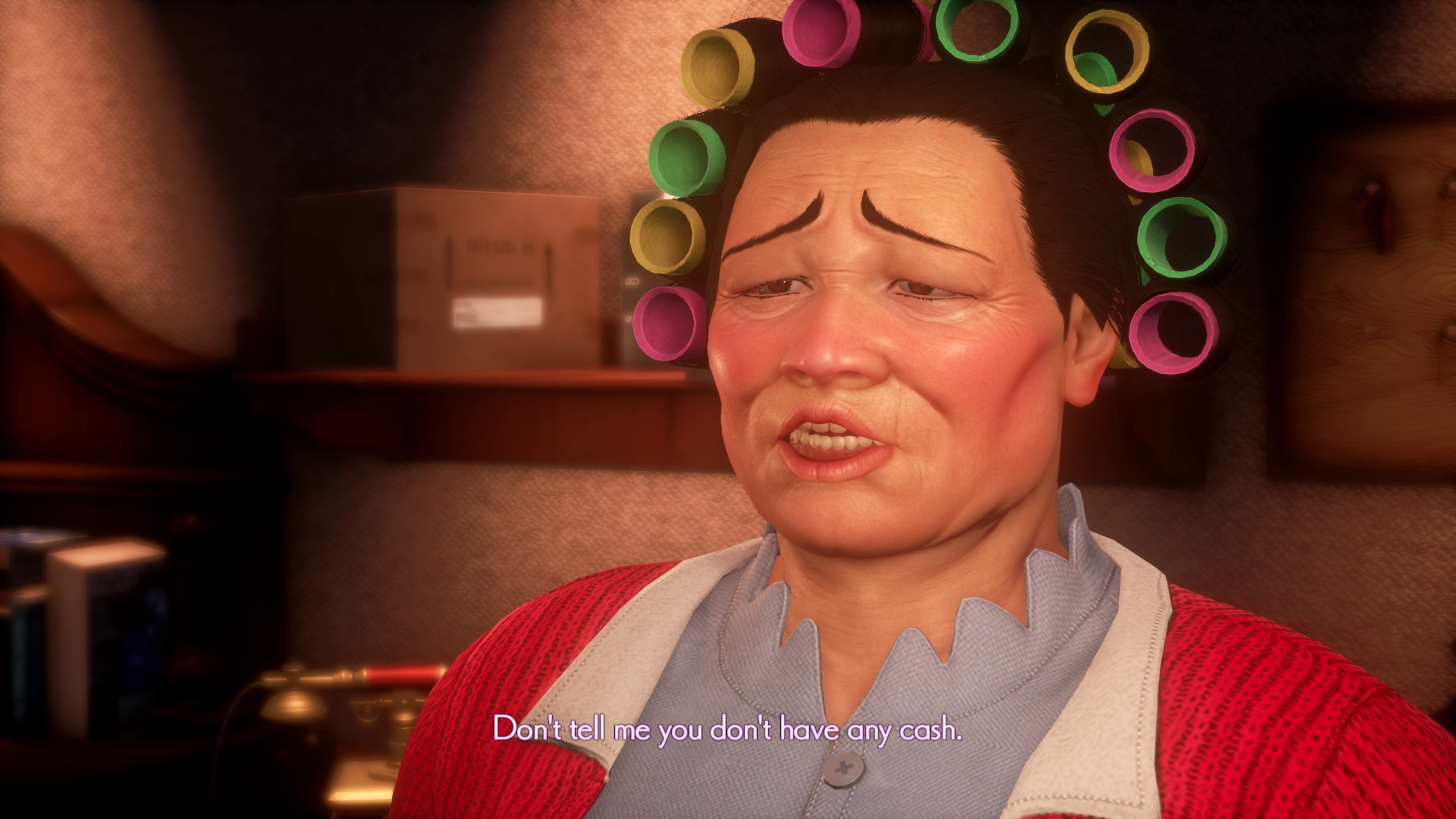 Shenmue III is technically a quest for revenge, as Ryo Hazuki is still looking for the man who killed his father in Shenmue 1. But it’s relaxed revenge. Creator Yu Suzuki is more interested in the rhythm of everyday life than the thrum of a Hollywood thriller. This is a world where investigation happily pauses for week-long fishing trips or part-time wood chopping. The inclusion of two brutally pricey quests practically forces the latter, slamming the brakes on the story to become a menial job simulator. Likewise the cash drain of feeding your stamina/health bar, which leads to odd moments of wolfing down garlic bulbs because they’re the most cost effective foodstuff. It's probably for the best that Ryo is so stilted around his love interest - his breath would eat through the back of her head.

With that relaxed pace comes an invitation to fully submerge yourself in the world, to get to know two relatively small open worlds (by modern standards) in intimate detail. As before, this means opening drawers and cupboards to poke and probe the domestic detritus of 80s China. Spoiler alert: it’s mostly nondescript jars. The first-person camera is slicker this time, smoothly segueing into item interactions, but it still boils down to a rather bored sounding voice actor saying “interesting!” at the seventh set of forks he’s uncovered that day. 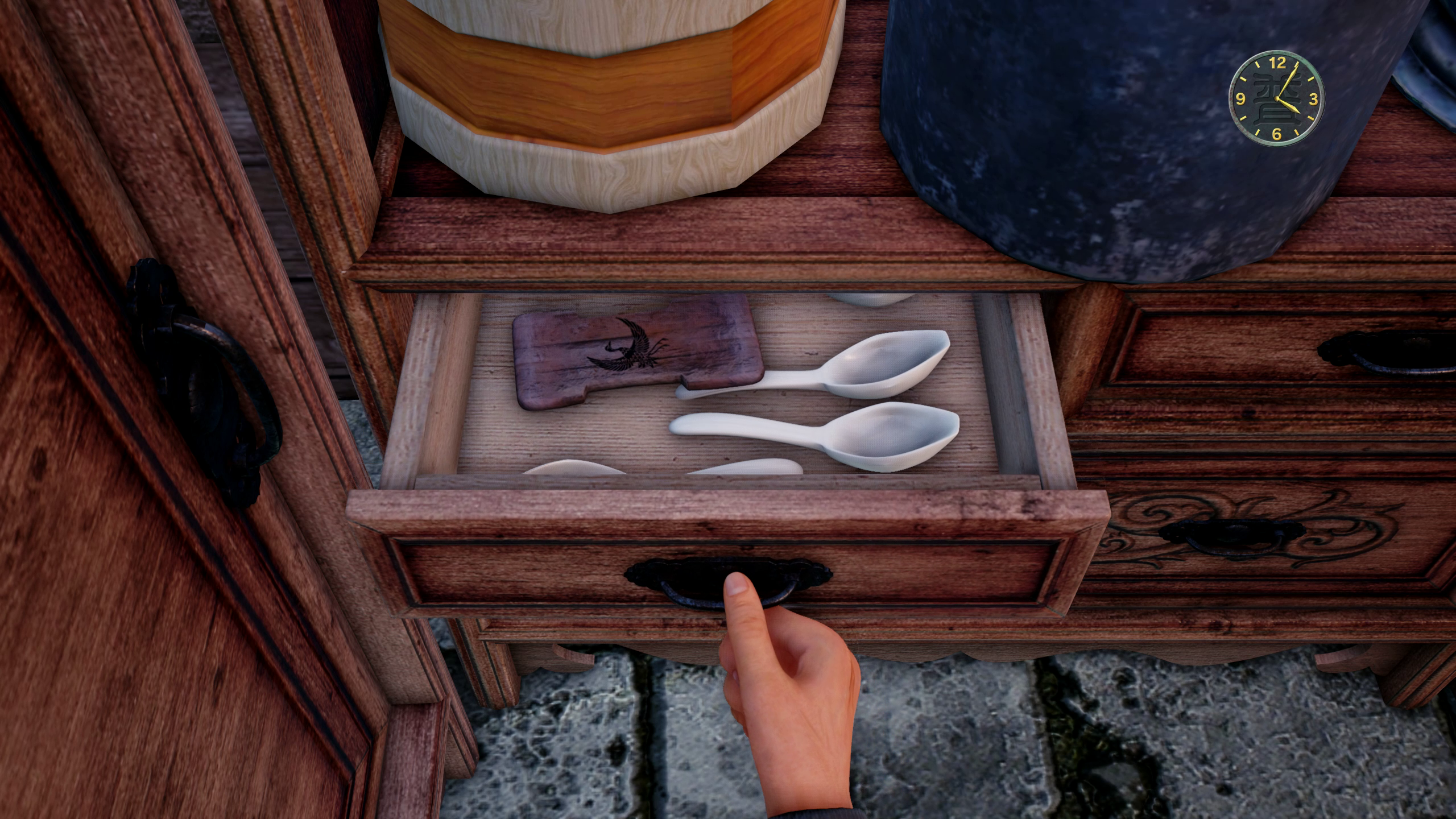 This same system once felt like a mad vision of the future - I remember reading previews of Shenmue in GamesMaster, where talk of fully interactive furniture gave the impression that Suzuki had somehow cloned the entire world. You could pick up a cassette tape from a sideboard. As if! (Like interactive shelving, proclaiming ‘as if’ also seemed cool in 1999.) But where that accuracy was noteworthy in Shenmue, and its fetishisation of those details warranted, Shenmue III’s fidelity doesn’t meet 2019’s standards. As grossly unfair as it is to compare Suzuki’s small team with the Rockstar Games behemoth building Actual Westworld in your TV, the bar for realism has been raised, and Shenmue III often looks threadbare.

No, it’s far more potent when it reheats the deliberately artificial elements of the original games - the bits of the world clearly built by one of Sega’s great arcade masterminds. For all these games attempted to simulate life, they also featured silly collectible capsule toys, working arcade machines and forklift truck racing. And so it is here. Sure, the officially licensed Sega machines are gone, but those that replace them quickly gobble up your pocket monkey. I particularly like how delivering arcade cabinets in the forklift truck job sees more games arrive in the local arcade, even if they are variations on a slightly ropey parody of Virtua Fighter starring chickens. 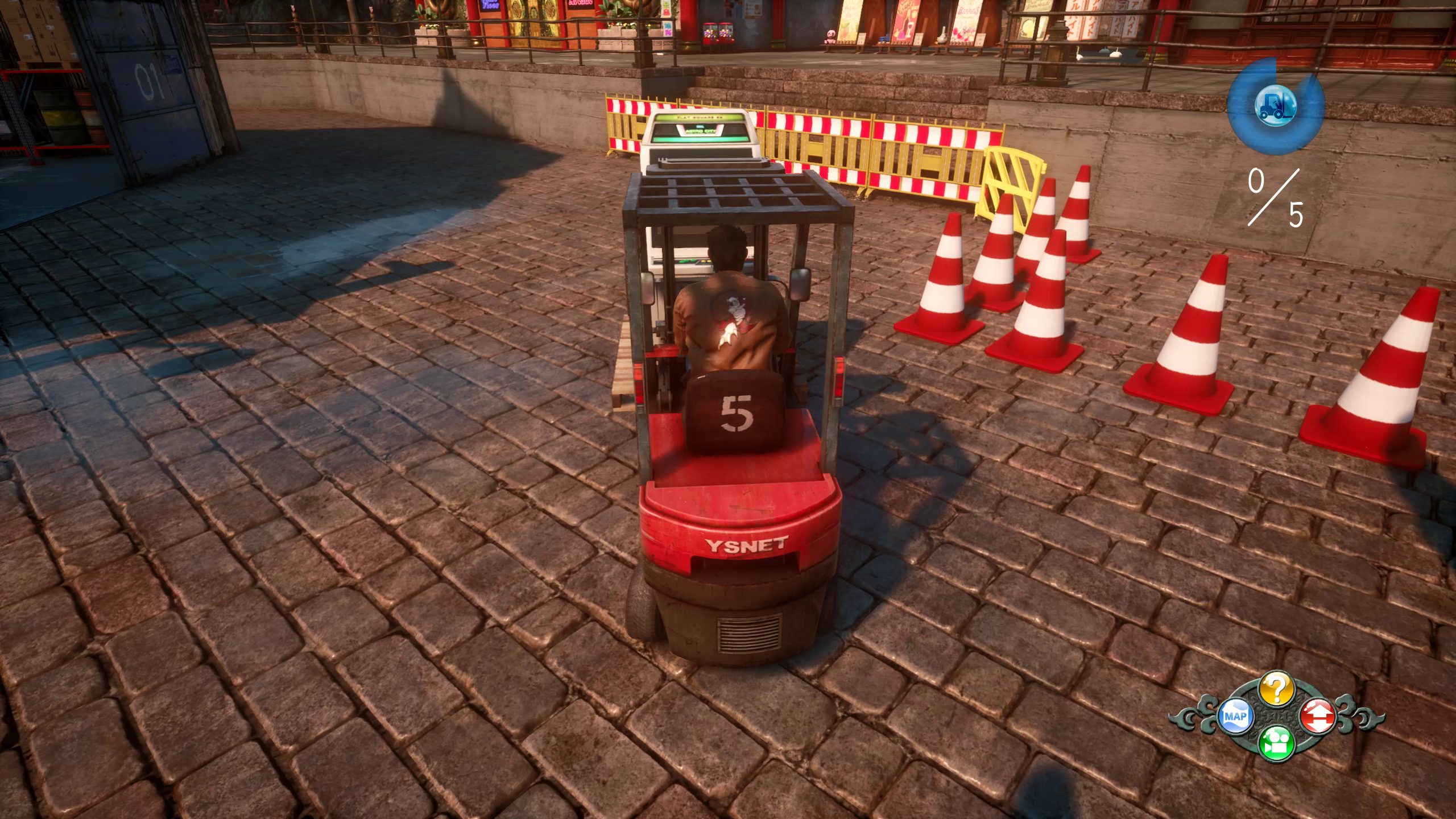 The downside to the density of arcades and gambling dens is that the world, particularly Niaowu, does begin to resemble a strange funfair, designed to bilk you every ten meters. The effect is made extra weird when you start finding the Kickstarter content - the faces of backers pasted on fairground games, a giant temple full of backer portraits (with some unintentionally hilarious commentary from Ryo) - which, while sweet, does butt heads with the historical authenticity that these backers were investing in. Every time I open my inventory and see a load of random dudes jangling in my pocket as gachapon, it’s hardly immersion building.

At least those collectible toys now serve more of a purpose, as you can sell complete collections at pawn shops, or swap them for martial arts techniques. And the latter are important because without new skills to learn you can’t spar with local fighters, and without sparring you can’t raise your attack level, and without raising your attack level you can’t hope to take on the hoodlums who block your progress at key moments of the story. This A to B to C martial arts training logic is the biggest addition to the game, an attempt to create more of a martial arts RPG (this was, incidentally, the original pitch of Shenmue - a Virtua Fighter RPG). 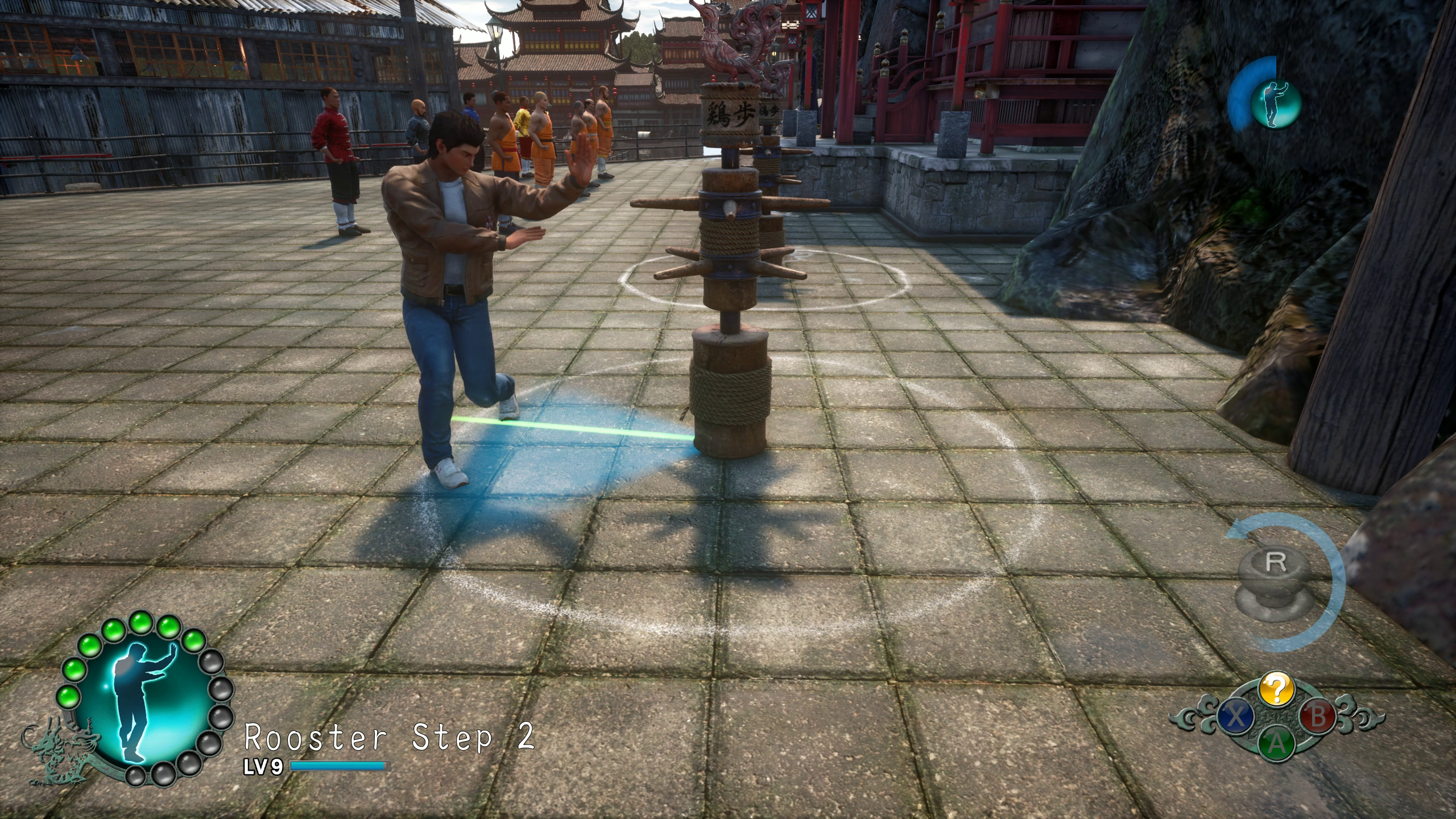 To call Shenmue III an RPG is a little generous, but it does give more shape to the hours of downtime you have during each day. This is time you could spend raising endurance by playing a couple of sparse minigames - in one you tap a button to hold a squat, in another you rotate the analogue stick to shadow Ryo’s movement. If the aim was to capture the utter tedium of exercise: mission success. In fact, in a weird moment of art imitating life, I found myself having to pop on a podcast (in real life) to help endure the boredom of grinding these games, which is exactly what I have to do to get through my biannual cross trainer session.

The combined effect of the exercise grind and the endless hustling to raise money for new skills is that of a training montage played out in real-time. The meat of Shenmue III’s 30 hours (and that was taking it at quite a pace) is preparing your body for a just a handful of fights. Yes, there are dojos where you climb the ranks, but the actual story fights, the moments you’re encouraged to train for, number less than 20. In many ways it’s the perfect Shenmue system: an incredibly slow series of baby steps towards not a whole lot. A lot of the time I admired its zen-like refusal to pander to overblown action, but others will find it unbearable. 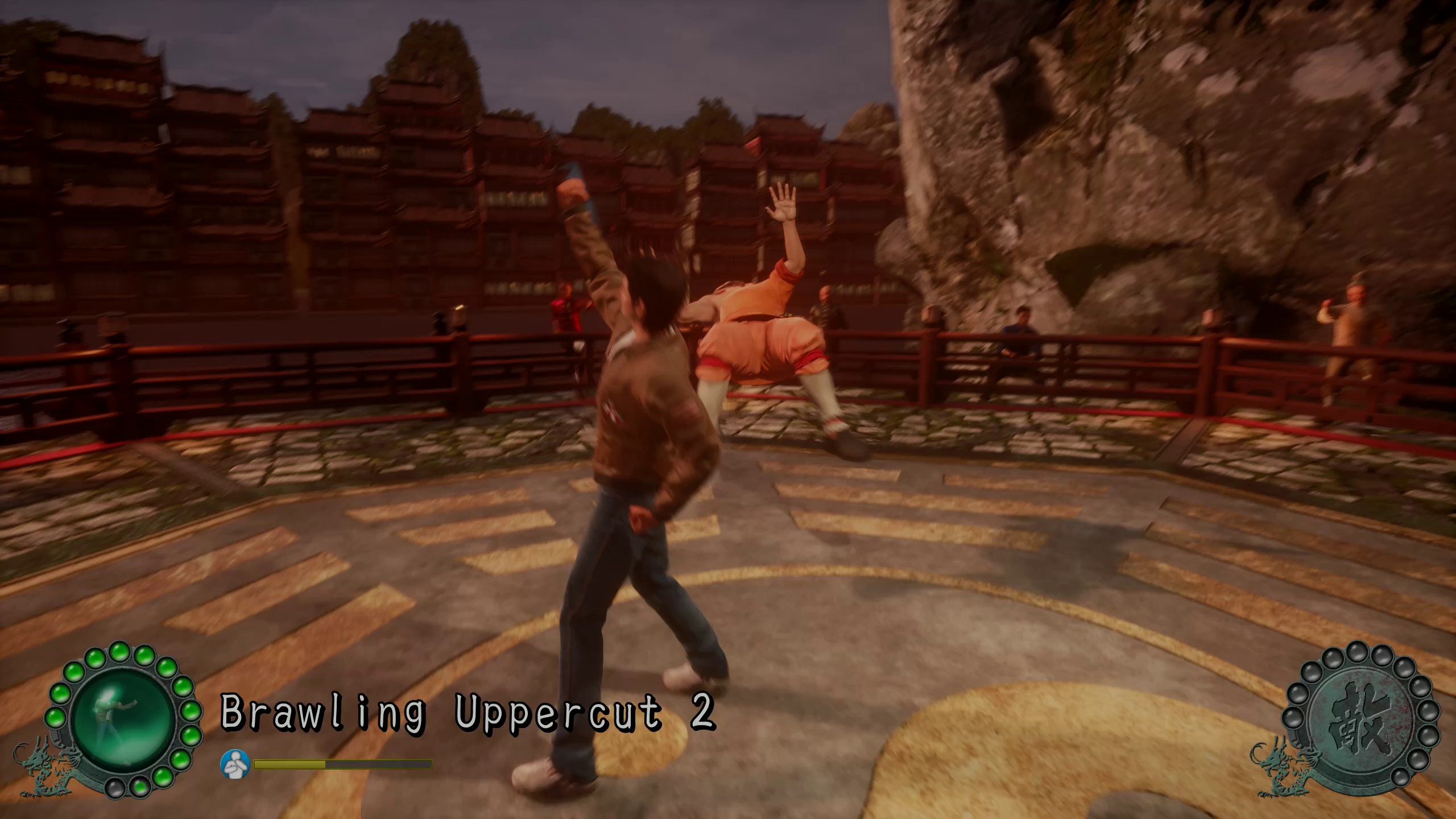 It’s also a shame that a story centred on training (by the end, you’ve achieved little else) is lumbered with quite a crude combat system. Alarm bells sound when the official tutorial tells you to mash the face buttons. There's more to it, with strings of complex combos that can be handily mapped to a button for automatic kung fu wizardry, but strategy never really goes beyond ‘hold block’ and ‘unleash auto-combos after the enemy’s failed attack’. All that training manifests as a longer health bar and higher damage, and even that can be circumvented by glugging health potions mid-fight. There’s no real sense of mechanical mastery, which is baffling given how much of the story is spent extolling the virtues of technique.

The mad thing is, for all its creaky ideas and garlic guzzling, I was enraptured for chunks of Shenmue III. Its laid back rhythm lulls you into a state that few games do, one of such extreme zen/boredom that even the smallest change in pace can feel monumental. Moments like my evening chats with Shenhua, where unspoken romance threatened to bubble to the surface only to be gulped back down with teen embarrassment. Or happening upon the soulful young man philosophising about the turtles he forces to race in his gambling den. Or chicken chasing for a drunken master. Or the moment I discovered a series of hidden bird mascots in a shop, transforming the entire shopping district into a quirky scavenger hunt.

There’s magic in Shenmue III, then; not as potent as when this oddball adventure first burst onto the scene, but kept alive by the sheer lack of anything else like it. (Yakuza is often seen as a spiritual successor, but it’s more Shenmue meets Streets of Rage - if you like the idea of virtual tourism, but want to crack more skulls, go for that series instead. Yakuza Zero is the place to start.) This is an often boring and sometimes brilliant game, where the brilliance depends on the boredom. If that’s too risky a pitch for a full-priced ticket on Suzuki’s time machine, maybe try the originals first (both are on Xbox Game Pass for PC). For better and for worse, Shenmue III is a perfect continuation.