Casually fulfilling its destiny to become the videogame that consumes the rest of my life, ultro-superb CCG/roguelike combo Slay The Spire just introduced its third mode, the Daily Climb. It's about the most logical move Spire could have made, adding a daily challenge mode of the type popularised by Spelunky and The Binding Of Isaac (even big ol'XCOM 2 was inspired to do it, though the sadly the take-up hasn't been great).

The Daily Climb isn't a straightforward once-per-day fixed map, mind you. The Daily Climb applies weird'n'wonderful modifiers not found in other modes to the run - how about an Ironclad build that wields Silent cards, for instance, or the contents of every point on the map being a mystery?

Here are the modifiers applied to today's inaugural Climb, actually: 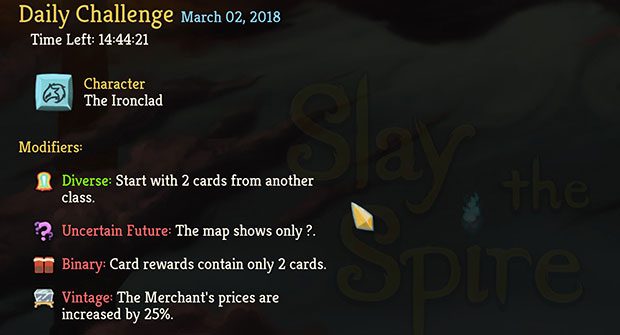 It's a surprisingly sweet setup - my Ironclad was blessed with two of The Silent's Bouncing Flask cards, which meant they had a whole lot of poison added to their high-damage mainstays. It was enough to see me blitz through the first floor with barely any damage, and I began to dream of top-10 leaderboard placements.

The wheels came off on floor two, where I was almost immediately greeted by lads dealing 27 damage a turn, and that's where not being able to see what each new map point would contain became a serious handicap. I needed a campsite or maybe a merchant, but instead managed to wander into three Elites in quick succession, and that was that. 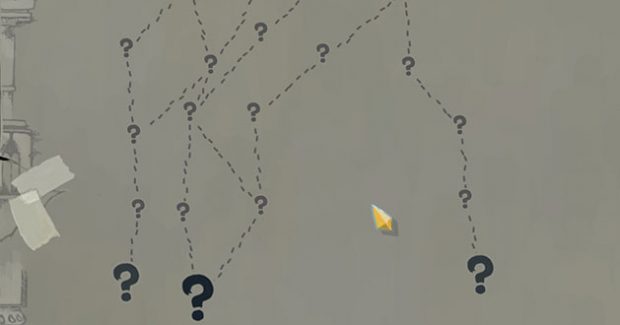 It's my only slight reservation about Daily Climb, or at least today's take on it. The obscured map markers aren't a test of skill, but of pure luck. Another player who stumbled into a campsite earlier or a treasure room with an excellent relic would have had a completely different floor two experience to me.

But I don't mind really - I'm too happy that the game I'm currently most in love with (though these affections are torn between Spire and Into The Breach) has just given me a new reason to play every day. Ascension mode felt like going through the motions, but stuff like cross-class cards will keep things much fresher.

Devs Mega Crit note in today's patch notes that "This a work in progress and modifiers will be added and tweaked, randomization will be reduced, and leaderboards will eventually be added as well", so hopefully stuff like the above gripe will be finessed over time. The lack of leaderboards at present is a bit glaring, but for now Daily Climb survives entirely effectively on the pleasure of getting to play a remixed game.

The new early access update also adds some extra music, localisation for Brazilian Portuguese, Norwegian, Polish, and Thai, as well as assorted minor bug and UI fixes, which you can read about here.