Space Warlord Organ Trading Simulator, announced last week with an extraordinary trailer, does largely what it says on the tin. "The information is in the title," says its Steam description, blatantly written by developer Xalavier Nelson Jr. "There are slickened, detached meat products derived from alien and human bodies, and you sure do buy and sell them". That's that, then. But in a surprising exclusive, I can also reveal to you that SWOTS currently supports the Xbox Kinect (2010) as a control peripheral, plausibly making it the final Kinect game.

It's not clear why this is the case, since Space Warlord Organ Trading is a management game. Partly inspired by Market Crashers, a game developed for the Nintendo 3DS StreetPass system, it revolves around short, intense rounds of play, each representing a day's trading in an organ market driven by the requirements of Space Warlords. It is played via an eye-hurting yet still pretty green-on-black UI, that looks like an upsetting sci-fi version of an 80s stock trading terminal. And again, it can be controlled with an obsolete motion tracking system. Thankfully, it also supports supports mouse and keyboard.

Currently, there are 31 organs in the game, although Nelson says this is scalable, and may change "if I finally wake up in the dead of night and decide, once and for all, that teeth are actually an organ". The current roster of innards includes familiar human parts like hearts and pancreases, but also weirdo alien organs that interact in difficult ways if you store them together. It is all a lot less gory than it sounds, although it's still impossible to describe the game's aesthetic without using the word "pulsating". 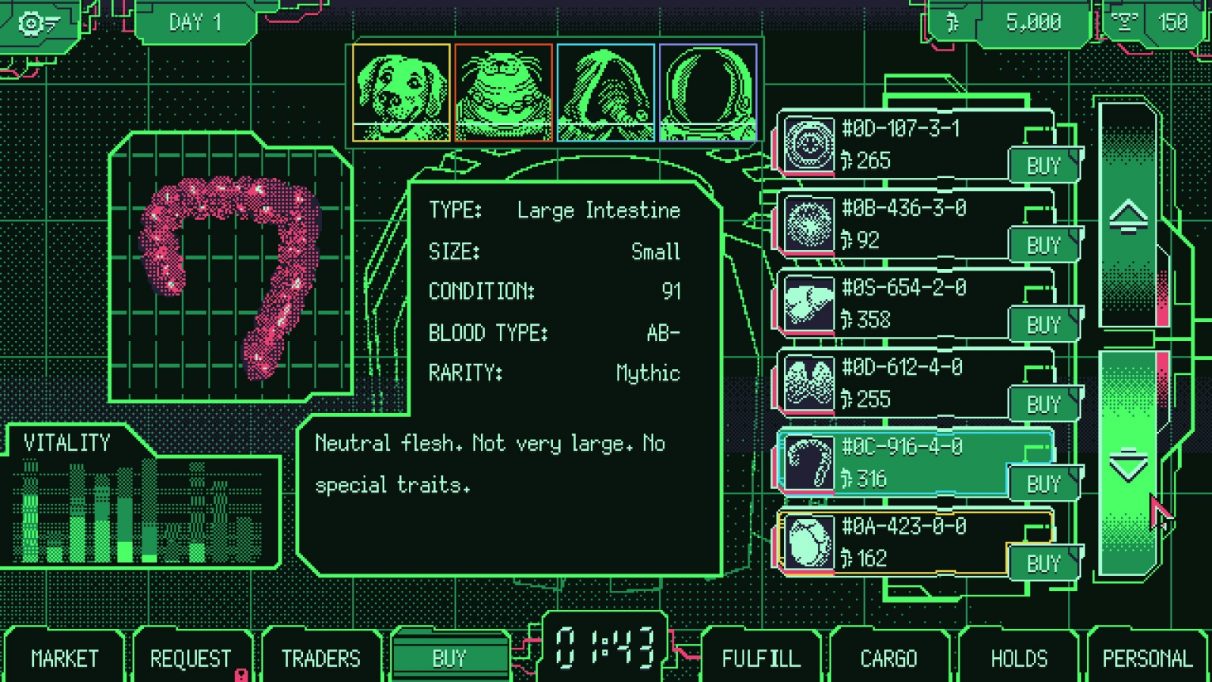 One of the Space Warlords is a dog called Chad Shakespeare. Nelson told me about several others, but it only dawned on me quite late in the interview that he was potentially doing a bit about Space Warlords who supposedly existed in our reality, without breaking kayfabe for a moment. Honestly, it's quite hard to talk about this game without sounding like I made it up. But to be fair, it does look right up my street.

All this is probably to be expected from Nelson, a man of relentless enthusiasm, who believes in riding a concept until its wheels fall off. He is developing and publishing SWOTS as Strange Scaffold, under which label he is also currently working on An Airport For Aliens Currently Run By Dogs. For this project, Nelson has contracted work from Ben Chandler of point & click specialist studio Wadjet Eye, pixel artist Julia Minamata, composer RJ Lake, artist Judith McCroary, and VR developer Sam Chiet, of Desktop Goose fame, who is apparently responsible for the Kinect thing.

SWOTS will be with us on Steam at an unspecified point in 2021, at which point you'll be able to buy and sell all the organs you like, as well as - in Nelson's words - "finally realising Microsoft's hardware dream of plucking an organ out of the air and moving it with your hands".

Disclosure: Xalavier Nelson Jr has written for Rock Paper Shotgun on many occasions, and is close friends with Ghoastus.