The Steamlords at Valve have rummaged in their reams of data and emerged with a new blog post talking about what the growth of Steam (and the number of games on Steam) has meant for developers. Coming up with a questionable definition of "success", they note that Steam in 2019 saw three times as many games earning $10,000 in their first fortnight compared to Steam in 2013. They went on to estimate that if they had kept Steam's catalogue curated and tightly controlled, a whole lot of games they consider successes wouldn't have even been released on Steam. So, that's good? Also, obvious?

"We are constantly examining how the growth of Steam affects new titles and what it means for developers," Valve say in the Steamworks blog post aimed at folks selling games on Steam. "Usually, our own internal questions mirror those of many in the development community." The unspoken implication is that this time they've looked at whether concerns ober whether Steam adding more and more games to its catalogue has scuppered developers' chances of success. Warning: graphs are involved.

In this datablasting and speculation, Valve define success as "earning over USD$10,000 [about £8k] in the first two weeks after release". To give an idea of what they means in the long term, they go on to say that "most recent games earning around $10,000 in the first two weeks earned between $20,000 [£16k] and $60,000 [£48k] over the course of 12 months following release." By this metric, hey look, Steam's successes have kept on growing as its catalogue has kept expanding. 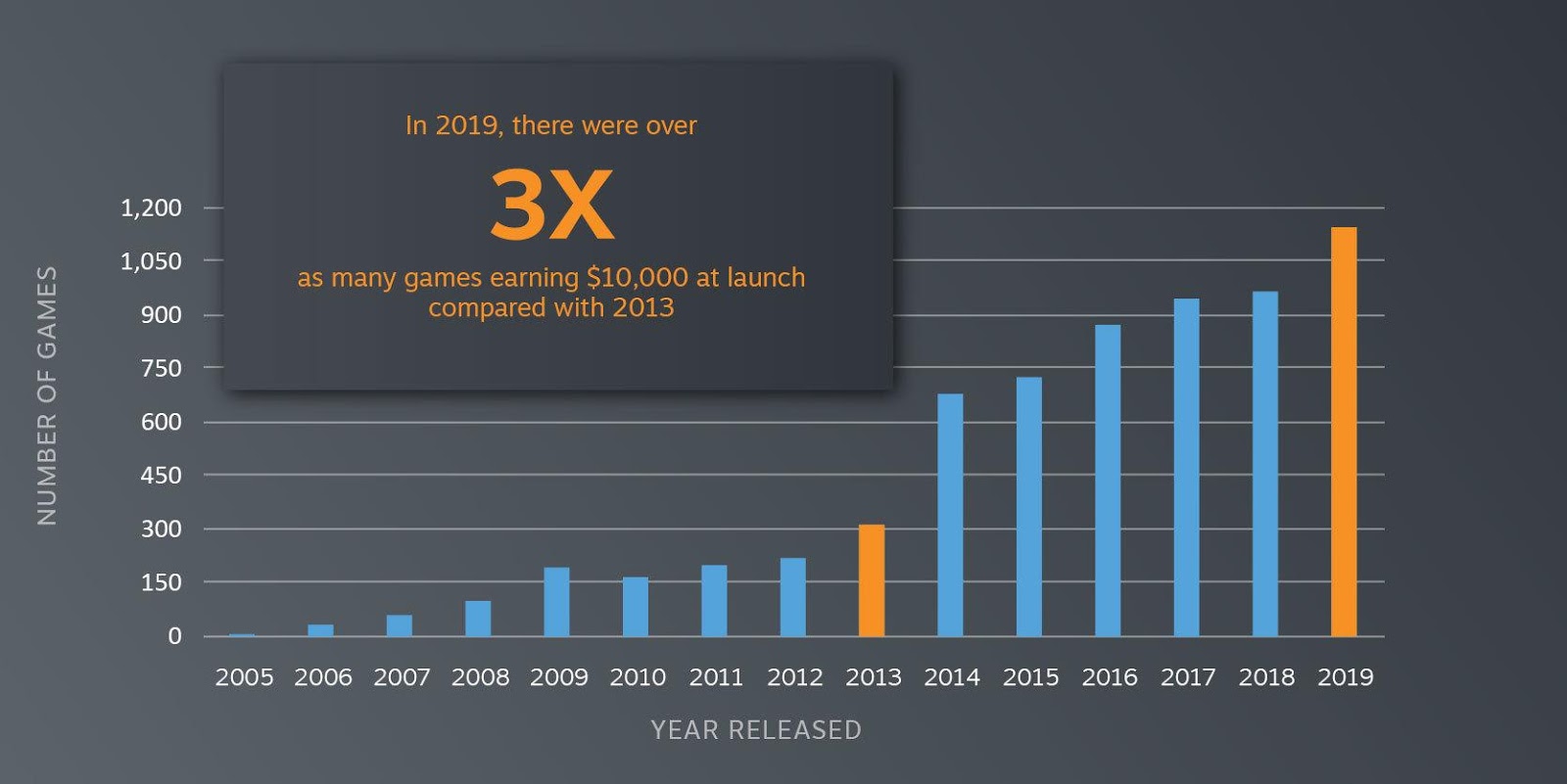 $10k in the first fortnight then $60k in the year sounds like a pretty grim measure of "success" to me. $60k is not a lot of money unless the dev team is tiny, their living costs are cheap, the game was quick to make, or they're supported by other means. That's why game development is a part-time pursuit for so many, I suppose. Maybe this metric is more "not complete and utter failure" than it is "success." Or maybe that is relative success when everyone has a fair-ish shot.

Valve go on to speculate about what might have happened if they had kept Steam tightly curated and only allowed a trickle of new releases, rather than open it slowly with the Steam Greenlight voting process starting in 2012, Greenlight accelerating in 2013, then the store opening right up with Steam Direct.

"The dashed line in the graph below estimates what the trend would have looked like if we hadn't increased the quantity of games accepted to the platform in mid-2013," they explain. "Assuming the trend was stable, it suggests that opening the platform more than doubled the number of releases meeting the $10K benchmark each year. While we can't say for sure, we think the green portions of the bars above the dashed line are, largely, games that would never have previously found success on Steam... because they never would have been released on the platform at all." 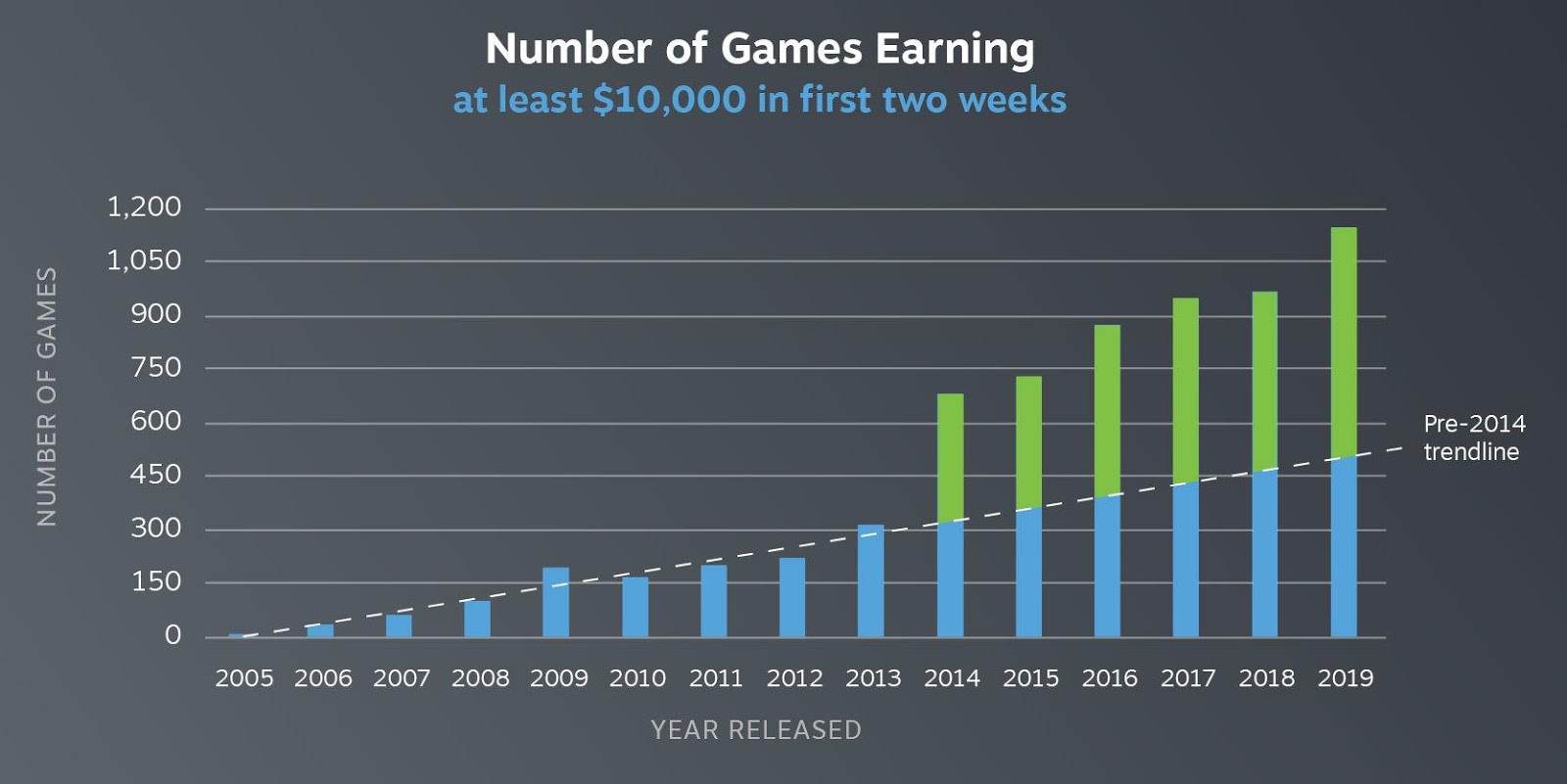 For a different idea of success, Valve do share a research appendix with graphs for games earning at least $5000, $50,000, $100,000, and $250,000 in the first fortnight. The estimates with higher numbers broadly show a similar pattern that yep, loads of successes would also not have been on Steam.

So if Valve had continued to run their store in a daft way (and it really was daft), the outcome would have been worse. Gotcha.

Do take all Valve's numberblasting with a pinch of salt because: 1) This is aimed at developers; 2) These are estimates; 3) The estimates are built on variables Valve control; 4) Valve have a strong interest in making their decisions look good - especially with the Epic Games Store making a big selling point of being curated rather than open; 5) Graphs are horrible tbh and should not be encouraged.