Games have a habit of placing the player at their centre. Their worlds and the characters in them revolve around you: you're the chosen one, the only individual capable of saving the day. You might have extraordinary abilities, and be a figure of legend - or at least one in the making. That isn't necessarily a barrier to telling a great story, and it's part and parcel of the power fantasy that many games seek to offer. Nevertheless, it does mean that when something comes along that subverts that typical relationship it captures my attention.

Storyseeker is a short, free exploration game where dev Miles Aijala describes your role as "more of a historian than a hero". I've just spent half an hour pottering around its surreal world of ghosts, giants and weasels, and I reckon you should do the same.

The more I tell you about it, the less you'll have to discover for yourself - which kind of defeats the point of playing "a minimalist narrative experiment driven by your curiosity", to use Miles's words again. So if you're already on board, I'd recommend skipping the rest of this post and just jumping straight in.

For those that still need more convincing or just can't help themselves, I'll tell you about a few of the things I saw in just the first five minutes. You're free to wander in whichever direction you like, so I decided to venture West into a strange, psychedelic landscape. The ground became laced with swirling colours that caused the music to swap to discordant jarring whenever my feet touched them, and I began to make out nightmarish figures attempting to claw their way out of the mess. 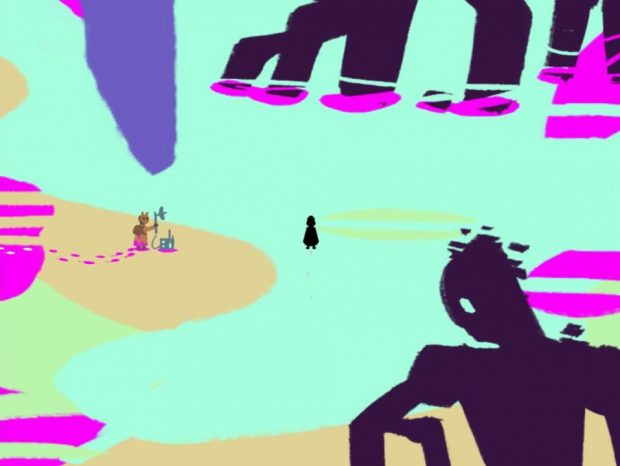 I stumbled into a broken industrial town, populated by ghosts and apparently under siege from cloud-like serpents. A sign in the ground warned me to beware of ghosts, while another one placed nearby told me to be kind to them. This is a world full of such juxtapositions: one person might be holding a sci-fi gizmo in one hand, while an old fashioned tee-pee and campfire sit just metres away. Those screaming figures paint a picture of anguish, calamity and terror, while that giant turtle from the header image swims merrily on his way, top hat and all.

There is a goal of sorts, if you choose to pursue it. Glowing statues can be found across the landscape, which call you towards them with an ethereal humming noise. Those statues talk to you: one might make a cryptic statement about the pursuit of light, while another will ask you to say hi to its neighbour.

I tried to stop playing so I can write this post multiple times, only to be tempted on by the next thing. I couldn't resist following a path to the temple of the door snakes, or exploring a town built on top of... actually, I've already described too much. I'll just say that whenever you like, you can press escape to pitch your tent, settle down and end the game. The final screen (or at least the one I got) is a map that shows you how the world fits together, and reveals all the places that you might have missed. There are mysteries both broad and small that I'm yet to unravel, and you can bet I'll be returning to them this evening.

One more thing: on Miles's Tumblr, I found someone asking him if he had any tips on how to create a world as colourful and intriguing as Storyseeker's. Here's his advice, which is both useful in its own right and a cool insight into how the game got made:

"The best trick is to keep asking questions. Most of the worldbuilding in Storyseeker came from increasingly complex explanations for a single drawing. Like, cool, here’s an oasis that looks like a giant footprint. But what made that footprint? Maybe a giant living statue. Where did it come from? Who built it? Where did they go and why did they fall? What if someone built a town on top of the body? Why there? Etc, ad infinitum.

"Also, logistics questions. Where do the weasel priests get the dye for their crimson robes? What material might a folk living in lavender grasslands make their roofs from? What do people eat in different parts of the world?"

Storyseeker is free on Itch.io.

Ta to Paolo Pedercini for pointing this out.