The Division 2 is as finely detailed as Clancyromps get. Hot steam pipes up from street grates. Footprints appear in the dust as you explore derelict office blocks. The Washington DC of this apocalypse shooter is littered with waist-high cover, sure. But it is also littered with actual litter. Uncountable piles of bin bags and trash piled up in the street, next to the body bags. You can almost smell the rot of this fallen city. But then, something emerges from the miasma in the street. Another bandit with a machete? No, it’s a deer. Because The Divison 2 is also teeming with wildlife. Crows, deer, raccoons, foxes. It’s basically a gritty reboot of The Animals of Farthing Wood. My review is still in progress, so for now, here are some of my new favourite friends. 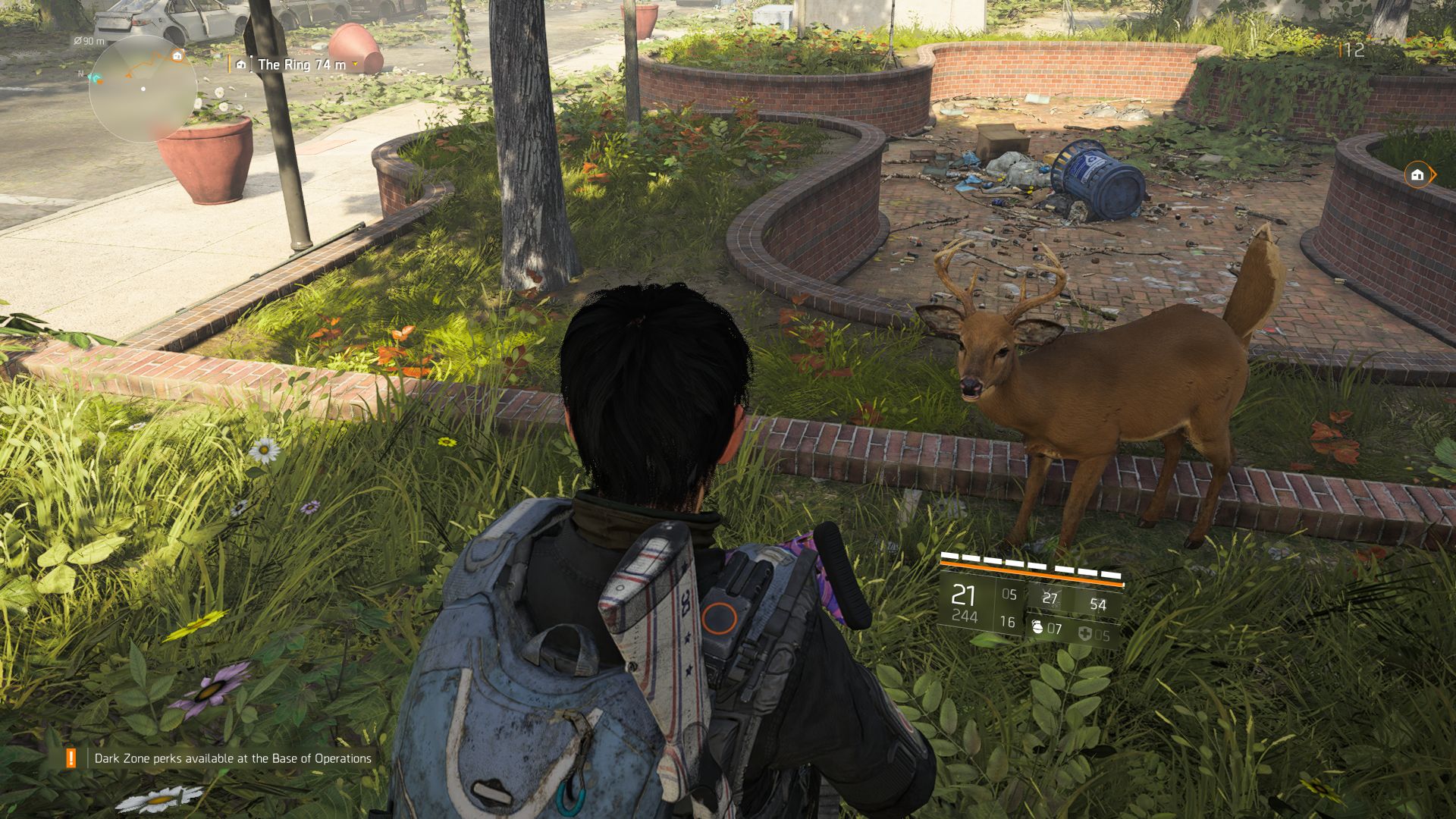 Probably the most numerous animal apart from crows. Deer have a habit of dramatically bounding out of the fog. They will usually flee when you startle them with your feverish craze for loot. But sometimes they glitch and let you stand really close. Their guttural breathing is heavy and unsettling. 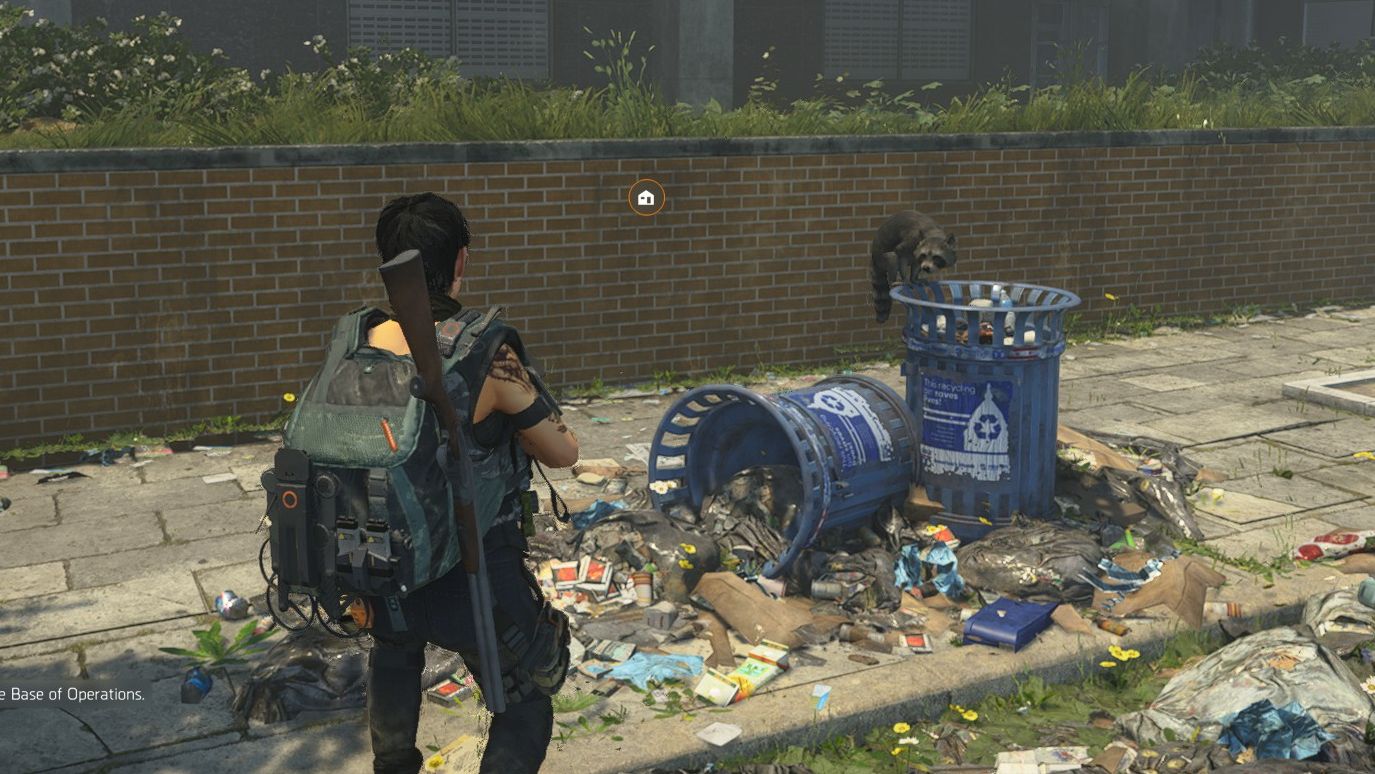 Just the best. The raccoons in DC can sometimes be found atop the city’s litter bins. This is despite the entire city constituting one large landfill. But you soon see why. Get closer and they will dive into the bin headfirst to escape you. Sometimes you find raccoons scrabbling for munchies in the street, and they scuttle under the nearest car to get away. 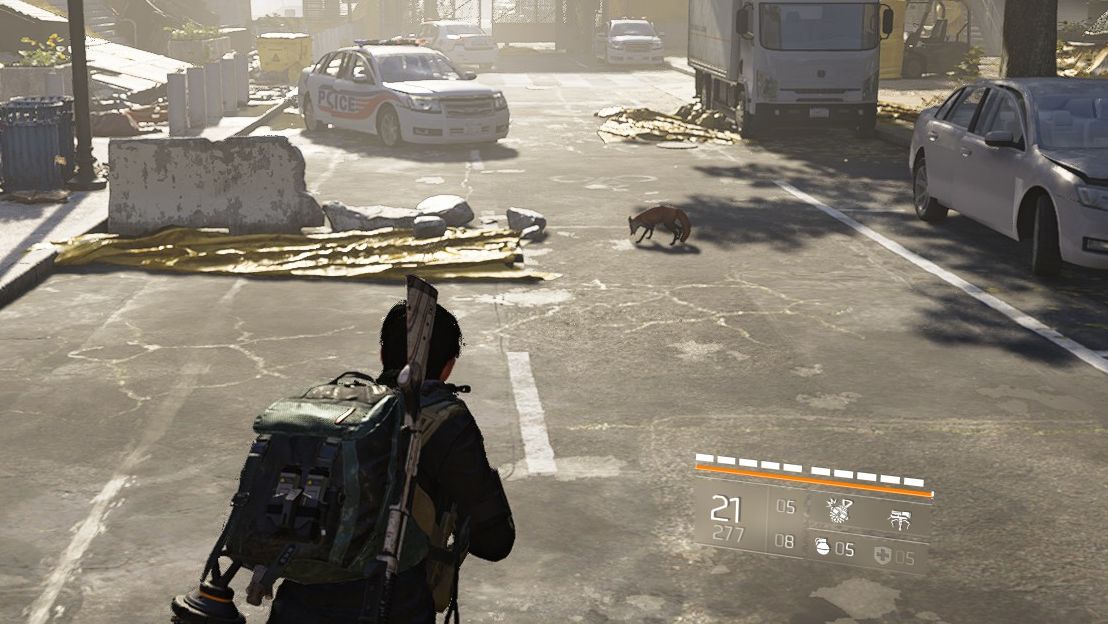 Foxes also duck under cars to escape the player. But slyly. 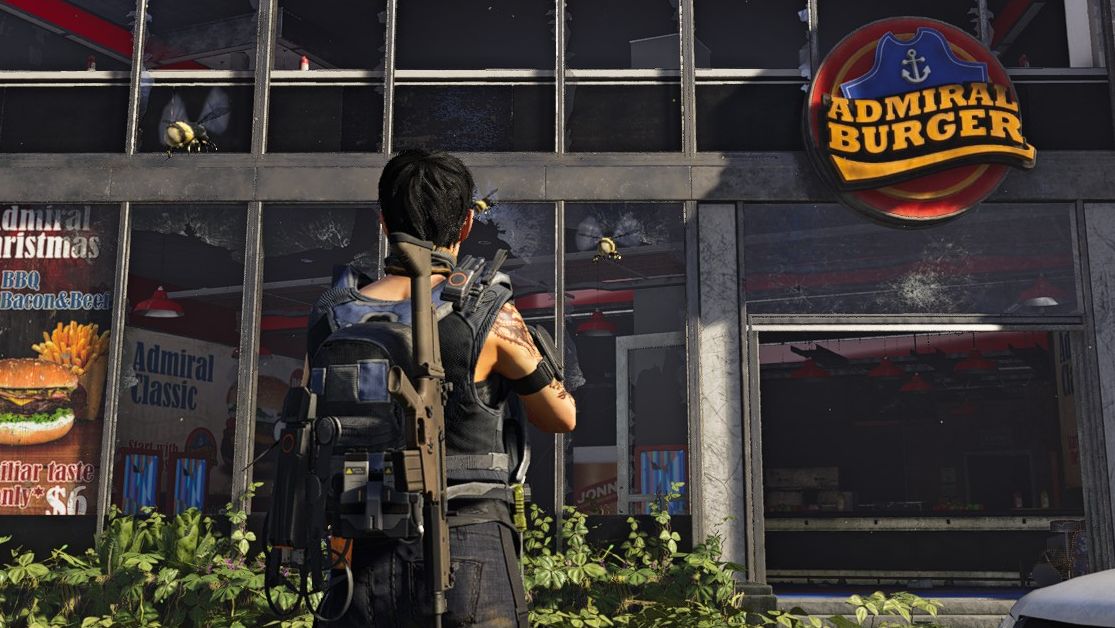 These bees buzzed after me when I got close to a bunch of flowers they were slurping on outside this delicious, uh, "Admiral Burger".. They didn’t sting, but they sometimes appeared very large on the game’s camera. It is life-affirming to see that this honourable insect is still alive in the hell capital, but also terrifying to suddenly have a giant bee in your eye. 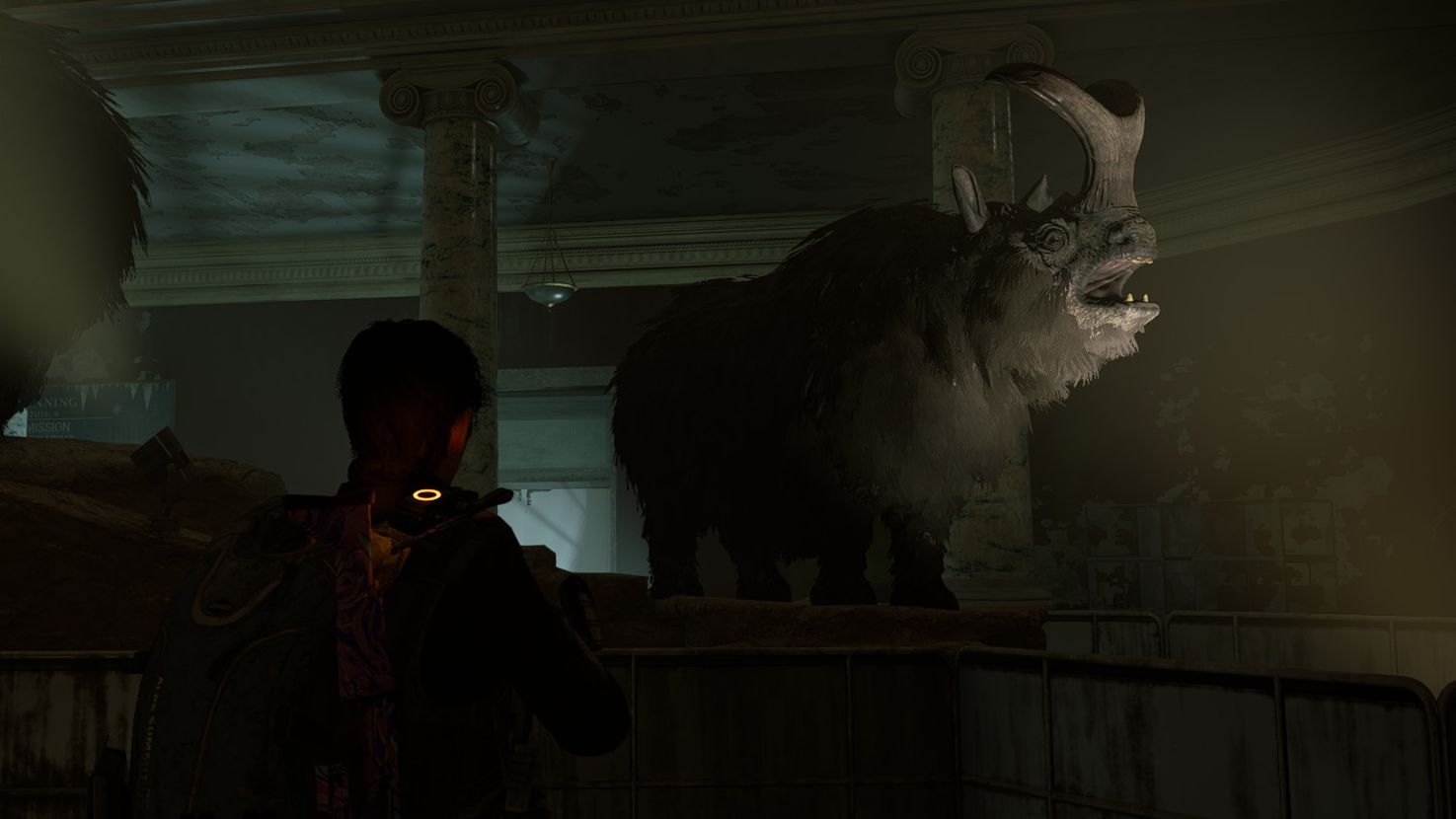 I found this guy in a museum. He’s dead now, but that’s OK. 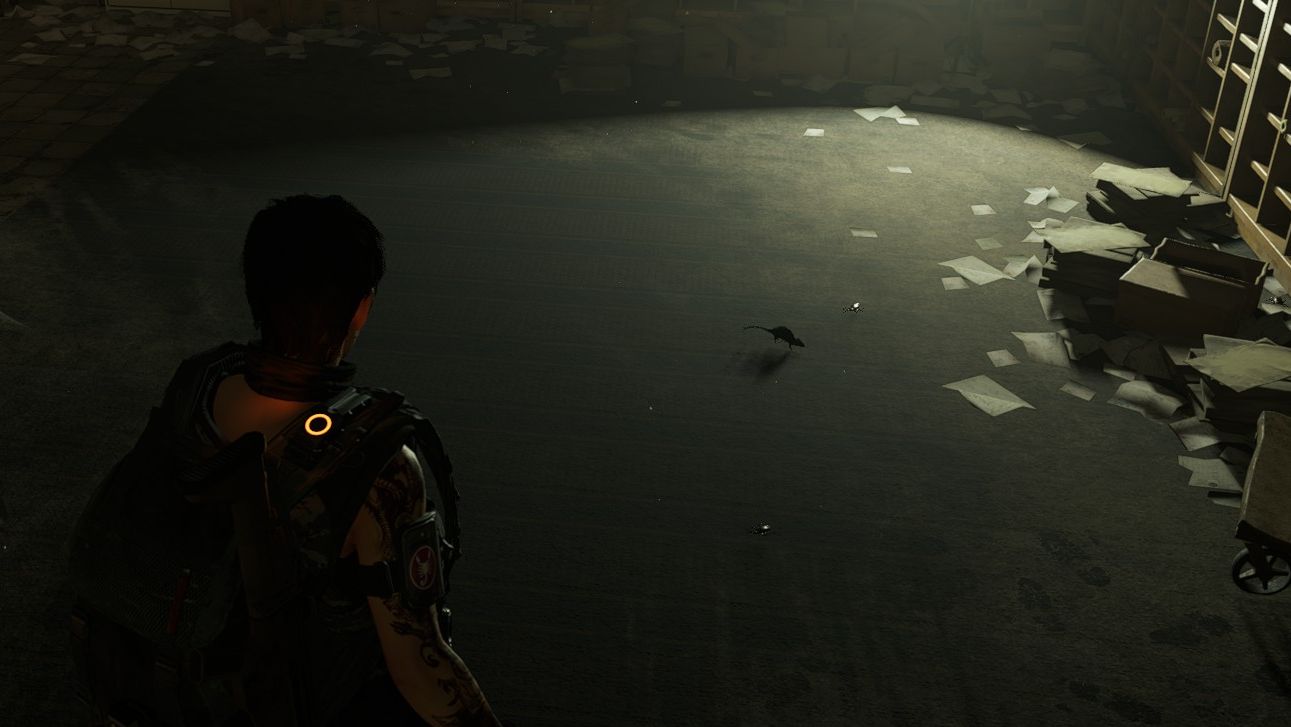 In the safehouses of DC, you can sometimes find mice scurrying across the floor. See, right there, next to the cockroaches. Ah, the beauty of nature. 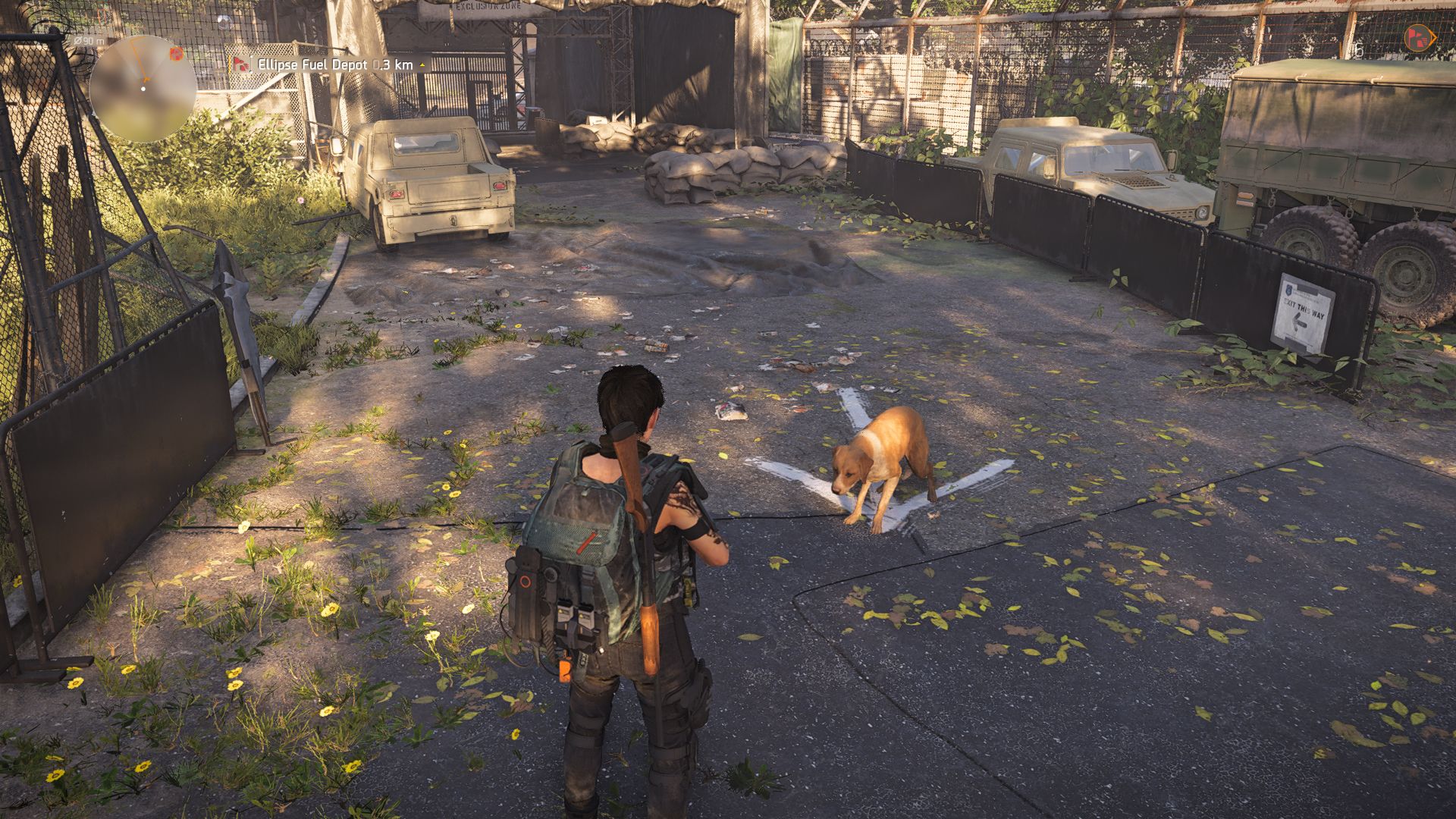 I could do an entire post on the good boys of this fetid city. It is remarkable that, in the depths of such apocalyptic inhumanity, these dogs still behave like your favourite Labrador. They run about chasing unknown things. They bark at unseen creatures in trees. Sometimes they show up in the middle of a firefight, looking sheepish, as if they’ve done a poo in the kitchen again. 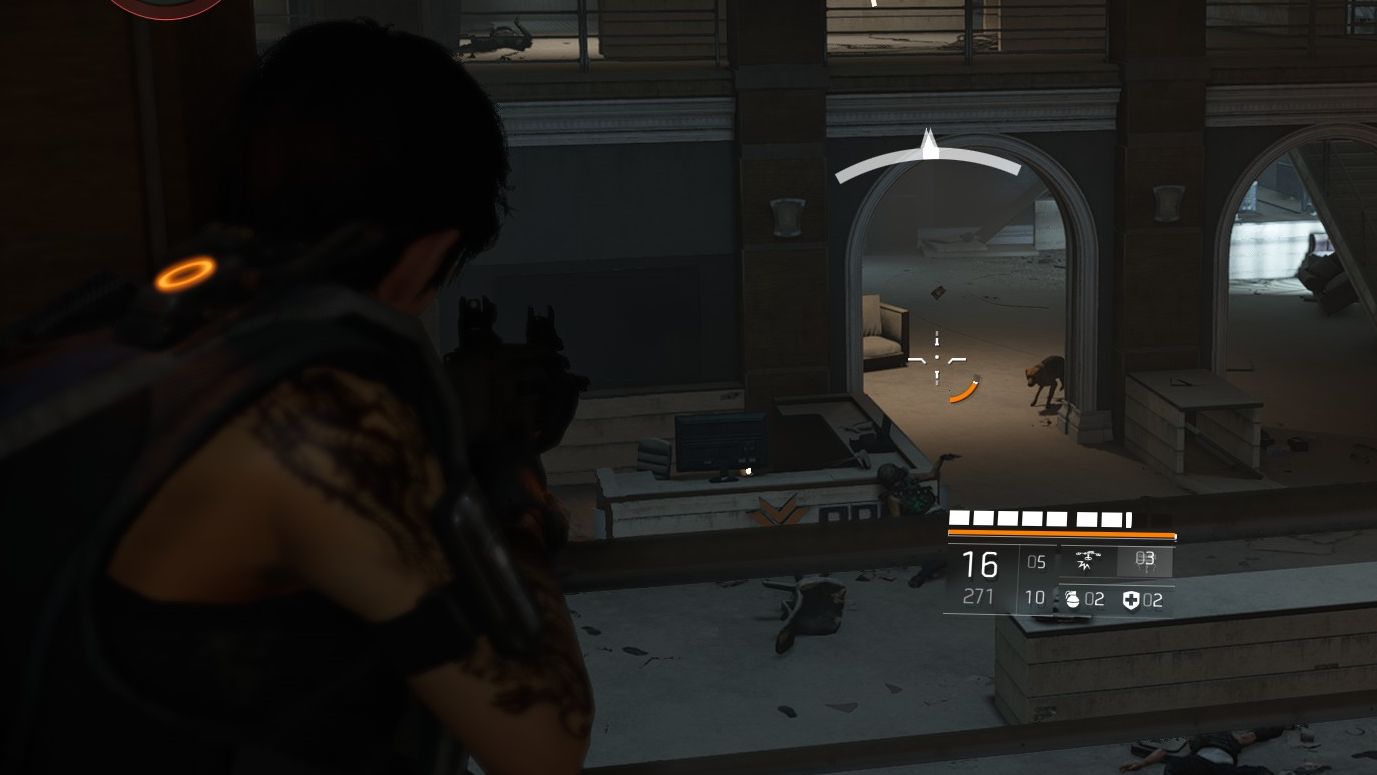 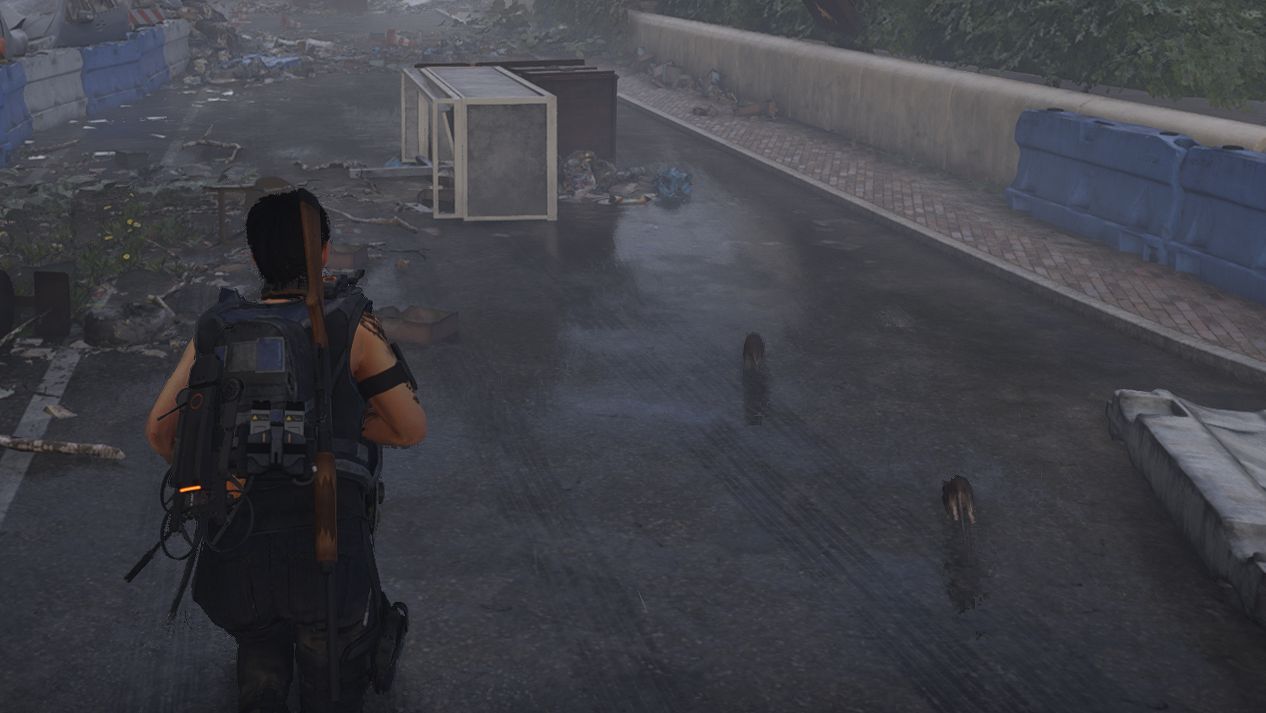 Do not judge the blessed rat. Rats are intelligent problem solvers and good friends. 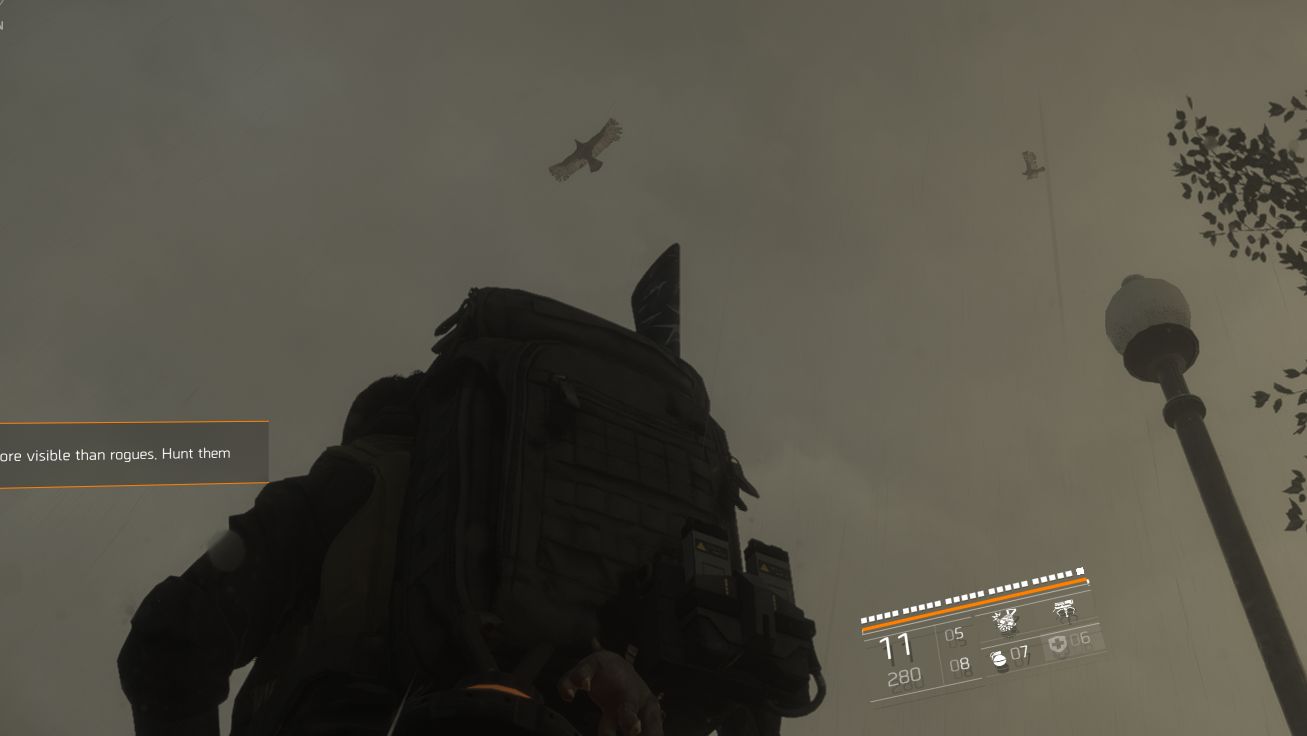 Vultures are found in the Dark Zone, hereby referred to as the Vulture Zone. They nibble on corpses, or perch on military jeeps, then flap languidly away whenever you interrupt their sordid thoughts. I watched one circling in the sky and other vultures came to meet them, probably to discuss clandestine acts against the state.

Anyway, yes. All excellent beasties. It’s sad that the only way you can interact with these animals is to e.g. shoot them (sorry, you cannot pet the dog). But the amount of work that has gone into filling the city with wildlife is characteristic of the attention to detail in this shootiest of shooters. It isn't limited to the animal kingdom. There are civilians collecting water, and enemy soldiers bickering over who can do the most push-ups. But the galloping deer and yelping hounds stand out the most. Along with all the overgrowing vines in the street, the suggestion is that old ma Earth is taking back her planet, but I’ve found that’s less of a coherent theme and more of an excuse to make the city look like a cool jungle to shoot bullets in. Nature isn’t exactly getting its revenge in The Division 2. But it is having a good time eating trash and watching mankind fall to pieces.