I don't keep in touch with loads of the people I was at school with, but one of them I do is a man we'll call Tim (because that's his name). Tim is very nice and I value his friendship, but he is also a useful yardstick for how long ago school was, and how I should be feeling about life. At school he held weird LAN parties in his parents' garage, had a load of Airsoft guns, and dressed as a robot on more than one occasion. Now he is married, moved to a different country, and is responsible for the well-being of a small child and at least one dog. Which is why it alarmed me when the Bugsnax trailer sparked some kind of of strange crisis for him, at about midnight last night.

If you have not seen, Bugsnax was revealed during Sony's PS5 steam last night, but it's also coming to PC via the Epic Games Store. It is by the developers of Octodad and is set on an island populated by animals made of sentient food - a crab of apple segments, rack-of-rib centipedes, and so on. When you eat one, your limbs will take on the properties of that food. In the trailer a friendly walrus gets a strawberry arm.

There end the facts I have a firm grasp of, and I was happy to wait a bit to learn more. But for Tim, understanding Bugsnax is a more pressing concern. At 12:08am his time, he sent me a voice memo that was just a clip from the trailer music: oh-ooh-oh talkin'boutBugsnax! Then, two minutes later, "If RPS isn't wall-to-wall Bugsnax coverage tomorrow I don't know what I'll do."

Then he sent me a screenshot from the trailer, showing some kind of food monster lunging at the screen. 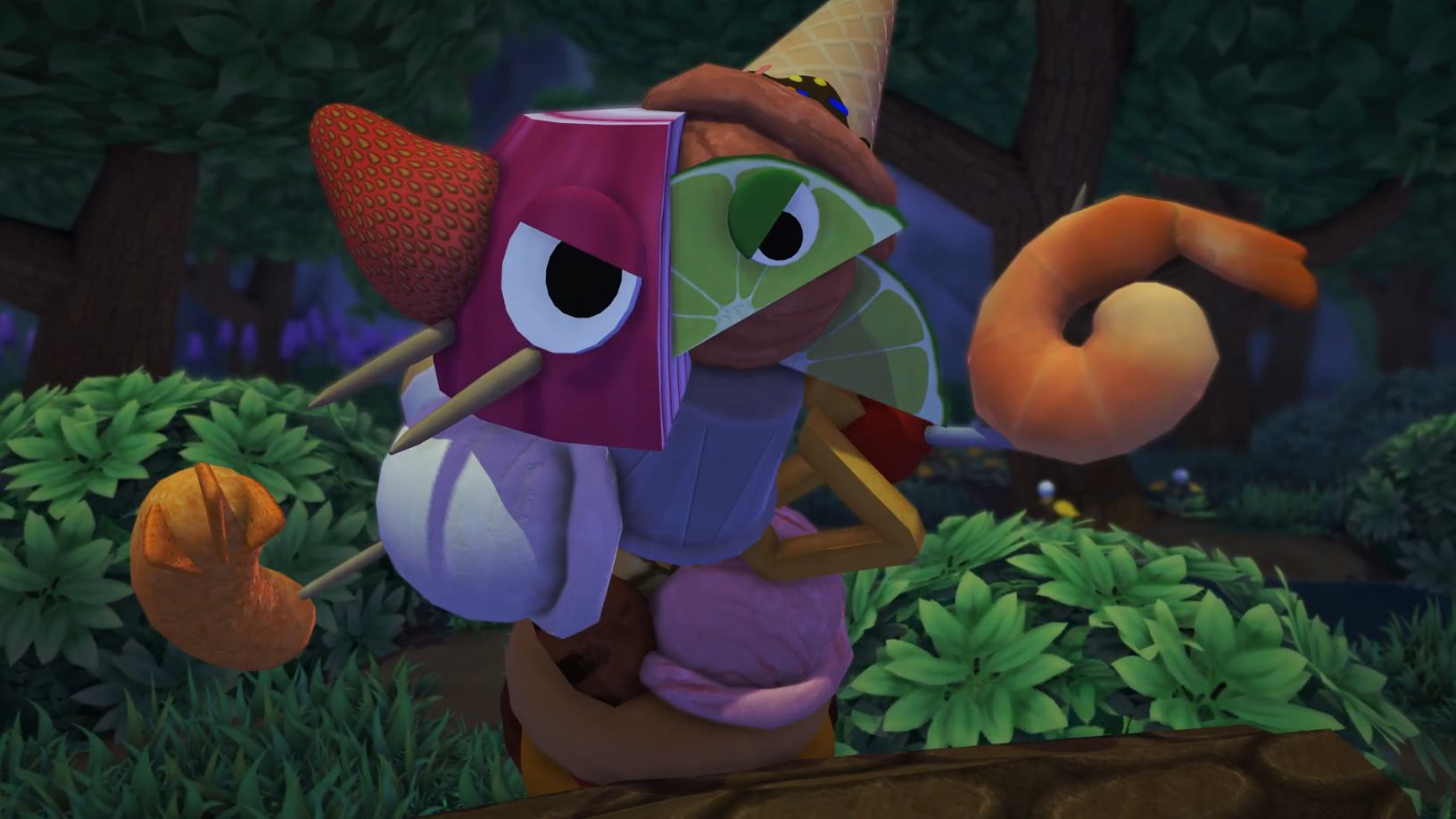 "Who is this character and what does he want."
"He is clearly the bad guy."
"I need answers."

We discussed possible motivations - perhaps his pain is from the duality of being both bug and snack; perhaps the native species' have formed some sort of Megazord to fight off the colonising player character, who is clearly mammalian (see: fur) and therefore of neither bug or snack extraction. It was and is clearly still troubling Tim, and I don't know why, but because he is one of the ways in which I measure progress into adulthood I worry we all need to be more concerned about Bugsnax.

And in fairness, once you start questioning it, a lot of things come up. There is clearly more to know about Bugsnax, a species capable of instantly altering DNA. Where did the Bugsnax come from? How will their ability to change limbs translate into the mechanics of the game? Puzzles? Platforming? Combat? The last one feels unlikely, and yet...? And is this all legally distinct enough from Cloudy With A Chance Of Meatballs 2?

Only time will tell. But that may not be soon enough for Tim.

"The song says 'talking about Bugsnax," he said, in what I imagined to be a hoarse whisper. "But all they do is say Bugsnax."
"But you know."
"Now I'm talking bout Bugsnax."