This is The Mechanic, where Alex Wiltshire invites developers to discuss the difficult journeys they underwent to make the best bits of their games. This time, Dead Cells [official site].

When Dead Cells was first released in Steam Early Access in May this year, Sébastien Bénard was shocked to see how people played the game he’d spent the previous three years designing. “It was quickly a disappointment,” he tells me. They were not playing in the way he’d intended at all. They weren’t using the weapons in the game elegantly, shooting with the bow before finishing with a blade, or blocking with the shield and following up with the dagger. They were only using bows, killing everything, even bosses, from a safe range. They never put themselves in danger and they never made different decisions. They were playing Dead Cells efficiently, and completely wrong.

Dead Cells has passed through many forms to get to what it is today. Now a wonderfully fast and fluid Castlevania-inflected action dungeon-crawler, it was once a tower defence game. But few of its essential systems have seen as many changes as its character builds, which allow your character to play differently each time you take a run through the game. Their design has taken its developer, Motion Twin, on a long journey, and when Bénard watched those players at release, he realised it still had a long way to go.

“It was a big disappointment because it wasn’t something I was thinking,” Bénard says. “But I wasn’t thinking as a player but more like a designer. It’s difficult to get rid of the idea of the way we want it to be played, and the efficient way is usually the opposite,” he says. 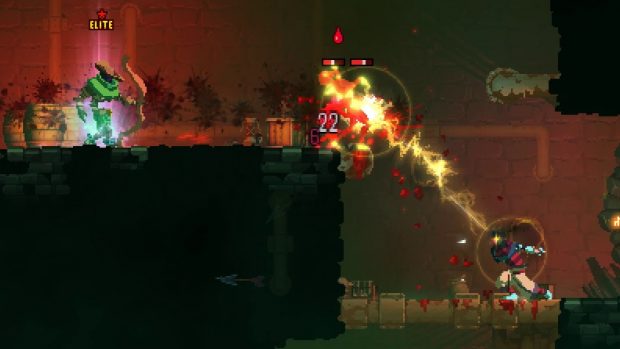 That journey still isn’t over. Tweaking it and watching it being played over the past five months has led the team to work on its most drastic change yet. But the best way to understand what Dead Cells is today is to understand its roots, and a decision they made around a year and a half ago, when Dead Cells morphed into the roguelike Castlevania form it takes today. That was the point a fundamental rule was set that still underpins every element of the game: every weapon and item should change the way you play.

Motion Twin had already given up on two different systems for governing player builds. The first they considered was the classic: a skill tree. Players would have to invest in the first tiers of skills before they could access the later ones. But they rejected it because of the skill tree’s limiting contradiction: you need to know the whole tree before you can make meaningful choices about which skill you choose first.

They next thought about an inventory. RPGs have them, so why not? You can choose the weapons you want for a situation, so it’s flexible and choice-filled. But they found it completely broke the rhythm of the game, because players spent lots of time in it to swap weapons around. So they ditched the inventory in favour of having the player equip just two weapons. Very quickly they realised the value in the choices posed by having to leave a weapon behind when you find a new one, and the idea stuck. Dead Cells’ builds became defined through two equipped weapons and two equipped active skills, which comprised items such as grenades, and each was mapped to a button so it was instantly available. 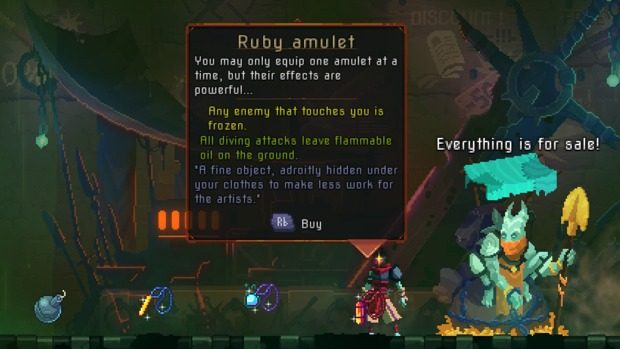 To seal the concept, the weapons themselves would be strongly differentiated from each other. Bénard eschewing minor stat bonuses in favour of big ideas: the twin daggers inflict a critical hit on the third consecutive strike; the ice bow freezes enemies it hits; the spiteful sword lands criticals if you’ve been hit recently. Designing them was a matter of identifying and filling roles in the game so they were good in certain situations and bad in others. The spiteful sword, for instance, was originally intended as new players’ starting weapon, because it’d give them an opportunity to benefit from being hit (like Bloodborne, you get a short window after being hit in which damage you deal recoups your own health). And then they created combinations of two weapons that complemented each other. If a weapon or item could deal bleeding, a good partner would be one that gained a bonus from hitting bleeding targets.

The strength of this system has helped reinforce Dead Cells’ nature as short-session roguelike in which runs take 30-45-minutes. During that time a player has to learn how to play and master a build which is likely to be quite different to their last. “That was the idea, making sure you have new experiences each time, or at least as new as possible, but not too many things to learn in each session,” says Bénard, though he admits that even just four weapons can be a little too many for a lot of players. 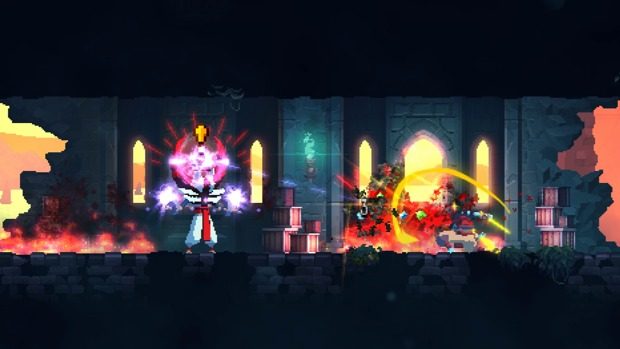 The sticky issue, however, was that Dead Cells’ weapons were extremely fun to play with. It’s very easy to fall in love with, say, the twin blades and throwing knife during a run and not to want to try anything else. This problem caused a big debate at Motion Twin around a year ago. Should players be encouraged to experiment with alternative builds so they’d explore the full roster? Some members of the studio felt that they should go as far as forcing them to change their weapons frequently. Or, should they double down on the bonds players formed with their weapons and the playstyle they’d developed? In that case, should they be able upgrade a weapon so they could use it throughout a run?

“We decided between these two extremes and went for something in between,” says Bénard. Dead Cells lightly raises the stats on weapons through the game so they’re more powerful by the end, making them viable throughout. You’re also not forced to use certain weapons. For a while during development, one slot only equipped shields and bows, and the other only melee. But that was dumped so you can go bow-crazy if you want. Instead of forcing you, Bénard hopes curiosity for how they play will pull you to try new things instead.

The discussion at Motion Twin that led to this decision could get heated. Bénard had to convince several members of the studio that forcing players to change their weapons was a bad idea. “I did a prototype that forced players to change their weapons and played it for an hour, and I was like, ‘OK, no, it’s not good. It doesn’t feel right.’” When his pro-change colleagues tried it, they had to agree. “Usually my most important job is not to decide, it’s more to rationalise or transform ideas and feelings into actual rules in the game,” he says. 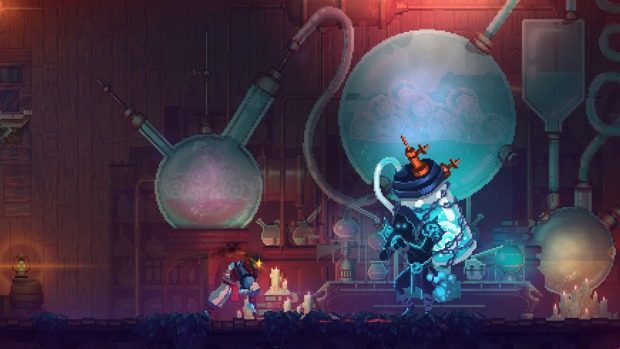 And so Dead Cells was released, and Bénard watched his bows lay waste to swathes of careful design. “It was a problem because of course, when you make a game you want it to be a challenge, and when a player goes for long-range weapons the challenge should still be there. It shouldn’t be just pressing a button and it kills the enemy.”

The problem was in one of the philosophies they’d set early on, which was not to limit players with stocks of ammunition for things like grenades and bows. But here it was making bows overpowered. The solution was to give them a stock of ammunition which would stick in the enemy until they died, whereupon they’d be returned. The aim was that they’d only do so much to bosses but still shred weak enemies. But the fix went a little too far, requiring yet another redesign which went live around a month ago which returned arrows from surviving enemies after a few seconds to make them a little more effective against bosses. Finally, the issue was fixed. “Players were pretty happy with it and it forced them to adopt new strategies,” Bénard tells me. “They could still use dual bow builds, but they had to think about it. It’s not just the easy way to play. You have to go for a specific build to ensure you’re never out of ammo. We wanted the player to think and not to have an easy way to play.” 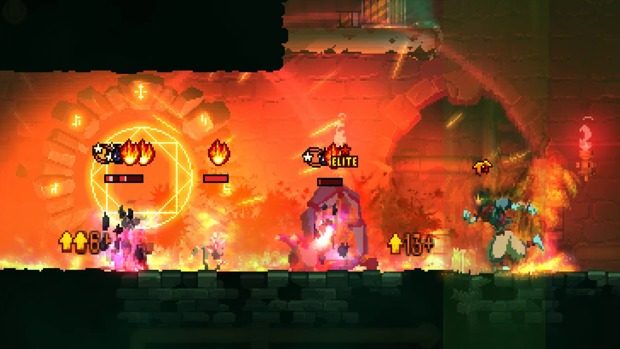 But there’s a more important problem in Dead Cells, one that’s about to cause the biggest shakeup in its build design yet. Any experienced player will tell you that when they find a Scroll of Power, which allows them to level up either their health (increasing HP), skills (reducing item cooldowns) or strength (increasing damage), they almost always go for damage. 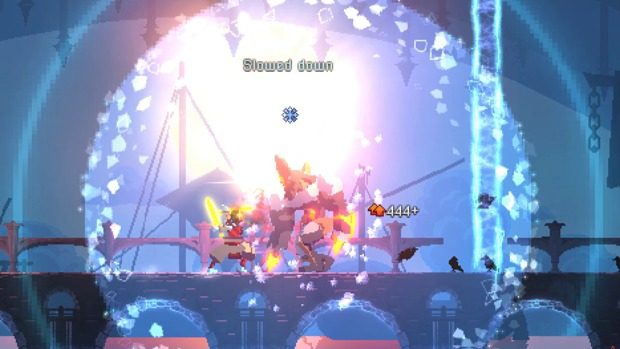 He realised that the real problem was in the scrolls forcing the player to choose, and two days before we talked, he outlined his plan to fix it to the team. The new system ditches health, strength and skill upgrades, and brings in a new system in which each weapon and item is assigned to one of three categories: brutality (focusing on slow and powerful melee weapons), finesse (fast weapons like rapiers) and survival (shields and crowd-control). When you find a scroll, you’ll choose for it to power up one of these categories, raising the effectiveness of any equipment of its type that you have.

“We know that most players at first will try to go for full finesse and nothing else, but the thing is, it’s difficult to get four finesse weapon drops because it depends on what drops,” Bénard explains. The best builds will be a combination of two categories, such as brutality and finesse: a stunning blow from The Nutcracker and a stab to the heart from a rapier.

It’s almost inevitable that more tweaks are to come, but the journey Dead Cells has taken to get to here is a fascinating example of what it takes to build a system that focuses your player’s mind on the important choices. What weapons do you want? And for there never to be only one answer.

Dead Cells is available in early access now via Steam and Humble.