Warhammer: Vermintide 2 was perhaps too hard a game at launch. While certainly thrilling to behold, the number of new parties crushed mercilessly by Bile Trolls was nigh-incomprehensible, and I've seen far too many missions go south in just a few seconds. Several patches to Fatshark's co-op hack n' slasher have improved player survivability, but today's Patch 1.0.5 might be the biggest collection of buffs yet.

While the full patch notes would be far too long to post verbatim here, the long and short of it is buffs for everyone. Power levels are no longer capped on the upper two difficulty levels, and excessively powerful players are only slightly scaled down on lower difficulties now. An enormous number of skills for all five characters have been improved, especially Bardin's Slayer class and Kruber's Huntsman role getting improvements to almost all their traits. 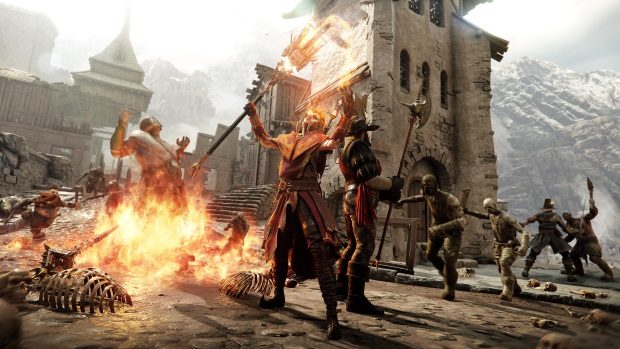 Enemies have been softened up a little. Those brave enough to play on the higher difficulty settings will find the director less willing to drop extra swarms on top of existing encounters, and several specific foes have been weakened. Marauders are now easier to cut through with cleaving attacks, Sorcerors are now vulnerable to headshots and Blightstormers in particular (bane of so many starting groups) have lost a third of their health and some armor to boot.

One of the few things that isn't a direct boon for players is the tweaks they've made to the Twitch-integrated streaming mode of the game. While most of the blessings have been improved, the chat-spawned mobs of enemies have also been scaled up. Do you think you're ready to deal with a pack of four Rattling Gunners simultaneously? You're a braver person than I. Those bullets hurt.

All in all, these tweaks should lead to a somewhat less lethal game, especially on the higher difficulties. Not that I've gotten much beyond the first few levels, after bouncing off during the Great Troll Newbie Stompening at launch. Perhaps now would be a good time to return to the fray, although I hope there's enough new blood still present to mitigate for my pitifully low power level.