After finding a very important person in Assassin's Creed Odyssey, you are told of a place you need to visit. Tucked away and hidden from plain sight, there's one other big thing that is just waiting to be discovered: Atlantis. Yes, that Atlantis. You can actually explore the fabled lost city and it is quite a striking place full of technology from the ancient civilisation. Accessing it is only the beginning though, as this part of your odyssey will ask you to defeat legendary monsters of Greek mythology. 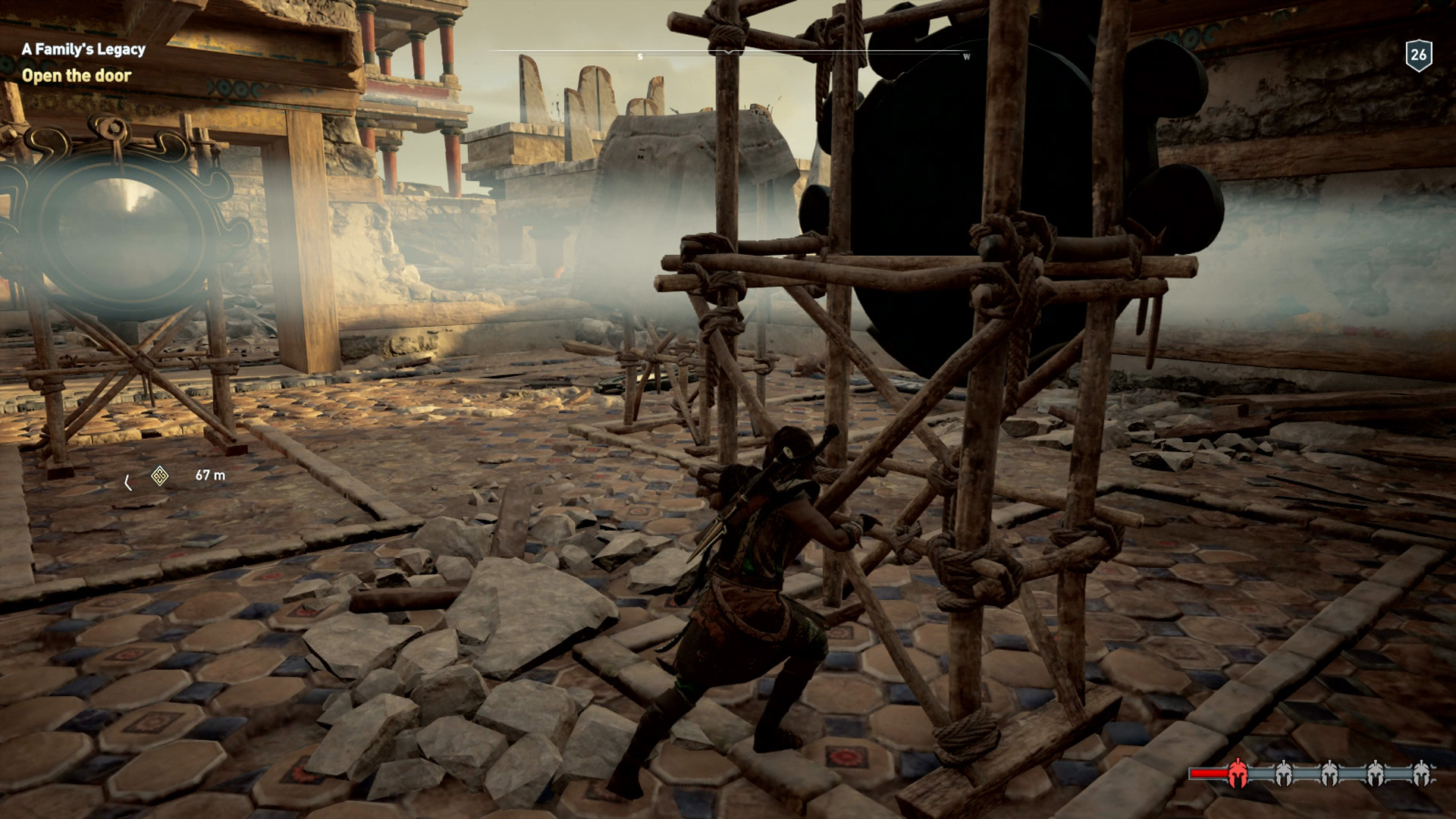 Your first job is to gain access to the lost city. Head to the Caldera of Fate in the south east islands of the map. Use Ikaros to locate the camp, where a small chest is. You'll discover some information about your father, but that's about it. Head to the big door to find it locked. You'll need to open it using sunlight and mirrors. From the door, climb the wall on its right as you're looking at it and run up the hill to see a beam of light coming from a mirror. Follow the light until you have found a small barricade covering the mirror, and two lions. Defeat them and smash the barricade to make the light continue onward.

Follow the light again and smash the barricade. Zip down the wire and you'll come across a room with movable objects. Pull the rag covered pedestal out of the way. Then pull the pedestal with the mirror closest to the beam of light away from it all the way, and push the other mirror all the way forward. Your character will say if it's in the right position. Follow the beam again to another building and climb up it. Push the mirror fully back, then the block of wooden bits to the right. Push the rags forward, then the barricade across it. Finally pull the wooden bits you haven't moved backwards and the rags back to their original position and your character will comment that they've "got it." Drop down the hole and punch the final barricade, being careful of the snakes in this room to finally unlock the door.

After this it's just a short platforming section to get to Atlantis. Be careful of the lava though as that will instantly kill you. You'll meet a man at the end who will explain the deal with this location. There is also a short modern section after this, but once done you'll be asked to retrieve the artefacts of power that need to be sealed away from humanity. Most involve fighting things, so we'll begin with the only artefact that doesn't require introducing a monster to your blade.

After completing finding of Atlantis, you'll be able to start "The Lore of the Sphinx". Head to the far north of Boeotia, just before the mountains north of the Scorched Rolling Plains, literally on the border. You'll find some ruins and a man standing there called Gorgias. Talk to him and accept his request to find his apprentice. Do so and follow the quest line until you have the quest "Awaken the Myth". This will ask you to head back to the ruins you spoke to Gorgias at. Place the medallion on the pedestal and the Sphinx will awaken.

Once you have answered the Sphinx's three questions, you should press the icons in the order of the answers you gave. This will cause a bolt of lightning to strike the Sphinx, killing it on the spot. Recover your prize from its corpse to net your first artefact.

How to kill the Cyclops

Before you ask, yes you already killed a "cyclops", but it's not the real deal. The first artefact you need to gather comes at the end of a quest line beginning with the quest "A God Among Men" which can be found on Kythera Island on Pilgrim Hill. You'll need to finish it, then "Left to Dye", before taking on the quest "Stairway to Olympos".

As part of the Stairway to Olympos quest, you'll need to head to the Isle of Thisvi. This can be reached as soon as you reach Phokis, to which a fast travel point will be placed, but you won't be able to access the inner chambers until you're doing this quest. Head into the temple and swim through the pool that opens underneath you. You'll find Empedokles standing in front of a door. Once the raving lunatic has been appropriately squished to a pulp, you'll fight the cyclops.

The first phase would have you dodging his stomps and charges. Perhaps his most powerful attack is to grab you, since he slams you multiple times into the ground. Even at higher levels, the cyclops has a lot of health, so you need to be persistent in keeping close to his feet and to his side. Halfway through the battle, he'll rip off a piece of the scenery to use as a club. Each ground smash with his club will cause the ceiling to cave in slightly, so dodging everything is vital to not take a ton of damage. Generally speaking, dodging is better than parrying in this battle, since this big boy has a lot of durability.

Rather famously, the fact that the cyclops only has one eye means that an arrow is a good idea, since it stuns him for a short time. Use this advantage towards the end of the battle so you can deal those final blows with relative ease. Keep being persistent in your attacks, and keep dodging; eventually it will topple over. Rip out its eye for the first artefact.

How to slay the Minotaur

Minos's Legacy in Messara is the location of the next artefact, with the quest line beginning with "Myths and Minotaurs", then proceeded with "Of Minotaurs and Men" and finally "He Waits". When you eventually get to "He Waits", you'll be asked to open the labyrinth's door. Head into the building and drop down to the bottom deep underground.

This will lead to the Labyrinth of Lost Souls. Interact with the pedestal to open the pit below. Dive through and open the door and jump to the ground. You'll notice a golden thread in the form of a trail. Follow it to lead you to a ring. Pick it up and explore the rest of the maze until you find some rocks leading to a door, leading to the Minotaur.

This very angry bi-pedal bull has a lot of hard-hitting attacks. It can swing its axe at you which is relatively simple to dodge, but its ground pound causes tremors that knock everything over, including you. Around halfway through the battle, the Minotaur gets even angrier, so its attacks have a lot more ferocity.

Don't ever go too far from the Minotaur as it will charge very quickly at you. This is its most devastating attack, so should it ever scrape its hooves on the ground, get ready to dive sideways. Be patient with your attacks and try to hit it as hard as you can to defeat it. Rip off its horn for the second artefact.

How to kill Medusa

Head to the island of Lesbos, specifically to the Petrified Valley to begin this quest line, which includes "Romancing the Stone Garden", "Love's Long Shadow", "Hard to Artemis", "Heavy is the Spear", "Key to Happiness?" and "Writhing Dead". In this final quest, you'll need to track Bryce through the temple. Follow through to find the Medusa.

This monster is the toughest enemy in the game at level 50. You won't stand a chance unless you are somewhat close to its level. It will initially summon a bunch of high-levelled allies, before proceeding to try and turn you into stone with lasers. She will be invulnerable in her sphere, so you'll need to kill the allies first. Hide behind the pillars and try to fight the four enemies she summoned. Once they are slain, equip the Sword of Damokles and approach Medusa.

Its attacks include a focused laser that turns you to stone, as well as mortar-like lasers that impact the ground with an area of effect. Dodge these and press the attack. It will teleport away, but be open to attack shortly thereafter. If it tries to turn you into stone, attack it to distract it, or hide behind a pillar. If you are ever turned into stone, just try to dodge repeatedly, especially if there are attacks coming your way.

After a third of its health is gone, it will teleport to the centre and summon four more allies. Defeat them and repeat the same strategy against Medusa herself. Once she's down to her last third, she will summon four more, but will be more aggressive with her mortar-like attacks. Kill them before turning your attention to killing Medusa and retrieving the snake as your final prize.

Unlocking the secrets of Atlantis

Head back to Atlantis and place the four artefacts into their respective pedestals. You'll then have a long scene where the Isos Aletheia speaks about humans. After which, you'll have another sequence where you must control Layla in the present. In order to fully complete this segment, you'll need to realign a part of the room. Climb up the wall you're facing when you have control and move the two mirrors into place to get the fourth beam of light to hit the pyramid. This will then complete this quest arc.