Greek mythology is full of tales of great feats by great heroes that were revered by both the Ancient Greeks, the Romans, and even remembered in more modern times. Their labours and the hunts of beasts by any of the Greek heroes were tests from Artemis - goddess of hunting, wild animals, and the wilderness. Assassin's Creed Odyssey gives you the opportunity to embark on your own great hunts in the Daughters of Artemis quest line, though some of these beasts can be especially tough. To help with the hunt, in this guide, we will take you through where to find the legendary beasts, and the strategies for how to kill them. 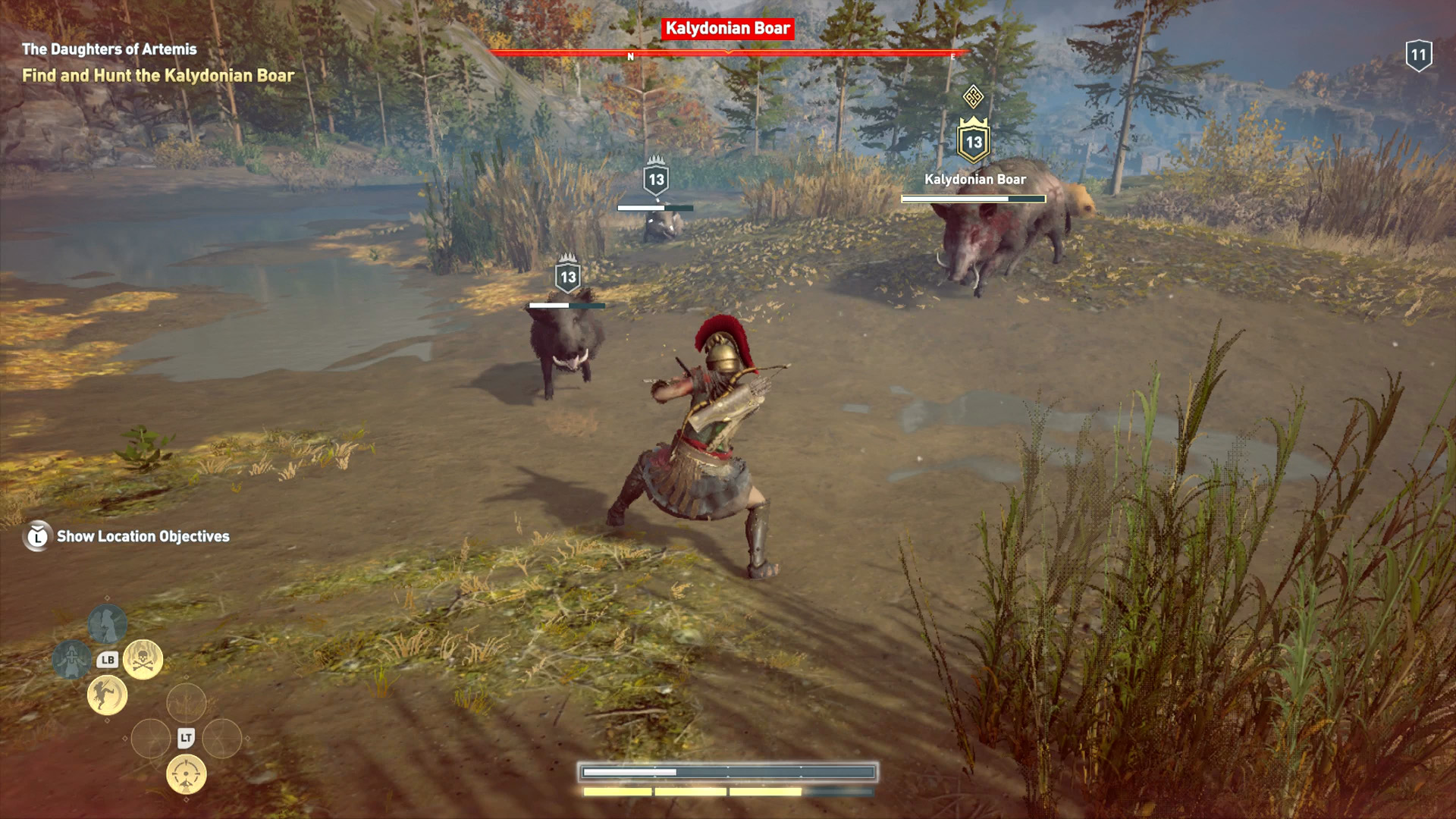 You'll find Daphnae from the daughters of Artemis in Phokis in the Sacred Lands of Apollo, near the Temple dedicated to the goddess herself. She'll be standing on a cliff edge. Later on in this side quest, she'll move to a new location. Head to Affluence Bay, towards the north-east of the Petrified Islands, to find Daphnae standing next to a camp fire.

After some tense introductions, she'll ask you to kill the Kalydonian boar that roams the northern part of the Sacred Lands of Apollo, west of your location. It's somewhere in the north-western part of the region near the mountains. You'll see a swamp with a cave nearby that is the home of your target. This "big pig" is no laughing matter. Its attacks are powerful but somewhat easy to dodge, as long as you're flanking its side and stabbing it with your weapons. If you have a lot of ability points sunk into imbuing your weapons with fire, then make sure you have that equipped.

After a short time into the battle, the Kalydonian boar will roar. Every time it does this, four more boar will charge simultaneously at you from off screen, so keep and eye out for any indication of this. The Kalydonian boar will take a bit of a back-seat unless you get too close, while its smaller brethren take up the mantle. While it does this, it will heal damage, so try to get at least a few hits in with ranged skills like the Predator Shot to distract it, while at the same time dodging at the last moment to slow down time. After the smaller ones are slain, the Kalydonian boar will become a bit more aggressive. Keep at it, killing any boars that come into the fray, and slay it to get its pelt. Return to Daphnae at the temple to get Artemis's Bow. 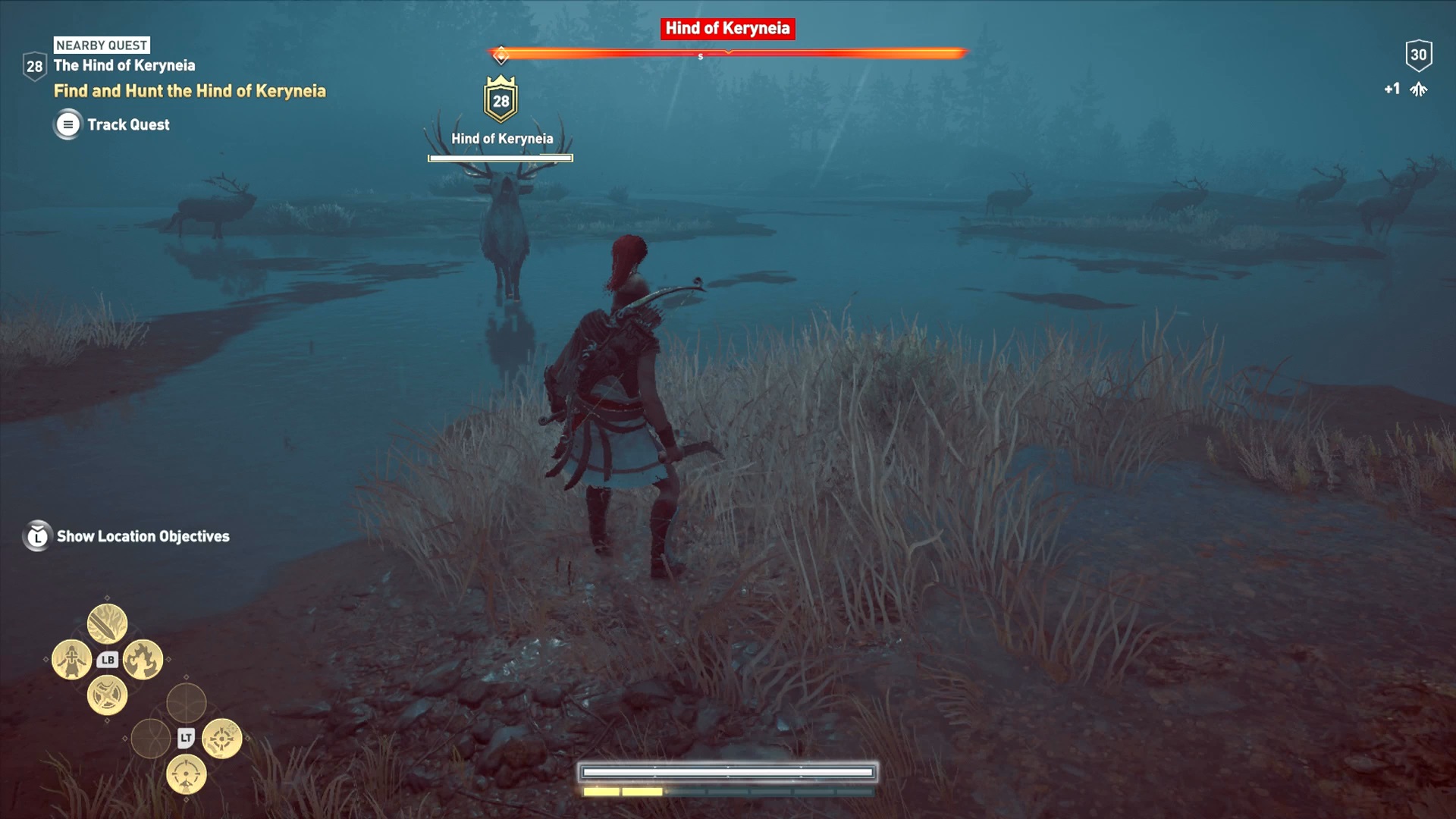 In the lake area of Artemision Point, towards the north-west of the Abantis Islands, you'll find the Hind of Keryneia. This massive deer is rather nimble and always tries to have its horns face you. It can drive its horns into the ground and raise them sharply to fling you into the air. Just keep to the side of this deer to avoid its horns, though it will readjust its position regularly.

While the Hind is remarkably nimble, it's also surprisingly fragile, so is easily defeated provided you bring all the best skills. Refer to our Assassin's Creed Odyssey skills guide for more on that. If you Bringing this deer's pelt back to Daphnae and talking to her some more will give you a few Death Arrows, but not another piece of Artemis's gear. 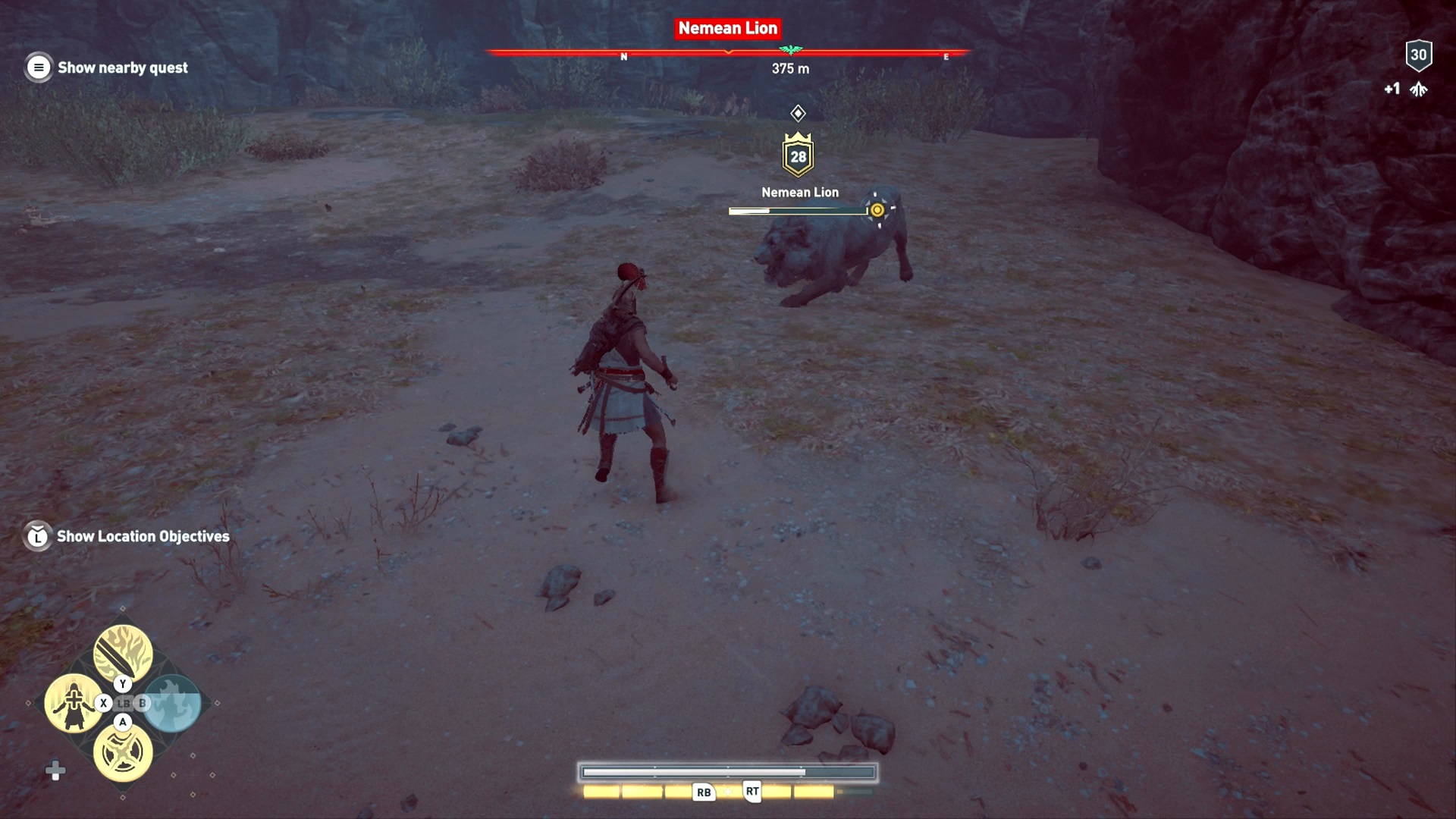 Ah, the most famous of all the beasts in Greek mythology. This ferocious predator can be found in Argolis, towards the Sinkholes of Herakles. The pale lion will be accompanied by the rest of its pack and is very quick. The same tried and tested methods of using fire-based weapons seem to work, though you will need to dodge all of its attacks as they are fast and unblockable.

There are other lions in the area, but you can isolate the Nemean Lion into a corner. It'll occasionally roar at you to stun you, but provided that there are no other lions nearby, this is barely a hazard. However, it also seems to have more health than the majority of the other larger animals you've been hunting, so be patient and it will eventually succumb to death. For winning, you'll get Pandora's Kopis for your troubles of slaying the lion.

Another piggy, but this one is in the western part of the Erymanthos Foothills, in the region of Elis. You'll find a ruined battlement of sorts, where the rain is poisonous. You'll therefore need to be quick in slaying this beast. Thankfully, this one doesn't summon little friends to make things more difficult than they need to be, but the terrain is the most damaging part of the fight. Since you can't lure it out, you'll need to win the war of attrition.

Other than that, it's like a bigger, but otherwise regular boar. Still, like the Kalydonian Boar, it roasts well to fire-based attacks, though there is no point in trying to poison it. Upon returning to Daphnae, you'll get Master's Artemis Gloves.

Located in Arkadia near the south-eastern part of the Golden Fields, this is just across from the river in the lower part of the foothills in the nearby forest. A clearing within is where your furry quarry will be. Kallisto is massive. I mean, really massive, meaning that its attacks pack a big punch.

The most common attack it has is a sort of pound where it rises on its hind legs before crashing down. This is easy to dodge, but make sure that its followup attack of a smaller pound is also dodged as this can ruin any momentum for counter-attacks. Stick with flaming weapons and heavy hitting attacks and eventually this bear will be slain. Go back to Daphnae to turn in the pelt and obtain another piece of equipment: Master's Artemis Belt.

This absolute unit can be found in the southern-most island of Messara in the Fertile Battleground. There is a small lake on the western part of the region where the bull resides. For this one, again you'll need to slay it, which considering Herakles only captured it is a bigger ask.

The Kretan Bull can charge very quickly, so should not be attacked from afar if possible. If you're hit by its charge, it will take a huge chunk of health off, so make sure you're fully dodging by holding down the dodge button. When up close, it can perform several attacks with its horns, the most common of which will be to turn and swish them around. It can also do a kind of barge with its flank, so ensure you're familiar with its tells of lowing slightly.

Also, try not to approach from the back as it can also buck around to kick you with its rear legs. Keep close to its side and dodge its big horns and eventually it will drop to the ground. Skin it and give the pelt to Daphnae for Master's Artemis Outfit.

To find this cackling monster, you'll need to head to Kythera Island, specifically the southern tip of Skandeia Bay. There's a green part on the map, just slightly north of that southern tip, where the hyena resides. You know the drill at this point - stock up on fire skills and slay the beast quickly.

It's very nimble and will lunge if you're too far away. There's a tiny bit of time after it jumps where you can close the distance, but lock onto it as much as you can to get the best position to attack it. Once it is finally slain, go back to Daphnae to receive Master's Artemis Hood.

In the foothills of western Dioskouroi Peninsula, towards the eastern tip of the region of Lakonia, you'l find a pack of three wolves where one is that fair bit bigger than the others. You'll want to end this fight as quickly as possible since the Lykaon Wolf can summon more wolves to its cause at any time by howling. It may be tempting to just take out the lesser wolves, but really they'll just keep coming in huge numbers. If you're feeling like there's too many of them, having an area-of-effect attack can help prevent them from overwhelming you and your health bar.

Otherwise it acts like many other wolves, only slightly quicker and that bit more ferocious. Give them to her and she'll give you Master's Artemis Treads in return. After you complete the final hunt, if you've been trying to flirt with her by choosing the heart conversation lines, you can finally woo her here.

The final task that Daphnae sets you... well... is to challenge you to mortal combat. Naturally you'll want to back out, but she informs you that doing so will make you an enemy of her people. Trying to convince her won't bear much fruit, so it really is a binary choice at this point. If you do defeat her, you'll instead make allies of the Daughter's of Artemis.