Though it may have been part of some of the more expensive versions of Assassin's Creed Odyssey that are available, the quest-line that The Blind King takes you through is one of exploration. It allows you to find monuments of the past in the form of statues, temples, and certain famous locations.

It also is accessed really early on in the game, provided you're not a particularly rude so-and-so, you'll be asked by a blind man masquerading as a beggar to go find a bunch of locations that he heard in tales from his childhood. In this guide, we will go through where to find the five monuments that the nice blind Persian man wants to hear more about, since he can't see them himself.

Hunting for these viewpoints is a decent way of introducing newer players to their importance. Newer players can go to our Assassin's Creed Odyssey guide to learn a bit more about how to play the game itself, but those who want the locations for this long-winded quest, do read on.

Artaxerxes is a blind man who just wants to listen to tales about certain monuments he heard about in his youth. You'll find him near the Temple of Apollo on the island of Megaris. Upon talking to him, as long as your conversation is somewhat civil, he will explain that there are several monuments he wants to hear about. You'll need to travel to each one and find the corresponding viewpoint to be able to recant enough information to please him. You can find out more about the editions with the Blind King quest-line in our Assassin's Creed Odyssey The Blind King guide. 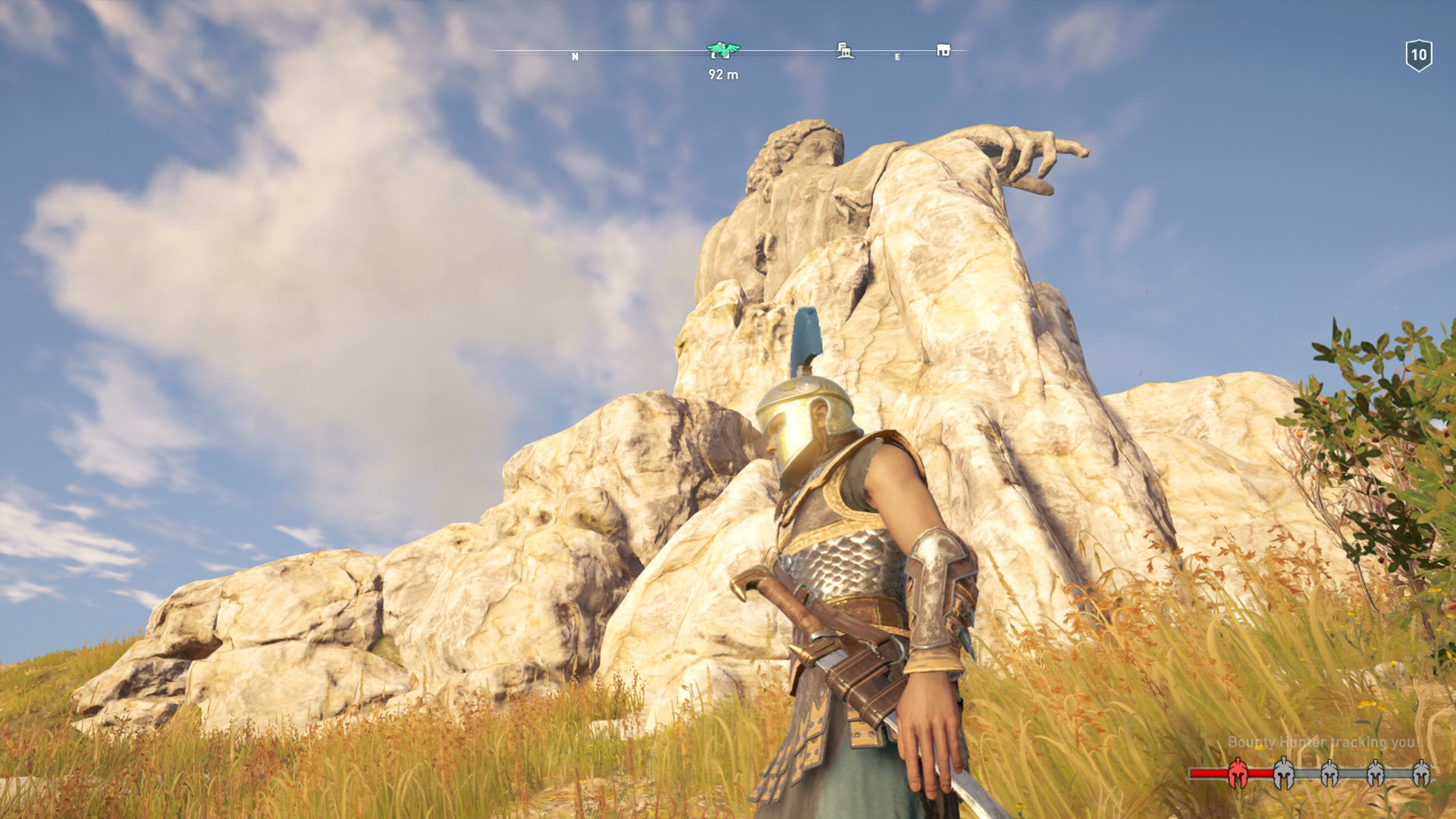 On the island of Kephallonia, there is a massive statue in the middle of the island. You can't really miss it as it is the biggest structure on the island that can be viewed from anywhere in the region. Climb up this gigantic structure and use the viewpoint to allow you to tell Artaxerxes about it. Oh and yes, you can climb on that bit. 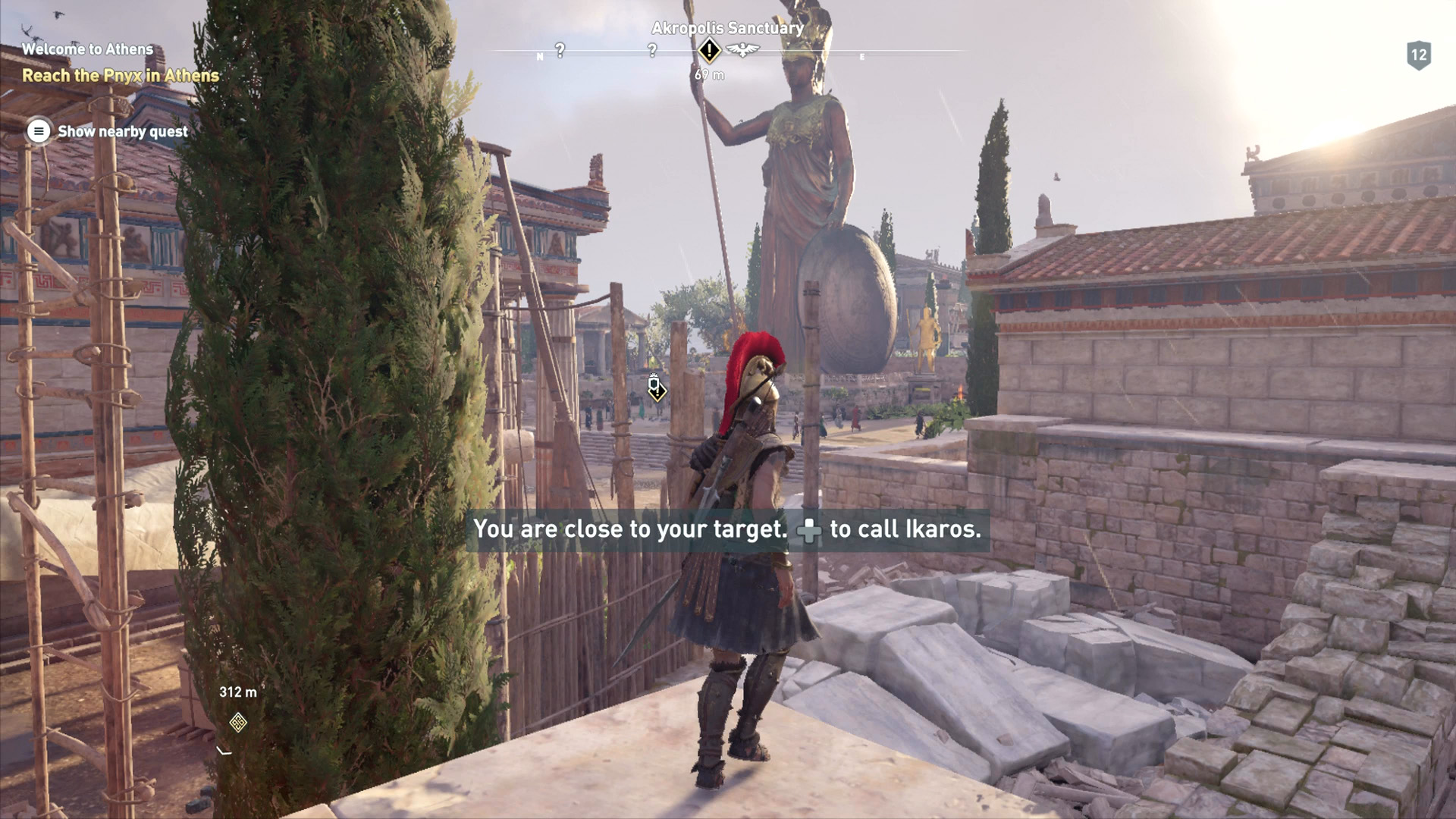 As your hero will say, there's many statues dedicated to the goddess Athena, but Artaxerxes mentions on in particular that stands tall over Athens. Head to the Akropolis Sanctuary in Athens, close to where you meet Herodotus in the Pnyx. You should see a towering statue with gold armour. This is the statue you need to climb, so head on upwards towards the viewpoint. When you reach close to the top, your hero will comment on the statue. 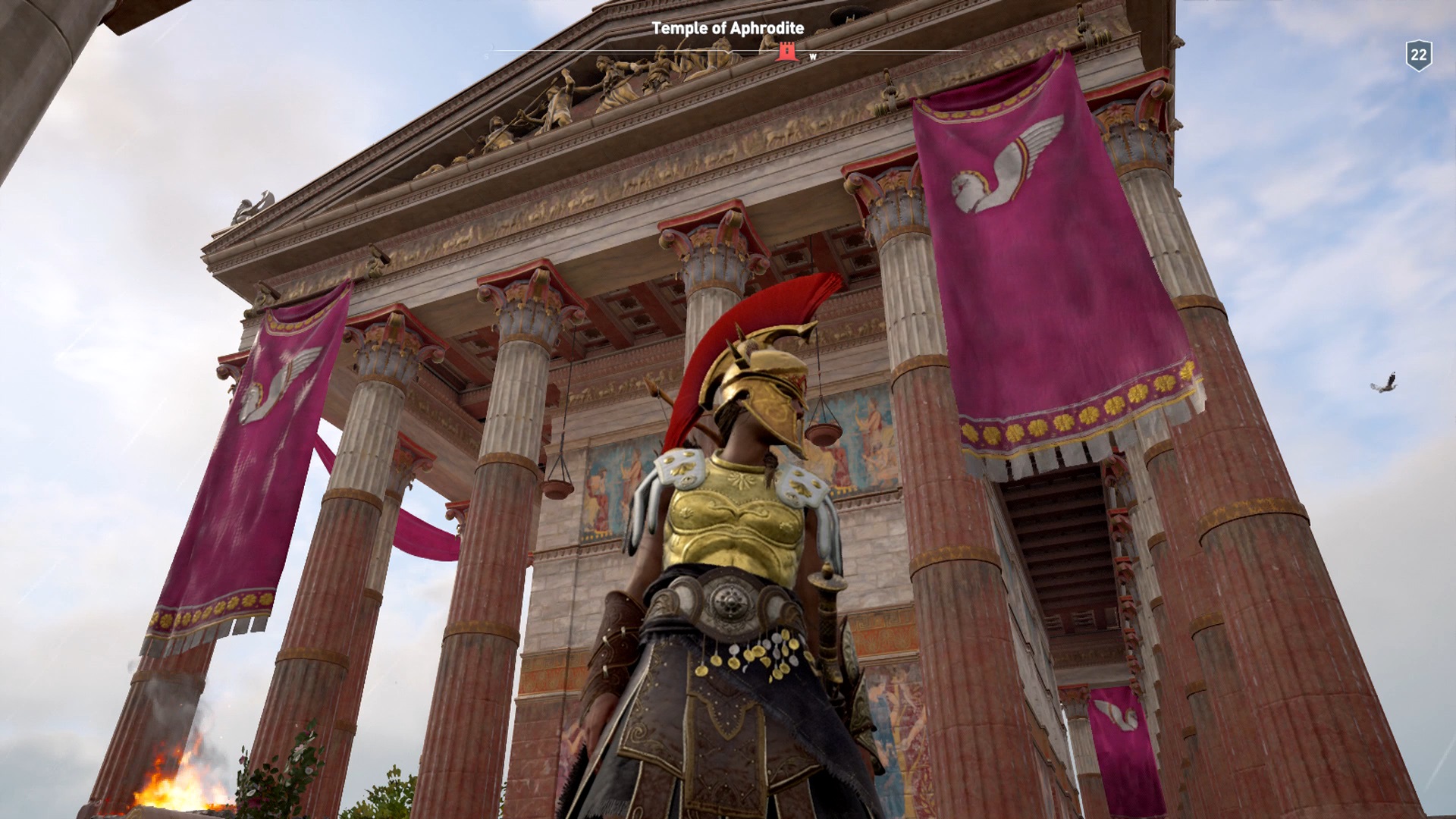 Upon reaching Korrinthia, you may notice a massive mountain south of the city that looms over the city. It's big enough to cast a shadow over the entire place. You'll need to make the pilgrimage up the mountain and climb the Temple of Aphrodite itself - adorned with pink banners and murals dedicated to the goddess. Synchronising with the viewpoint at the top will net you the story to tell Artaxerxes. 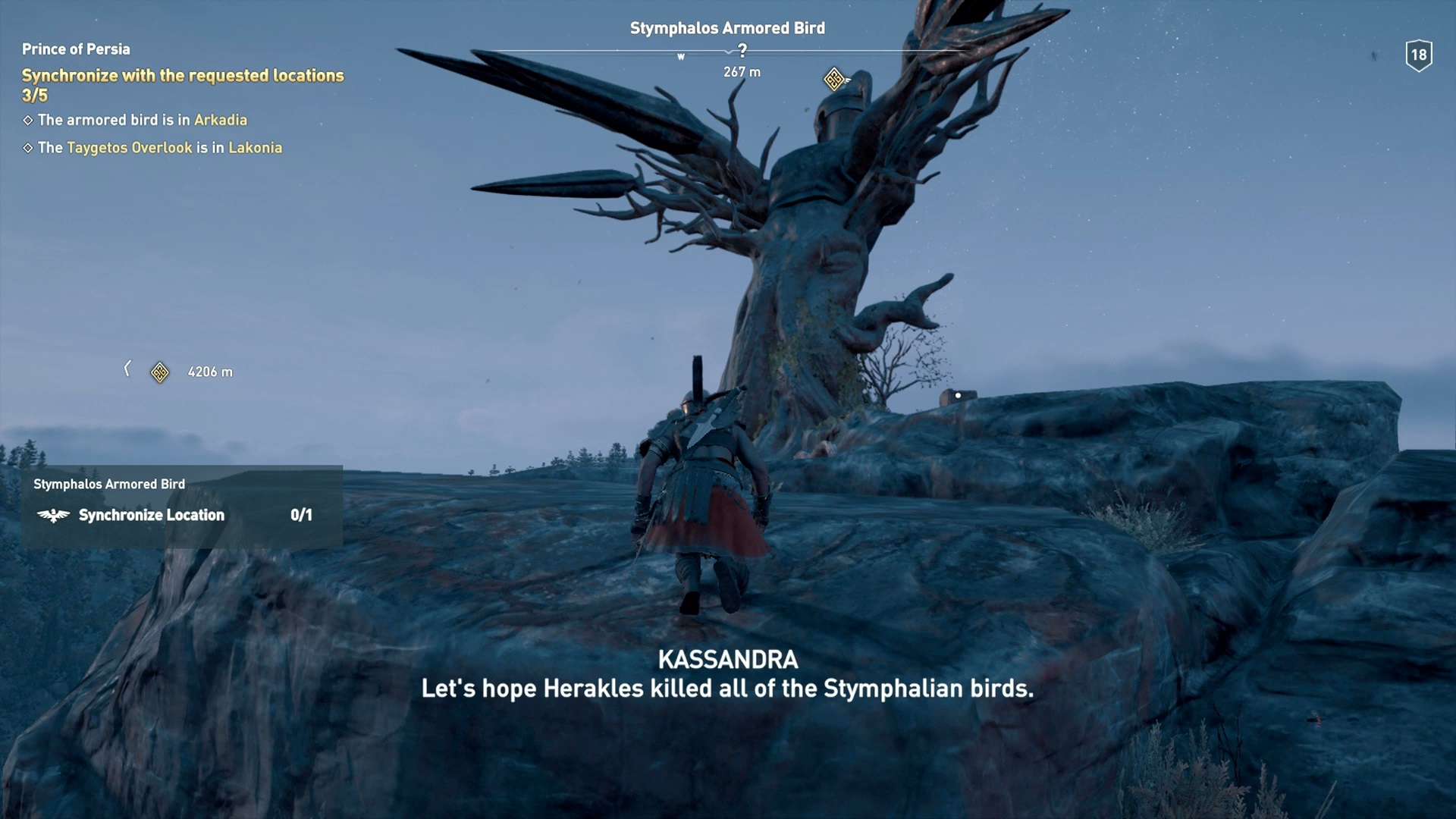 West of Korrinthia in the northern point of Arkadia close to the border with Achaia is the Stymphalos Armored Bird. It is also up a very high point and is essentially a tree with armour plating. Be careful if going into Arcadia as the enemies are relatively highly levelled. However the bird's location is relatively obvious as it's the only real viewpoint in the area. If in doubt, use Ikaros and look at the peaks of mountains for the viewpoint. 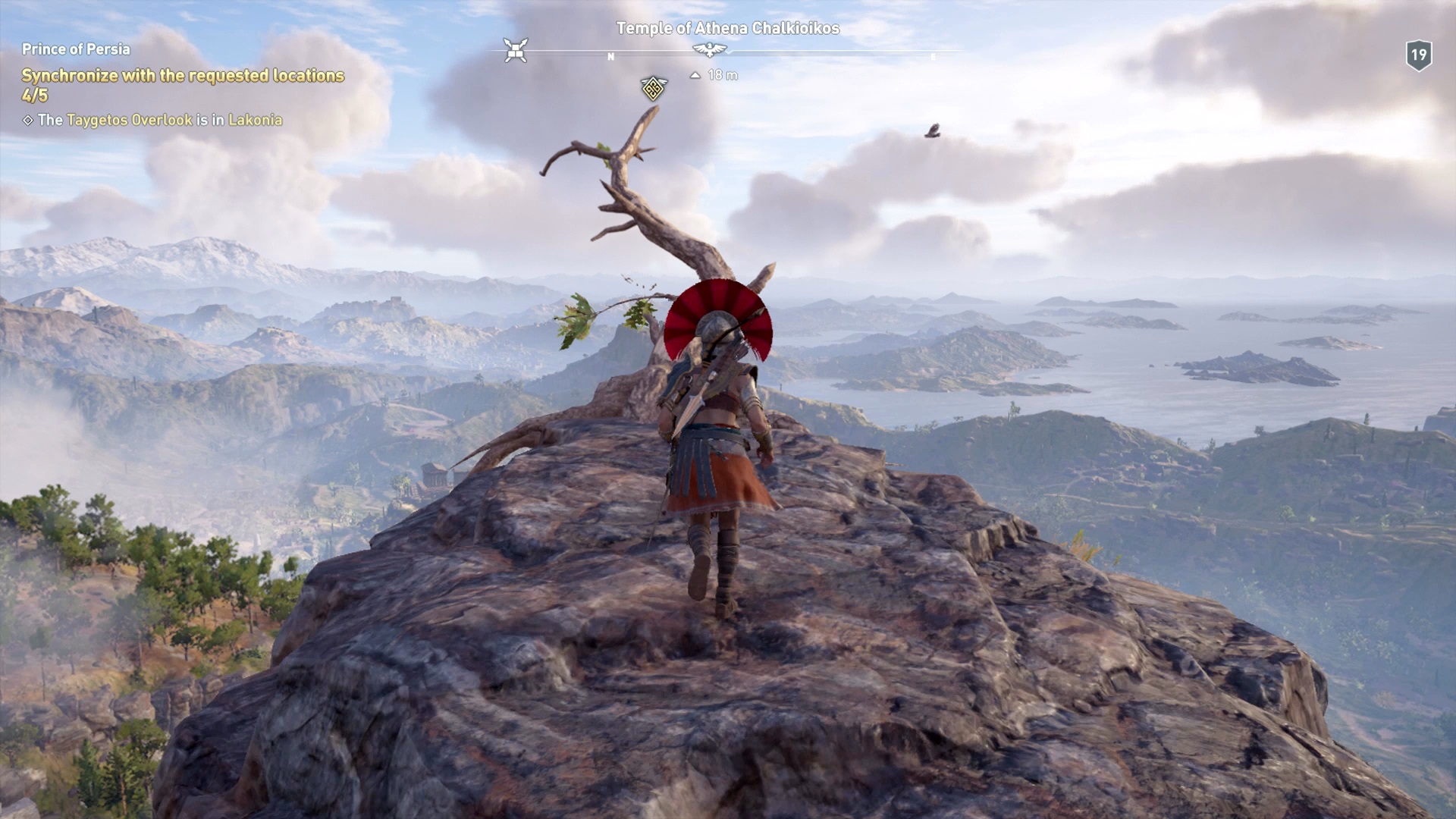 Perhaps this will invoke bitter memories for your hero, but the last location is the Taygetos Overlook, which is a fair bit south-west of Sparta, and the south-west of the Forest of Eurotas region. You'll see a mountain with a huge tree branch hanging off of it. Climb the mountain and synchronise for the final entry. If you want to celebrate, why not take a leap of faith into the water below? Once you've had that plunge, head back to Artaxerxes in Megaris and recant your tales.

You'll be interrupted by a Persian soldier who wants the blind man's head. You have a choice to either let him kill Artaxerxes or kill the soldier. Should you kill the soldier, Artaxerxes will thank you by revealing the location of some treasure. 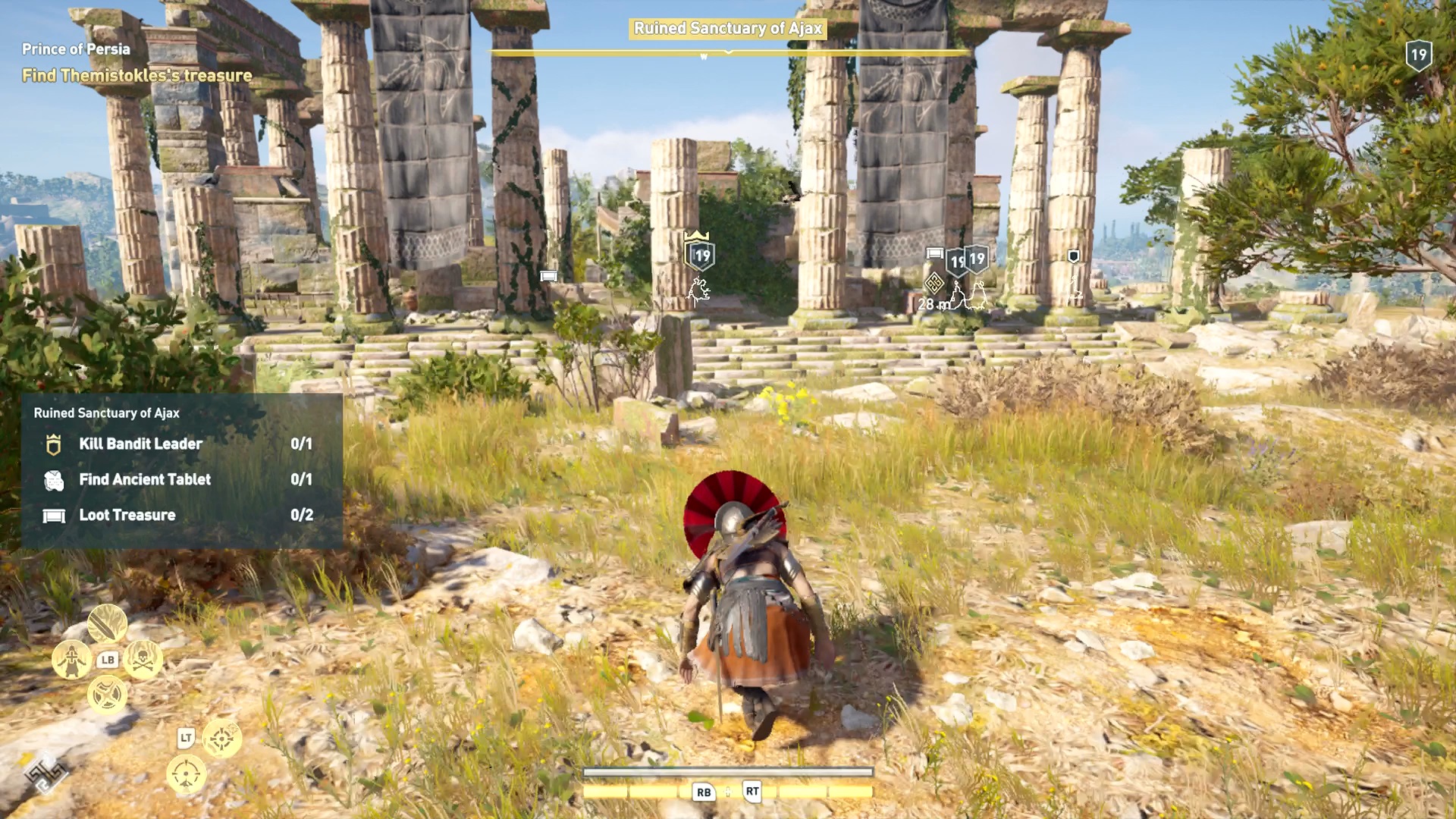 You'll find the treasure on the island of Salamis, just off the coast of Athens. There's no viewpoint here, so you'll have to sail over there from Athens and disembark in the port nearby. Once on dry land, head to the south of the island to the Ruined Sanctuary of Ajax. It's likely that there will be bandits guarding the treasure, so kill them all however you see fit. You'll find a treasure chest here, marking the end of this rather elaborate tour of Ancient Greece and netting you a nice amount of stuff to sell. Note that this is not one of the chests required to complete the local area, so be sure to look very carefully.