Skill points are obtained with every level up in Assassin's Creed Odyssey. However there are many crypts that house structures called Ancient Steles, which upon finding and examining them also grant invaluable skill points to assign to abilities. Scattered across the world are various tombs and crypts that house some elaborate mazes, filled with traps and snakes and all other sorts of nasty hazards. Exploring them can lead to valuable treasure, but the main prize is the Ancient Stele that each crypt contains. This guide will show you where to find the Ancient Stele that each of the crypts has inside, in order to gain some free skill points. 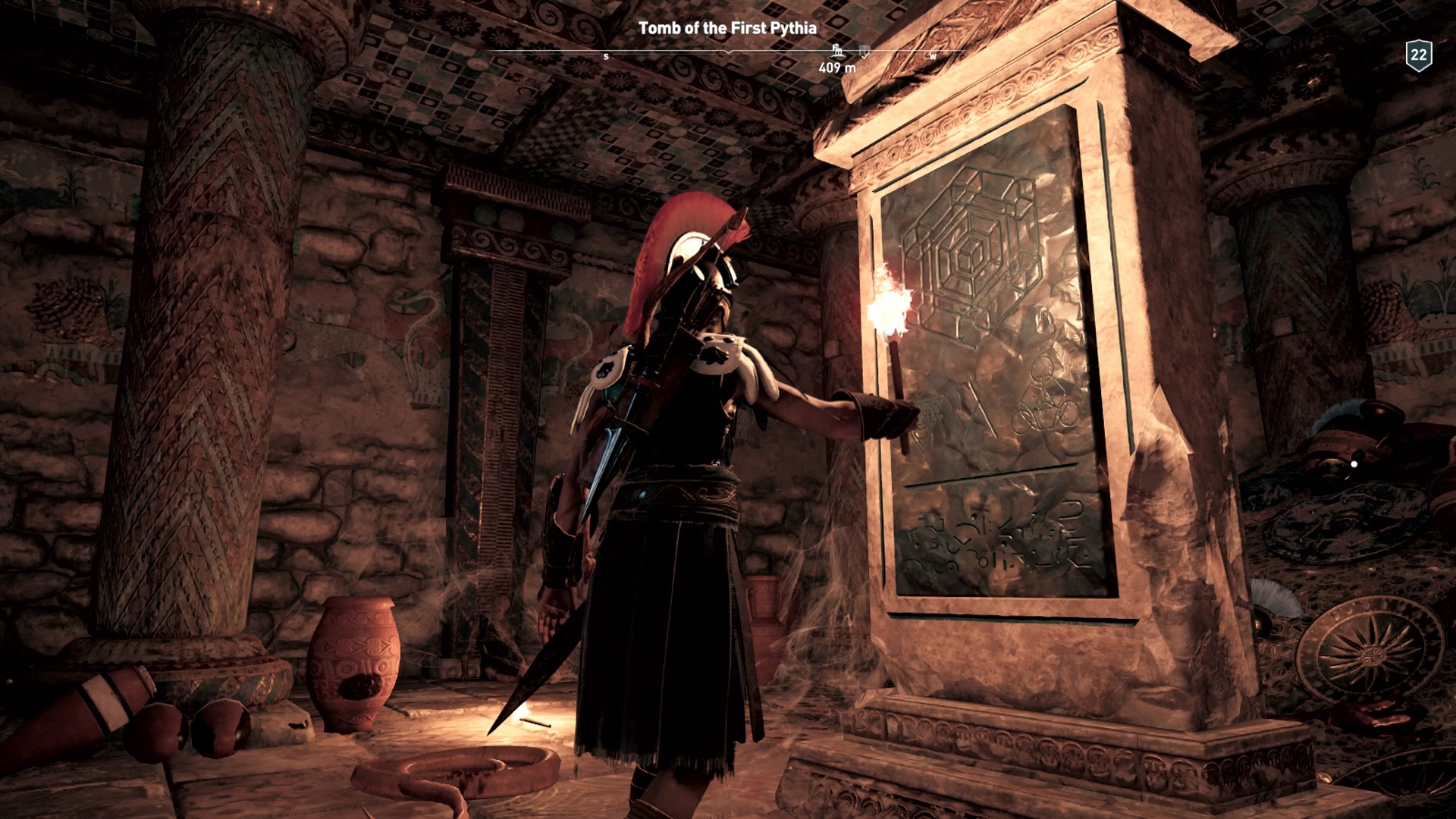 Even the ancients dabbled in a bit of archaeology. These ruined crypts house a host of floor-based traps and tons of snakes to kill. They're also pitch black, so you'll have a torch that can be equipped at any time. When dealing with the snakes, you can throw your torches at them like using ranged weapons, or if you're feeling brave you can melee attack them instead. Note that they'll always deal a third of your health in damage with their bites, so be careful not to get surrounded. You'll also need to smash pots and masonry to find hidden areas. Below are the locations for each of the Ancient Steles found so far:

Tomb of the First Pythia

Found west of Frand Mount Parnassos, head inside the tomb and turn right at the hearth. Smash the pots and slide under. Be prepared with a torch to attack the snakes you’ll find here. Head downstairs and kill the snakes, being careful of the pressure plate spike trap in the centre of the room. Turn left and follow the corridor until you see a mural. There is a snake next to it. Break the wall to find the Ancient Stele. You’ll get experience and a skill point for your troubles.

Close to the Valley of King Lelex in Megaris, head into the chamber to the right as you enter and break down the wall. Hit the snake and continue until there is a fork in the path. Turn left for the Ancient Stele, while the pots to the right hide a room with treasure and a snake. There is a second set of stairs left of the Stele which has another treasure chest and a couple of snakes.

Mycenaean Tomb of Ajax
On the Isle of Salamis, defeat the guards surrounding the outside, then knock down the wall to head inside. Head down the corridor, killing any snakes you come across. The room left of the pressure pad spike trap has a treasure chest, but a ton of snakes, so be careful if you decide to loot it. The next room has three holes, one on each side of the room. The left-hand one has blood all over it, indicating a trap, while the right-hand one has a chest.

The centre one has some stairs going up. Be mindful of both traps and snakes on the ground. You’ll eventually come across a room with a hole in it. Down the hole is the Ancient Stele and some treasure. To escape, move the barricade from the hole, travel through the hole and dodge roll immediately to avoid the spikes, then head upstairs to exit.

Located near the western edge of the Sacred Plain of Demeter in Attika, this place is really dark inside. Crack the wall as you go in and follow the path down. Spike traps and snakes are plentiful, so mind where you go. In the first chamber, the pots lead to a snake, so don't bother with breaking them. Follow it around and in the second chamber you'll see a wooden wall. Kill all the snakes, one in the pots, one near the treasure chest on the left-hand path, and one on the right-hand side. Pull the blockade on the left-hand path back and move the second one backwards and into the new hole you've made. It won't fully fit through, but it'll give you enough of a path to clamber into the small hole. Continue through to the next chamber, dodging any spike traps and snakes, to find another chest and the Ancient Stele. To the right is another blockade that when pulled back leads to an exit.

Found on the island of Naxos, head in and break the wall.  Swim through the hole and collect the chest along the way. After a short dip, surface and have your torch lit. Pull the barricade to collect a chest and the Ancient Stele.

On the island of Delos, close to the Kynthos Ruins, head inside and break the wall. Head down the corridor, watching out for the usual snakes and traps. In the chamber, turn left and hit the pots to reveal the next path. Take the left path, and enter the room with a hole in it. There will be snakes on both floors, so throw torches to get an idea of where to land and kill any snakes. On the bottom floor, there is a chest, but also near a barricade, there will be a mural with a crack in it. Break it to reveal the Ancient Stele.

To exit the tomb, head through the door and travel upstairs. There will be a hole that you can slide through which leads to a spike trap maze. The end of which has a chest. At the top of the stairs, move the barricade to reveal a hole that leads outside.