While it is perhaps the rarest of all the resources in Assassin's Creed Odyssey, Orichalcum ore isn't the most efficient way to get good gear. It's a special mineral that can only be redeemed at a certain shop the territory of Phokis and it's remarkably hard to come obtain a lot of. You'll only be able to find it by completing certain quests from the bulletin boards, or on the very odd occasion they can be found in very remote locations. Our guide will go over how to collect this valuable resource, as well as summarise what little you can spend it on.

Before I go any further, it's worth pointing out that items bought via Sargon's shop are remarkable, but you can get incredibly good stuff elsewhere that will carry you through the rest of the game. Certain cultists, as detailed in our Assassin's Creed Odyssey cultists guide, have legendary items that can outclass everything you can purchase here. There are also certain items that can be obtained by defeating mercenaries, so look at our Assassin's Creed Odyssey mercenaries guide to find out more about them. 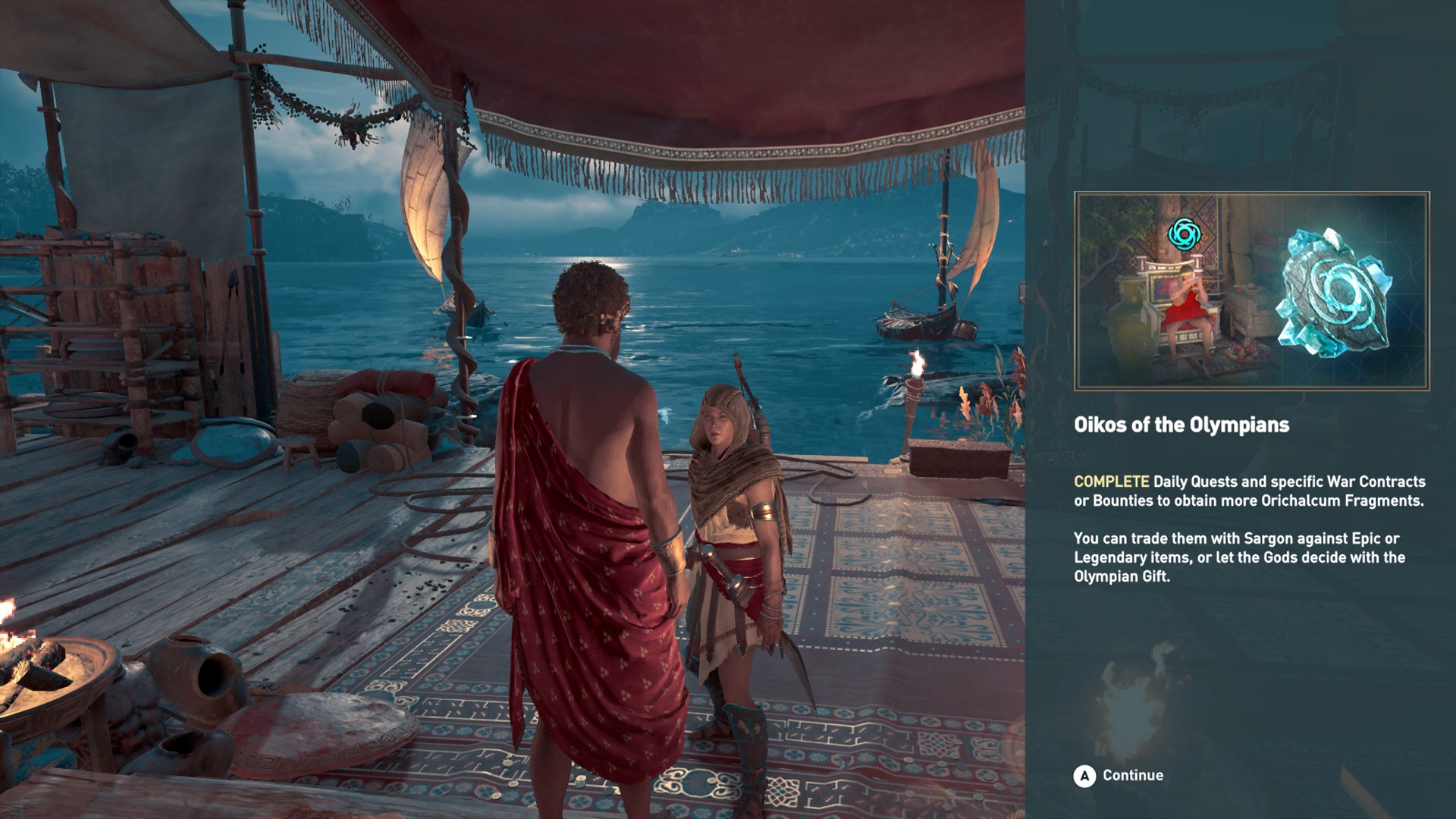 Getting Orichalcum in Assassin's Creed Odyssey

The first way is to complete the daily quests or war contracts. Found on every bulletin board in settlements, that you can find out more in our Assassin's Creed Odyssey side quests guide, you'll get ten Orichalcum for every daily quest you complete. You can only complete one per day, no matter how many bulletin boards you visit, but if you remember to complete them daily, you'll be able to accrue a decent amount in the space of a week.

War contracts on the other hand are long-winded challenges that require you perform certain tasks, kill lots of a certain enemy. They tend to take a bit longer to complete, but they also have a time limit that you need to complete them in. Again, the amount gained is small at best, meaning you'll probably be completing quests over the course of a month in order to afford just one item.

Another way of getting it is to head for really remote areas of the map, such as mountain peaks, deserted beaches, tiny islands in the Greek coast, and under bridges. It's the very definition of a needle in a haystack. Once you've found Orichalcum in the location you're in, the valuable mineral won't respawn, so it's not worth returning to the same place multiple times.

What can you buy with Orichalcum?

In the shop, you'll be able to purchase certain items that aren't found elsewhere in shops: epic and legendary items. Mostly these are just the same epic and legendary items you can get from looting certain enemies that work in exactly the same way as any other weapon or armour part. Those who would like to delve further into items can look at our Assassin's Creed Odyssey inventory guide.

There are some unique items that aren't found elsewhere. Four items will be displayed for a week, with a countdown timer. There's also a permanent item that is semi-randomised. You'll be able to purchase it to get either a random epic or a random legendary item.

That's it for our guide on Orichalcum. You don't have to look specifically for this mineral to get good gear though as there's also items that can be bought and upgraded in shops for Drachmae. For items that don't cost this ridiculously rare resource, you can look at our Assassin's Creed Odyssey money guide to see how get lots of Drachmae in very quick time.