The bounty hunters and mercenaries in the newer Assassin's Creed games are more than just a regular enemy. They can turn up in the most inopportune moments, usually in the middle of a quest or looting a particular location, to relentlessly hunt you down. If left unchecked, they can put a spanner in the works, setting you back a fair bit if you should perish by their hand. They're a lot tougher than the regular soldiers and particularly in the early game can prove to be more than just a nuisance. Chances are you may be having a lot of trouble  with them because you committed a large number of crimes, so it's easy to get overwhelmed by ever increasing enemies. This guide will tell you how to kill the mercenaries, and also explain how to remove bounties on your head. 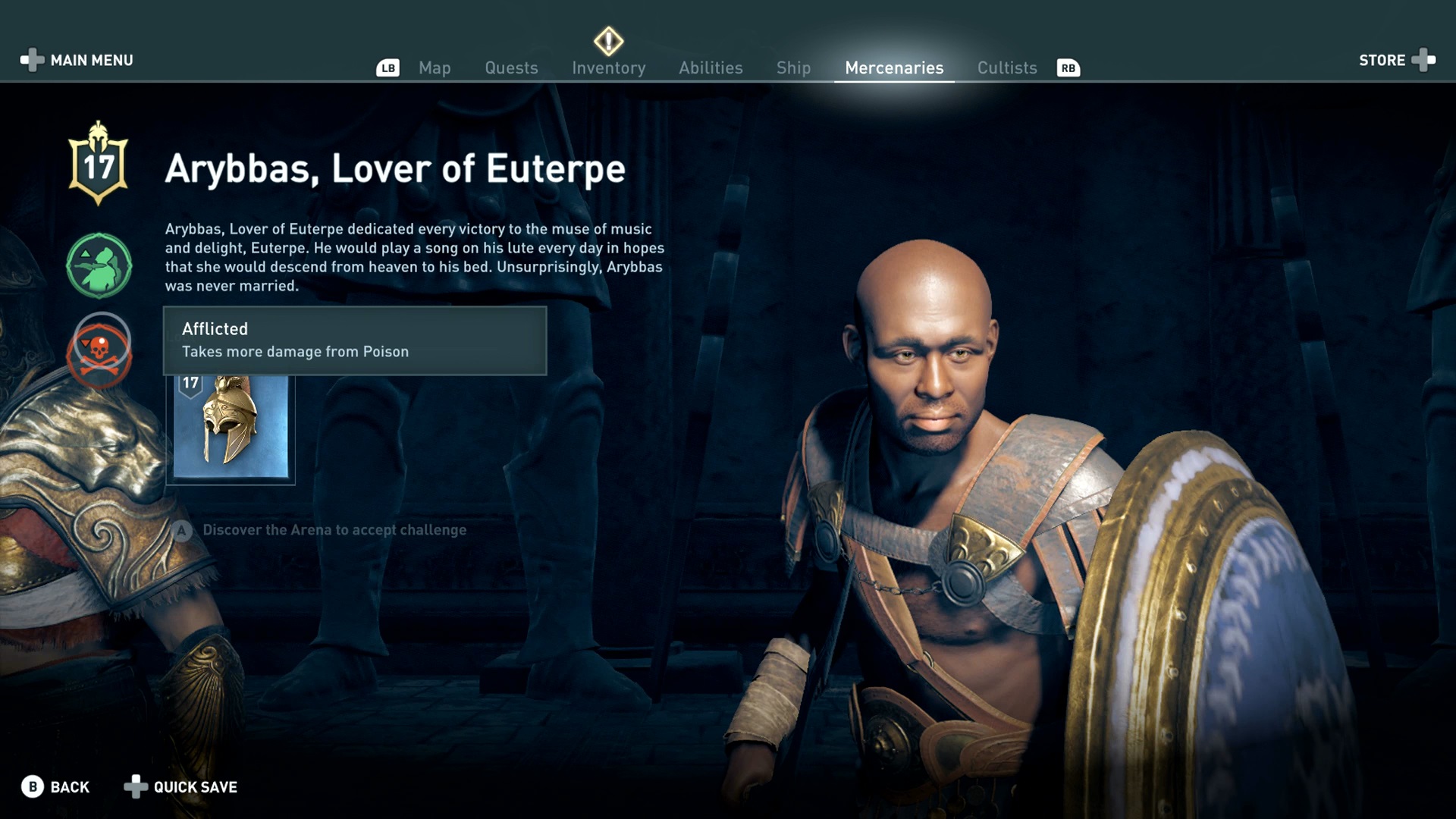 How to kill mercenaries

Of course you can always opt to fight them instead of fleeing. Should they be of a similar level, it is advisable to do so as you can get plenty of rewards such as new gear or materials for upgrading your ship. As for which materials you can use from killing mercenaries, our Assassin's Creed Odyssey sailing guide has the details on that.

Mercenaries are a bit like fighting elite enemies, more on that in our Assassin's Creed Odyssey combat guide, but they're just that little bit tougher. Some mercenaries have attacks that imbue their weapons with fire or poison, while others are accompanied by pets.

Luckily, once you know who they are, they'll appear in the mercenaries screen in the pause menu. Going into their profile will give you a bit of background on their personality, as well as any resistances or weaknesses they may have. Some may be more susceptible to poison attacks, while others resistant to ranged combat. It's also worth noting that mercenaries can be recruited in the same way that elite guards or captains can, so try to go for non-lethal damage at the end when you can if you like the way a particular mercenary attacks.

You may be wondering why you'd even consider hunting the mercenaries in the first place. The simple reason is that some may have some legendary equipment on them, as we detail in our Assassin's Creed Odyssey inventory guide, should you manage to kill them.

As you kill more and more mercenaries, you'll go up through the various tiers. These provide various rewards that are permanent upgrades, so are worth pursuing if you want things to be cheaper in the open world. The tier rewards are as follows:

At some point, when Ubisoft fix the apparent teething issues, there will be Epic Mercenary events in Assassin's Creed Odyssey. The first of these will be Damais the Indifferent, though when he will appear seems to be all up in the air as Ubisoft have tried and failed to implement his event twice so far. It's likely that he'll be a ruthless mercenary for you to hunt down and likely have some decent equipment for killing him, but at this stage it is unclear when that will be for sure.

I'd expect that their third attempt at putting him in the game will come at some point in November, when we'll update you as to how Epic mercenaries work and why you should consider hunting them down. 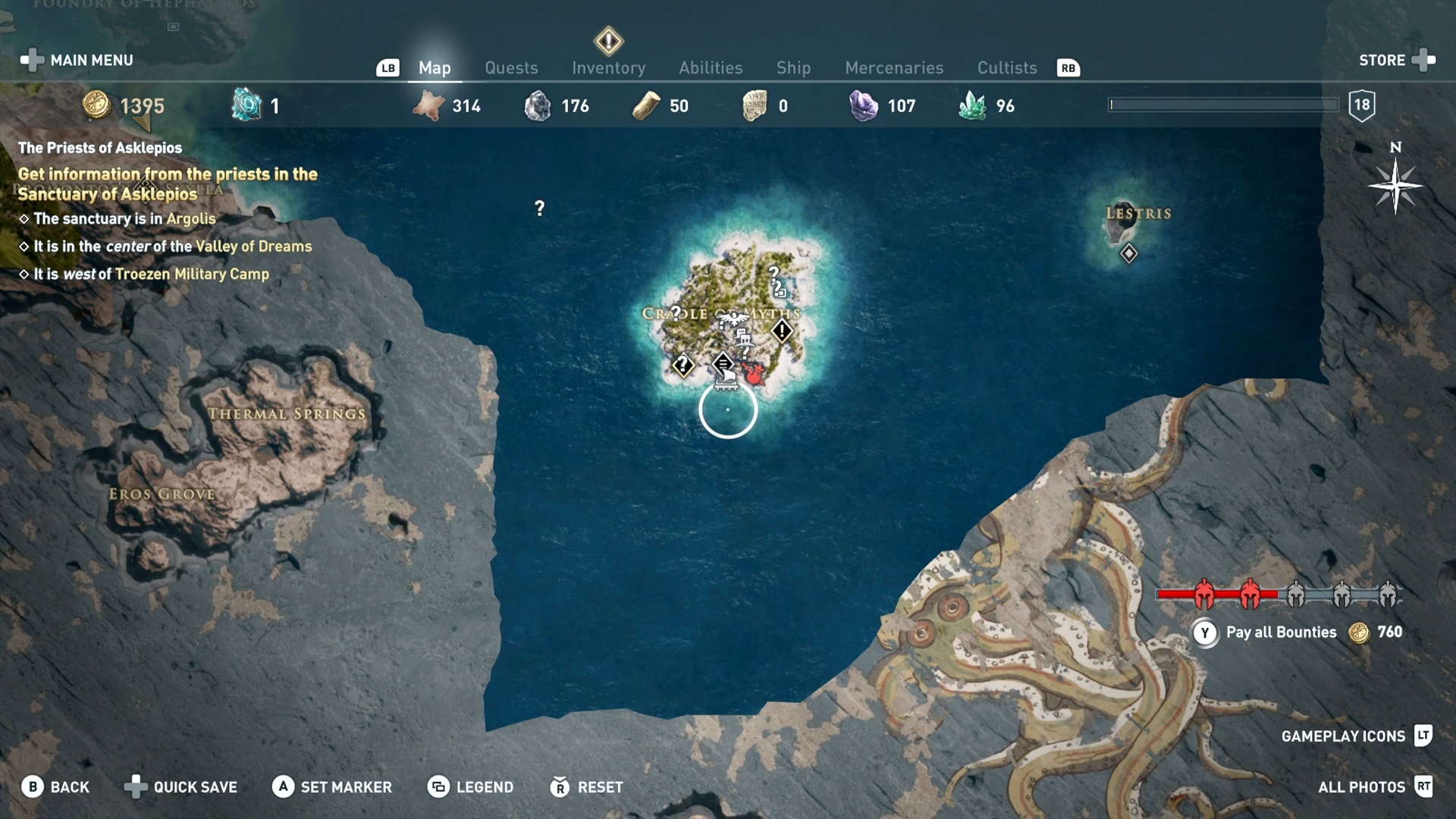 Naturally, killing people and stealing is bad, especially if someone sees it. Normally this would just provoke the ire of guards, but in more recent Assassin's Creed games there is the potential to have a bounty on your head. These are opponents of certain ranks, each one having a particularly nasty weapon that you must somehow deal with.

If you wish to fight mercenaries, then being bad is the way to go. However, try to ensure you're not doing so many bad things that you attract the bounty of multiple mercenaries, as things can quickly get overwhelming. You can check this on the bottom right hand corner of the screen. Before long though, there may be times where you have to fight.

But how do you get rid of your new-found notoriety? There are three ways that you can do this. The first and most time consuming is as simple as waiting for the bar to go down and staying out of trouble. There may be times where this is the most convenient way of doing so. But this is by far the least effective way of removing the bounty.

A quick fix is to just pay the ransom yourself. This is done by going to the world map and paying the bounty by holding the button assigned to your current bounty amount. It's a quick and easy fix, but there are times where it costs an extortionate amount of Drachmae. There may be times where you're so poor from buying new equipment or just paying people in missions that you won't have enough funds. Should it ever get to five mercenaries hunting you down, the bounty cost may just be out of reach. Find out how to make more money in our Assassin's Creed Odyssey money guide.

In those instances, I recommend just killing the sponsor who put the hit out on you. This will be shown on the map, usually in a fort relatively close to where you first picked up the bounty. You can always go over and kill them. This is the riskiest way to get rid of a bounty, as if you're spotted by anyone while trying this, you may find other soldiers lighting beacons to alert other soldiers, as well as mercenaries on your trail.

For tips on being stealthy in order to take out these people who set the mercenaries on you, go to our Assassin's Creed Odyssey stealth guide. The only other thing of note is that there is the potential for more than one bounty to be on your head for multiple infractions, so you may need to take out multiple targets.

Now that you know everything about mercenaries, it's probably a good time to get out there and upgrade your skills to try and get the advantage in combat. Head over to our Assassin's Creed Odyssey skills guide for details on the best skills to pick up in the early game. You can also look at our Assassin's Creed Odyssey combat guide for details on how to fight these foes effectively.