Assassin's Creed Valhalla finally has a release date and Ubisoft even showed off some actual gameplay! You can now see just how grim the dark ages were in 9th centry England, from viking sieges of Saxon castles to fighting witches in dingy swamps.

Assassin's Creed Valhalla has a release date of November 17, 2020.

Can I buy Assassin's Creed Valhalla on Steam?

Assassin's Creed Valhalla will be available on Ubisoft's own Uplay store, but it will also be following the trend of Ubisoft games appearing on the Epic Games Store rather than Steam.

This does not mean that Assassin's Creed Valhalla won't come to Steam eventually, but so far there is no confirmed Steam release.

It's been a rather hectic week, what with the Ubisoft Forward stream last night and the gameplay leak before that. It shows vikings raiding a small village, using stuff looted from those villages to build up viking settlements. The gameplay trailer also shows lots of enemy types, including one that yeets their dead friend at Eivor. Of course, as a viking, Eivor is no stranger to combat, being able to dual wield weapons like a flail and an axe, or even slamming two shields into an opponent's face. There is also a small stealth segment where you hide in plain sight, though this isn't emphasised.

Valhalla also has its fair share of secrets hidden throughout the land. One that was shown requires you to align your camera to form a pattern on some rocks. Your settlement also needs food, so hunting and fishing are important side activities.

You could look at the stuff that Ubisoft have in their trailer above, but Video Matthew has spent three hours as a viking, and you really should check out his first impressions in our video below. His video and Alice B's Assassin's Creed Valhalla preview are what truly got me excited for Valhalla. As Alice rightly points out, Valhalla is not really an Assassin's Creed game, but that's fine because, "...it feels like a really good Viking game where you smash people with axes."

Before this though, we didn't see much of Valhalla. The "gameplay" trailer that was shown on the Microsoft stream didn't show a heck of a lot. Microsoft even admitted that they "set some wrong expectations", but Alice B did highlight some of the best bits.

In recent weeks, numerous Ubisoft staff and studios have been accused of sexual harassment, abuse, and discrimination by colleagues and members of the public. The company have vowed to investigate reports and to fix their culture. Another three executives resigned today in the wake of the allegations.

Assassin's Creed is a series of games that has been hopping around history since 2007. Since Assassin's Creed Origins, the games have changed from their beginnings as a stealth action game. Much like an RPG, there are now multiple dialogue choices and a greater emphasis on improving your gear. Assassin's Creed Odyssey was the previous game in the series and was very well received.

Revealed through the art of "BossLogic" during a live stream, Assassin's Creed Valhalla will take place during the Viking invasion of England in 873 AD. Ashraf Ismail - the game's former director who has since stepped down following allegations about his personal life - had cited Michael Crichton's 1976 novel Eaters Of The Dead as a major influence for the setting.

The reveal trailer also hints at some Norse Mythology, as the eagle is being replaced by a raven and there are visions of Odin appearing in the middle of the battlefield. The mythological elements made for some of the more memorable moments in Odyssey, so it's no surprise that they return here.

In a recent interview with the Washington Post, Ismail revealed that Valhalla was first conceptualised when development on Origins was completed. He explains that “The Viking Age is something that I’ve been in love with since I was a kid. So this was an opportunity to bring the nuance of that time period, the culture, the people, in a way that only Assassin’s Creed can."

Valhalla also looks to move away from some of the RPG elements recently introduced into Assassin's Creed, such as levelling up, instead relying on the accumulation of skills and on scaling enemies to match the skills the game expects you to have when you meet them.

Odyssey featured two playable characters: Alexios and Kassandra. Kassandra was by far the more popular character, so it's good that we got an idea of what the female lead looks like in Valhalla. Both characters in Valhalla are called "Eivor" and they will be facing off against the Saxon armies of England, including the likes of Alfred the Great.

It will also continue the story that has been building up in modern times, following Layla Hassan - an assassin who featured in both Origins and Odyssey - and her connection to an advanced civilisation called the Isu.

It's also worth saying that Covid-19 has not derailed Ubisoft's efforts to develop Valhalla. Ismail was asked by Kotaku how the pandemic has affected the team's ability to develop the game. He credited Ubisoft's IT team, who had "gone above and beyond to make sure everyone has what they need – hardware, software, anything they need to do their job – so, yes, there’s an adaptation, but things are going well. Of course, day to day, week to week, we’re monitoring how we’re doing and how things are moving forward." 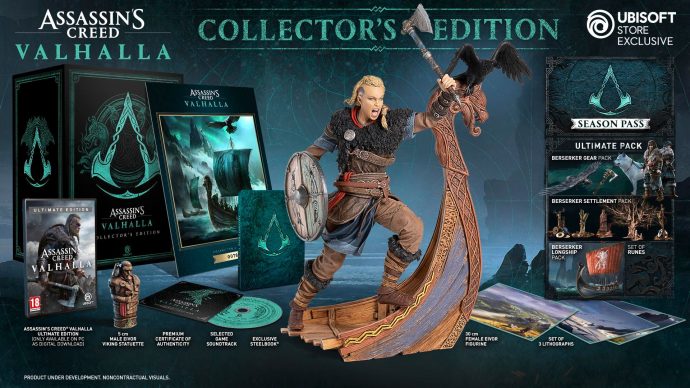 Is there special edition of the game?

Yes, in fact like a lot of Ubisoft's games, there's more than one edition. To make it as simple as possible to see what you're getting for your money, here is what each edition of the game includes:

You may have noticed that there is also a season pass mission called "Legend of Beowolf". A German listing found by GameRant suggests that the mission will try to link Eivor to the mythical tale of Beowolf. Given that we saw Alexios or Kassandra take on mythological monsters in Odyssey, having Eivor meeting the Grendel is not a big surprise.

This concludes everything that we know about Assassin's Creed Valhalla so far. We will be continually updating this as more information comes to light.

If you can't wait to slam a Viking axe into Saxon skulls, Alice B compiled an excellent list of 8 best Viking games to play before Valhalla that should keep you occupied until later in the year.