If you click on a link and make a purchase we may receive a small commission. Read our editorial policy.
Every other Monday, we give you a reason to dust off one of your old games and dive into its mods with Modder Superior. This time, Craig is rip-roarin' and yeehawin' with some favourites for Red Dead Redemption 2.

Whenever I return to Red Dead Redemption 2, I find myself wanting to be released from the shackles of Rockstar’s design. Much like the Van der Linde gang, I’m looking for a place of my own, one that’s free from the concerns and constraints imposed by The Man. So I turn to mods, where I can make the west wild again.

Red Dead’s modding scene lags a little bit behind GTAV’s. I’m still waiting for the public release of this lawman mod and for the online role-playing mods to get a little more mature before plunging in. To that end, all the mods below add to the experience of playing the game rather than the content, but I’ll always keep an eye on Red Dead 2’s modding scene, just in case something spectacular arrives.

Modding Red Dead is a manual affair. The two mod managers I tried out are both pretty broken, so there’s no getting around the fact that this is fiddly. RDR2 generally requires a small file to enable mod loading. There are various kinds around, but I use Script Hook RDR2 - although unfortunately the download for that went down this very day. Stay tuned and I'll let you know if it goes back up.

Once you've installed your mod base of choice (they all come with instructions - it's a case of dragging the required .dll files into your main RDR2 folder) you can add mods. That works the same way - just drag and drop the files into your main folder. I usually keep the downloads in their own folder so I know what files come from mods if I need to fix anything that breaks. If the game crashes after a recent download, I know which files to delete.

Trainers have a somewhat sketchy reputation, but you can have a whole lot of fun with the various trainers for Rockstar’s game. The desert sandbox is the perfect environment to use one, as the simulation tries its best to keep things running along without breaking the fourth wall. You might be trotting into town on a horse one third the size of a regular one, but no-one will act like there’s anything out of the ordinary.

With Customizable Trainer dropped into your game folder, F3 brings up the modding tool and the keypad lets you select the options. There are some usual highlights in it, like being invincible, running at super-speed, and being able to leap a river in a single jump. You can swap to any NPC in the game, meaning you can mosey around as a prairie pioneer or a wildcat.

It’s the silly stuff that makes it worth messing with. You can change the scale of your character model, allowing you to lope around like Hagrid on holiday. Or you can mess with your horse’s size by shrinking it down and riding around on it like a mini-scooter. For an even more bizarre conveyance, there’s a flyable boat in the mod menu.

Weather is also controllable, so if you’re in the mood you mosey around taking screenshots of lovely landscapes beset by thunderstorms. 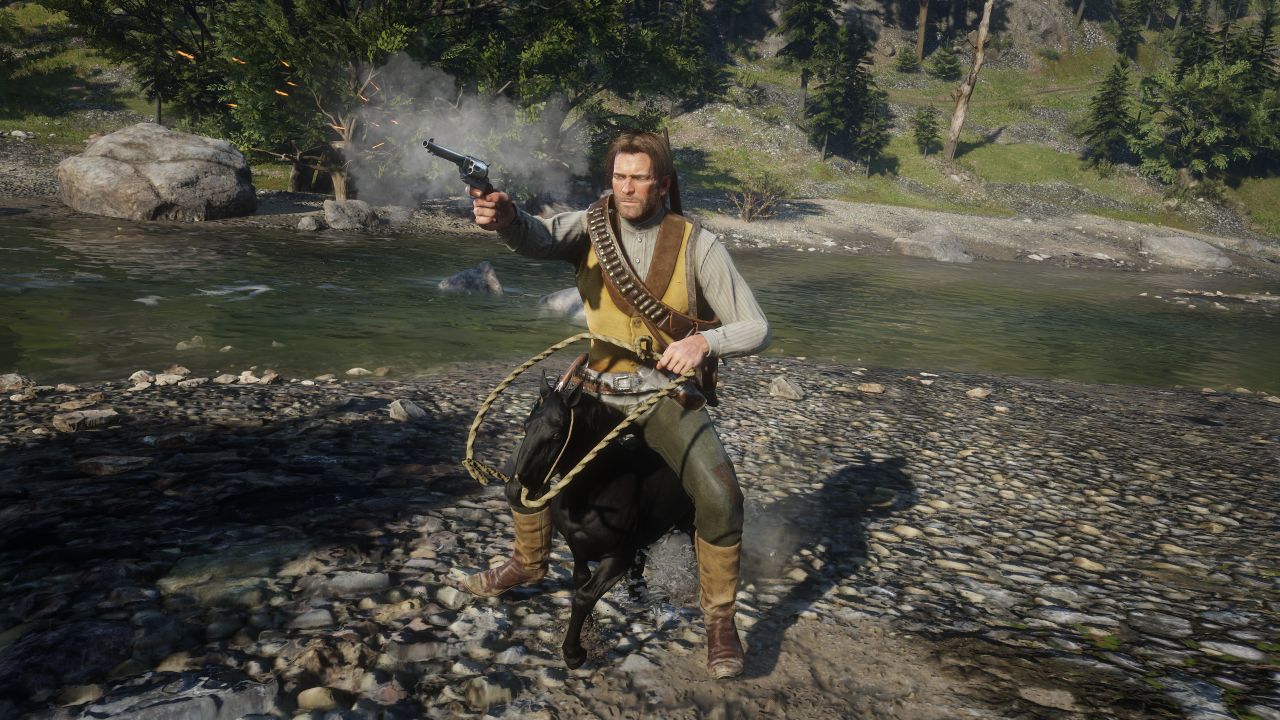 I rarely play RDR2 without installing this camera mod. Though the base game has an excellent Polaroid to play with, it’s locked down to the player and their immediate vicinity. As much as I love moody shots of Arthur looking at the horizon, I much prefer being able to take the camera into the stratosphere, where I can see all the way from Valentine to Saint Denis.

With Freecam, you have no limits to where you place the lens. Spacebar and Q enables it, and all the controls are handily listed on the new menu that pops up. With the camera unlocked you can move through the whole map with no limitations. It’s the perfect toy to take landscape shots of the detailed map.

It’s not limited to screenshots. The tilts and pans can create some gorgeous cinematics, or you can ignore it as a creative tool altogether. I use it to enjoy the world from a drone’s perspective.

The days of Red Dead 2 can speed on past like a thoroughbred that’s eaten a pot of chilli. This wrong can be righted with the Longer Days mod. With the mod files plopped into the main game folder, you can extend both days and nights for as long as you want. Just tweak the config file with your preferred number of seconds for the days and nights and you’re good to go.

This makes complete sense in the wild west. Hunting in the game isn’t a high volume activity because, as with many things in life, you’re limited to what you can carry by the size of your horse’s butt. That equine posterior can only tote so many pelts, but by adding this Hunting Wagon mod you can carry a lot more. The corpses and skins pile up and up in the back, ready for you to craft things or sell to a trader. You can even put a human in there, you sicko.

It spawns at your camp and responds to commands, meaning you can call it out to the nearest road if you’re on a hunting tear, or send it back to your camp when you’re done.

What it does is make pedestrians more “interesting” to shoot at. They’ll try and stumble along if you’ve shot their legs, take more time to recover from having the wind blasted out of their body, and lie still with the last of their life spurting out in gouts of claret. It’s not the most pleasant experience, but it’s arguably a more true-to-life response than the game’s stock death throes.

It’s also awful. You might think that the mod's additional health to NPCs makes up for some of the terrible things you’ll be doing to them, but that just means they take longer to die in a fire. I installed it, shot someone, then chased them as they left a trail of arterial blood decorating the forest. You can tweak the level of violence in the mods .ini file, but I also don’t see the point of grabbing this and the immediately turning bleeding off. 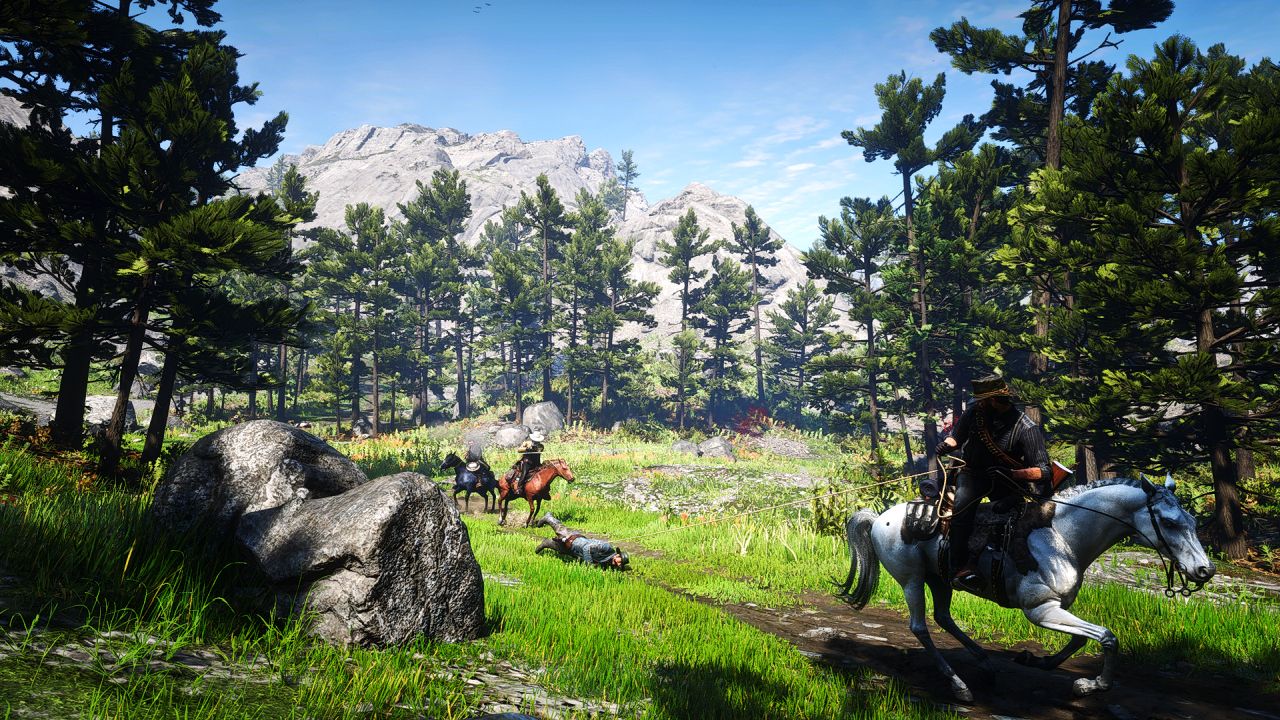 The second trainer of the day, aha! Sorry. RDR2’s trains are lovely slowpokes that you can steal. They aren’t particularly complex: you can speed up, slow down, toot your horn, and blow your whistle. Railway Engineer tweaks the controls of the steamy beasts, making them a bit more manoeuvrable.

It adds cruise control, a higher top speed, and point switching on the track. Cruise control is particularly interesting. The stock trains require you to be at the engine in order to drive them, but with this small change you can now leave the cabin and it’ll carry on moving at a set speed. That means you can use the train as a sightseeing platform, or as an unstoppable base to shoot from. I choo-choo-choose the former.

The top speed and points switching are a silly combo. As you can see below, it means you can overtake other trains on the track.