The ruinous ‘roguevania’ Dead Cells remains atop its throne of skulls - the defeated remnants of all other games released this year. If you haven’t enjoyed the electrowhips or bloodied throwing knives of this dice-powered 2D riposte to Bloodborne, go and sort yourself out instead of reading this article. I’d say “I’ll wait for you” but I know you won’t be back.

It also just received its fourth big update, adding new monsters, levels and weapons. But what impresses me most about Motion Twin’s consistent fiddling with the game is not what they change, but what they know to leave alone.

First, let’s briefly go over some new stuff. The flashy new items include an icy crossbow, some finger fireworks, a big shockwave, and a couple of shields, one of which knocks grenades and arrows back at your assailants with added power. This is a good video for seeing all the new weapons and skills. There’s also two runes that give you the ability to wall jump and stomp through loose stones on the ground. More importantly, levelling up has changed. It doesn’t feel revolutionary to begin with, but all becomes clear once you start creating monstrous rando-builds that favour one form of combat over another. I’m not going to linger on it but you can read the changes in more detail here.

The new patch has been called “the Brutal update” but given that I still haven’t beaten the second boss (a giant tentacled jerk called the Watcher) I’d say it has always been pretty brutal. I can’t even talk about the new areas (a clock tower where the level progresses vertically, and a misty golem-infested sanctuary where statues come to life) with any authority because I haven’t reached them yet. Although, with effort and luck, I know I could do it. I swear. 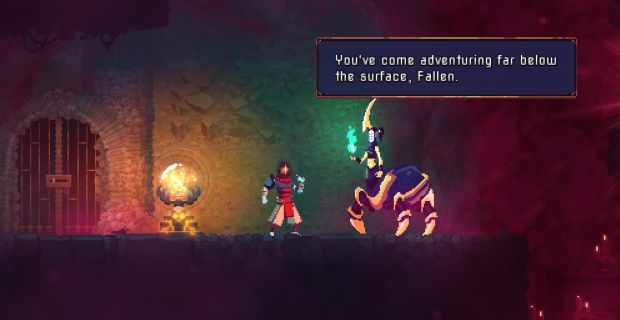 I often moan about the feeling of a game as it rests in your hands. I gave up Prey and both Dishonoreds - two gorgeous and much-loved games - partly because movement and fighting felt clumsy and staccato, all radial-wheel-pausing and bumbling momentum. Dead Cells is the antidote to that. It feels excellent. You are a responsive, double-jumping stab-freak with special powers and it feels that way from the moment you pick up your first pair of twin daggers, your first ice grenade.

Since the last time I played they’ve added speed and damage boosts following a kill, which encourages you to fight fast and leg it from one enemy straight to the next. Many of my previous builds revolved around getting a turret and ranged weapons and taking my time, bleeding enemies dry from afar. And while I can still fall back on that strategy, it isn’t encouraged. Teleporting worms chase and harass you, cannon-toting pirates bombard you from above. It feels like I’m being violently ushered into a new way of playing. I’ve even tried out these shields Adam is always drooling over. I won’t admit that they are quite good. 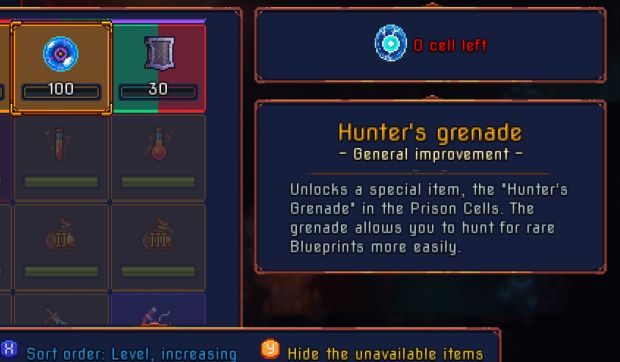 Instead, they’re focusing on giving you new choices. One new unlock lets you re-roll whatever a merchant is selling you, for a small price. Another is a grenade that lets you choose what reward you get from a blueprint-carrying enemy. As per the new levelling-up system, you sometimes find mutlicoloured scrolls lying around, which boost either one aspect of your character or another. A red and purple scroll will let you choose between increasing the damage your red weapons do, or increasing the damage and reducing the cooldown of your purple ‘tactical’ skills.

Another scroll, say purple and green, may make you choose between those purple traps and turrets, or a green boost to your health bar and better shields. And there are still level-up scrolls that let you decide between all three options (see the picture above). All this challenges you to make builds that focus on one thing or another, without altogether abandoning a single characteristic.

In short, it’s roguelike elements have been marginally improved and there is new stuff for the hardest hitter, while the platforming and combat are as sublime as ever. Part of me wishes I could still creep through it slowly, relying on ranged attacks. But the school of thought here is a Miyazakian antagonism towards the player’s complacency. What are they doing to cheese this enemy? How are they avoiding the fight? So when you try to run away from a golem and it magically teleports you right back, you have to respect the developers’ foresight. They know what a spineless coward you are, and are determined to make a speedy, fighty hero out of you, even if it means killing you.

More than this, they leave the fundamentals alone. Like fighting multiple enemies in a dungeon hallway, fiddling with a game’s design requires a focus on what’s important. Whereas I often panic and roll straight into the business end of an axe, the creators of Dead Cells seem to prioritise better. Here's hoping that continues until the game's slimey escape from the prison of early access.