There is a happy Saturday morning feel to Dicey Dungeons. It's as if you’re munching on Coco Pops and watching cartoons, as you fiddle with some toy dice that came free in the cereal box. This is a sorta-deckbuilding game about being transformed into a walking, talking dice and battling creatures on a rigged game show for a chance to "SPIN THE WHEEL" (the wheel always lands on a skull). It’s a make-your-own-luck strategy game about micro-arithmetic, about adding up chump change into shiny pound coins, then flinging those pound coins straight at the forehead of a toothy cowboy. It’s not bad.

It goes like this: you’re a dice now. You’ve come on a Faustian game show run by Lady Luck, a sinister host who makes chortling asides as you name the prize you're after. The Thief Dice wants a million dollars, the Inventor Dice wants ultimate knowledge. It doesn't matter what they want, because the game show is really a dungeon. A dungeon of connected nodes, which contain enemies, loot chests, shops, upgrade anvils, and so on. Fighting baddies takes you into a battle screen where you roll dice (the inanimate kind) and then place them on to little equipment cards to attack your enemy. 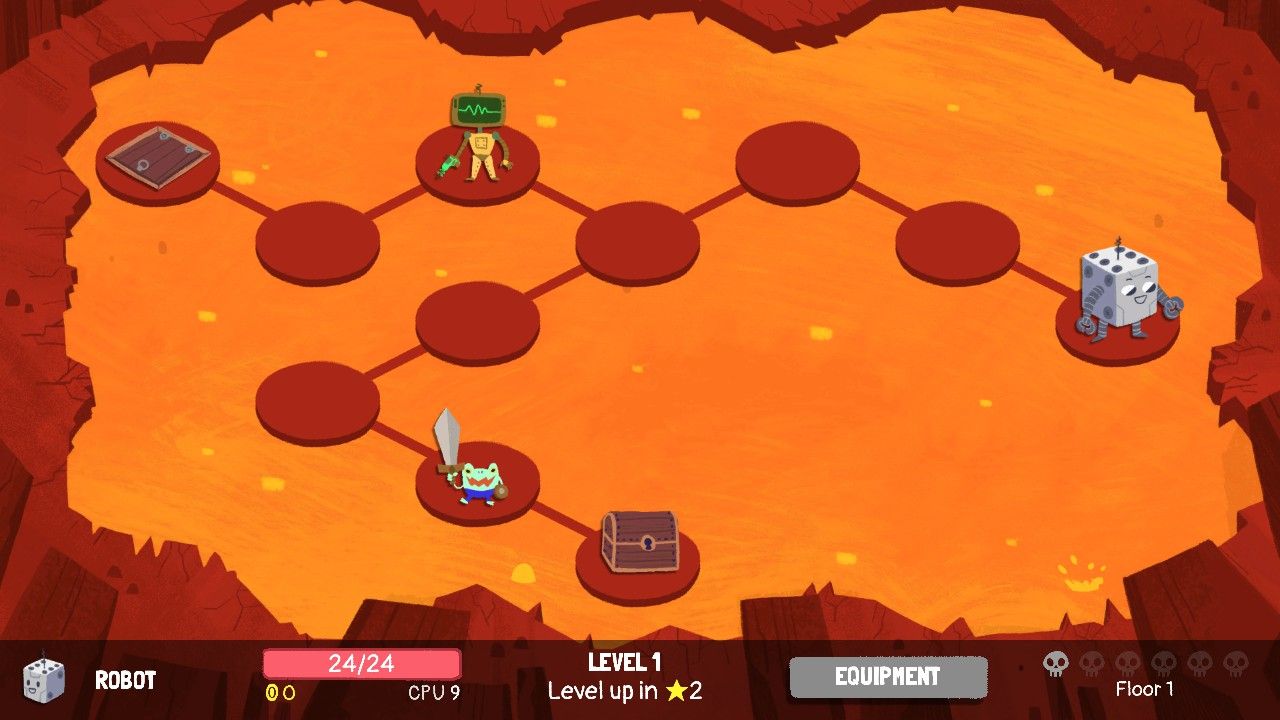 For example, you run into this tiny frog with a broadsword. What a dope. If you roll a 6 and a 3, you might drag the dice with a 3 onto a purple card called the Ray Gun, which does 3 damage to your froggy foe. Meanwhile, you drag your 6 onto a big yellow card called the Hammer, which will deal 6 damage to the damp man. And because it was a 6, it will do a bonus effect called “shock”, too (more on that in a sec).

As you're probably gathering, Dicey Dungeons is a mix of deck-building card games like Slay The Spire and dicey board games, like King Of Tokyo or Lords Of Vegas. I mean, it’s not much like those games, but I have to give you a rough idea. It's got dice, and you put the dice on things. At first, I furrowed my brow at the thought of rolling said dice, since that's one of the least interesting things you can do in any board game. But the fun here is in the tweaking and trickery you can do post-roll. There are wee cards that let you bump a die up a number, or combine two dice into a stronger, more charismatic die. There is a card that lets you split a die in two. If you feed this card a die with a 1, let's say, it splits into two 1-valued dice, completely defying the laws of mathematics but also doubling the amount of times you can cheekily stab a wolf with your dagger card. Take that, wolf and/or maths! 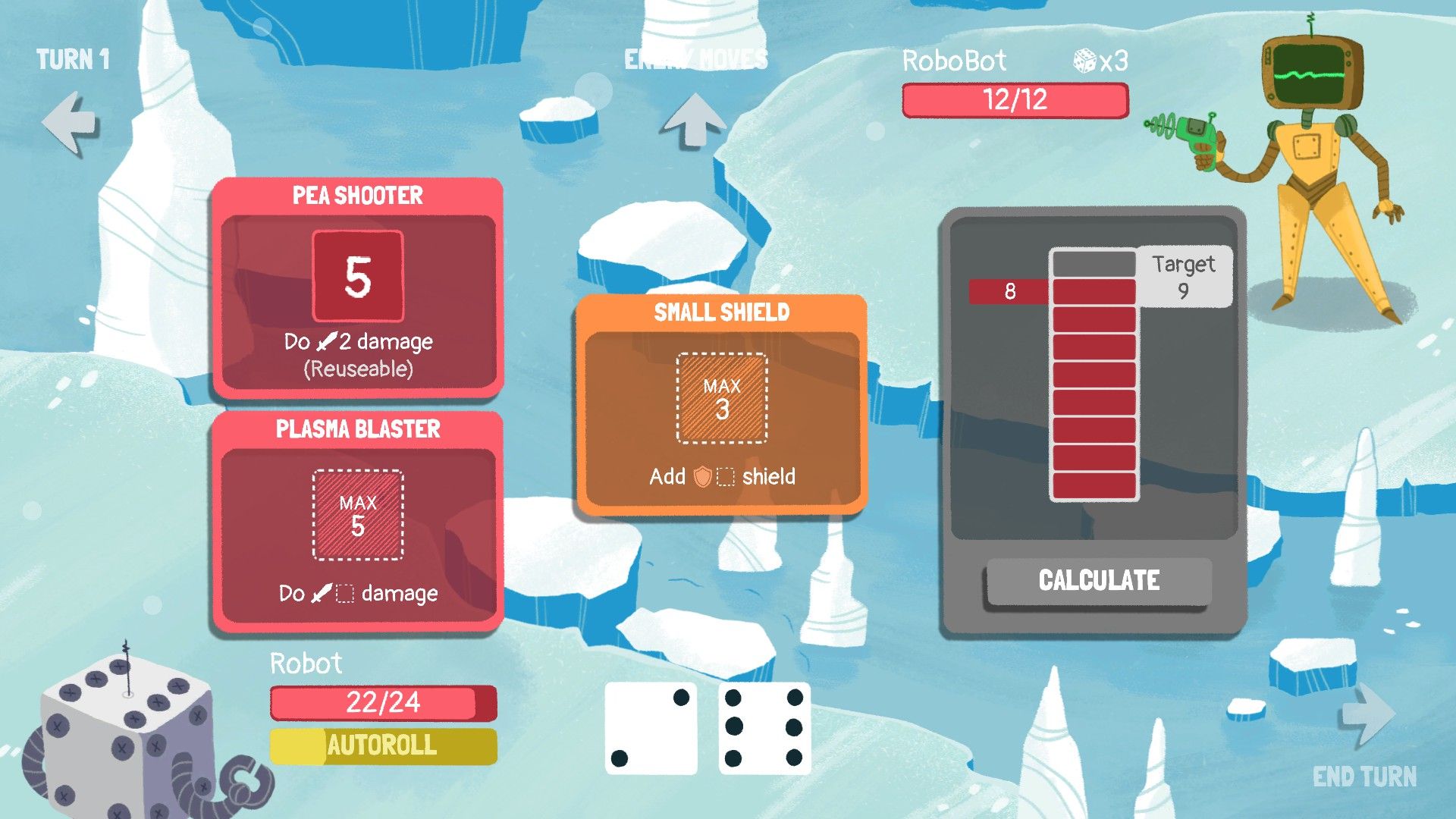 Luckily, the endless gauntlet of addition and subtraction that is Slay The Spire has prepared me for any amount of tiny number-crunching. Which is good, as it leaves me free to appreciate the game's finer rules. Some attacks will cause elemental damage, for instance. If you freeze an enemy, one of their dice will drop its value to 1. Burning a foe will cause a die to go up in flames, meaning that if they want to use it, they’ll have to extinguish the fire and take a mild two-point hit to their health bar. Then there’s shock damage, the knobhead’s element, which disables an ability for one turn, unless the enemy pays a die to unlock it again.

All these status effects can be blasted your way as well, however. Which means fighting a "Snow Man" will leave you with a bunch of frozen 1s when you really need 5s and 6s. Battling a dragon will have you blowing out all your dice like candles on a really painful birthday cake, wincing at every huff as your health is sapped. 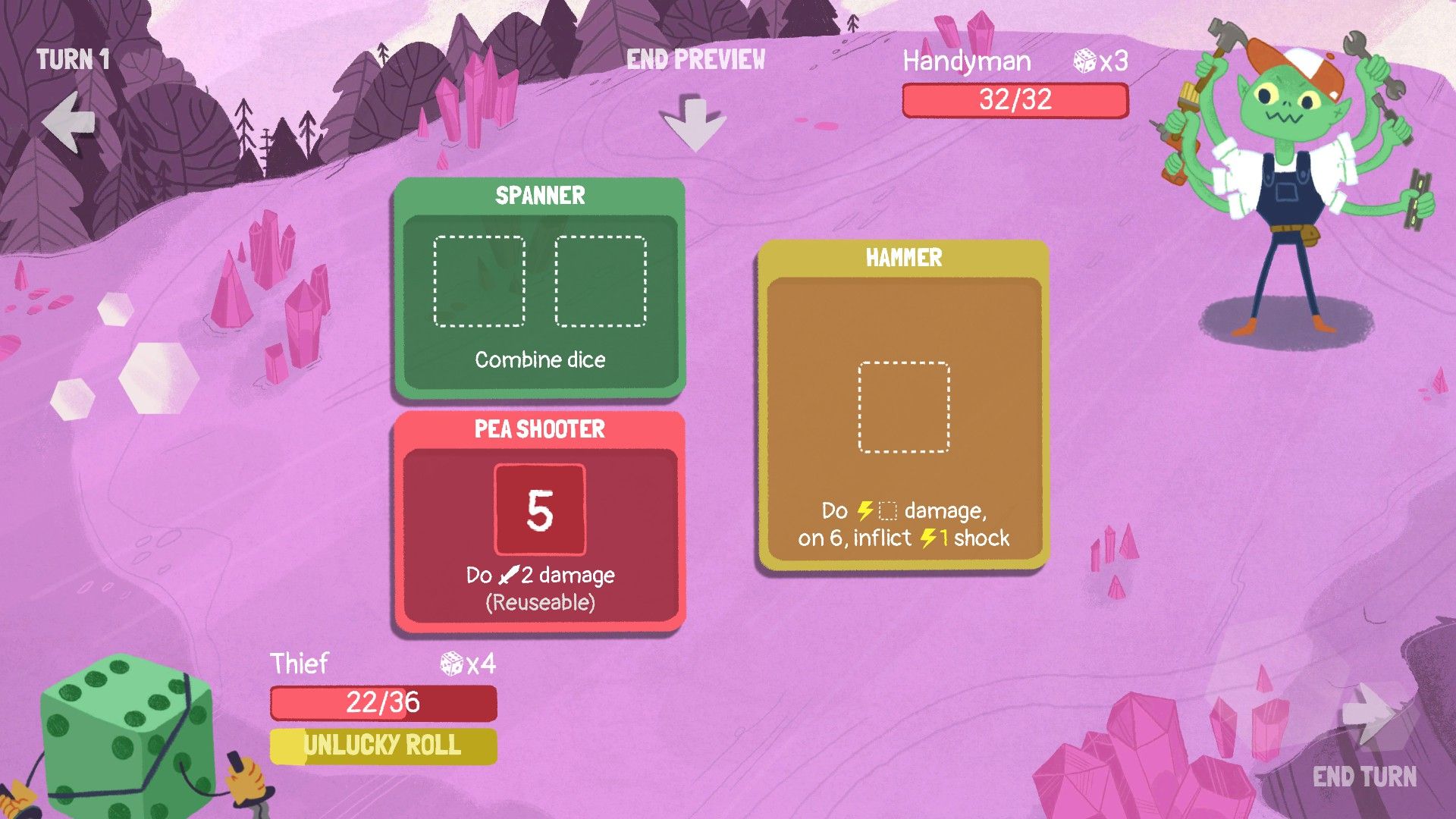 Let’s take a second to look at these enemies, actually. That “snow man” is not your traditional round-bellied figure of the festive season, but a full-on man with impeccable abs, who just happens to be made of ice. There is a vacuum cleaner modelled after Henry the Hoover who gets frustrated when you beat him. “If this gets back to the Roombas,” he says, “I’ll never hear the end of it.” Among the bosses, my favourite so far is Scáthach of Irish mythology, who uses a single dice and still manages to be a terror upon the earth. 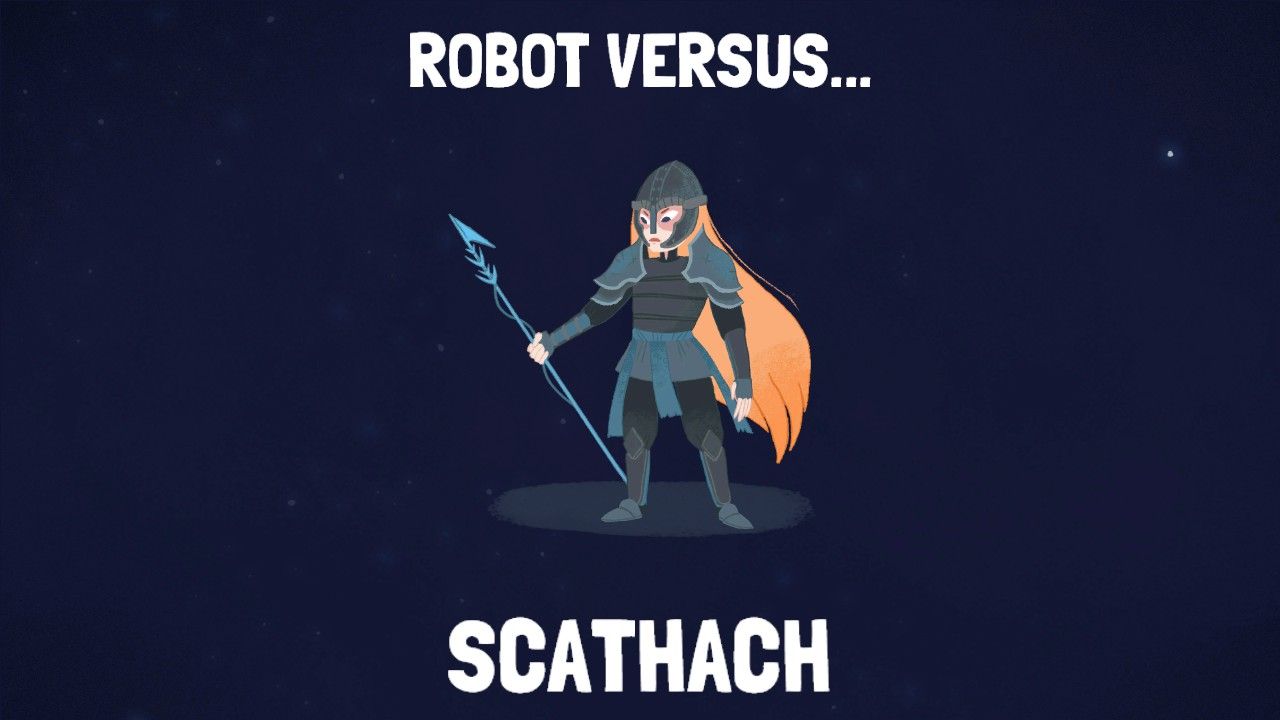 There is another boss called Audrey, who is a weightlifter. There is a mechanical ray gun wielder called “RoboBot”. There is an annoying pelican who is simply called “Loud Bird”. I cherish all these sweet nerds, and have filed the necessary paperwork to adopt them.

The dicey characters you’ll inhabit are likeable too. Not just for their cutesy smiles, but for their wily dice-massaging. You unlock each successive character by playing a run with the previous one (it doesn't matter if you win or lose, as far as I can tell). The Warrior unlocks the Thief, the Thief unlocks the Robot, and so on (there's one secret character though, whose requirements are unknown to me). Each of these characters has a special trick to them. The Warrior can re-roll dice up to three times per turn. The Witch has a spell book that unlocks new spells with each die pumped into it. The Robot can play a sort of mechanical blackjack to gamble for more dice. 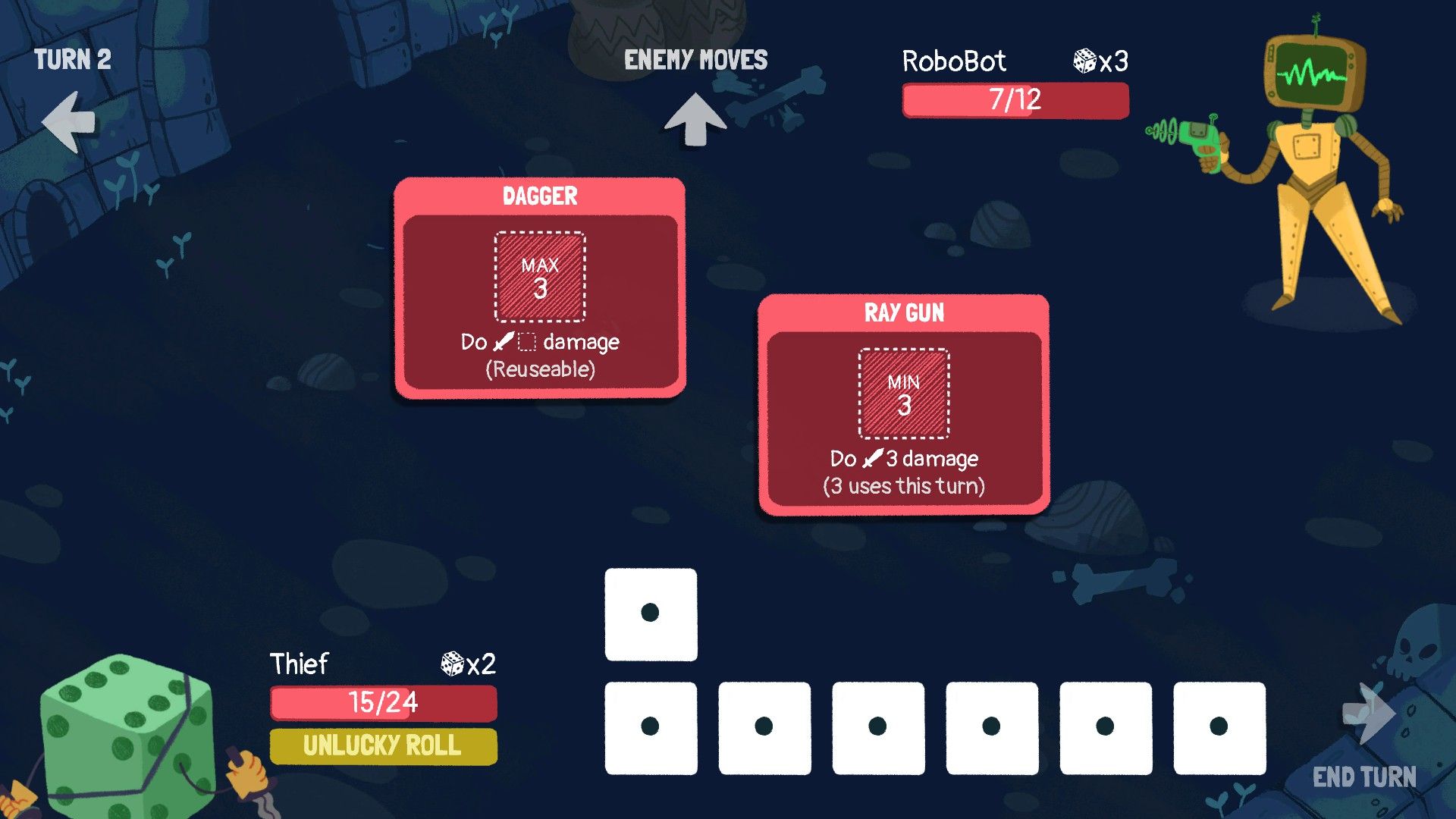 The Inventor is another challenge: a dice whizz who must constantly scrap her old equipment to make new gadgets. This makes the first few fights easy, thanks to powerful ray guns and mighty freeze blasts. But later, as enemies block your way to chests and your hunger for new gizmos goes unsatisfied, you can run low on gadgets, effectively dismantling your whole deck of tricks. It's very neat. 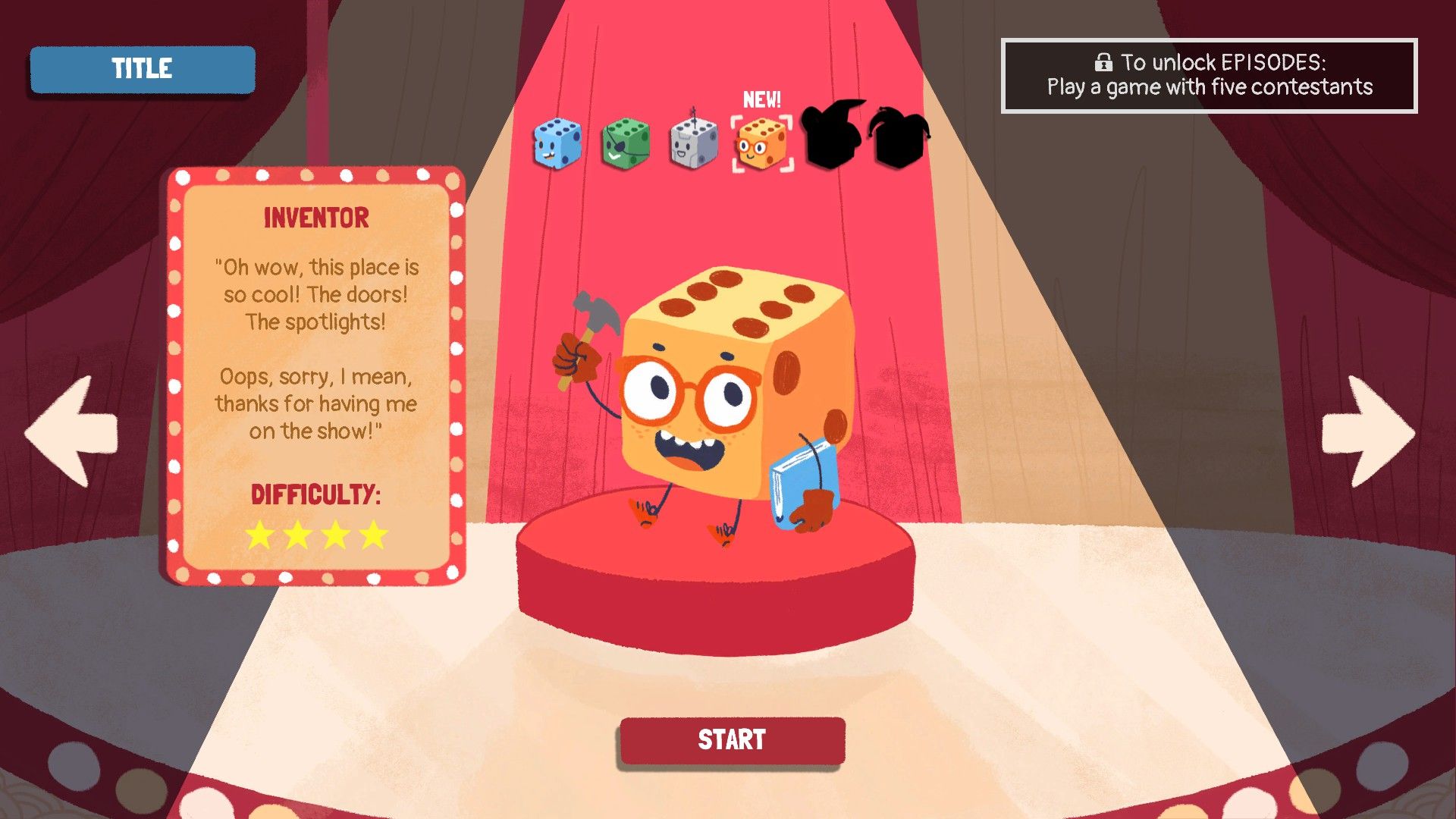 When you die, you’re kicked back to the title screen. You can take on further “episodes” (six in total for each character) where your dice are given modified abilities and different tricks, along with a disadvantage like being cursed (don't ask). But to unlock new episodes you must complete previous ones. That's fair enough, but it means longer runs still count for nothing if you fall at the final hurdle, mess up on the last floor, or even suffer a bad roll at a critical moment.

In this sense, Dicey Dungeons isn't very rewarding. Apart from unlocking the first handful of characters, you can’t brute force your way into getting new stuff just by playing over and over. There’s no sense of “compensation XP” like there often is in roguelite doohickeys. As a slow learner, that means unlocking the second or third episode for the Witch or Inventor feels (appropriately) more like a roll of the dice, than a reward for your effort. 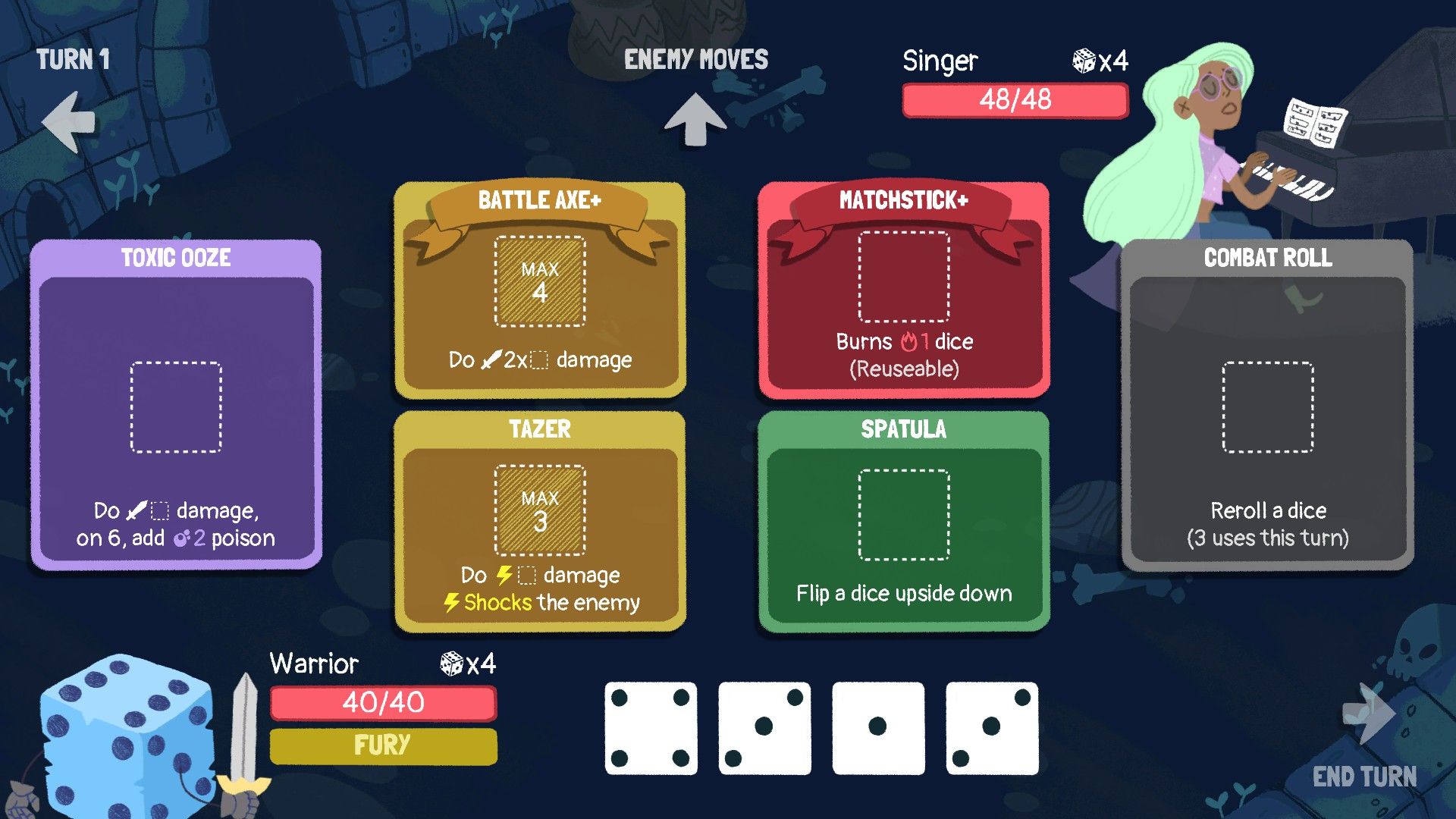 Maybe I just wish the game was a little easier-going with harder characters. You often come away from runs with nothing to show for the effort, except all the adopted RoboBots you met along the way. The rewards that come in those early few hours (in the form of new characters) soon drop away, leaving a slower, trial-and-error style of game, which rewards only success. In the Dicey Dungeons, there’s no participation medal. That’ll be okay for some high-rollers, but I’m stupid and don’t know how to Witch good. Perhaps Slay The Spire’s encouraging card unlocks, offered even in failure, have spoiled me.

It's the only problem I have, but it is a big one. Without Spire’s endless munchiness - without that steady stream of unlocks and fresh stuff - I can already feel my attention span drifting away from these grinning dicepeople and their ominous curse. I know this is a psychological lab rat hangover from years of receiving piecemeal rewards in videogames, but what can an indoctrinated lab rat do? I want that milligram of cocaine.

Speaking of Slay the Spire, it's worth repeating that once you get into the dice-fiddling proper, it’s quite different from Spire's nightmarish card-flinging. Whereas the recent SteamWorld Quest offered a recognisably Spire-ish amble through a finely balanced fantasy cardverse, Dicey Dungeons goes off into a numbery volcano and does its own thing. To be honest, I think Dungeons is the more interesting game because of that. It's just a shame some of that interest drops away because it lacks a crunchy feeling of "progression". 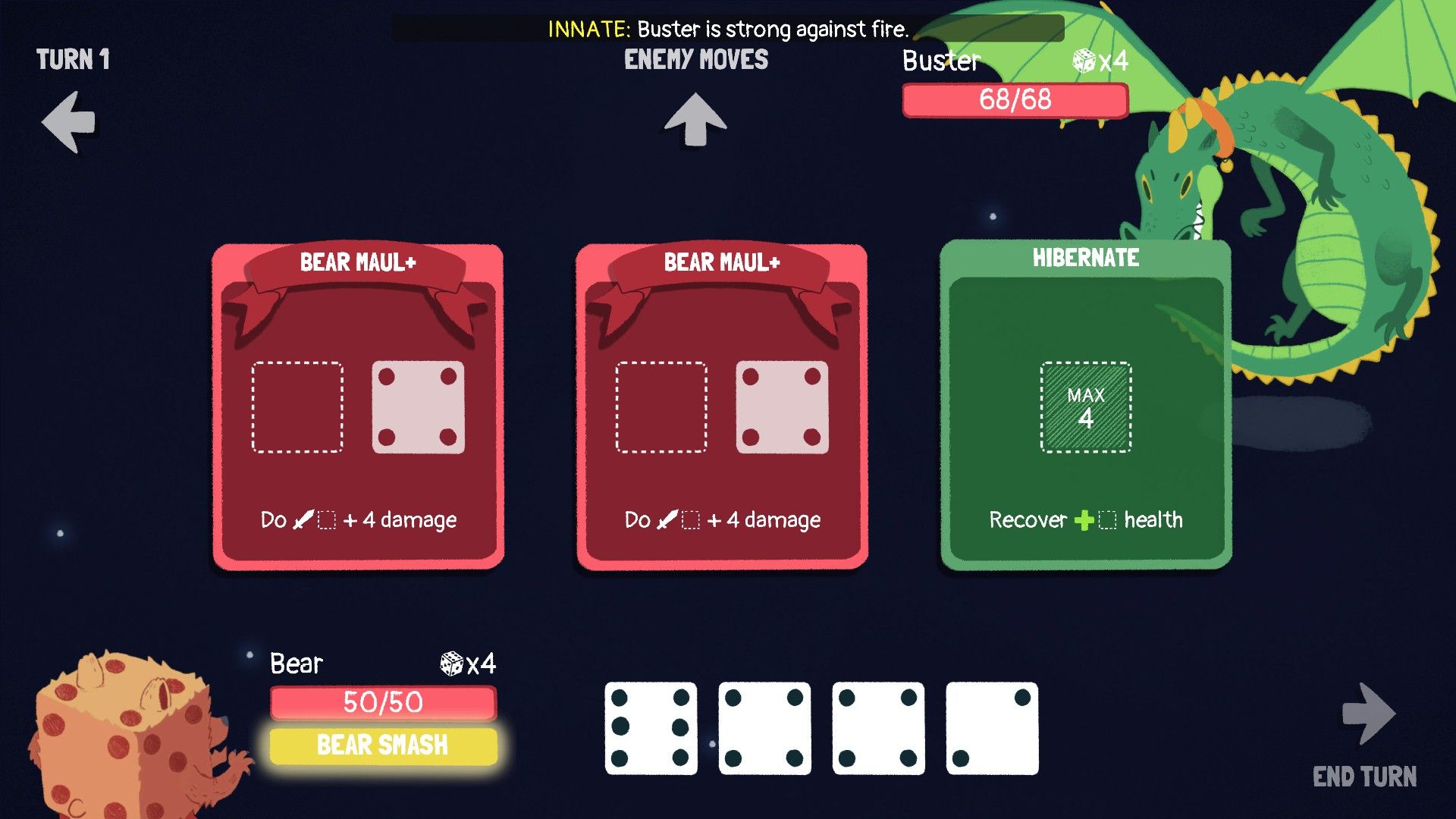 Nevertheless, there are a lot of wee dice-tricks and cute shenanigans hidden in each run. Let me finish with an example of my silliest run. As a Thief, you can mimic your foes' abilities. And at one point I was fighting an alchemist lady who had a powerful finishing potion which would turn her into a bear. No ma’am, I thought. That’s MY potion now. I stole the ability, transformed into the beast (a furry cube with claws and teeth) and sliced her up. I expected the bearish effects to wear off after the fight. But a bear I remained, and I spent the rest of the episode swiping at irksome pelicans and wizards, getting upgrades and mega health, and simply beasting through it all with high rolls, and a hibernate skill that let me heal.

It was ridiculous, and excellent. As a bear, I defeated the boss - a dragon called Buster - and unlocked another episode for the Thief. You might think Buster would be upset. But it’s okay, the adoption papers just came through and we are all one big happy, dicey family now.