"It does not matter how slowly you go," said Confucius, "so long as you do not stop adding stuff to For Honor." It's a good thing Ubisoft have always been keen followers of eastern philosophy. Despite its problems, they refused to stop working on the Vikings v Knights v Samurai brawler. We heard at E3 that the upcoming Marching Fire expansion will add four new fighters from China and a 4v4 "Breach" mode which sees players storming a castle. That isn't due out until October 16 but Ubi have announced they're having an "open test". PC players will be able to impale each other with the new characters for free (plus breach some castle walls) from September 6-10. That includes folks who don't already own the game.

I mean, they have free weekends all the time, but still, this lets you get lacerated by the new kids. The test will only let you fight in Duel and Breach modes. But it'll also let you tinker with character perks, say Ubi, which will be replacing the stat boosts you get from wearing gear. Characters will also strike up bants with each other through "short dialogues based on their personalities and the context of in-game situations." On top of that, the victory screen will feature the winning team striking victory poses. It's all default "look at me" stuff for now, but in the final release of the expansion you'll be able to earn and equip different poses. All these changes might sound familiar to players of a certain hero shooter. "If you would seek to divine the future," said Confucius, "study Overwatch."

You can see all the details in this infopicture. When the expansion does come out in October, it'll get you the four new characters right away. The Tiandi has a traditional Dao blade, the Shaolin monk swings a wobbly staff, the Nuxia has a "hooksword", and the Jiang Jun uses a sword on the end of a stick that Wikipedia tells me is called a Guandao. Thanks, infinite bank of sometimes-reliable knowledge. You can also wait four weeks after the expansion comes out, though, at which point the new characters are "out" for all players. But this method means you'll have to buy each of them with a hefty amount of Steel, the in-game warbucks. Each of them costs 28,000 Steel.

The Breach mode, however, will be playable by everyone as soon as the expansion launches. At E3, I got play this castle-sieging mode as the staff-wielding Shaolin monk. He is all about poking and deflecting attacks, and has a deeply trollish flying kick that knocks back your enemy. I enjoyed this very much. We were defending against some barbaric geezers and they got as far as the inner courtyard. 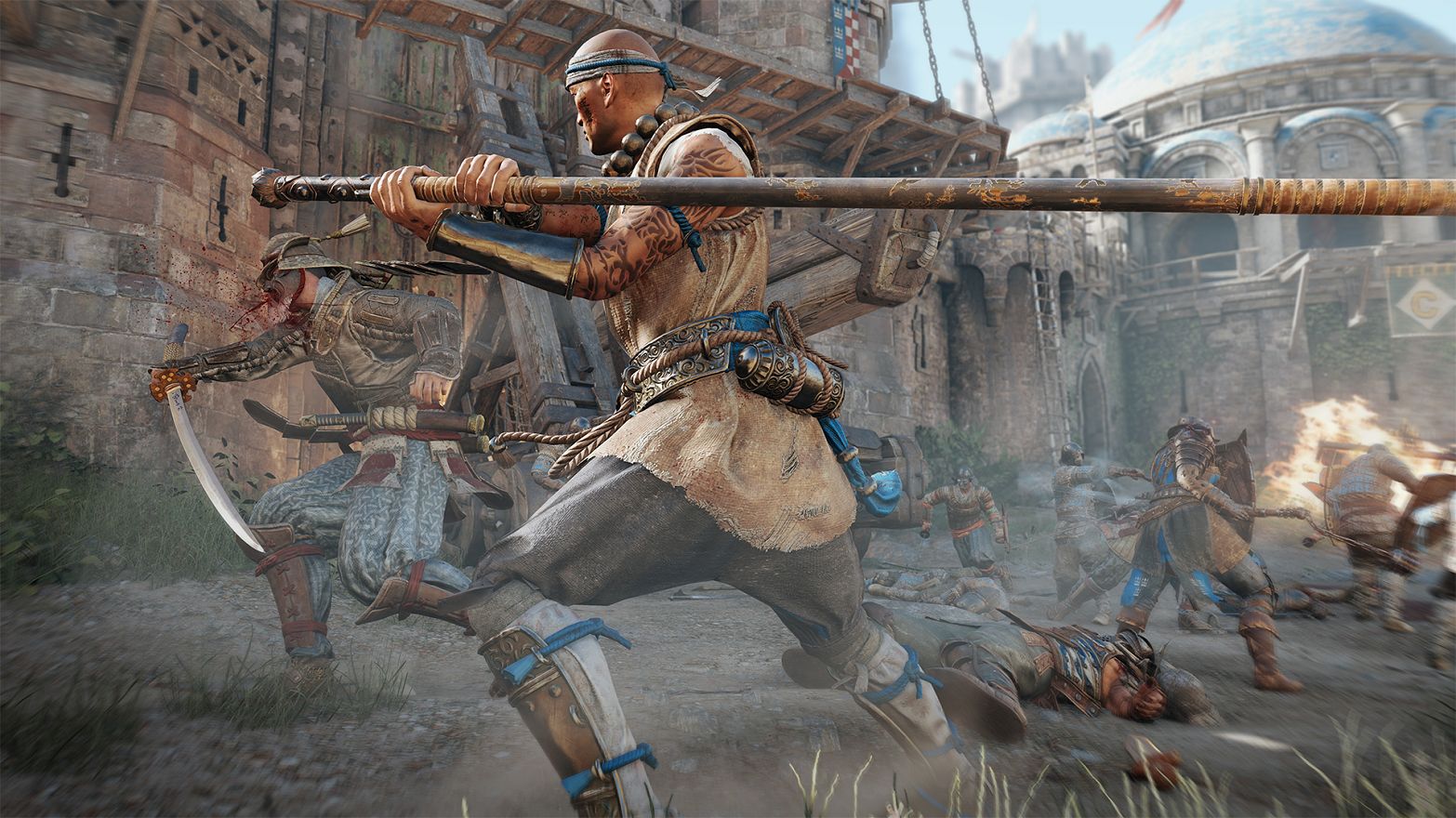 You see, the attackers have to protect a battering ram as it breaks down an outer gate, and then another inner gate. But once they have reached this innermost layer of the fortress, their ultimate goal is to defeat an NPC commander. Our foes got as far as taking swings at our commander, but we fended off the last of them before they killed the big fella, draining them of the "lives" they needed to respawn. The map is larger than I expected and has a lot of environmental toys. There was a ballista and some archers to help out the defenders, for example. At one point I dropped on the head of an enemy from a zipline. It was fun to murder people once again.

You can partake in the open test through Uplay and Steam, say Ubisoft, and all the previous characters will also be unlocked in this test, so if you still haven't tried the Scottish Highlander or Roman Centurion, you can take a punt at them too. "A wise person tries before they buy," said You-Know-Who.