How do you give gifts in Hades? Having played a fair bit of the godlike roguelite that is Hades, you may have found yourself wondering where you can get your hands on more Nectar, or even Ambrosia, Nectar's rarer and more valuable cousin. Both these resources play a large part in forming deeper relationships with the various characters of the underworld. So in this guide to gifting Ambrosia and Nectar in Hades, we'll walk you through the best methods for gaining these resources, and what to do with them once you have them.

What is Nectar used for in Hades?

Nectar in Hades is a delicacy of the Underworld, and therefore very valuable to most of its inhabitants. The initial and most powerful use for Nectar is to gift it to a character. The first time you gift a character Nectar, they will give you a Keepsake in return. Keepsakes are very powerful items you can take with you on your escape attempts, and you can learn much more about them by reading our Hades Keepsakes guide.

You can continue to gift Nectar to these characters after receiving their Keepsake, in order to deepen your relationship with them. After six Nectars gifted, they will offer you a quest to complete, and after completing this quest (and gifting them some Ambrosia, which you'll learn more about below), you'll receive a special Companion as a reward.

Other uses for Nectar include trading them with the Resource Director in the House of Hades after achieving the true ending; and, if you gain the Vintage Nectar upgrade from the House Contractor, then each Nectar received during a run will also level up a random Boon, turning Nectar into a useful pickup for runs themselves. For more on the uses of Boons, be sure to check out our Hades Boons guide.

Nectar is most commonly seen as a room reward during runs. You can't increase the likelihood of Nectar appearing as a room reward, but you can supplement your Nectar income by completing certain prophecies or trading with the Wretched Broker in the House of Hades.

Certain Boons also increase your Nectar income, including Sunken Treasure, from Poseidon, which has a 10% chance of dropping Nectar; and Premium Vintage, from Dionysus, which immediately gifts you a Nectar.

Finally, fishing in Elysium is a great way of obtaining Nectar. Chlams, Charps, and Seamares are worth 1, 2, and 3 Nectar respectively. Note that no other realms of the Underworld offer bounties that can be traded for Nectar. See our Hades fishing guide for full details. 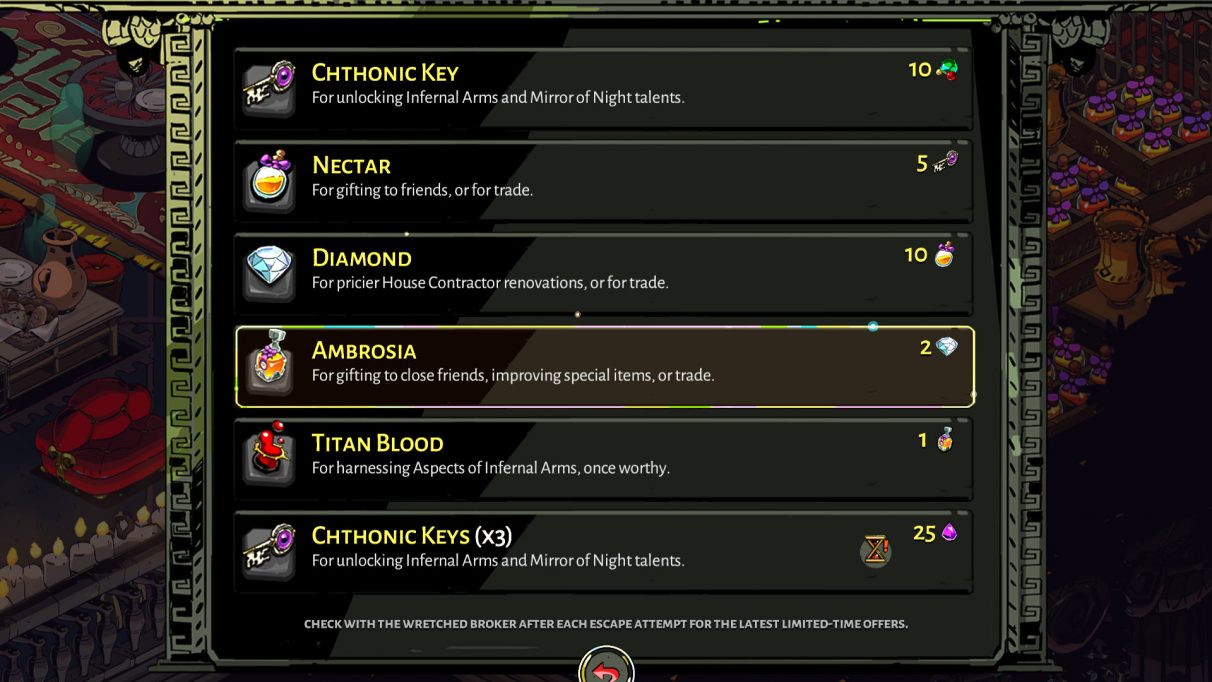 What is Ambrosia used for in Hades?

Ambrosia is part of the higher tier of resources in Hades, along with Titan Blood and Diamonds. Its primary use is, as mentioned earlier, to strengthen your relationship with characters after completing their quest. With one Ambrosia offered, you'll receive a Companion from certain characters. With certain characters, enough Ambrosia traded will give you the chance to enter into a romantic relationship with them. For more information on this, be sure to check out our Hades romance options guide.

By far the fastest way to gain Ambrosia is to earn bounties during your runs using the Pact of Punishment. If you're unfamiliar with the Pact of Punishment, it appears after you beat the game for the first time, and offers you lots of different ways to make your next run harder. Each time you "turn up the heat" to an unprecedented level with your current weapon, you'll be offered a new set of bounty rewards for completing each realm. One of these bounty rewards is Ambrosia.

Aside from this, you can gain quite a lot of Ambrosia by completing various prophecies throughout your runs, and you can also trade them for Diamonds at the Wretched Broker. Finally, there is one fishing reward which can be exchanged for Ambrosia - the Bass, obtainable only on the surface (i.e. the setting of the final boss fight).

And there you have it! You should now be well-equipped to start deepening your relationships with all the named inhabitants of the House of Hades. Next, why not take a look at our guide on the best Hades weapons to use?