It’s grim up north, and only partly because I’m being shot at by a gang of robots.

The Polar Regions — a new and free campaign for first-person shooter The Signal from Tölva — is so named because it’s set in a chilly and inhospitable wasteland, home to rusting hulks of machinery, non-Euclidean bunkers, as well as those aforementioned robots. They’re not all trying to shoot at me, to be fair, but enough of them are that’s causing me problems. I’m back on the quietly spooky planet of Tölva for a second adventure, although it’s not so much “back” — the Polar Regions campaign technically takes place six months before the events of the main game, and sets up the original Tölva storyline with some light investigation work.

The location has changed, but the machinery of the game remains the same. Players hijack unwilling robots down on Tölva’s surface, allowing them to potter around on the planet and fill its mechanical denizens full of laser lead without actually putting their own boots on the ground at any point. That’s if the unseen robo-conteoller even has boots, or shoes, or even feet in general. As in the main game, the new campaign keeps its story cards close to its chest (if it even has a chest), hinting at the origin of the mysterious and titular (if it even has a (No - ed)) signal. 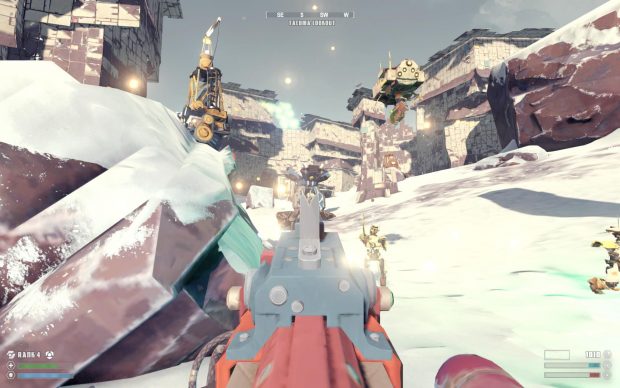 That story is told via text snippets obtained from scanning alien engines, floating dodecahedrons, and other weird and inanimate objects. It’s certainly lo-fi and portentous in tone, in keeping with Tölva’s general aesthetic, but it’s even vaguer than the main game, and — being a prequel — lacks the original campaign’s creeping reveal.

It’s frustrating to have to wait until bunkers to read these plot points, too. These structures are placed far enough apart that while I could warp to one at any point, my robot’s ponderous pace and the amount of high-level badbots on the horizon meant I was loathe to go out of my way to read a few lines of text. Instead, I ended up catching up on the story in inconsistent bursts, globs of text appearing on the terminal without any context as to where I’d picked the information up, or how it related to the wider story.

That wider story is detailed best in the Signal from Tölva’s lore book, available outside the game in PDF form. It describes an engaging post-human universe, where us meatbags are reduced to organic curios at best, and vermin worthy of extinction at worst. Unfortunately the deep schisms between the robotic factions don’t come across strongly in the game itself. The deeply religious Zealots and the diligent Surveyors may disagree violently on their philosophies, but in practice the only functional difference between the robot flavours are the colour of their blinking eyes: red for bad, yellow for good. 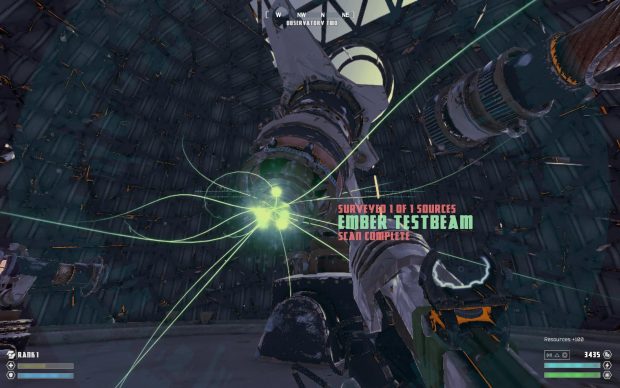 Encounter one of the red-eye variants, and you’re in for a scrap. In map form, the Polar Regions looks like an open world, but as in the original campaign, I was actually funnelled along a set path. Enemy-held bunkers and respawn nodes dotted this path, meaning that if I wanted to scan the artefacts necessary for plot development and avoid a 15-minute trudge back on death, I had to engage in gunfights.

Fortunately, Tölva’s shooting remains one of its better bits. Guns have serious heft, and pulling the trigger feels like a weighty decision, both in terms of what it does to your reticule and the robots around you. The game’s assault rifles, in particular, feel heavy in the hand and strike a pleasing balance between accuracy on first burst and wild spray should you hold the trigger down. Unfortunately that kinetic power isn’t transferred to your targets. The spikes of light that come whizzing out of your assault rifle, sniper rifle, or laser cannon look pretty, but it’s hard to tell whether they’re actually connecting with enemy robots until they decide to explode, the “hit” text that appears on some scopes serving as a poor substitute for better feedback.

A little tired of identikit battles with the same weapons, I tried Tölva’s “Phreaker” instead. The device looks like a handheld laser pistol, but its beams don’t cause direct damage, instead allowing on-the-field hacking to turn neutral robots into willing allies. At first I was underwhelmed, my charges getting killed a few seconds into any serious late-game conflict. But I learned to use my new friends more as distraction and harrying tools than serious damage dealers, and used my own sniper rifle to put down the killing blow after friendly robots removed enemy shields. 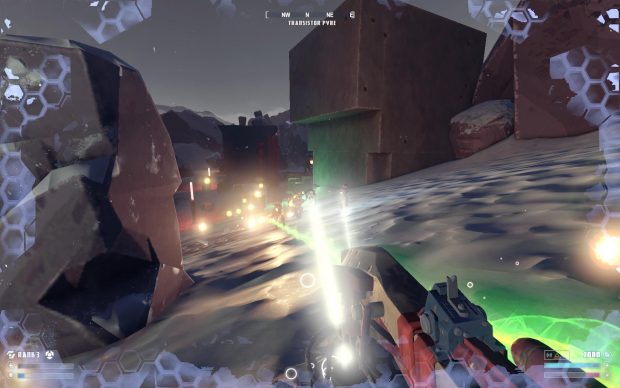 There are tactics to be employed in Tölva’s combat, players able to customise area-of-effect attacks as well as their own weapon loadout, but for me the final stages of the Polar campaign tipped over at the last second from enjoyable challenge to unfun slog. The last few battles pit players against groups of top-tier zealots that — thanks to their shields and their lack of hit reaction — felt like bullet sponges. It became less efficient to use cover and plan my shots than it did to simply unload a clip into an opponent and abuse the ability to hijack another metal body a few moments later, kicking me into a tiresome cycle of wasting as many automatons as I could before they invariably shot me to death, whereupon I’d come back to life at a not-so-nearby respawn point, waddle back into combat, and repeat the process.

The Polar Regions is a short campaign — I did everything in about four hours — but it’s not something to be blitzed through. Tölva is great at cultivating mood, with its minimalist storytelling and human-unfriendly environments, and in small bursts its world is mysterious and its combat enjoyable and grounded. The Polar Regions is a free expansion, too, making it a good excuse to go back for a taste of a subdued and bleakly pretty apocalypse, but taken as a whole, its version of the robot north is a little too grim, too grey, and too cold to want to spend too long in.

Disclosure: The Signal from Tölva is the work of Big Robot, the game development company led by RPS co-founder Jim Rossignol.