Ian Hitman is imminently to return in Hitman 3 and, like Bourne off of Bourne, he faces near insurmountable odds in his struggle against a giant secret society that controls the world. Except who cares about that, really, because with all due respect to the writers, the overarching plot of the Hitman series was never the most fun or interesting bit. Hitman is about exploring big complex levels to learn all about them, and then killing someone in a ridiculous and elaborate way, without being noticed. Possibly whilst dressed as a clown.

A preview of Hitman 3, comprising the first two levels, indicates that this is still very much the case. Although the second, an excellent level set in Dartmoor, which gave me the most fun I think I've ever had playing Hitman, has convinced me that Ian "47" Hitman missed his true calling as the detective protagonist of an Agatha Christie novel and/or ITV daytime series.

I did also play a mission in Dubai, set in a Hitman-universe version of the Burj Khalifa skyscraper. It is very shiny and you can do lots of fun Hitman-esque things like rig a giant art piece of the sun to go wrong, or, in a fun twist, disguise yourself as a different hitman, who is an assassin that is allowed to be there. And indeed, in the Dartmoor level you can do things like pretend to be a funeral director and bury a woman in the fake grave set up for her fake funeral, thus making it a real fake grave.

But that is to miss the real joy of Dartmoor. It's set in the ancestral home of the Carlisle family, a relatively small yet confusing mansion made of stone on the outside and dark wood and antlers on the inside, and in true game-within-a-game fashion, IO Interactive have just stealthed an Agatha Christie pastiche into their assassination-and-espionage game. Readers who are aware of my proclivities re. murder mystery fandom will know that this is, essentially, a level made precisely for me.

Dubai, and thank you 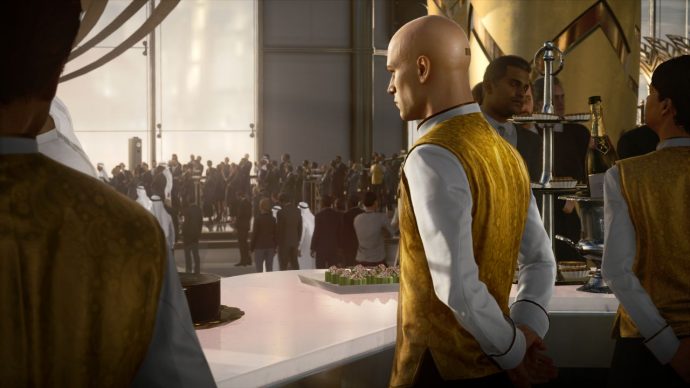 The sunshine and sleek modernity in Dubai is a nice foil to the old fashioned grim Dartmoor. Dubai is larger, and arguably offers more variety, too, with two targets to dispatch, and a lotta ways to deal with both of them. Taken as a pair, they're very-well balanced and make a stonking opener to the game.

While you are ostensibly there to murder Alexa Carlisle and steal a dossier of information from her (which involves incapaciting two other people), it turns out that someone in the manor died in the night, in an obviously fake suicide, and thus a famous London private detective has been called. As luck would have it, he arrives at exactly the same time as Ian. I do question how great a sleuth a man is if he can be lured into some bushes by having small change thrown at him, before being immediately choked out. On that basis Ian was probably the better man for the job anyway.

This pisstakey take on the established cosy mystery tropes is note-perfect. The suspects number the rest of Alexa's family: a playboy grandson, a stuffy eldest son and his annoying wife, a neurotic younger son whose ex-wife had to take out a restraining order, a youngest daughter who is kind of an amazing bitch that I love, and, of course, the butler.

The voice acting really elevates it too, with every member of the grim family being portrayed with the relish of a cast in a three hour TV movie starring Kenneth Branagh. They're almost all rendered infinitely punchable. You can listen in to their conversations and phone calls, not all of which are pertinent to the case, from mezzanine floors. The eldest son Gregory, for example, will read out snippets of the newspaper to his wife Emma, and comment on how an MP's wife totally used to fancy him. It's all constructed and written with the same care, attention to detail, and sense of humour that we've come to expect from Ian Hitman's more recent adventures.

Using Ian's camera, a tool new to Hitman 3 which can scan certain things for more intel or opportunities, you investigate the whole house and grounds as part of the crime scene, and interrogate the witnesses to find out what they saw and did the night before. You must crosscheck alibis, rifle through bedrooms, break into offices. There are twists and revelations that are perfectly in line with something that would turn up in Midsomer Murders. I love it.

Masquerading as Ian H Man, definitely a private detective, is so much fun that I disappeared into the role and forgot I was supposed to be doing a whole other thing. It's probably the most long-winded way to complete your mission in Dartmoor. If you gather enough evidence, Alexa will invite you to a private audience - yet this means you have to solve a locked room mystery first, and it took me nearly two hours.

And yet, it's also the smoothest, most hassle-free route to a killing on offer. The guards around the manor are pretty antsy, and will be well sus of you even if you're dressed as security or a servant. The famous detective can go wherever and do whatever he wants, short of cutting about with an edged weapon. It feels very much like this is the way you're meant to play the level, at least on your first go, and though there are other options for doing 'orrible murder, none are quite as detailed or inventive. We've done the burying alive thing, before, after all.

I don't begrudge IOI this at all, though, since the opening Dubai level was evidence enough that they're still creating larger, more sprawling, and more complex levels to craft your own story in. Mixed with different approaches like Dartmoor, it just gives the game more variety. In fact, Dartmoor feels more like a complete story they've crafted for us, almost a trad single player adventure, and you can practically hear the developers giggling with glee while you're going through it. It seems only fair that we let them have a bit of fun with their game too, doesn't it?

If only they'd let me do the "I've gathered you all here..." summing-up scene. That really would have been perfect.