If you click on a link and make a purchase we may receive a small commission. Read our editorial policy.
Developer: Lab Zero Games
Publisher: 505 Games

This here is a game with one of those plots. You know how it goes: our hero — a hot-headed girl called Ajna, in our case — lives in a peaceful fantasy village. One day, the forces of evil arrive, destroy everything, and kill the hero's beloved mentor figure. The hero then sets out for revenge. During their journey they unlock hidden powers, learn shocking truths about their past, discover the power of friendship, and realize their quest is tied to the fate of the entire world.

Indivisible allows you to play for a whopping six minutes before setting Ajna's village on fire. You are allowed to groan. I groaned too, at first. But Indivisible ended up growing on me, because it's a game that doesn't really want to have a complex plot. Indivisible just wants you to smash stuff.

Ajna embodies every trait of your average protagonist in shounen (anime traditionally aimed at teenage boys). She has superhuman strength, a compulsive desire to help everyone, and the intelligence of a stack of bricks. Ajna spends most of her time climbing walls, running, sliding and jumping around. She's as graceful as a sledgehammer. Sometimes she meets people and they become friends, so she absorbs them into her consciousness. Because that's what Ajna does. Don't ask me how. She doesn't quite know, either. Nevertheless, her crammed headspace can be reached with a quick meditation and acts as the game's hub, where you can chitchat with all the people you've absorbed, and upgrade things.

Between all the wall-hopping and the friend-making you'll do as Anja, you will meet monsters. Hit them, and a real-time fight will start (well, sort of real-time... I'll get to that), with up to three friends popping out of Ajna's head to take part in the brawl. Your party is mapped to your controller or keyboard, with a character assigned to each button or key. If a character has at least one action point (signified by coloured orbs above their health bar), you can smash their corresponding button to attack with them. Press the same button when a monster is targeting you to parry. 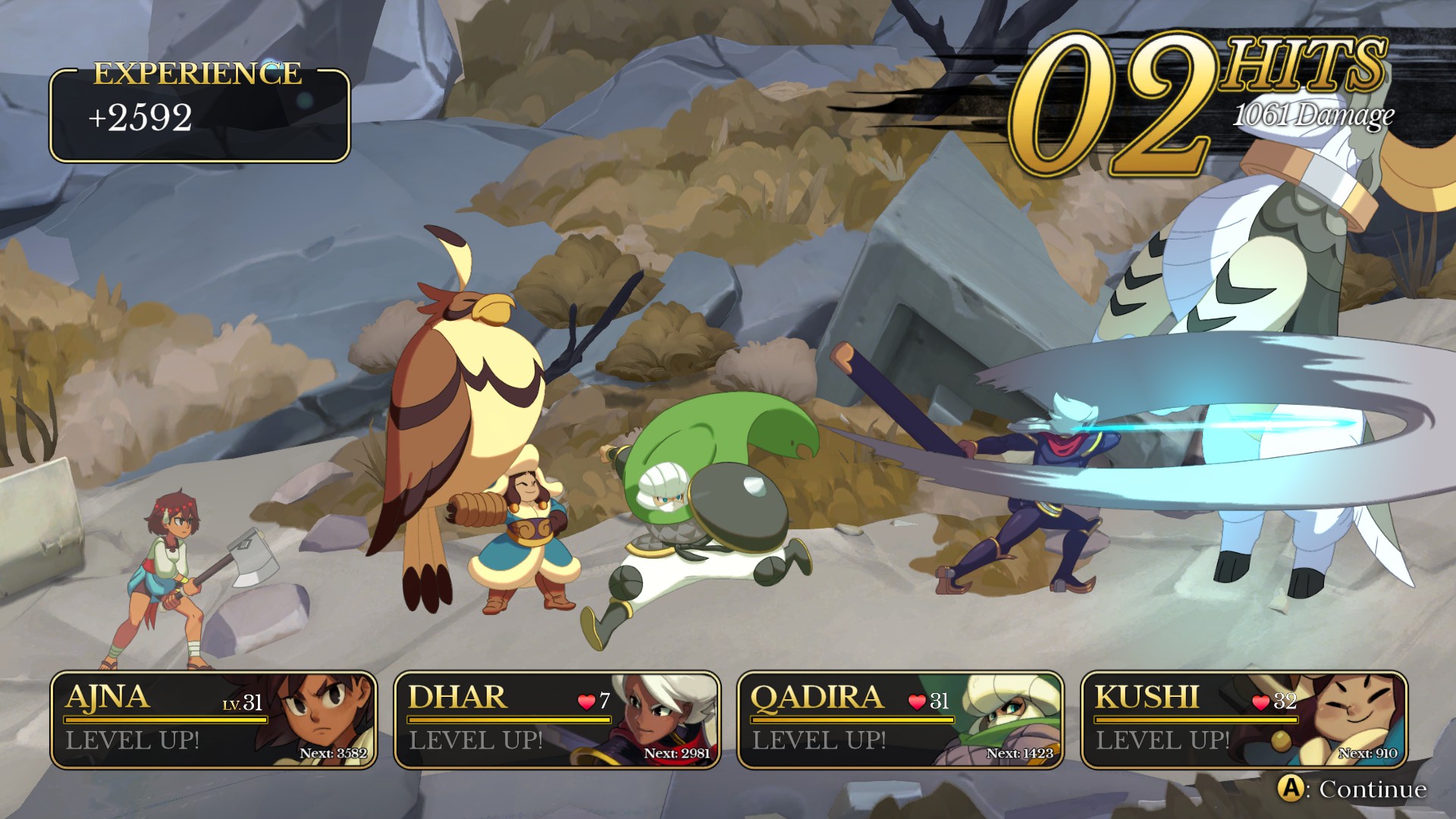 Different characters have different move sets. Sadboy soldier Dhar, for example, can use attack-plus-down to summon stones to power up his next move. Watery girl Thorani creates puddles on the floor every time she attacks, and can later activate them with attack-plus-up to heal allies and damage enemies. Some characters you meet will even teach you moves you can use outside of battles, such as the ability to hit distant switches with a bow.

Party members' powers grow in time with Ajna's, so you don't have to worry about leveling everyone up. You really should swap your party members every now and then, though, even if just to admire all their pretty animations.

I accumulated around fifteen characters during the twenty hours or so I spent playing, but I know I missed a few. They're a lively bunch, always ready to tease each other, complain about the silliness of the plot, and mock Ajna's terrible life decisions. I'm particularly fond of Razmi, a gloomy shaman with a pyromaniac steak, and scatterbrained plant-girl Nuna. Their excellently-voiced back-and-forth made me giggle multiple times. 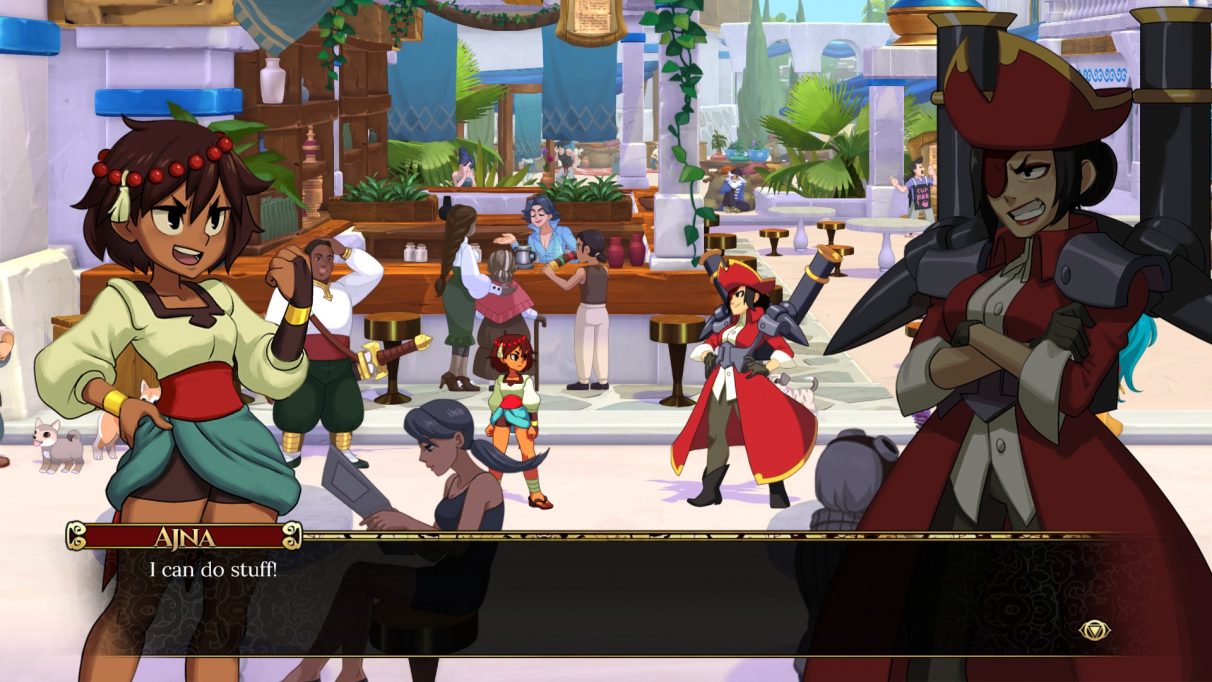 I'm glad I played the prototype version of Indivisible released during the game's crowdfunding campaign, however, because it doesn’t do a great job of explaining itself to first-timers. I never got a clear explanation about how the Iddhi (special) bar worked, for example, and had to piece the info together from other tutorial prompts.

But the most important thing the game never tells you is that the battles play out in real-time... until they don't. Honestly, I'm still confused by Indivisible's turn system, but I will do my best to explain it.

Picture the situation: I just started a battle, and I want Ajna to smash her axe on an enemy's face. I wait for her action points to charge, and then tap her assigned button to initiate the attack. At this point, time freezes. You know in a fighting game, when you start a long combo? That. In this magical realm of slow-motion coolness, action points stop recharging and enemies can't hit you back. Great. I tap other buttons to let everyone join the fray. Ajna sends the enemy flying, and my archer hits him with an arrow! Tap, tap. Then the enemy plummets to the ground, and Ajna hits it again while my plant lady heals the party! Tap, tap. Each action is a button tap, and an action point consumed.

Once I stop attacking, or everyone's action points are used up, normal time resumes. The enemies decide to reciprocate the favour, and start whacking Anja back. Anja can't retaliate until the enemies stop — but with some well-timed taps, she can parry to reduce the damage.

It's turn-based combat in disguise, where there's no strict turn order, and you can make all your party members attack during a turn.

Getting the hang of how it works requires a bit of practice. Sometimes, I wanted to attack with a special move, only to find the enemy attacking me first - I would get the timing wrong, executing a sloppy parry instead of the move I had planned, and depleting my Iddhi bar regardless. This was especially annoying during the lengthy boss battles, which alternate turn-based combat and platforming sessions. In these fights, if you screw up, you have to redo everything from the start.

When everything clicks, though, it becomes suddenly satisfying. Indivisible, at its best, is like a good JRPG, but with less menus and a lot more smashing. 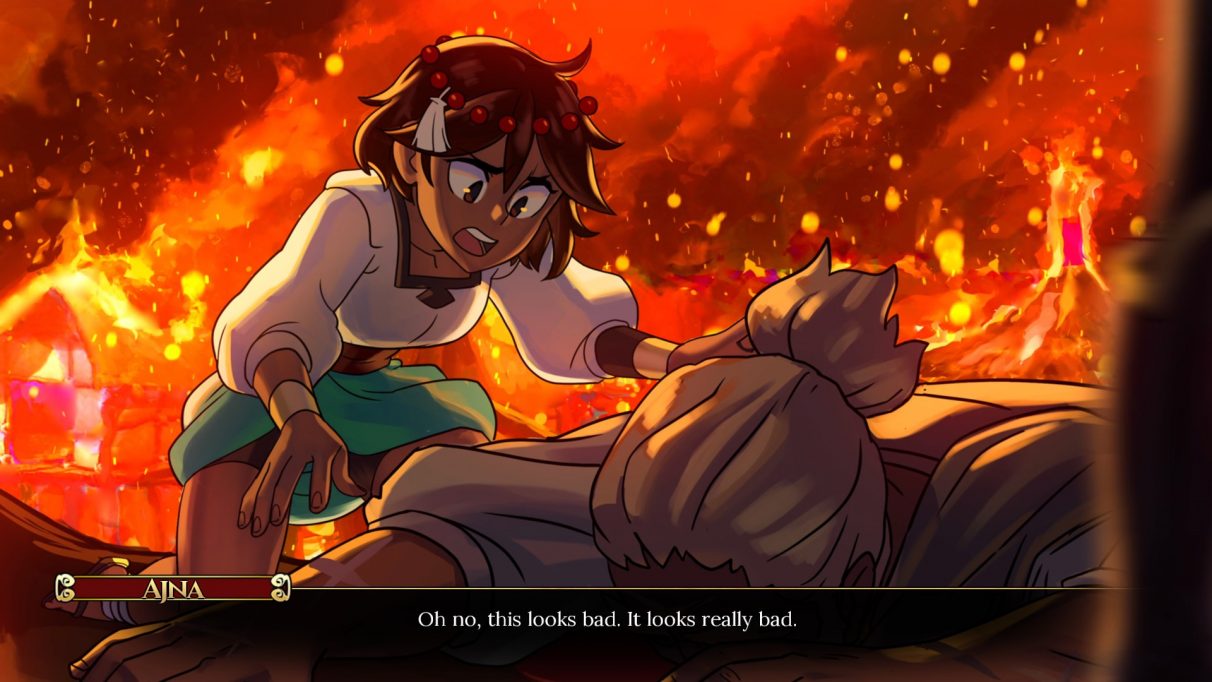 I played the game's battles the way I always play fighting games - that is, by using the characters that looked hottest and saddest. It was enough to let me survive, but I know I barely scratched the surface of the combat system. Fighting game aficionados will surely find ways to break it, timing their attacks to make their party members act in unison like a single, many-limbed abomination.

But it's not all fighting. I've always been better at jumping around than at smashing stuff, so it's lucky for me that Indivisible features plenty of jumping around, too. This is no Hollow Knight, but a certain amount of dexterity is necessary, especially if you want to collect all the shiny crystals (it's always shiny crystals) strewn around the maps.

In terms of progression, the game starts in a linear fashion, but branches after the first five hours or so, setting you free to explore the world at your own pace. And gosh, what a beautiful world it is. Indivisible steers away from your average, vaguely medieval fantasy setting, painting a colourful world inspired by Indian, Aztec and Tibetan cultures. I spent a lot of time just wandering around cities, admiring their NPCs. There are so many unique characters scattered around, and once again, their animations are all hand-drawn and exquisitely polished. 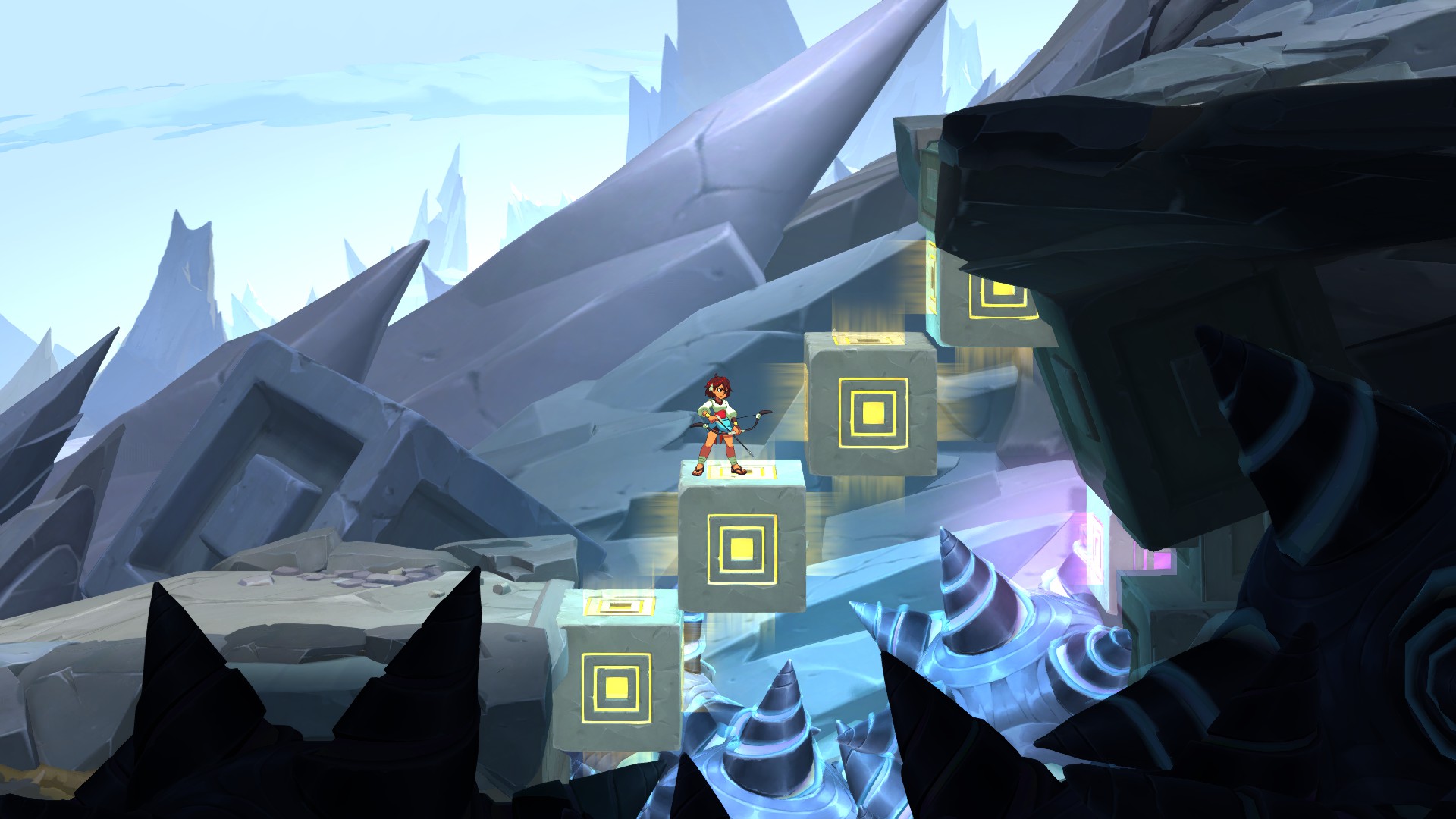 Developers Lab Zero Games might not be Japanese, but as with their previous game Skullgirls, Indivisible feels like the work of folks who religiously watched Naruto growing up, and never really stopped. It reminded me, of all games, of Disgaea and other titles by Nippon Ichi software. Cool animated opening by a well-known anime studio? Check. Lush, hand-drawn 2D sprites over 3D backgrounds? Check. A simple plot held together by a quirky cast of characters? Check. A battle system that might seem obscure at times, but that pros will gleefully tear apart? Check.

Indivisible may lack the number-crunching aspects of Disgaea, but it embodies the same sense of earnest cheer. It won't change your life, but it's a pleasant romp, extremely pretty, and clearly made with a lot of love. All good stuff.