Monster Hunter: World has a couple of crossover events, but the most ambitious puts us in the shoes of Geralt of Rivia as he hunts down the monster that transported him and a Nekker to the forest. This turns out to be the Leshen who has taken up residence in the Ancient Forest and disturbed the natural order. You'll therefore need to put it down.

Those new to hunting monsters, or if you just need to find a particular monster guide to get up to Hunter Rank 16 - needed to start this quest - should head over to our Monster Hunter World guide hub for a plethora of guides.

This guide will go over While technically a new class of monster known as a "Relict", they're normally found in the Ancient Forests of Velen and are slow-moving magic users that can turn into crows. They're based on the Slavic mythological deity of the forests, known as the Leshy, and are found only in woodland areas in order to be close to the animals. 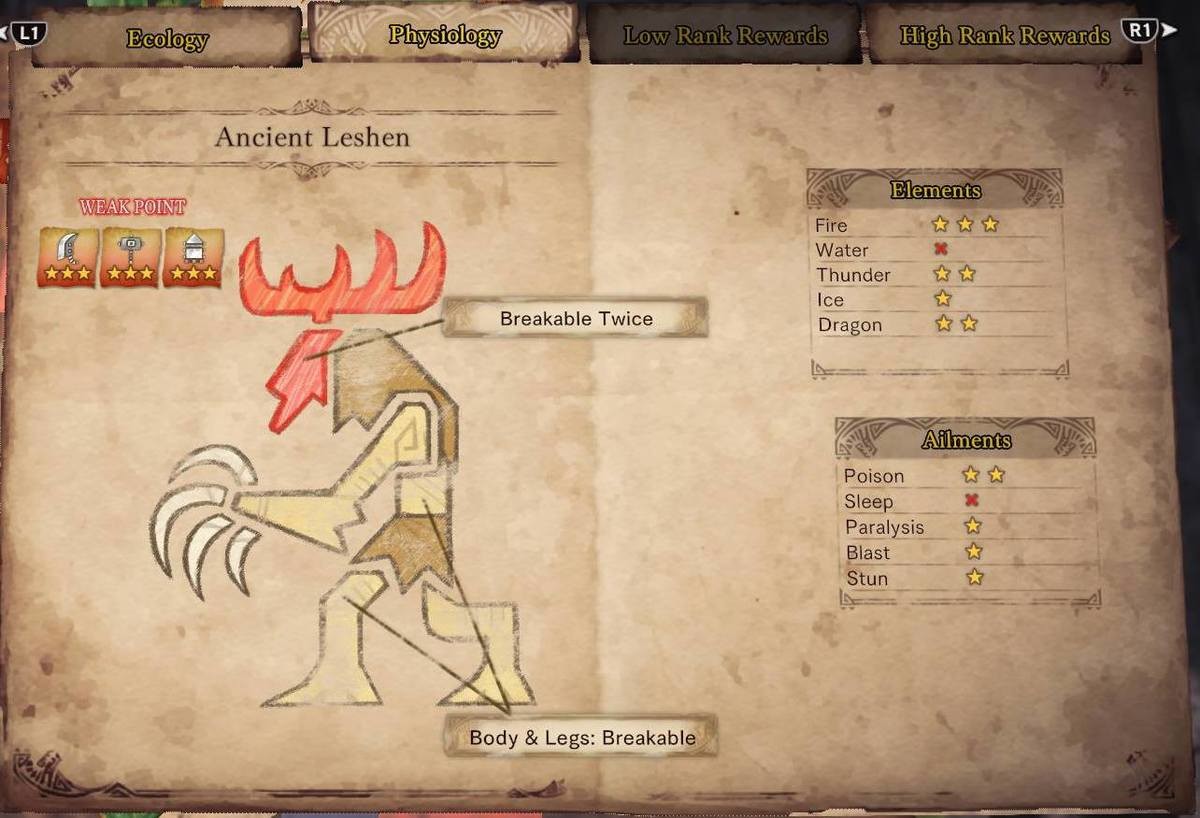 This section is for those who have already completed the quest below that leads to the Leshen. From 17th May 2019 until 30th May 2019, Hunters of Rank 50 will be able to fight a stronger version of the Leshen. This one is pretty much the same as the normal version, in that fire is the way to go and it has the same breakable parts.

The only real differences is that the Ancient Leshen has a few more resistances to ailments. Poison isn't as viable, while Paralysis and Blast are about as useful as Stun is to the regular version. So really if you want to deal the most damage you can to it, just stick to waving a stick of fire in its face. 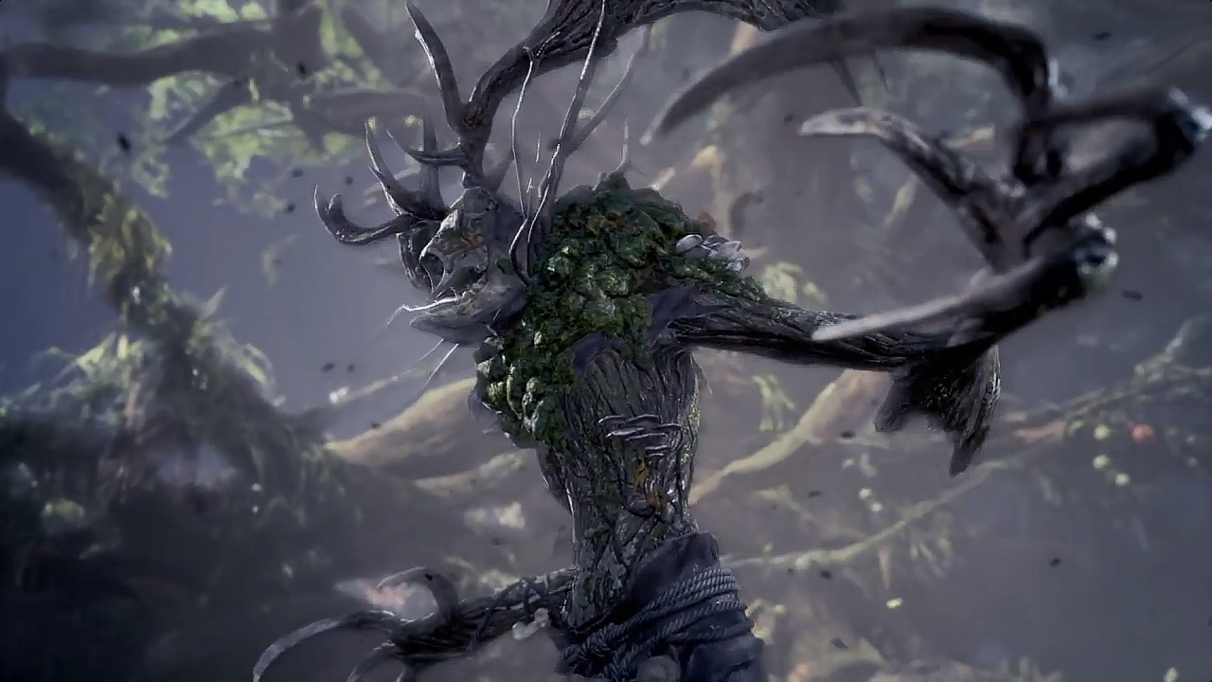 How to kill the Ancient Leshen

Comparatively speaking, the fight between the two is remarkably similar to the regular Leshen, but there are several things to consider when fighting the Ancient Leshen:

Firstly, make sure you bring health regenerative augments for your gear. You'll badly need it because of the fact that both the Revoltures and the Jagras that will arrive in the fight can chip away at your health. Since this is a fight of endurance more than anything else, you'll want to ensure you're only using health potions when you need them, rather than popping potions because some pests pecked away at you.

The other thing to definitely bring with you is Flash Pods. These can be used to interrupt some of its more devastating attacks, such as the grab or crow explosion for example. Teammates should also have an array of buffing items, like the Mega Demondrug, Mega Armorskin, Demon Powder, Hardshell Powder, and either of the two seeds.

It begins the level in area 12, so fly towards the camp in area 11 to cover a large distance. Make sure you have one of the team shoot down the boulder on top of the Ancient Leshen and its Jagras cronies. When you're fighting it, it does have largely the same moves, but it now can grab and imprison players with its roots - which can be burnt away or interrupted with the Flash Pods. The other new attack is a huge AOE attack that is akin to Teostra's explosion. Don't try to tank this, but instead either use a flash pod to interrupt it or dive to the ground as it detonates.

When you've beaten the Ancient Leshen, you'll be able to get a ton of different materials. Here are all of the items you can get in order to create some specialised Witcher 3 items for your hunter, including a Ciri costume and some new weapons. 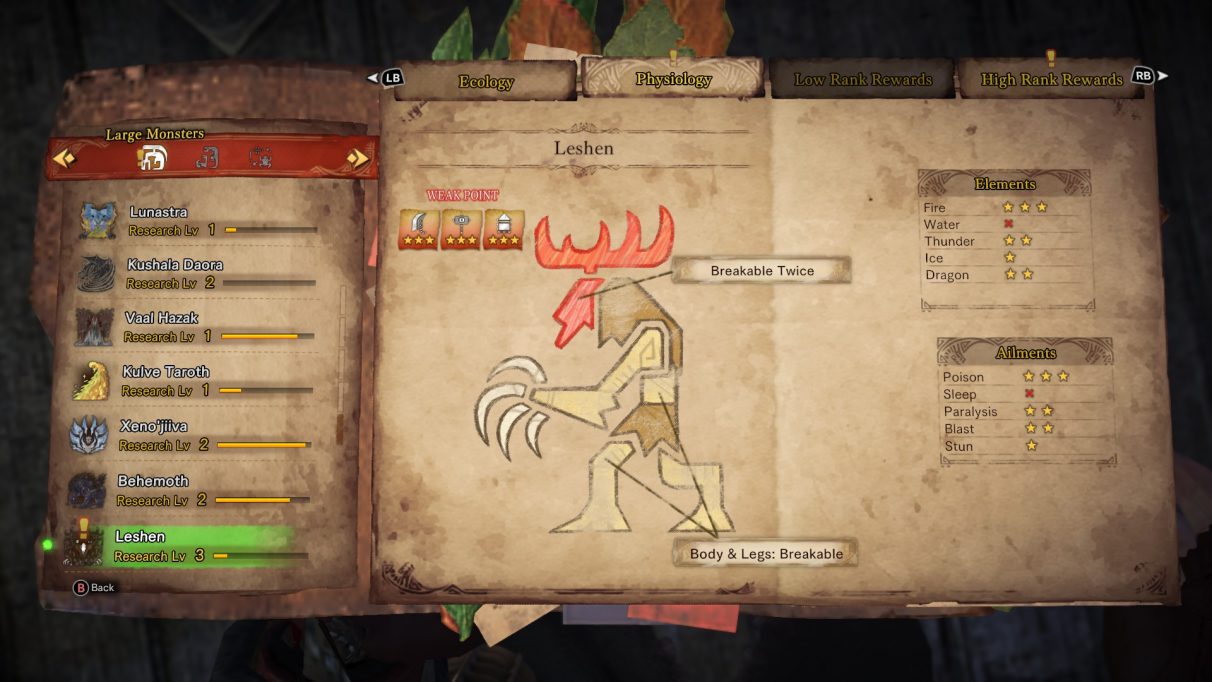 As any Witcher knows, fire is by far the best thing to use against the Leshen. It not only deals a lot of damage, but if you use the Igni magic against it, it will stagger it for a short time, dispersing some of the Revoltures around it or burn away any of the roots it has set up to defend itself against you. Water and Ice are the worst elements to try and use against it, while thunder and dragon deal decent damage, but realistically you should by now have a fire weapon to reliably hit it with.

As for the ailments, it's much the same breakdown, only poison is the optimal element of choice. It's susceptible to paralysis, though I never quite got blast to work against it. The ones to avoid entirely are sleep, which will do nothing, and stun, which is just not worth it when paralysis works a little better.

Luckily, its head is the weak point for all weapons and it can be broken twice for different rewards. Body and leg shots will eventually break them, but realistically you'll want to go for the head as much as possible. 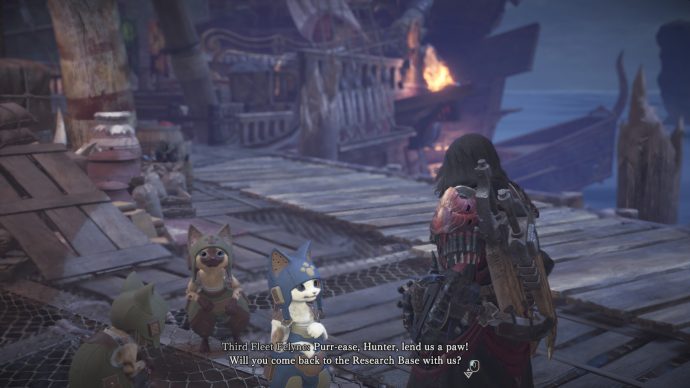 How to find the Leshen quest in Monster Hunter: World

First of all, you need to be of Hunter Rank 16 or above to complete the quest. This means you have at the very least completed the main story by defeating Xeno'jiiva and saving the new world. If you're struggling with this baby Elder Dragon, head to our Monster Hunter: World Xeno'jiiva guide to learn more about how to defeat it. Once done, talk to the cats standing nearby at Astera, or just go straight to the Research Base to talk to the person at with the exclamation point. This will eventually lead to Geralt of Rivia being summoned. Agree to begin the mission "Contract: Trouble in the Ancient Forest". 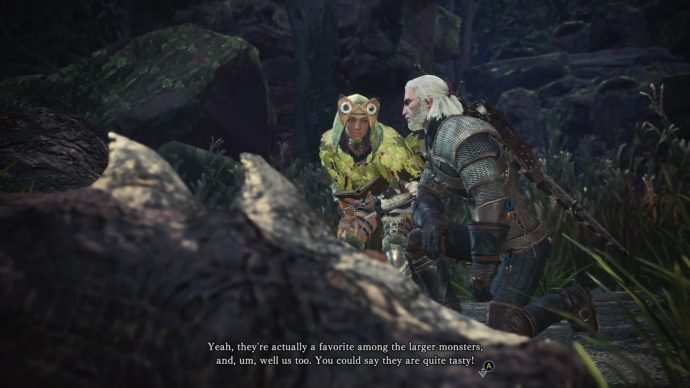 Contract: Trouble in the Ancient Forest

You need to complete a couple of in-mission quests before you can find the Leshen. The first mission will be to talk to a nearby researcher. After exhausting the dialogue options, head forward until you find some feathers. Follow the trail and you'll find another dead Aptonoth surrounded by Revoltures. Quickly run in and use Igni to disperse them without a fight. This will complete the first part of the contract.

The second can be found if you head towards the north-east of the map. Examine the book highlighted and follow the trail, up to a second book, then to examine some roots, before finally arriving at the researcher. After talking to him, use Igni to free him from his bonds. Talk to him some more to get more information to complete the quest. If you've completed both quests, head to the new red way point on the map in area 12 to be ambushed by Jagras. They're a little stronger than usual, but shouldn't be a problem. Once beaten, interact with the totem to burn it down and begin the hunt for real. 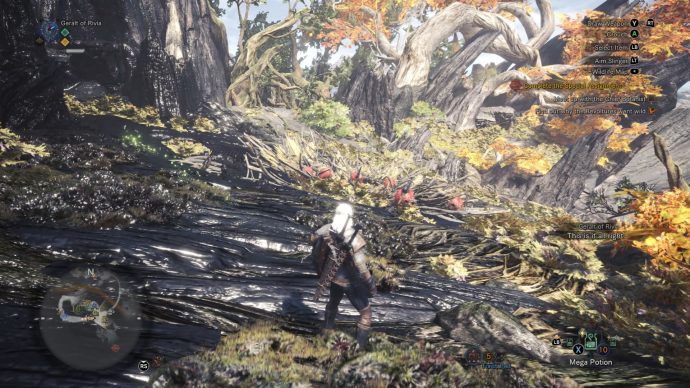 This event also has some side quests to complete before you finish the hunt. You'll need to finish all of them to get the true ending for this particular quest. 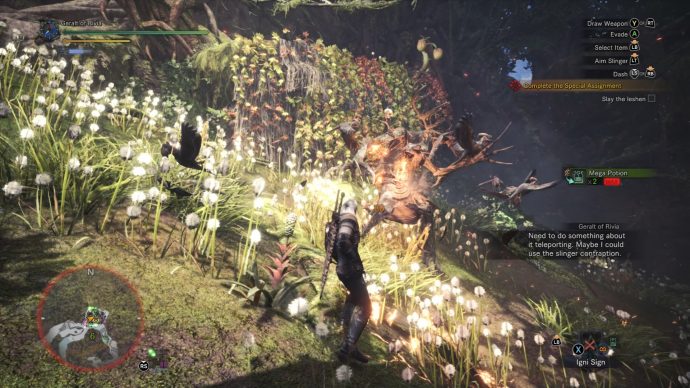 How do I kill the Leshen?

Want some advice Hunter? Geralt of Rivia's sword is no match for some of the gear that you've been building up and chances are that you're probably using a weapon set that isn't just a straight up sword and shield. Therefore it's recommended that you swap out Geralt's gear one of the weapon sets via the people near the camps. Leshen is surprisingly susceptible to the Dual Blades being used straight after the whole Igni fire attack, but it's also very vulnerable to any attacks that take a long time to charge up in that state.

Leshen has a number of attacks it can yield. It can summon Revoltures to surround it, meaning getting in close to dish out damage could be a slightly painful experience. Use Igni to burn them away when possible. The Revoltures can be send outwards in a wave for moderate damage, so look for when its arm is outstretched.

Not content with just being able to summon Revoltures, it can also make the forest itself attack you, or defend against your assault. It'll telegraph this by plunging its claw into the ground, so just keep an eye on the ground for ripples. If the ripples come towards you, dive to the side to avoid the ripple, or forward to dodge the branches springing outwards to attack. If the roots encircle it, try to make your way around it, or use Igni to burn away any bothersome roots.

Another annoying thing about the Leshen is that the claws have a serrated edge to them. It can therefore inflict the Bleed status ailment. To heal this, make sure you are not locking onto the target before you press the dodge button and nothing else. This will make you crouch, which gives you a few seconds to heal Bleed and initiate some latent healing if you've not recovered fully.

The thing that will probably throw you for a loop is the Jagras it summons. Yes, these minnows are even more of a nuisance than they were when you've been fighting the Great Jagras, thanks in no small part to the fact that around three to four of them can appear at once, interrupting you whenever you try to heal. Whenever they spawn, telegraphed by the Leshen emitting a loud howl, try to ignore the Leshen unless you have Igni on hand to burn the Leshen and any nearby enemies.

Once you defeat the Leshen, you'll get the Hunter Runestone rune for your troubles and can use the Igni ability by either using the stone or the Witcher 3: Wild Hunt emote. 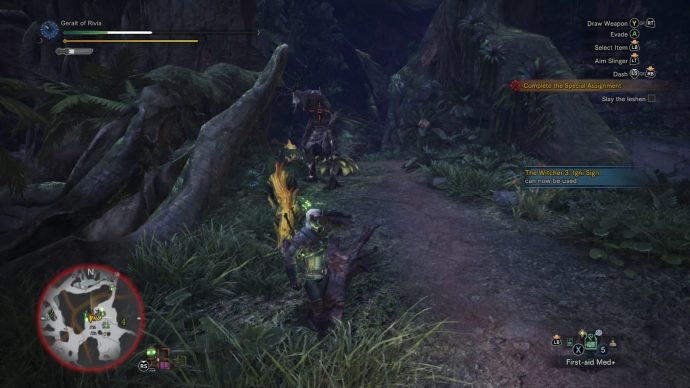 What materials can I get from Leshen?

The Leshen can't be captured, similar to an Elder Dragon. Though the standard version is only available single player, there is a nastier Ancient Leshen that will appear later on that you must connect with a few other players to survive. You can check out our Monster Hunter: World PC multiplayer guide for more information. Leshen's materials are essential for crafting any of the Witcher gear that this update brings, so you can either check out our Monster Hunter: World combat guide or our Monster Hunter: World armour guide. In the list below, the stars indicate the frequency in which the item in question will drop, as well as details on whether some items are obtained by breaking a specific part of the monster.