I always thought the Pukei-Pukei was a monster that didn't live up to its potential, but Monster Hunter World Iceborne's Coral Pukei-Pukei only served to highlight just how dangerous it could have been even further. Its tail can eject gallons of water in a jet stream. This makes the Coral Pukei-Pukei different enough to warrant needing its own strategies to defeat it. 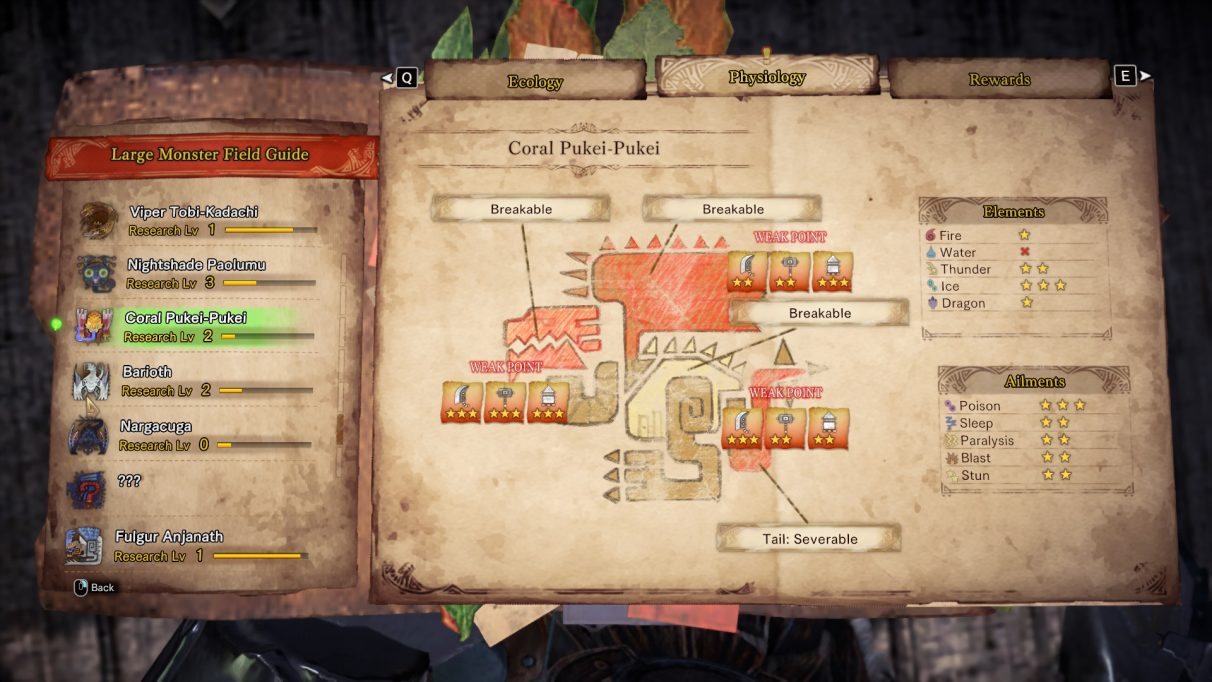 The Coral Pukei-Pukei is water-based, so naturally you'd assume that water would be a key resistance. Fire and dragon are also quite heavily resisted by the water wyvern. What I don't think anyone expected was just how vulnerable to ice attacks this monster is. It also has a weakness to poison attacks, something the regular Pukei-Pukei has defences against. Other ailments aside from the super effective poison will have moderate effectiveness.

As for the biology of the Coral Pukei-Pukei, it seems especially vulnerable to bladed weapons, particularly to the tail. Since the tail is severable, you'll want to chop it off as soon as you can. Thanks to the Clutch Claw, both the wings and head are vulnerable when its flying, so you'll be able to break them for more parts. The torso may not be a weakness, but it is breakable. 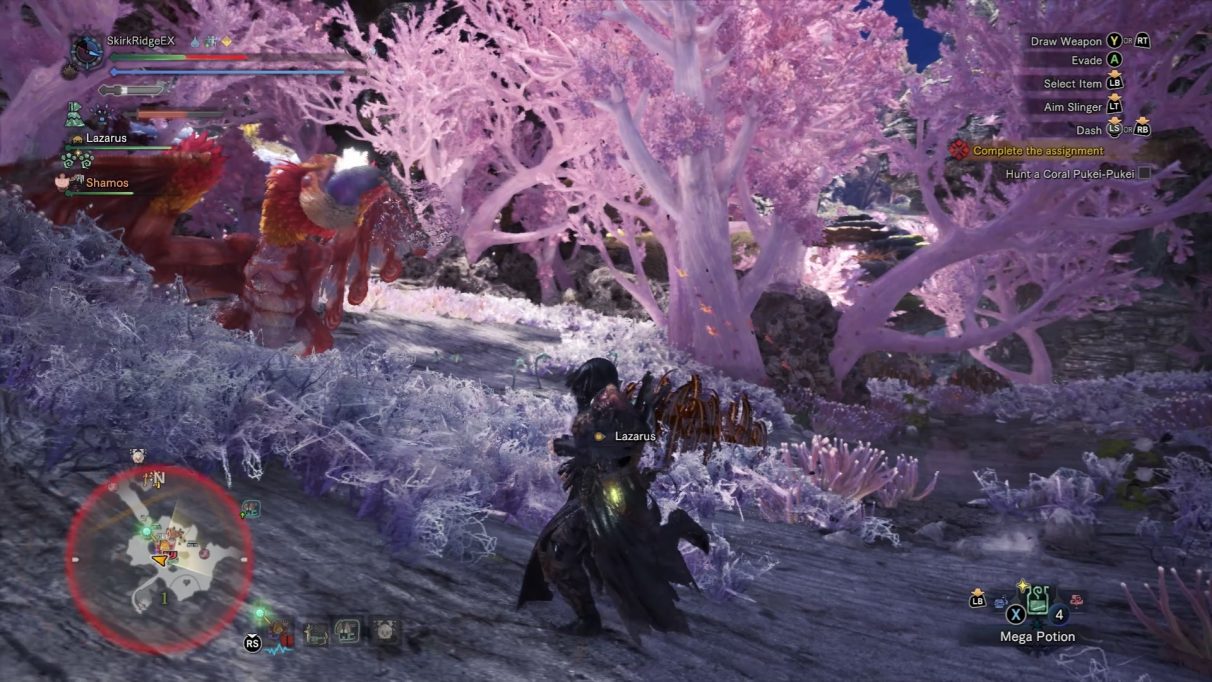 How to hunt Coral Pukei-Pukei

While it's largely the same as hunting a regular poison based Pukei-Pukei, the Coral Pukei-Pukei uses water-based jets that come from its tail and its mouth. All the water-based attacks will inflict Waterblight, thus hampering your stamina recovery. Use either water resistances, or items like Nulberry and the Cleanser Booster to cure yourself if you are hit by a water attack.

From the tail, Coral Pukei-Pukei can shoot a jet of water in various patterns. Its most common ways are in a vertical slice or a horizontal swipe, but there's one more that's prolonged. It begins by shooting the jet at the ground before beginning to swirl the jet. As it spirals around, the water jet and tail become a little more erratic. My advice here is either to back off and find cover, or expertly time a dodge past the stream and watch the tail swing around you. This latter strategy can enable you to get some free hits on the tail.

While severing its tail is the key to winning this fight as it cuts off most of its more dangerous water-based attacks, don't under-estimate the aqua jets and globs of water that come from its mouth. You can normally tell this is about to happen when the Coral Pukei-Pukei's head shakes around a little bit beforehand.

By far its most dangerous ranged attack is when it fires a jet of water, before sticking its tongue out to split the stream sideways. It's very hard to avoid this one when far away, so try to close the distance when possible. 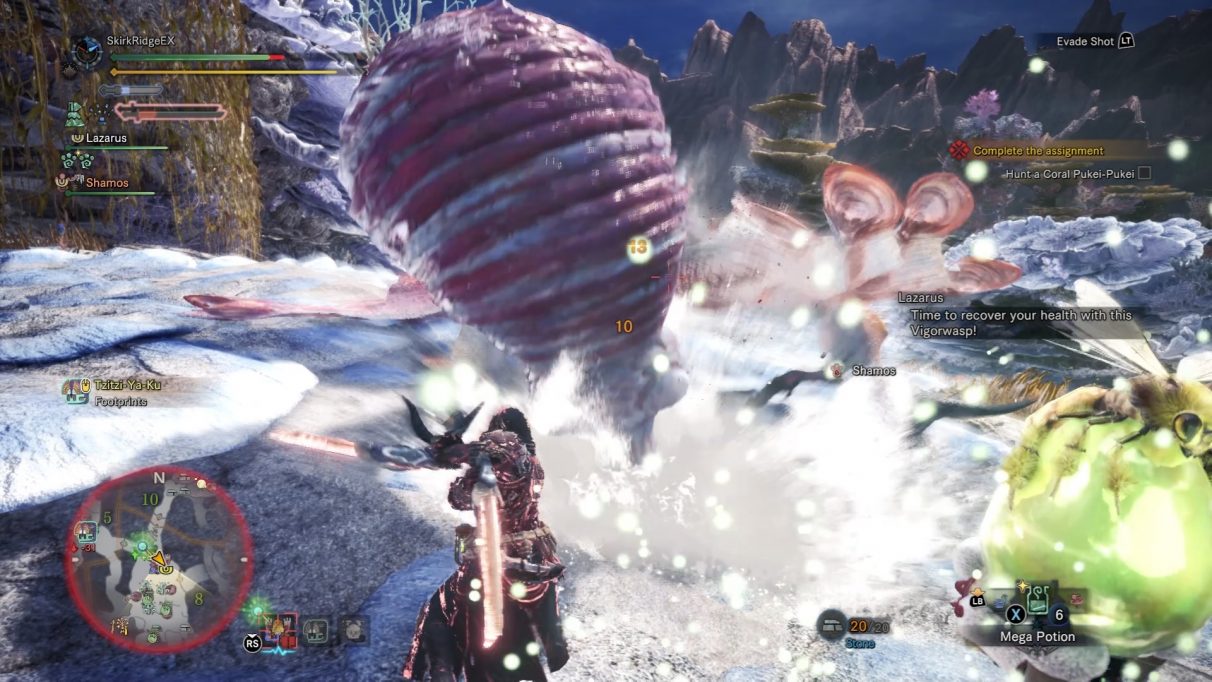 We have a whole host of other useful Monster Hunter World Iceborne guide pages for your convenience. Why not take a gander? If you want to check out the previous boss guide, head to the Banbaro guide. The game had split around here to include two more regional variants. You can find guide here for the Nightshade Paolumu. If you've beaten both of them though, the Barioth is the next main monster to defeat.