Deep within the Caverns of El Dorado in Monster Hunter: World lies the golden Elder Dragon known as Kulve Taroth. You won't be able to kill this massive beast, but you will be able to knock off all of its shards which can be crafted into all sorts of wonderfully sparkling armour. It's also the first monster that requires four groups of four warriors, which means you'll need to work together to take it down through multiple phases. This guide will go over how to fight the Kulve Taroth, as well as all the materials that can be gathered from it.

There's no doubt that this Elder Dragon will take everything you can muster. For those looking to get a bit more on how to effectively manage their stamina bar, head on over to our Monster Hunter World guide to get more tips and tricks for surviving this hunt. 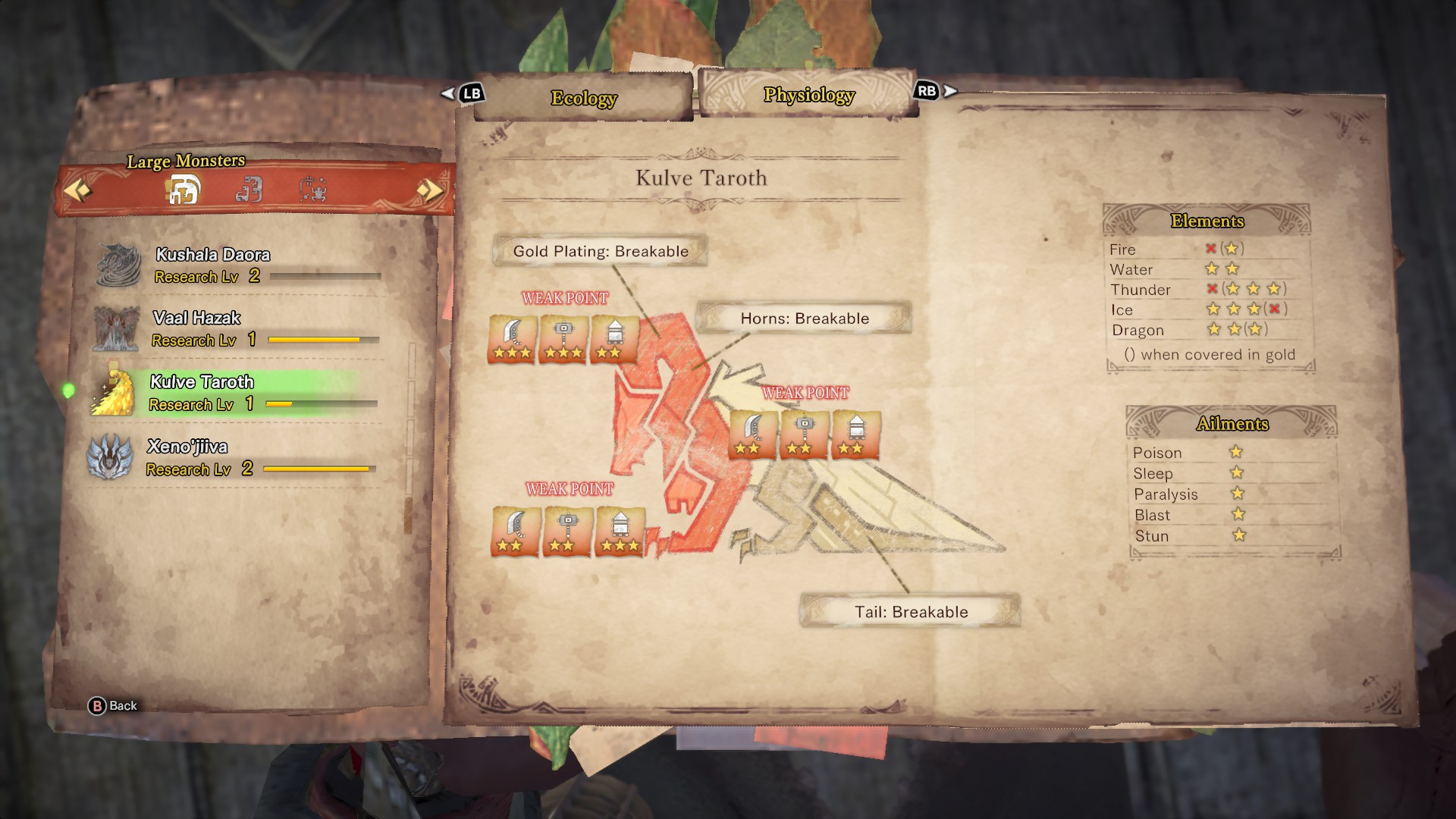 Kulve Taroth's one of those monsters that changes her strengths and weaknesses as the battle goes on. She initially begins the battle especially weak to Ice, with some degree of weakness to both water and dragon. Fire and thunder on the other hand do barely anything in this state. Upon covering herself in gold, she will change the majority of her elemental strengths and weaknesses. She becomes highly resistant to ice and gaining a bit more defence against dragon, at the cost of becoming susceptible to fire and especially weak to thunder. Water however doesn't change and is probably your safest option for fighting this monster if you don't want to head back to camp to change your weapon. With one star for all ailments, it's worth trying to inflict any of them on her, but you may find it takes a fair bit of time to actually take effect.

As for types of weapons and their effectiveness, bladed and blunt melee weapons are most effective against the gold plating on the top of her head, while ranged weapons are best fired at her front claws. Her gold plating, horns, and tail are all breakable. In addition to these strengths and weaknesses, there are two states that Kulve Taroth can be in. To begin with, the non-gold bits are where the damage should be coming from as she is otherwise armoured. When she does start to glow however, her entire body becomes a giant weak spot, meaning that you can inflict a ton of damage, especially if she becomes paralysed in this state. 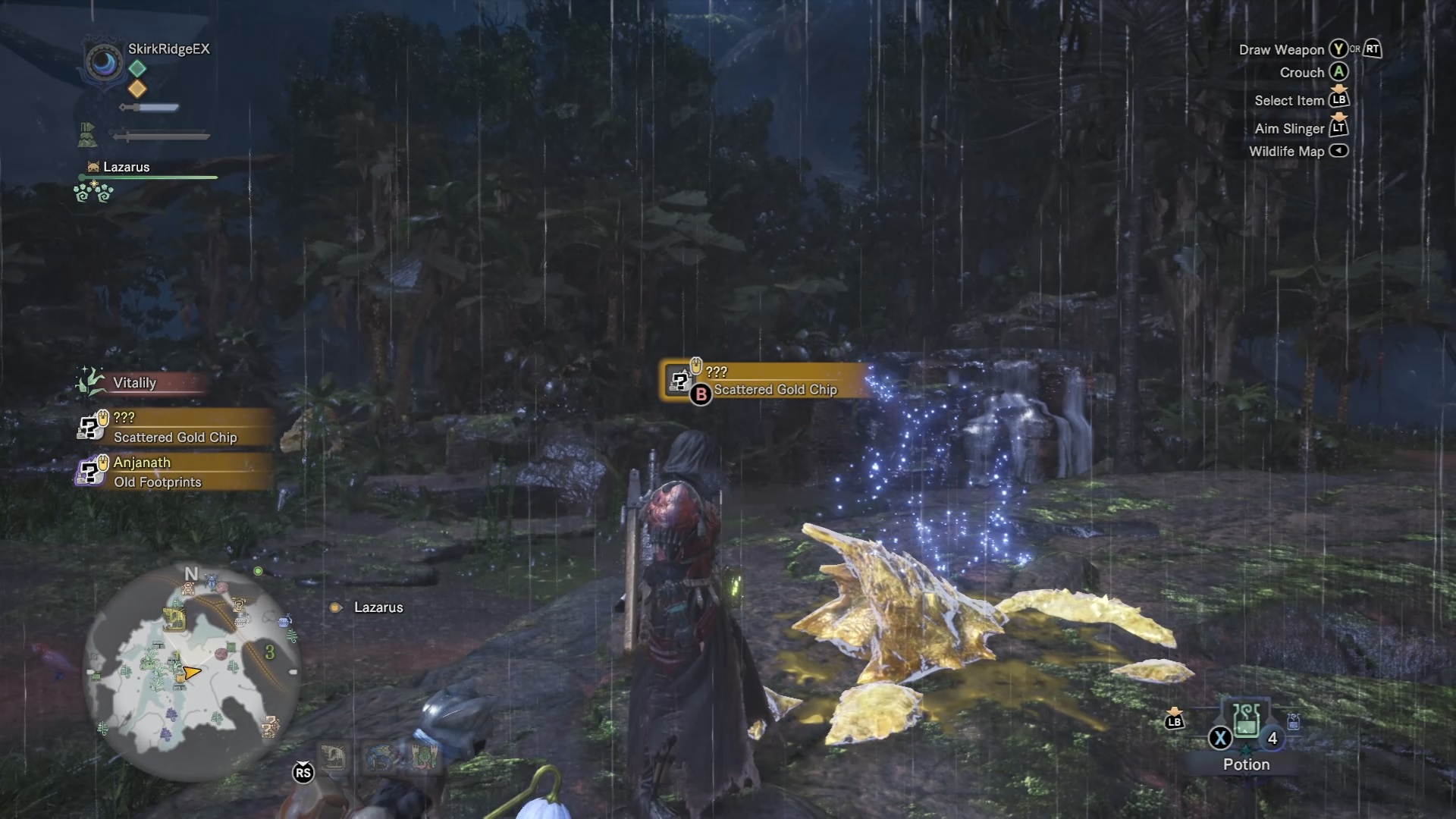 First and foremost, you'll need to reach Hunter Rank 16. This means you have at the very least completed the main story by defeating Xeno'jiiva and saving the new world. If you're struggling with this baby Elder Dragon, head to our Monster Hunter: World Xeno'jiiva guide to learn more about how to defeat it.

Once you have at least one Scattered gold chips, head back to Astera and into the Gathering Hub on the fourth floor. At the quest board, you'll see the Special Investigation entitled "Banquet in the Earthen Hall". Note that you can't accept this quest by going to the quest board in the lower floors, so make sure you're going to the right place. 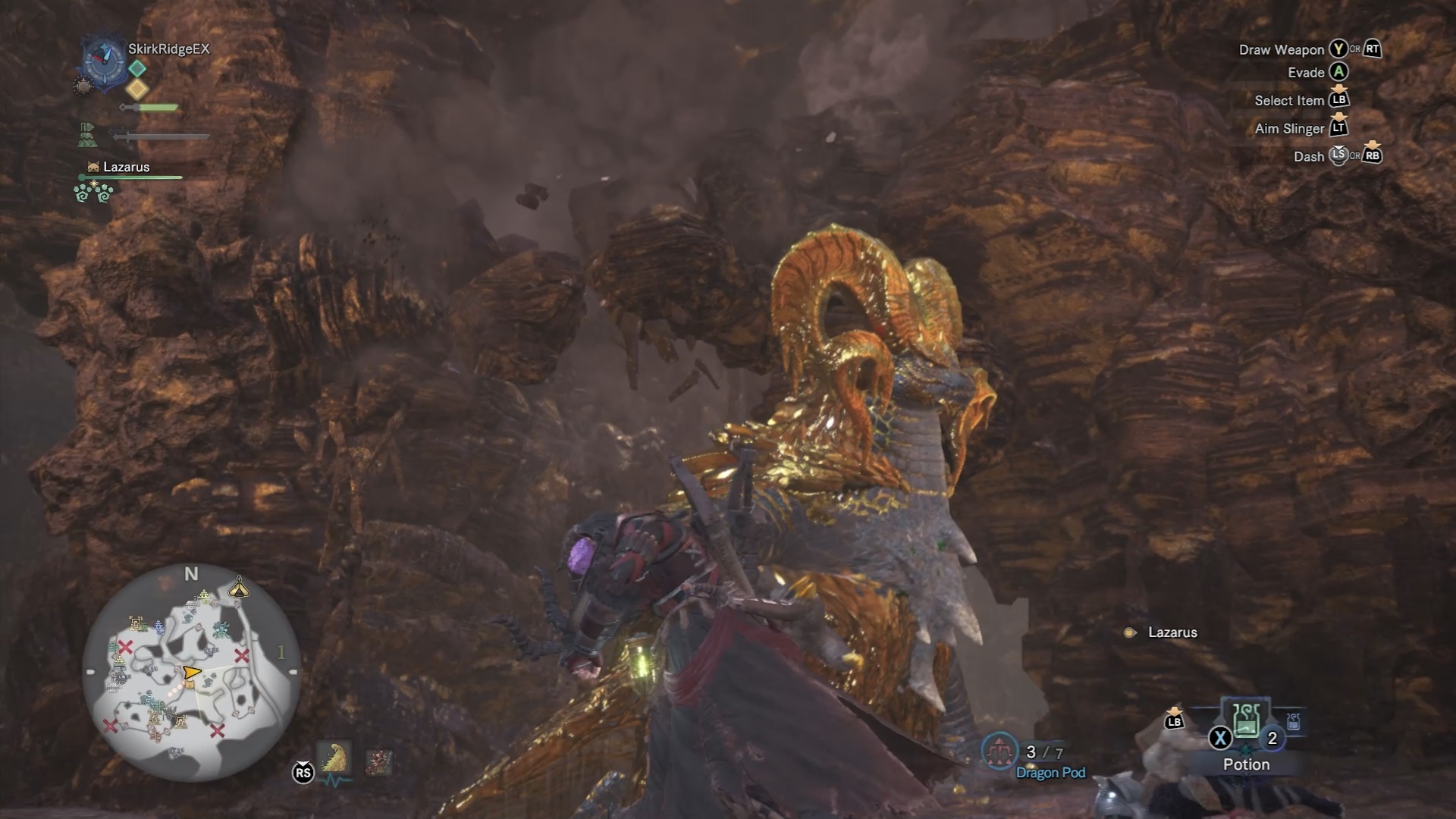 How to fight Kulve Taroth

First of all, don't do what I did to get the screenshots and just go in solo. You won't get very far at all as it needs a coordinated assault. Since there are multiple players, everyone needs to use everything in their arsenal, as well as the environment around each area, to bring her down.

The mission objective is to break Kulve Taroth's horns in their entirety. Monster Hunter: World doesn't naturally support more than four people at a time, so it uses a points based system to keep track of the sixteen player's progress. The more points all of you accumulate, the better the rewards are. Here are the points values for each of the objectives:

Coordination between each group is key in order to defeat this boss, as well as knowing each of the area layouts. She can shoot a concentrated beam of fire that begins with her mouth being on fire. This can do a lot of damage, so should be dodged to the side. She can also rise up to breath fire on the ground, which covers a large area in fireblight inflicting flames, so get out of the range as soon as you see her rise on her hind legs. Crystalburst and piercing pods can knock her out of this attack and leave her open to attacks.

Each of the three phases is distinctly different and take place across four areas. But before you do anything else, make sure you cool drinks to deal with the heat, as well as Parashrooms in your inventory. The parashrooms can be combined with throwing knives, obtained by defeating the golden Gajalakas. There's a group of them near the camp you start out in, but other small groups are around the area. There are also large barrels that are found close to the cannons in the first room, so pick those up and combine to make large barrel bombs.

In the first phase, you'll want to gather tracks and deal as much damage to hit as possible, taking advantage of the boulders above that can be dropped on top of her. This has the added advantage of knocking her prone when toppled, leaving her open to a slew of attacks. The second phase is where the golden form is introduced. Use the terrain to try to mount Kulve Taroth, as doing so will make her start to glow, allowing for everyone to get a lot of damage off on the Elder Dragon.

You'll need to break off her gold coating in the third room, so take advantage of the stalactites and bombs to tear it off. In the fourth room, you'll need to break her horns, so try to make her go to sleep and then plant any remaining bombs while she's resting. This coordinated and concentrated attack on the horns should in theory do a lot of damage and potentially break them off very quickly. Breaking them off will cause Kulve Taroth to retreat, thus ending the fight. You can't kill her, unlike other creatures in Monster Hunter: World, but the horns have a huge amount of resources.

What materials can I get from Kulve Taroth?

With any luck you and the other fifteen hunters should make a massive dent in the monster's golden armour and come away with plenty of golden horns between you all. You can learn more about the previous monster introduced in the free updates from our Monster Hunter: World Deviljho, as well as hunt one of the more elusive Elder Dragons in our Monster Hunter: World Kirin guide.