Perhaps it's a little disingenuous to describe Overwatch's latest winter mode as an Evolve-a-like, considering there's no real 'evolving' mechanic. Still, it's the comparison I expect most people will make: a team of 5 Meis must hunt down a Winston, who runs around chomping down meat until he's ready to flip the tables on his pursuers. Think Pacman, but with more costumed gorillas.

The mode's live now as part of the winter event, which also brings the usual cosmetic gubbins - including a skin that lets you dress Ana up as an Owl. Oh, and Mei's snowball fight has been brought back from last year, too.

I just played a few rounds of the Yeti Hunter mode, and despite being heavily balanced in Winston's favour it's still a Good Lark. Smart use of teamwork and Mei's abilities can give the Meis a fighting chance. I had some success lurking at the meat spawns and ambushing the Winston when he came near, and one beautiful moment where I managed to pin him into a corridor using an ice wall. He only needs to get 5 kills though, and there's normally someone being careless enough on the Mei team that that's fairly easy. The only time I saw the hunting party win was when the Winston didn't seem to know about the whole meat mechanic.

Brendan wasn't keen on Mei's snowball fight last year, but I like it - perhaps even more than the Yeti mode. You only get one shot before you have to hunt down some snow to reload, and every snowball is a one hit kill. It builds a similar kind of tension to Call of Duty's One in the Chamber mode that was last seen in Black Ops 2, where every shot is made significant due to their scarcity. Gathering up snow for another shot takes a tortuously long time and leaves you vulnerable, unless you can manage to cover yourself with an ice wall.

I like how there's juuuuust enough time between the click of someone's gun and a snowball hitting you for you to cryo-freeze yourself for temporary invulnerability - but only if you're on the ball. It means that every time I die I feel like I could have avoided it if I'd played better. I'd probably play more of the mode for its own sake, though one of the new skins turns Ana into an Owl, which for some reason has made me want to play until it drops in a loot box. I can see myself shelling out 3,000 credits on it, even though I hardly play her. 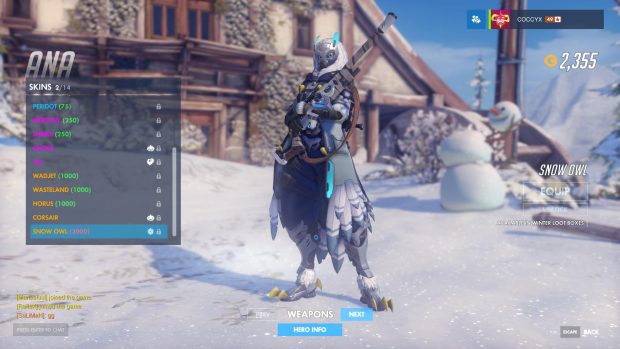 The other cosmetics include victory poses, highlight intros and emotes, as well as a new emote for Zenyatta and Orisa.

Ah. So that's where my money is going.