There is only one game I ever purchased on Desura and it was Project Zomboid, way back in 2011. This cool little indie isometric game strove to bring a Romero-esque slow zombie apocalypse to life by mixing survival skills, community management, close quarters combat, exploration, mental health, and a lot of good moaning sounds. It was a project I was backing but also getting in on the ground floor for, as I watched the developers list off exciting features they hoped to introduce, and work alongside the gaming community. Project Zomboid finally hit Steam Early Access in 2013... and it has been stuck there ever since.

But stuck isn't the right word for it. Or at least I'm hoping it isn't.

I have a terrible history with test/beta gaming. I don't have the time to get to all the finished games I want to play, so for unfinished builds or games in progress I always get excited, conceptually, and then completely forget to follow through. Perhaps because, to almost put it in dating terms, Project Zomboid was my first, I keep coming back to it. Once a year, like clockwork, it springs into my head and akin to texting a late night "You Up?", there I am reinstalling the game to see what's new with it. But also, to keep the metaphor going, I expect each year to find that Project Zomboid just isn't there anymore. The kind of title to emerge from first-wave crowdfunding support way back in the 2010s just... there aren't any survivors at this point. Any game from that time period is either finished now or it just disappeared from Steam one day and now no one can get a hold of the developers.

Project Zomboid has a thriving community, and that community isn't just celebrating a game they enjoy that's fun but stagnant. They're actively helping development, and often dealing with patches and upgrades at a speed you don't see on titles of comparable size. Part of it seems to be that fans of the game are helping test small elements individually, as you can read about in an update last week about the implementation of vehicles into the game world. Elsewhere, tweaks to animation are creating visible, interesting changes, while testing feedback is coming in on a seasonal/weather system that impacts the colors but also the functionality and effects of characters and their habitats... etc. It's a breathing, evolving world that is always getting larger while hammering out minutiae.

Point being: I know that I've been a stick-in-the-mud about games in Early Access before. More than once at RPS I've admitted that I thought The Forest had already been finished and released for years. (It's out officially today. Sorry.) I understand, technically, all the positives that come from this state but my dumb-idiot emotion brain has often been a wee bit crap at translating those positives into positivity.

So when I circled back to Project Zomboid last week and saw that it was still in Early Access, I felt a twinge of disappointment. "When does this get finished finally?" But the more I see how the community and the dev team treat this game, the more I realize that there's absolutely no reason it needs to stop being this. Sure, it'll be a "finished" game at some point, but with updates and patches and DLC there isn't even a concept of a "finished" game except what we apply that label to. Ostensibly, The Indie Stone could just call their next stable build the finished game, but I now get what a let down that would be, and how much a title like Zomboid benefits from the engagement of people working, not towards a fixed goal, but towards making a brilliant thing, collectively.

No rush. Stay in Early Access forever. Build a community there and learn to harvest crops. Maybe Early Access was the real survival horror game all along? 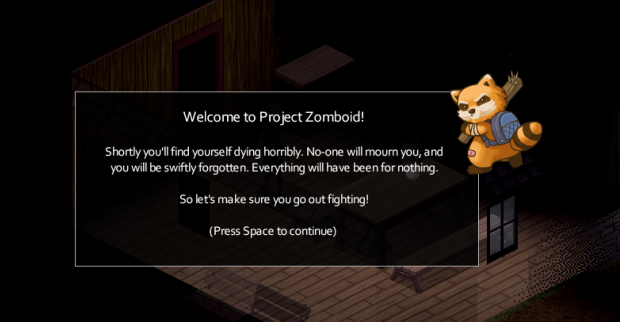 Project Zomboid is available on Steam. I wish The Indie Stone all the best on their debut title, whether it ever technically debuts or not.

Finally, please watch the Rezzed presentation from the team, after their laptops with the source code for the game were stolen in 2011. It's called "How Not To Make A Game":