So long as you didn't succumb to the temptation of the Owl's offer, your final test in Sekiro: Shadows Die Twice is none other than Isshin in his most powerful form. Armed with the second Mortal Blade, as well as a big spear and the elements, you'll have to overcome not only his grandson, but also his full three life stocks. This fight will truly test your samurai abilities, so grasp that healing gourd tightly - you'll need it.

This boss guide will go over all four phases of this final fight of the game. It's quite the marathon at four separate phases, so let's get started by meeting up with a familiar face.

How to defeat Genichiro - Way of Tomoe

Isshin's nephew - Genichiro - is back for one more scrap. This time he comes equipped with a second "Mortal Blade" which he is not afraid to use. The good news for you about this encounter is that his range of attacks are drastically diminished. Gone are the pesky lightning attacks that likely caused issues in the previous encounter, but also gone is the opportunity for damage they bring. He does have some new attacks which involve swinging his Mortal Blade a couple of times, but this is easily avoided by dodging so that you're facing behind him. Since he takes an eternity to swing the blade, you can get several hits in before he notices. 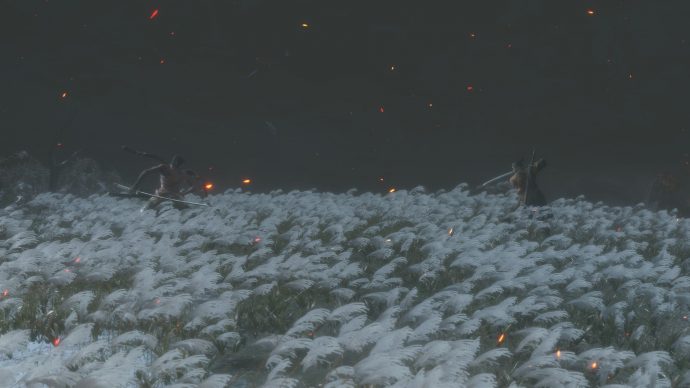 The tactics to beat him are otherwise exactly the same as they were in our Sekiro: Shadows Die Twice Genichiro Ashina guide, but note that parries are a little more effective against him this time around. He's meant to be a prelude for things to come, even if you do have to fight him again should you lose against the next boss. 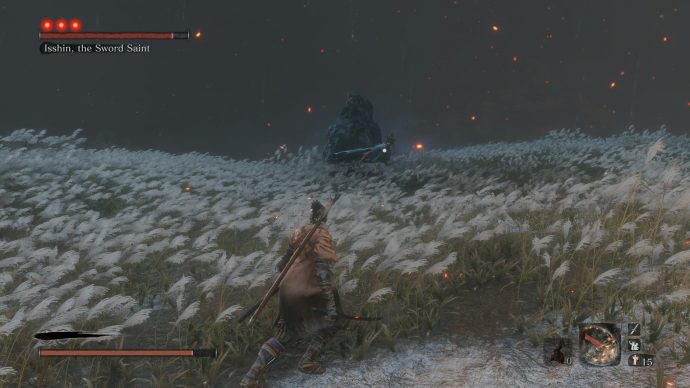 In his first stage, Isshin is just about manageable to fight fairly. A lot of the time, you'll need to bait him into attacking you, so when you're close, swing the sword once before looking to deflect whatever attacks he has to throw at you. They're mostly regular sword swings and you can learn the timing of these with ease.

There are several attacks that you can exploit. If he ever raises his sword above his head with two hands, dodge to the left and get behind him. He'll perform an overhead strike twice which can do a lot of damage to your health and posture, so it's best to avoid altogether. You'll also be able to get a few sneaky hits in while he's attacking. When he puts his sword away, don't jump yet. Wait for him to move and the unblockable symbol to appear before leaping and kicking him in the face. He can also perform a three hit combo where the second hit is a stabbing motion. The third hit is a proper thrusting attack that is able to be Miriki countered, which will give you a sizeable lead on the posture front.

One attack to watch out for is when he retreats and draws in wind. Dodge to the left or right in the last second to avoid a wave attack. This has a followup effect in the same location, so just sneak around to his back and hit him after the second wave has passed. There's also a variation on him putting his sword away where he'll grunt. Dodge to the side here as he'll perform a cross slash that you don't want to be hit by. A lot of his attacks have a long cooldown, allowing you to get a hit or two in on him. Learn the attacks and when to retaliate, before plunging your sword into his chest to begin his second phase. 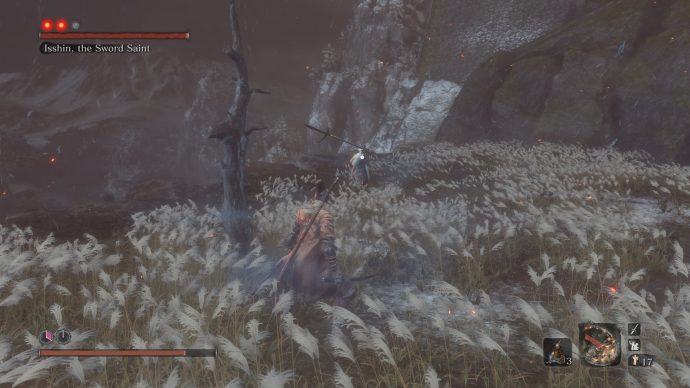 Isshin will spend a small amount of time in this phase bringing out a spear, signalling that he's no longer holding back. You can get a few sneaky hits in by running behind him after the burst of wind erupts around him and he's holding the spear aloft. Isshin's basic close-range combo begins with a sword swipe, then a very slow swipe with the spear before plunging a thrusting attack. This final move can be countered with the Miriki counter skill.

He also has a close range combo that ends with a spinning attack that uses wind or a thrust. Deflect his attacks and then run away if he crouches down as this attack does more posture damage than it's worth risking your life for. You could use firecrackers to interrupt the spinning attack, but that risk is up to you if you want to take it. The thrust can be exploited with the Miriki counter. There is also the rare chance of a sweep which can be jumped over, but it's so rare it's not worth trying to learn when it'll happen. Unblockable attacks are going to be thrusts 90% of the time.

While this phase of the fight is one of the more intense fights in the game when played straight, you can exploit one of his attacks. The idea is to stay as far away from him as possible and keep running in large circles until he performs a leaping attack. Dodge to the side, get a thrust attack of your own to hit by holding the attack button, then run away. His slam attack can be followed up with others, including a reactionary gunshot behind him, but generally it's good to hit him in the back after he comes down. If he ever fires his gun while running towards you, you can either deflect the bullets or if you're already running you can just keep going to avoid them. The gunshots are followed up with any of his longer ranged attacks like the leaping attack mentioned earlier. This does however take quite a long time to win and there are definitely more efficient ways to finish this phase, but this is by far the safest.

Despite the exploit, he can hit really hard, so make sure you're healed as much as possible as it'll help you with posture recovery. Around 75% of your health bar or more is best, but ensure you only heal when it's safe to do so. If you heal when he's not attacking, he'll run in for a sneaky hit, so avoid doing this when you can. Even deflecting some attacks can raise your posture up to unmanageable levels, so just try to keep on top of health recovery when needed. 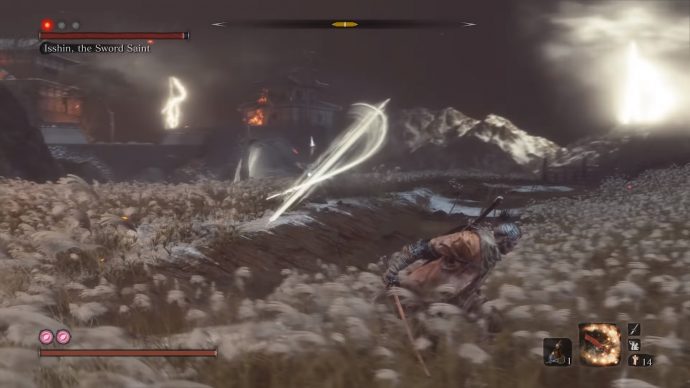 In the third phase, the weather will intensify and lightning will begin to strike the battlefield. Isshin also gets a few new attacks, including a variant on the leaping slam from before, only with lightning striking his spear beforehand. The regular slam can be followed up with a second one, in addition to the potential gunshot, but this seems to mostly happen if you're hit by the first slam. His attacks are largely the same though, so the same tricks will work against him as before.

If you're feeling gutsy, you can wait for the lightning attacks, then jump just before he swings and hammer the attack button to send lightning back at him. This will deal a big chunk of damage, but the risk is there as this will put you in Shock status and shave off most of your health if you fail to counter. Hitting him will leave him vulnerable to further attacks, so make sure you land some before he recovers. He can also send out slash waves that will need to be dodged, but being far away makes them far easier to see coming. Once you've defeated him, you'll get the memory "Saint Isshin", along with the Dragon Flash combat art. This does use spirit emblems, but it emits shockwaves as you attack. You'll also get a whopping 20,000 experience towards your skill level.