Hello fellow synthetic, would you like your breast implants in silicone or liquid nitrogen? In the world of Subserial Network, you could have either. But your real job is to hunt down troublemaking synthetics and “dispatch” them by using a retrofuturistic web browser. It’s an upcoming game from interactive fiction wizards Aether Interactive. You might remember them as the makers of Arc Symphony (the forum-lurking story of a JRPG that never existed) and Localhost (another game about deleting poor machines). This time, it’s definitely the right thing to do. Can you imagine what would happen if we didn’t eliminate these data dissidents? Your manager can. “We’ll end up just like the humans.”

It’s going to be 2-4 hours long, we’re told. And here’s the trailer, for consumption by law-abiding synths only.

I played a bit of a preview build. I’ve always enjoyed the meta-fictional cyber-scribbling of Aether’s writers, Sophia Park and Penelope Evans, and they continue to be on form in creating this whirring world and its community of internet-obsessives. Synths dwell in Geocities-style home pages, slow to load and plastered in insulting amounts of comic sans. There's also a music player of Winamp vintage floating separately from the game’s other windows – one for emails, one for web browsing – and new songs will unlock as you go along (35 minutes of original music, say the devs). Your first decision is telling. You've got to send an email of resignation to the synthetic who seems to be your superior, or to delete the draft detailing all your dissatisfaction, unsent and unseen. 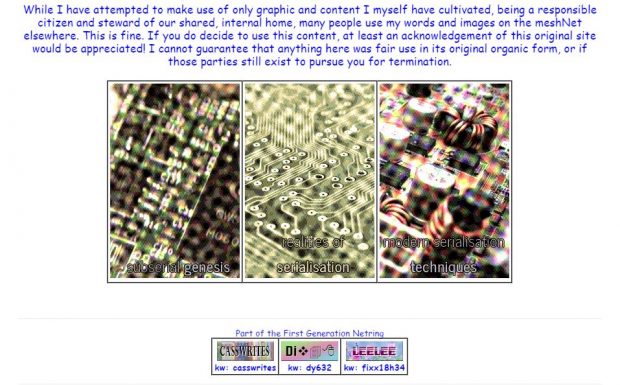 The "meshnet" is a familiar webscape, but anything happening outside the computer is harder to imagine. Humans seem to be out of the picture here, a world in which time is measured in seconds and new pelvic apparatus can be installed in bipedal, tripedal and quadrupedal flavours. But you don’t see any of that. As an informant, you simply give tips about suspicious synths you discover over the net to a governing body called CETUS, who “may, if required, forcibly recall memory through your central processor and/or storage drive in the event that your information is fraudulent.” Super.

Of course, I got sidetracked by a fansite for a synthetic TV show called Under the Steel, complete with episode listings. This indulges my secret love of TV guide descriptions. There’s even a guestbook, with one synth asking for the name of the song which plays in that one episode with Dante and Hugo escaping the flooded room. (It's PC Love Letter, duh).

Subserial Network is coming out June 1 as a Humble Original (in other words, it’s debuting in Humble’s monthly bundle for June. The same treatment was given to space station caper 2000:1 A Space Felony and puzzling animal capturer Urrnog, among others.