Ubisoft have announced The Division 2's open beta dates, which comes off the heels of the private beta that concluded recently. Though the Private Beta had its issues, they were minimal compared to other recent betas and gave us a good chance to take a look at the game before the final launch. Ubisoft have also set out to explain what features to expect on PC and the system requirements. This guide has all the details on the open beta we know, as well as the game's release date, details about the PC version, and information on each of the five editions.

The Division 2's free open beta will be happening from 1st March 2019 and last until 4th March 2019. Though the exact timings haven't been announced, I would imagine they're not too dissimilar to the timings from the private beta. The existence of the beta was leaked by a Ubisoft staff member during a live stream, clipped by Twitch user "TiniestBuckle".

During the Microsoft E3 press conference this year, it was mentioned that the release date for The Division 2 will be 15th March 2019. Ubisoft also later confirmed at their own press conference that there will be a year's worth of free DLC that adds new story details, some new locations to loot and explore, and more quests.

In the same press release as the PC features and where to buy the game, there were also listings for all the PC specifications that Ubisoft are targeting with The Division 2. Rather than just being minimum/recommended specs, they also outline requirements to get 1440p and 4K running at 60 FPS. The full list is below:

According to the video posted on Ubisoft UK's YouTube channel, the PC version will feature 4K and HDR, with support for variable refresh rate monitors, including AMD FreeSync; with the frame rate being able to be unlocked. There is also support for Eyefinity Displays, ultra-wide screen monitors and multiple monitor setups. There's also improvements to the custom HUD and Text-To-Chat features, with Ubisoft targeting as many computer rigs as physically possible. 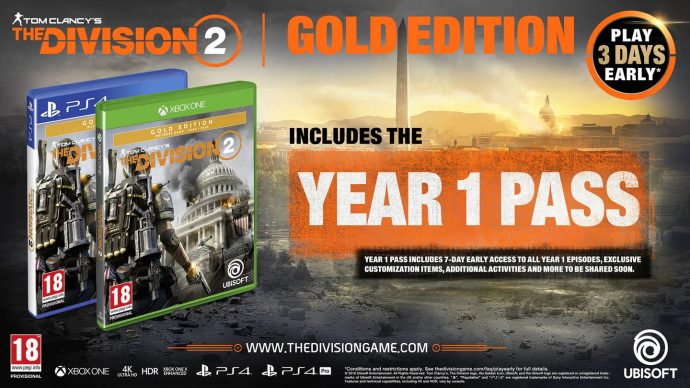 Well, it's an Ubisoft game, therefore there are far too many editions for the game to make sense of for the average consumer. There are a grand total of five different versions that you can buy from the Ubisoft Store, with the Standard, Gold, and Ultimate editions also available at the Epic Store.

The Standard edition costs £49.99, while the Gold edition sets you back £79.99, and those wanting a bit more stuff can opt for the £99.99 Ultimate Edition pack. Two super premium versions of the game are also available to purchase if you really, really want to. This includes the £94.99 "Dark zone edition" and the colossally priced "Phoenix Shield edition" that's exclusive to the Ubisoft Store and puts you £214.99 out of pocket. Below is a comprehensive list of everything that's included in each of the four special versions of the game: 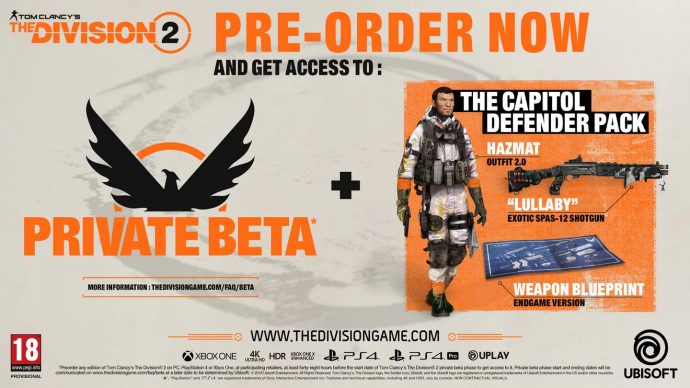 We don't recommend that you ever pre-order games because you never know what state they'll be in when they are released for general consumption, but Ubisoft have upped the ante with the preorder campaign on PC. With the PC version for all versions, you'll get the following items:

In addition, preordering the PC digital version comes with a free game on Uplay. You have a choice between the following: Ghost Recon: Wildlands, Far Cry Primal, or Watch Dogs 2. These are the standard versions of said games, and you only have until 14th March 2019 to make the preorder purchase. You will then have a few more days (31st March 2019) to choose the game  you want to redeem.

For right now, that's everything that we have, though I suspect we'll have a confirmation of times once the open beta draws nearer. There will most certainly be more details on the game when that comes, so do check back often.