When you first meet Odessa Sawyer, she's a bit despondent, saying that Agent Kelso has already left to try and rescue her daughter. She sets you the task of catching up to Kelso and aiding in the rescue of her kin. This is your first proper mission, and you'll have to face against the first tough opponent - The Saint.

Head over to the mission start location and you’ll see a text overlay nearby. This indicates the start point for the mission as a whole - including some details on the type of mission, where the mission was accepted, and the enemy level you should expect to face.

Your first objective is to locate the service entrance. From the start point, hang a right by the sign that says “Loading Bay”, as three regular goons storm out upon hearing the explosion. Take them out and head towards the Atrium, making sure to restock along the way. Head downwards until you come across a broken window with some computers. This will allow you to be in the best position to take on the next set of six enemies. This room has an explosive barrel, so time your shot carefully for maximum effectiveness.

At this point, a Hyena named “Saint” will summon troops to the Atrium. He’s essentially the boss for this level, but we’ll get to him in a bit. Head on through and up to the Atrium, where you’ll see the big lad go into a lift. Your next job is to secure the Atrium, but this won’t be easy. A turret is being manned towards the centre of the room, close to the lift, so you’ll need to hit any enemy that’s manning it before moving onto the others, otherwise it will rip through your armour. More will come in to assist the enemy in the ensuing fight, and they will try to man the turret or throw various grenade types, so keep an eye out for any problematic foes. 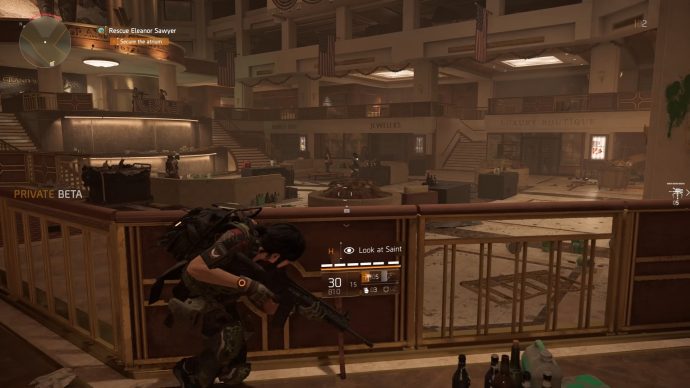 Once they’re all dead, collect any loot they’ve dropped and head up the stairs by the waypoint. Walking down that first corridor on the second floor, four enemies will flood in behind the barrier. This is the first instance of a berserked enemy. They have some armour and will consume a gas-like substance, before charging at you to attack at melee range. Focus on those enemies first if you can whenever you hear a scream, before turning your attention to other enemies.

Once they’re gone, carry on forward and upwards towards the Conference Centre. Inside are a bunch of pillars to hide behind, so make sure you do so as there are yet more enemies waiting for you, including another purple armoured enemy and two berserkers. Take them out first and any other enemies present. More will enter through the top right side, so try to keep an eye for them jumping out of the small office upstairs, as you can be flanked.

Head through to the other side and Kelso will tell you that she’s found an ammo stockpile she plans to detonate. The balcony area you’ll next come across has a bunch of enemies on various floors to the other side, and a pesky turret. Take the turret out first by detonating the explosive barrel next to it, then clean up any other enemies before heading into the elevator.

The screen will fade to black briefly before showing the lift prematurely stopped. Prise open the doors and head on through. In the ruins, there are a bunch of enemies and berserkers to take out. Keep an eye out for loot cases along the next corridor before entering through the double doors and up the stairs. 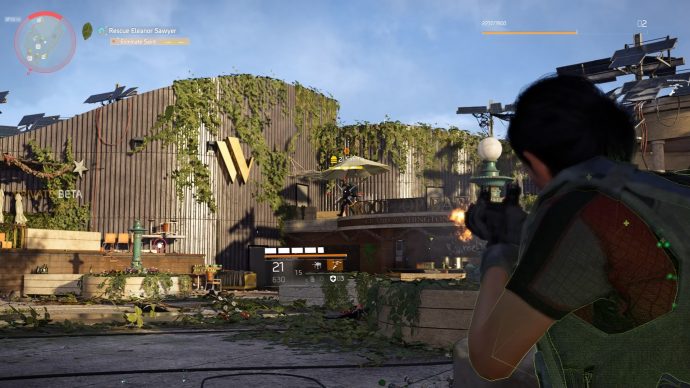 In the next room, you’re asked to destroy some debris. Kill the enemies, including the purple one first. The debris can be destroyed any way you see fit, though it has a large amount of HP for what it is. Round the next corner are a bunch of enemies, so take them out before reading the door to the security office - which has access to the rooftop.

Before leaping over the top, note that this next area has a message saying “No Respawn Zone”. You can fail the mission once you go over the top, though meeting up with Kelso is a bit more reassuring. The Rooftop bar is home to lots of enemies of all types - so take out foes until Saint shows up.

Saint is a special yellow type enemy. These indicate some form of legendary status, meaning they’re a lot tougher to take down. He has hefty armour on and his gun packs a punch, but he’s very slow. Manoeuvre around him and keep shooting his armour until it breaks, then go for the kill. Be aware though that other enemies can spawn during the fight, so keep an eye on the mini-map to the top right to see where confirmed enemies are. Once he’s dead, take out the rest of the enemies before heading in to save Eleanor. Kelso will tell you to secure the way out, so head into the lift that’s designated before heading onward, making sure you restock.

The lift opens out to the atrium, next to the turret, so man the turret to make mincemeat of the enemies flooding in via the right-hand side. Destroy the barricade for more enemies to enter, so take them out to complete the mission. Return to Odessa in Theatre for your next tasks and to unlock the Flare Gun for use in combat situations to request NPC backup. The game opens up a little bit at this point, but we'll stick with the story missions for now as you now need to Reactivate ISAC node & rescue Espinoza.