Most of Tom Clancy's The Division 2 might be friendly and cooperative, but the lawless Dark Zones are returning in the sequel, giving players a chance to fight each other over some of the game's best loot. It's not quite as cutthroat as it used to be, thankfully, thanks to Ubisoft Massive protecting starting areas with automated turrets and player stats being normalised for a fairer competition - most of the time. There are also three Dark Zones, each one emphasising a different style of play; long, mid or short range combat, respectively. Take a look at how it all works in the handy info-vid below.

As in the first game, when you and your friends first enter a Dark Zone, everyone's on the same side, and it behaves just like regular co-op with up to twelve players. You shoot and loot as standard, but with a twist. The very best gear is contaminated with toxic gunk, so you'll need to have it airlifted out and dry-cleaned before you can use it - that means no walking back out the way you came in. Find an evac point, call in a chopper and hope that no wandering stranger (or a friend being cheeky) decides to plug you in the back of the head and steal all your fancy loot for themselves.

The big difference from the first game is that stats will be normalised. While matchmaking works within your rough level bracket, your actual level and weapon stats are thrown out the window the moment you step into the Dark Zone. While your skill loadout will still function as normal, there won't be any over or under-powered players or enemies. Also, once a player goes rogue - through stealing or shooting other players - they'll be marked as a target by the automated guns at the entry points. Especially aggressive players get flagged as special targets for all, too.

If the idea of level scaling and not being able to one-shot people with your hideously min-maxed character build gets you down, don't worry. Every so often, one of the three Dark Zones will temporarily be flagged as Occupied. In this state, it's a more dangerous playground. There's no level scaling, no tracking of rogue state and the very best rewards available. This is intended to be the end-game PvP activity at launch. Extended Dark Zone play also gives you some special perks that, while not making you any more powerful, will provide more long-term rewards for Dark Zone play. 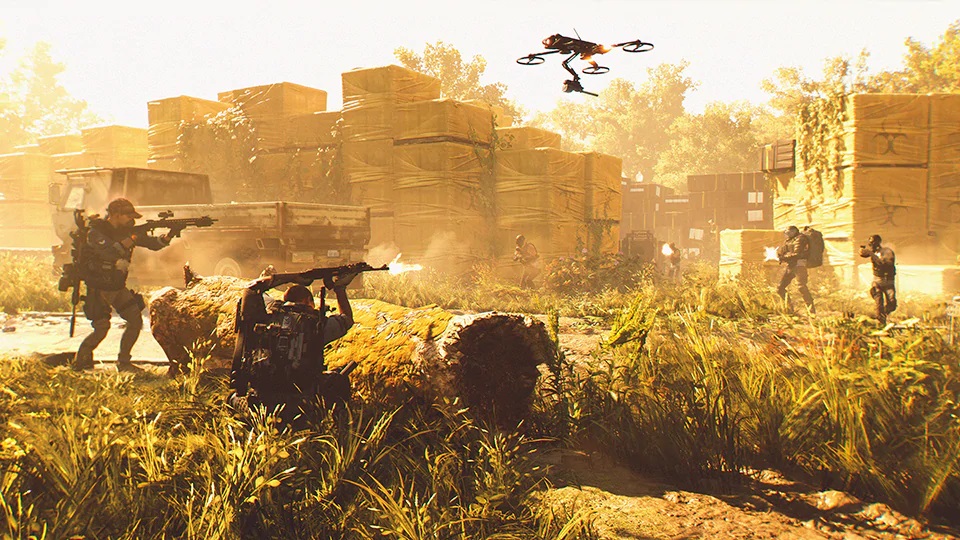 And if none of that appeals, there's some more traditional, balanced competitive modes kept completely separate from the story. Team deathmatch, king of the hill and similar stuff. It feels like Ubisoft are pushing to get people to try out the competitive side of the game a lot more this time, and removing many of the old barriers to entry. The old Dark Zone was an admittedly intimidating environment. Now, it seems more like a slightly higher-stakes extension of the regular shoot n' loot cycle. Plus, while you can shoot other Dark Zone players, you don't have to, if you don't want.

Tom Clancy's The Division 2 lands on March 15th via Uplay and the Epic Store, although no longer through Steam. A pre-order beta will be starting sooner on February 7th. Check out Dave Irwin’s summary of all things  The Division 2 here, which includes recommended system specs, and breakdowns of the various versions available. You can also see more about the Dark Zones on Ubi's official page here.