The Juggernaut has long been a formidable foe in Call of Duty games. In Warzone, where you have limited resources and respawns, they're downright terrifying. A good thing to realise early on is that while strong, Juggernauts are not invincible. With careful planning and the right tools, they can be taken down, giving you the chance to don the armour. Here's some top tips on killing a Juggernaut in Warzone.

In this Warzone guide:

There are several different versions of Juggernaut Royale, usually cycled in and out of Warzone as limited-time modes. Generally, they involve Juggernaut drops around the map, with players working to take them down and gain an advantage over other squads. There are many tips that apply to all of these variations, which I'll detail below.

Work as a team

One of the main things to avoid when facing down a Juggernaut is one-on-one fights. Unless you've got good cover and space to move around, you're unlikely to be able to chip away at their health in any meaningful way. Co-ordinate your attack with your team, and go in prepared.

Juggernauts have a lot of health and armour and as such, you should attack them with lots of firepower. Consider hitting a buy station before attacking, picking up a couple of airstrikes. You should also make sure you have plenty of armor yourself, and perhaps a munitions box to replenish ammo.

As with any other mode in Warzone, you should have a specific loadout for Juggernaut Royale. Launchers are a good bet, as are high-powered LMGs. For a look at what LMG to use, head to our best LMG guide. Thermite can do a lot of damage if you manage to stick the Juggernaut, and stun grenades can help slow them down. Consider your loadout carefully before heading into battle.

Vehicles are a great offensive option against Juggernauts, albeit a risky one. If you're in anything bigger than an ATV, you can run them down, dealing huge damage. Helicopters are also effective, as the blades can shred them with ease. Be aware though, that the minigun will do massive damage to your vehicles, so have teammates distract the Juggernaut while you drive in for the kill.

In many ways, snipers are the best gun to use against a Juggernaut. Not only can you keep your distance, headshots are pretty easy to land on these slow-moving targets. Some snipers even allow for explosive ammo, which is a great choice here. Make sure you mount up, and fire away from afar. For a look at what sniper to use in Warzone, head here. 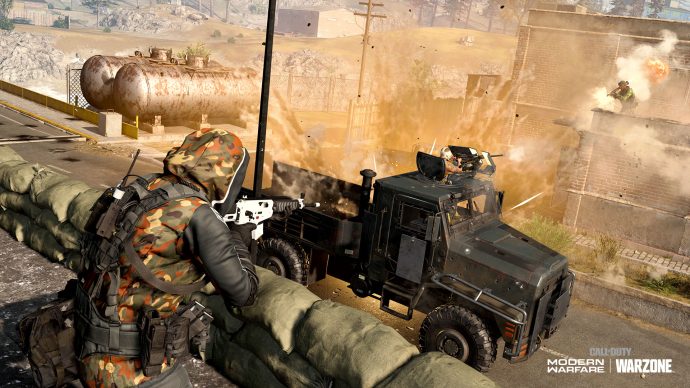 Given that the majority of Juggernaut-focused modes in Warzone are available for trios, you'll want to take out the rest of the team first before going for the big guy. Be aware of back-up dropping in, and always assume a Juggernaut has protection watching over them. A spotter scope is great for revealing any nearby foes.

Finally, it's worth bringing up the Juggourdnaut limited time mode. This one is usually live around Halloween, and takes place at night. Juggernauts will have flaming jack-o-lanterns for heads, but really there's not much to distinguish this spooky mode from the others. It does take place at night, so thermal scopes are a great way to up your game.

That's how to defeat a Juggernaut in Call of Duty: Warzone. For more on the game you should head over to our Season 6 weapons stats page. Elsewhere there's our look at how to win at Zombie Royale.