Overwatch [official site] aka the Shooter You Glance At Furtively, is getting its new Junkertown map next week and Blizzard have been showing it off some more in a trailer. You get some snippets of lore and backstory but it’s far more interesting to see the studio’s sound team, who visited a real ghost town to collect the creaking of a dilapidated cattle gate and the grinding noise from a rusty old crank, among other sound effects. Such as flies landing on the microphone. Watch below.

Apart from footage of sound guys antagonising floorboards and exploiting flies for their labour, the mentions of Junk Queen are interesting. Blizzard have a habit of setting up new heroes long before any real appearance. Doomfist, for instance, was in posters and surrounding story guff since the game’s release and eventually became a playable character. Similarly, Junk Queen now has her own posters and art appearing in-game, whereas she previously existed only as a voice. When I asked about Her Majesty at Gamescom, the developers avoided saying anything concrete. But I’ll eat my novelty Pharah helmet if they don’t make her a hero at some point. 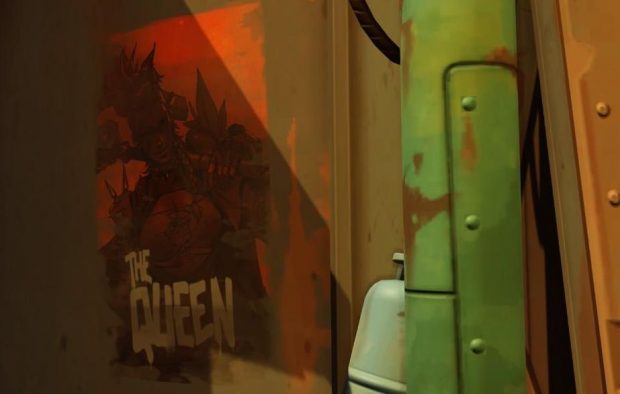 The map itself has been on the Public Test Realm for the past two weeks (the magical server where they trial new heroes and maps shortly before release) so it might be familiar to a lot of folks already. But it’s getting its proper release next Tuesday, September 19.

The almost-too-colourful hero shooter has been mixing things up recently – they’ve added a Deathmatch mode and big changes are due for Mercy, one of its principal healers (Kotaku have an interesting discussion about this on their most recent Fave This podcast but shhhh don’t tell the others at RPS I’ve given that to you). Since I last played they've added two new characters and a moon map. I'm almost afraid to go back.