The launch trailer for Cyberpunk 2077 hit yesterday ahead of tonight's launch, and it revealed more than was initially apparent. CD Projekt Red snuck a secret message into a single frame at the end of the trailer, see. They talked about their apprehension around launching a whole new thing after years of The Witcher, and their plans for what comes next. We already knew they were planning to release free DLC nuggets followed by proper expansions, but now we know to start expecting the freebies in "early 2021".

"We've mentioned before that expansions will be coming, and while we're not ready to talk specifics just yet, we will say that we've learned a lot from our work on both Hearts of Stone & Blood and Wine. Our planned expansions will take you even deeper into the world of Cyberpunk 2077, offering substantial, story-driven content that'll give you tough choices to make through impactful narratives that you won't soon forget," the hidden message said.

"But before we get there, we'll first be kicking off our free DLC program in early 2021. Just like with The Witcher 3, expect an assortment of free DLC packs to begin hitting Night City, dropping a bunch of cool stuff that'll inject even more life into the world of the dark future."

Those wee free Witcher 3 DLCs included new outfits for Geralt and NPCs, small new quests, and a New Game+ mode. As for the full expansions, cor, they were great and gave us a wonderful send-off so it's good to hear CDPR say they've learned from them.

While this new message doesn't mention it, CD Projekt are also planning some form of Cyberpunk 2077 multiplayer. We have no real clue what that might be. I hope not just deathmatch? Honestly, all I really want is to roll around Night City with my pals on bikes - a vehicle I hear the game tragically doesn't even have. CDPR, come on. My pitch to pique your interest: you could call 'em VMXs if you wanted. Like the protagonist, V, yeah? But a BMX? You're welcome to use that.

CD Projekt Red have hidden messages in trailers for Cyberpunk and The Witcher 3 before. Here's the rest of this latest one (click to embiggen): 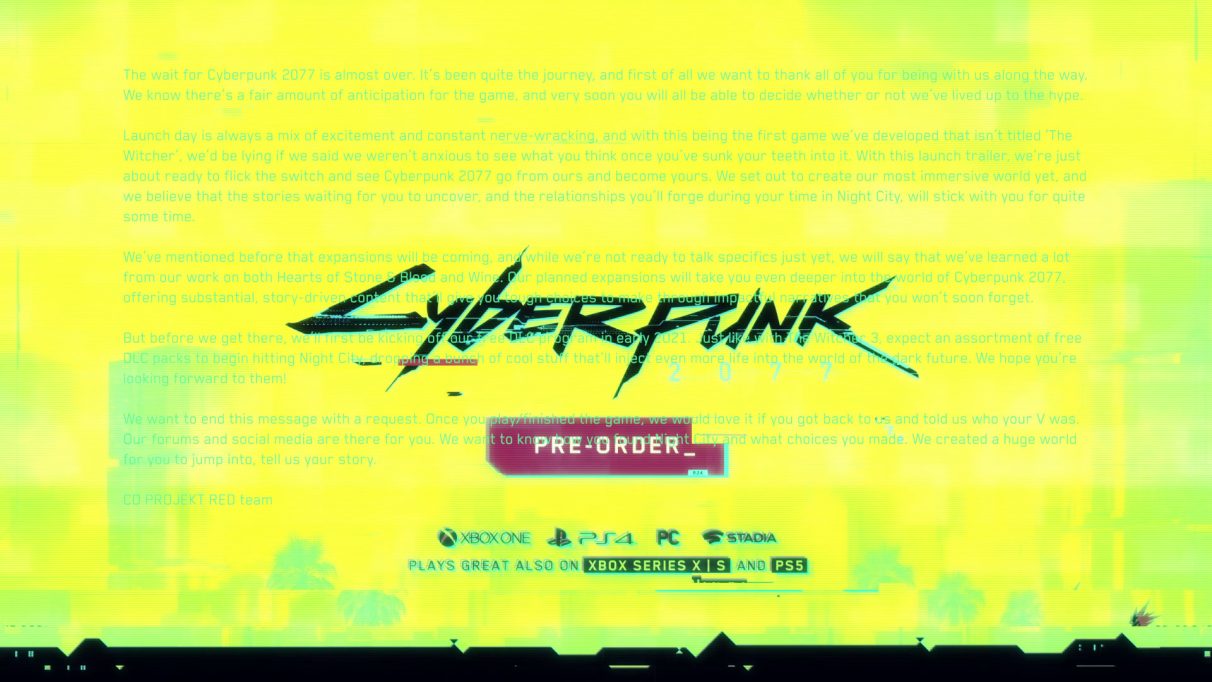