Behaviour Interactive ceased development on the brutal survival shooter, Deathgarden: Bloodharvest Friday after nearly half a year of triage. The makers of Dead By Daylight are punting the idea of a dour funeral, though. Instead, every feature the team have been working on was pushed out the door for players to enjoy. It's Deathgarden: Bloodharvest's wake, and everyone is invited because the game has now gone free-to-play.

The asymmetric multiplayer mad dash rebranded and relaunched in May of this year to deal with a host of problems, chief among them a dismal player rate in the double digits. When matchmaking requires one ferocious murderer and five other would-be survivors, those numbers are far from ideal. Bloodharvest brought a more sinister art style to match the grisly tone of hunting and killing your friends, rejiggered objectives, and smarter progression systems. According to Behaviour, the changes staunched the bleeding but ultimately failed to save any life.

"Witnessing the decreasing player base, we’ve been working on finding solutions: we sought advice, considered many different scenarios, looked at various solutions, but unfortunately, none of them would change the fate of this project," they said in Friday's letter.

"This project made us go through a roller coaster of emotions, from the first version to the reboot, and we take pride in what we’ve accomplished." 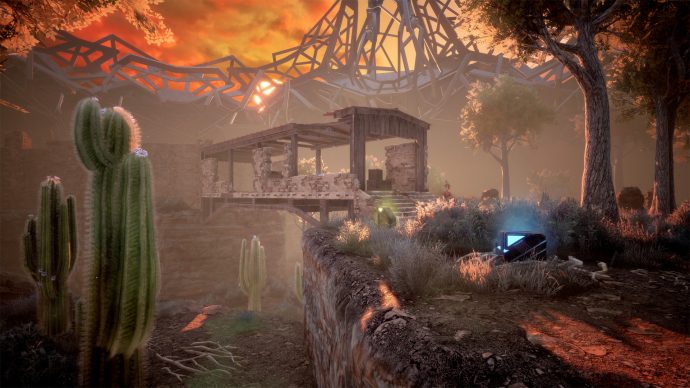 Behaviour note that the development team are moving to other in-house projects, both known and unannounced. Fans of Deathgarden can hopefully find something to love in whatever comes next. Fans of developers staying employed can also rest easy.

A final patch dropped alongside the dev's goodbye letter and brought the game out of early access. Three new maps, Legions Rest, Citadel, and Barren City, were added to the mix along with some skins and sundry cosmetics. Speaking of, all in-game goodies have had their price reduced to a single Blood, which sounds pretty damn cheap given how much of the red stuff gushes out each match. Current players and new adopters will also gain access to the soundtrack and lore book.

Behaviour will host a sunset livestream on Dec. 12 and invite the community to join the dev team in one last bout of gleeful murderhunting. Servers will stay online through the end of the year, but forecasts into 2020 look grim.

Prospective Bloodhunters can now check out the game for free on Steam. Drag a few friends along! Any good wake celebrates life's accomplishments, which in this case includes K/D ratios and gruesome take downs.