In the middle of a relatively straightforward season of straightforward content, Destiny 2 has quietly snuck in a big puzzle that has sent players exploring the Corridors of Time. We last went through there to rescue our old pal Saint-14 from his fated death, and now I'm starting to wonder if changing history was the best idea. (Of course it was: he's a great mate.) Where does this lead to? Dunno! What will we earn? It's a secret! But it is quite fun for Destiny to get back to secret puzzles that aren't solved instantly. I'm enjoying seeing players working together to chase leads.

Tuesday is update day for Destiny 2, though nothing is on the calendar for this week and Bungie haven't said they added anything. But they did. Visit Osiris near his time machine on Mercury for a new quest, 'Exploring the Corridors of Time'.

"You charted the Corridors of Time and succeeded where Osiris failed," Saint tells us in the quest description. "What else might you find in those temporal halls?" If you want to find it all out for yourself, stop reading now.

So back into the Corridors went a stream of Guardians, wandering aimlessly until someone noticed that this season's Obelisks have started displaying symbols. 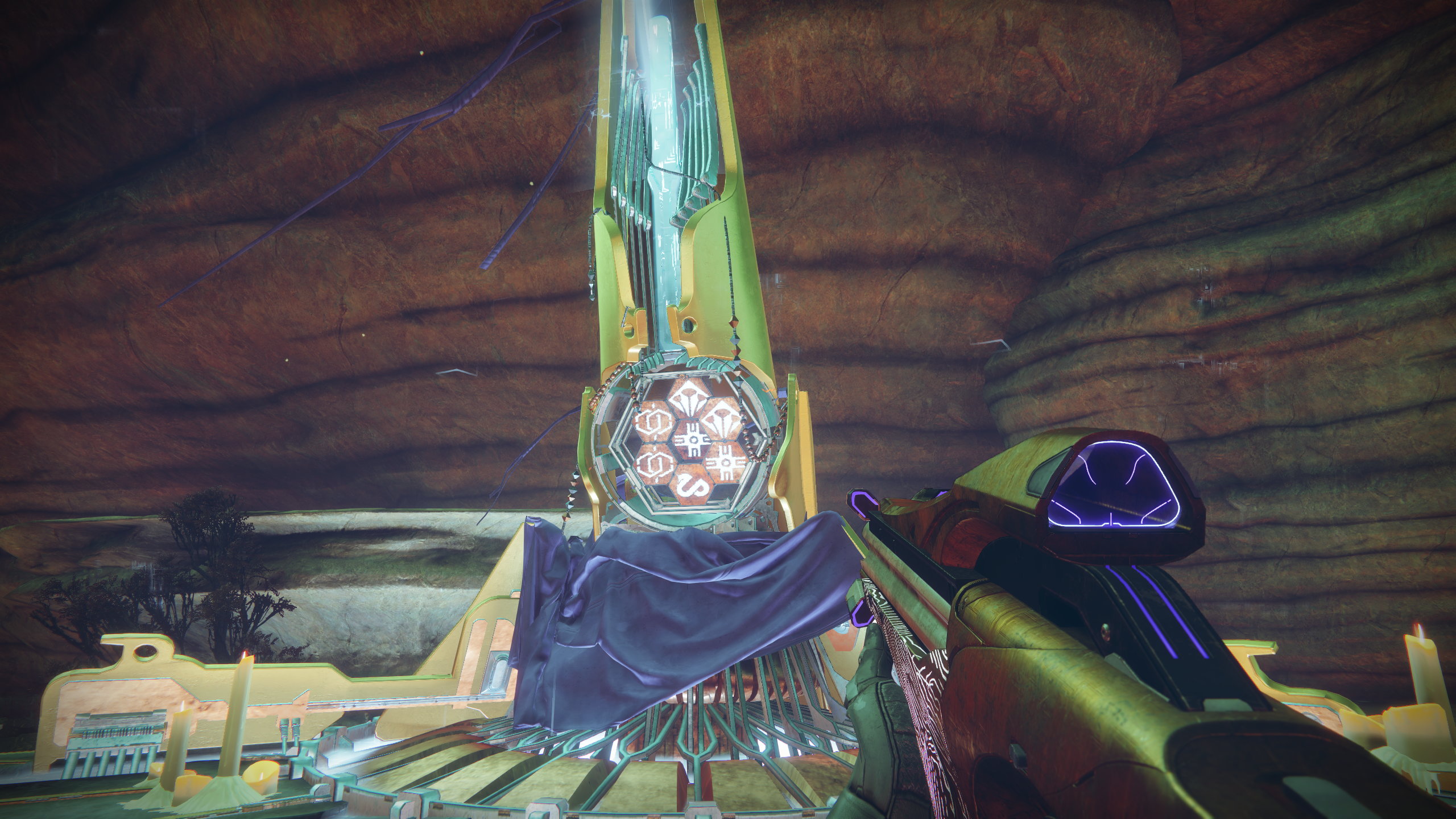 These symbols correlate to symbols on pillars near portals in the Corridors, giving a little map of a route to reach a particular timeline (read them clockwise starting at 1). The symbols have changed every hour, revealing more routes. So far, every timeline players have charted leads to the same place: an altar tomb, seemingly of a revered Guardian. 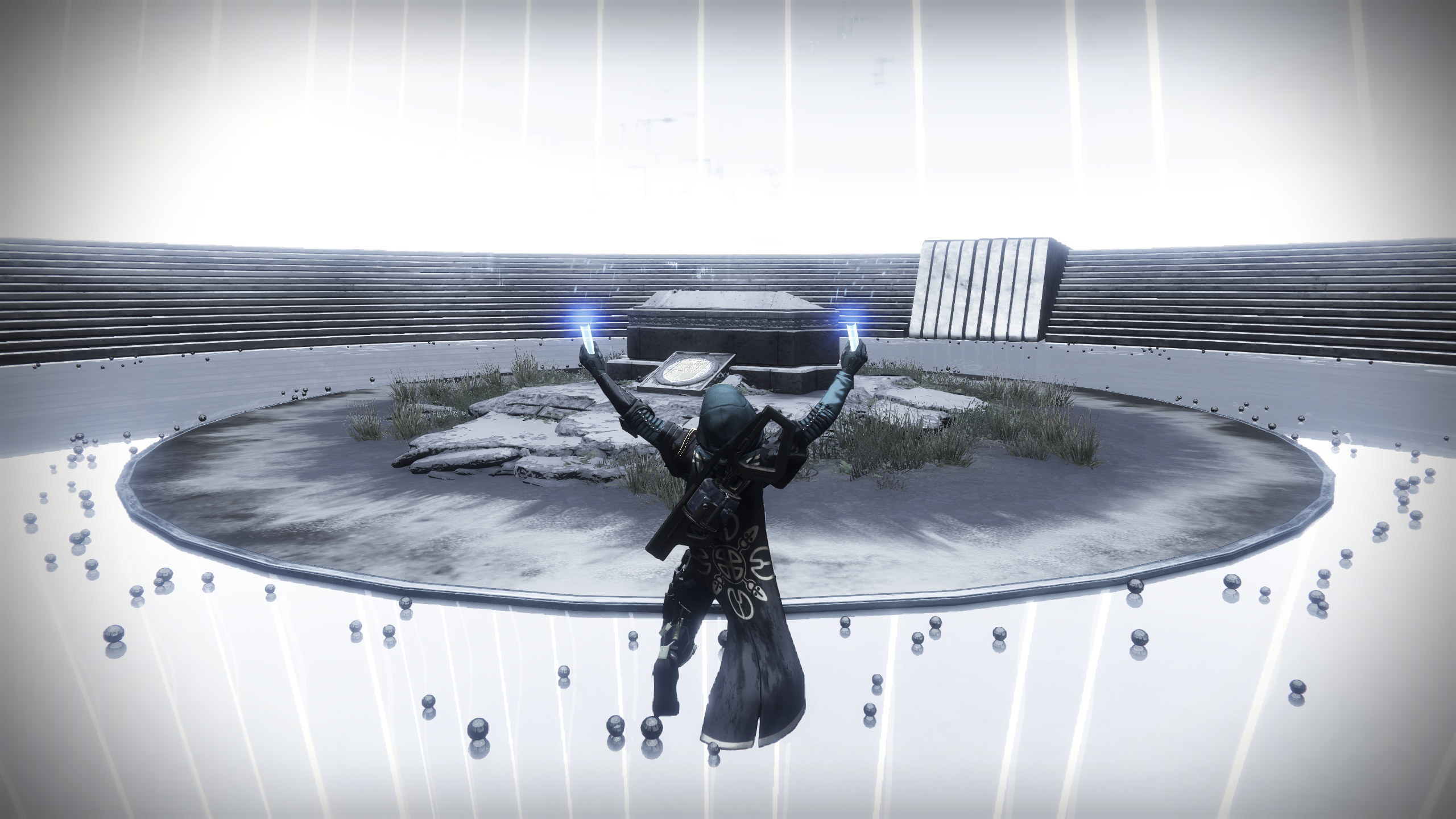 This is not the tomb where we once found Saint-14, drained of his Light and killed after centuries lost in time fighting the Vex. This looks like a slice of the real world cut out of time. We can't get too close or we'll be teleported away.

If you want to explore the Corridors, your reward at each endpoint is a chapter of a new lorebook and you can get a new emblem too. Follow this guide for all of those.

I've disliked Destiny's complex puzzles when they've locked out something new I had been anticipating (like the puzzle to open Bergusia Forge) but as something coming wholly as a surprise, heck yeah, let's go.

This is only the first layer of the puzzle, mind. The tomb rooms also reveal more symbols and patterns that players are amassing and poring over, trying to find patterns and the next step. What happens next, we do not know.

Here comes a second spoiler warning: some players who've been digging around in the game's data files, uncovering snippets before they were added to the game, have some ideas.

Honestly, stop reading at this point if you want to enjoy the season as it unfolds and discover everything in its natural context. That would be the sensible decision.

Some yet-unused dialogue dug out of data files seems to be Saint-14 reading our eulogy. He talks about marking the grave with a sword he once gave us, and there's a sword atop this mystery grave alright. This could be a coincidence but seems a clear sign of where this quest is headed. You can listen to that hear if you really want:

Osiris once sent copies of himself to explore the Corridors and find a timeline where Saint survived, but could not. We managed to find a route which led to Saint at just the right time. Now every timeline we explore is leading to our own grave. That seems bad. Saint's eulogy seems like it's written for a scene where we overhear across time and fight on after he implores us to once again overcome impossible odds, so I imagine we'll be fine in the end. But what might that mean for Saint? And when do I get this cool sword?

If you want to follow attempts to solve the new mystery, Raidsecrets on Reddit is going full-speed. Secret-solving streamers like Gladd are broadcasting their attempts too, though it seems they're finally turning in for the night. Bring on the European shift!