There are few games more influential on the JRPG genre than the Dragon Quest series. Classic all-ages tales of swords and sorcery adventure, held together with traditional turn-based combat in a world of charming monster & character designs from Dragon Ball artist Akira Toriyama.

While a pair of spinoffs have made the jump already (Dragon Quest Heroes 1 & 2, which I still insist are two of the best Dynasty Warriors-derivatives), today's announcement from Square Enix marks the first time in the series' 32-year history that a core game has come to PC. Dragon Quest XI: Echoes of An Elusive Age is due out this September 4th.

On top of a more traditional trailer introducing the cast, Square-Enix have also released the chunk of gameplay footage above, opening in classic Dragon Quest fashion: Wandering around a field, bopping the most adorable slimes you ever will see.

It all looks rather lovely, and there are no random encounters, just visible wandering monster-markers on the overworld. While on horseback you can gallop to knock enemies out of the way, should you not feel up to fighting them. Most interesting, though, is that there are seemingly two different combat engines which you can switch between at will.

The gameplay footage opens using the Classic Combat mode, where you just pick your attacks from a menu and assign targets, but after switching to Free-Form Fighting mode, the player and enemies gain the ability to roam in real-time, although combat actions still seem to be turn-based. I can imagine this looking messy but impressive once a full party has been assembled. 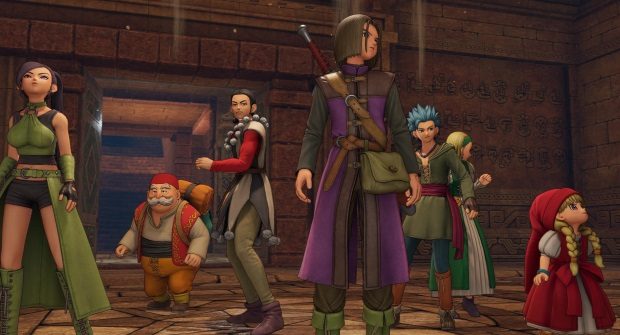 Dragon Quest's appeal has always been in its comfortable nature. It's so straightforward, it's almost silly, like a big fluffy videogame sweater that you've had for donkey's years. Sure, it may be a bit stretched and faded, but nothing else fits quite right. These aren't especially intense or demanding games, but they are satisfying.

While the series has evolved over time, even initially strange decisions (such as going with all-British voice casts as of Dragon Quest 8 onwards, including cockney barbarians and a long line of Welsh healers) have become just part of the experience. While Final Fantasy has reinvented itself a half-dozen times over, Dragon Quest remains unmistakably Dragon Quest at a glance, no matter how advanced the technology supporting it becomes.

Dragon Quest XI will be arriving on PC this September 4th, launching alongside the PS4 version. It's already listed on Steam, and is priced at £40/$60 for preorders.